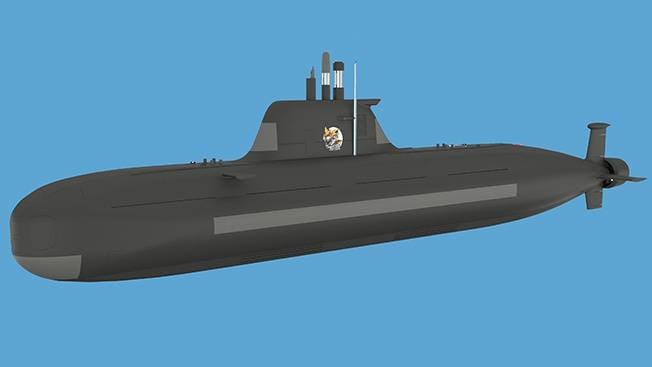 In recent years, the St. Petersburg Maritime Bureau of Mechanical Engineering (SPMBM) "Malachite" has been working on the direction of small coastal submarines. Several projects of this kind are offered to customers, and the newest of them is P-750B Serval. In this project, new technical solutions and principles are being implemented.

Pictures from the exhibition

The concept project of the P-750B non-nuclear submarine, which is a development of the earlier P-750, was first presented at the domestic military-technical exhibitions in 2019. Their visitors were shown a model of a promising submarine and technical and advertising materials. At the future forum "Army-2020" SPMBM "Malachite" plans to present a new detailed model of the submarine, better showing the features of the project.

Within the framework of the exhibitions, the organization-developer announced the main features of the future "Serval" and its approximate characteristics. It was announced that the new boat will receive an air-independent power plant (VNEU). With its help, it is proposed to significantly increase the duration of being under water. A modular architecture of weapons is also proposed, expanding the range of tasks to be solved.

A few days ago, the weekly "Zvezda" published an interview with the general director of "Malakhit" Vladimir Dorofeev, the topic of which was a new project of the non-nuclear submarine P-750B. The head of the design organization clarified some of the known information, as well as revealed new details and plans.

The Serval concept proposes the construction of a submarine 65,5 m long and 7 m wide with a displacement of approx. 1450 t. One and a half-hull construction was used; a light hull forms the entire bow of the ship. The strong steel hull must ensure submersion to a depth of 300 m. The hull is divided into compartments for different purposes. In particular, the feed volumes are completely given over to the power plant of the original architecture.

Exhibition layout
The power plant includes two 400 kW gas turbine engines connected to generators, as well as a single-shaft system with a 2500 kW propeller motor. When driving on the surface of a gas turbine engine, air is obtained from the atmosphere, and the exhaust gases are thrown out. In the submerged position, the motors switch to a closed cycle.

To operate underwater, gas turbine engines use oxygen stored on board the boat in liquid form in insulated containers. Earlier it was reported that the engine exhaust gases are also liquefied and do not go beyond the submarine. In a recent interview, the general director of Malakhit pointed out the possibility of obtaining oxygen from a gas mixture with its subsequent supply to the engine.

Using only batteries, the P-750B submarine will be able to stay under water for three days. The use of the VNEU of the proposed type allows this period to be increased to 30 days. In addition, high speed and maneuverability characteristics are provided. Full submerged speed will reach 18 knots. Continuous range at VNEU - 1200 miles. The total range is 4300 miles.

The Serval project offers a modular weapons and payload architecture. The necessary units are located in the bow of the boat, under the light hull. There can be placed 533-mm torpedo tubes, self-defense equipment, unmanned vehicles for various purposes, etc. It is possible to replace such a payload directly in preparation for going to sea.

The presence of several torpedo tubes allows the use of the entire range of domestic mine and torpedo weapons. It is also possible to integrate the Kalibr missile system in the version for submarines. Thus, "Serval" will be able to work on various surface and coastal targets, incl. at a great distance. 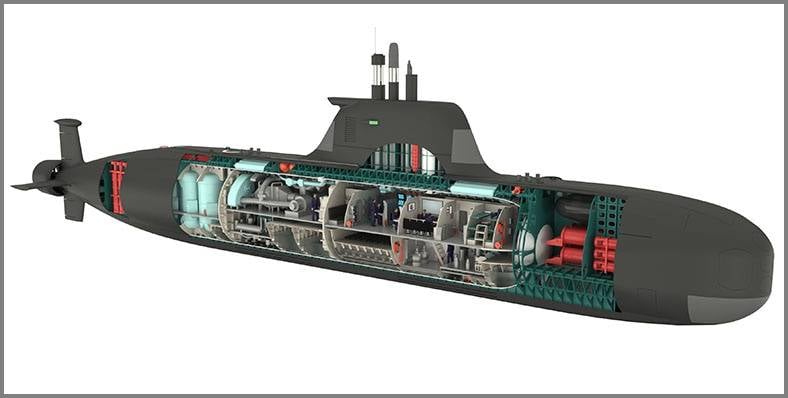 Boat cutaway
An interesting feature of the P-750B is the presence of an airlock, also located in the bow. With its help, the submarine will be able to land and receive up to six combat swimmers simultaneously. At the same time, the habitable compartments will allow up to 16 people to be taken on board and delivered to the place of solving problems.

The Serval boat should use modern general ship systems, controls, etc. Due to the high automation of processes, it is possible to reduce the crew to 18-20 people. Accordingly, the volumes for their placement are reduced, which makes it possible to optimize the design of the submarine as a whole. It is envisaged to reduce the requirements for basing points. Deployment of P-750B and provision of their service is possible on existing bases fleet.

Small submarines of the P-750B project, like the previous developments of the SPMBM "Malakhit", are intended to perform a variety of tasks in the coastal zone. They are capable of patrolling and fighting enemy surface or submarine ships in order to protect sea borders. It is possible to lay sea mines, conduct reconnaissance, as well as ensure the work of sabotage and reconnaissance groups.

Its small size and displacement will allow the Serval to move and fight in shallow water and in narrow areas. This significantly increases the possible areas of operation and provides significant advantages over larger submarines. Low demands on the basing points will simplify the transfer and deployment in new areas.

VNEU of a new design makes the submarine quieter than ships with other power plants. In addition, the proposed system is safer - there is no hydrogen in its circuits, which sharply reduces risks. It is planned to provide an increased resource of the units, due to which the cost of operation will decrease.

In a recent interview, the general director of Malakhit spoke about the existence of a working prototype VNEU for Serval. This product works on a stand, is undergoing experiments and research. How soon it will be brought to a full-fledged workable sample is not specified. 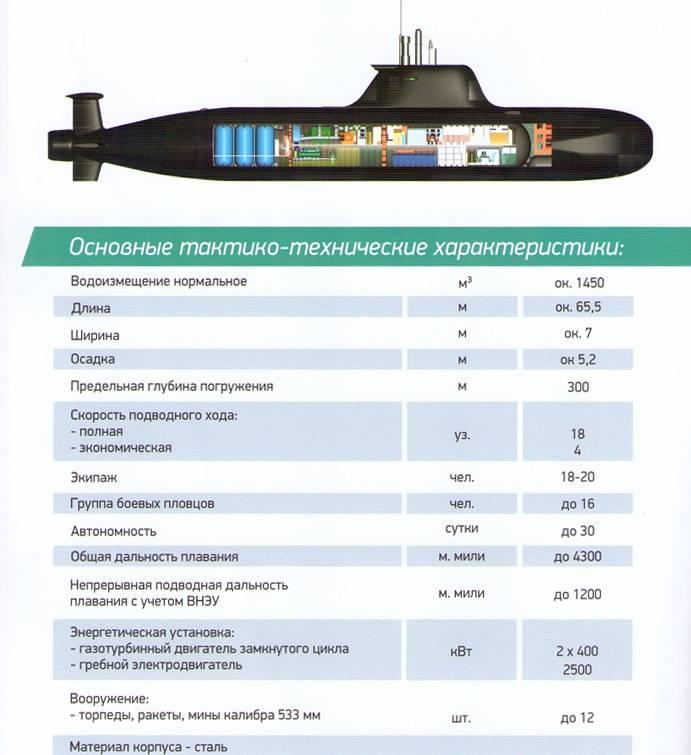 The project itself of the P-750B submarine so far exists only at the level of concept and general solutions. The further fate of this development depends on the potential customer represented by the Ministry of Defense. In this regard, the timing of the appearance of the finished project and the entry of the submarine into operation remain unknown.

The military department has not yet commented on the Serval project - although an alternative project of a non-nuclear submarine with VNEU from the Rubin Central Design Bureau MT is already being implemented on his order. Perhaps the new concept and the prototype VNEU from SPMBM "Malachite" will also interest the military, which will allow the two projects to move to a new stage.

Over time, "Serval" or other small submarines from "Malachite" are able to attract the attention of foreign countries. The improved performance characteristics associated with VNEU can become an important competitive advantage in the context of export contracts.

The proposed concept of the P-750B non-nuclear submarine is of great interest, at least from a technical point of view. This project offers a number of important and promising solutions of various kinds that can positively affect the development of the fleet. Submarines of the "Serval" type may become the most important component of the Russian Navy in the distant future.

It should be admitted that not all interesting and promising projects reach practical implementation. The fate of the P-750B has not yet been determined, and the main customer has so far refrained from making statements on this topic. A promising concept from SPMBM "Malachite" may not receive development and will not reach construction and service.

However, even in this case, the bureau will be able to carry out research work on air-independent power plants and other components of small non-nuclear boats. This will provide our shipbuilders with new technologies suitable for use in real projects of the future. Time will tell whether Serval will reach construction or will it be limited only to technologies.