Research vessels pr. 123. On the eve of construction

General appearance of the NIS pr. 123. Graphics from the Central Design Bureau "Lazurit"

Within the framework of the national project "Science", it is planned to build and commission two new multifunctional research vessels (NIS). Not so long ago, within the framework of this program, the Ministry of Education and Science chose project 123 from the Lazurit Central Design Bureau for implementation. The laying of two NISs is planned for next year, and delivery is expected no later than 2024.

The need to build new NISs for the Ministry of Education and Science was announced in early September 2018. First, the Presidium of the Presidium of the Presidential Council for Strategic Development and National Projects approved plans for Science. Among other things, they provided for the allocation of 28 billion rubles for the construction of promising NIS. Just a few days later, they talked about the need to create two such vessels.

By the end of 2018, the Institute of Oceanology named after P.P. Shirshov RAS, which is the operator of domestic R / V, has formed a technical assignment for a promising project. Subsequently, there were disputes around this TK; there were proposals to abandon it in favor of alternative concepts. 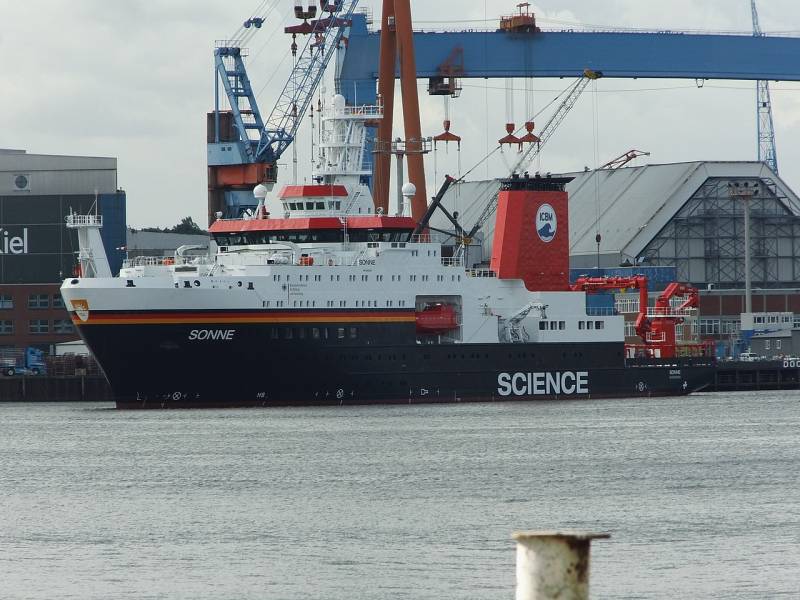 The German R / V Sonne is a possible "sample" for the Russian project. Photo Wikimedia Commons
This decision did not suit other participants in the competition. It was argued that the customer was under pressure from lobbyists and chose not the best project from the not the best developer. So, USC was going to file a complaint with the FAS to verify the results. However, there were no new messages on this score - and the results of the competition remained in force.

In mid-June 2016, the Ministry of Education and Science announced the completion of design work on the new NIS. The project fully complies with the TOR and was approved by the supervisory authorities, as well as approved by the customer. Preparations for construction began.

CDB Lazurit is a part of the Far East Shipbuilding and Ship Repair Center (DTSSS), owned by Rosneft. In this regard, as early as last autumn, there were suggestions about a possible executor of the order for the construction of two NIS. These versions came true: at the end of June 2020, the Zvezda Shipbuilding Complex from the DTSSS received an order for work.

According to the latest data, preparations are now underway for future construction. The laying of two vessels is planned for next year. Construction and testing will take several years, but all work should be completed by the end of 2024. 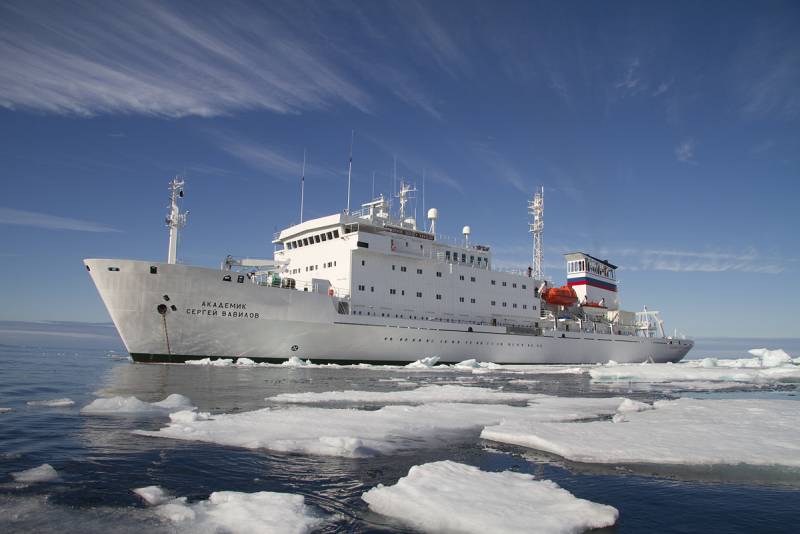 To date, the approximate appearance of future NIS pr. 123 and some information about their tasks and equipment has been published. At the same time, the main characteristics, the exact composition of the equipment, etc. have not yet been announced. Details of this kind will probably appear later.

Earlier, the media mentioned the development of a domestic project 123 based on the German R / V Sonne, which was put into operation in 2014. The available materials about R / V from Lazurit show a certain similarity in concepts, structures and components - but we are not talking about a complete copy.

The dimensions and displacement of the new NIS are unknown. It is envisaged to build ships with an "ocean" hull, which would ensure operation on first-year ice of limited thickness. During the development of the hull, measures were taken to reduce the negative impact of the airflow on the hydroacoustic systems.

A developed superstructure is placed on the hull. The tank contains part of the premises, on top of it there is a platform for helicopters or unmanned aerial vehicles. The bridge is located behind the site. The aft deck is equipped with lifting equipment and can be used to carry various loads. 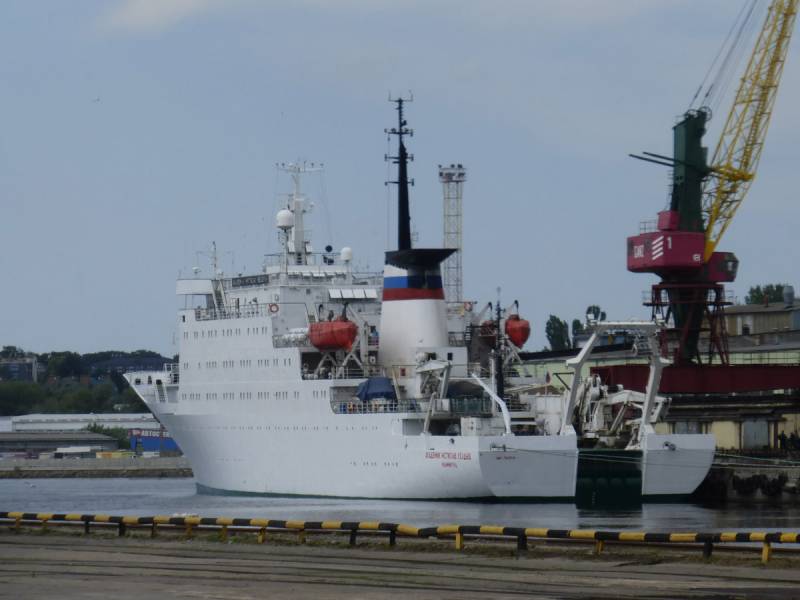 "Academician Mstislav Keldysh". Photo CMEI / rv.ocean.ru
Diesel-electric power plant with rudder propellers and automatic control system will provide both movement and work in one place without displacement. It is also tasked with providing energy to all scientific equipment on board.

With the participation of several research and design organizations for NIS pr. 123, 11 laboratories for various purposes were developed, incl. two "wet" areas up to 80 sq.m. With their help, ships will be able to carry out hydrophysical, meteorological, biological and other research. The complex of scientific equipment will include hydroacoustic and other onboard facilities, an unmanned underwater vehicle, etc.

Despite the lack of information, pr. 123 has already been criticized. Even at the stage of the competition, there were disputes and accusations. Then they talked about organizational and other problems. Problems with the finalization of the project are also expected.

Last year it was noted in the media and in the statements of the tender participants that the domestic industry did not have experience in the development and construction of modern RVs. In addition, the Lazurit Central Design Bureau has never been involved in the design of such vessels. These circumstances were supposed to threaten the program. 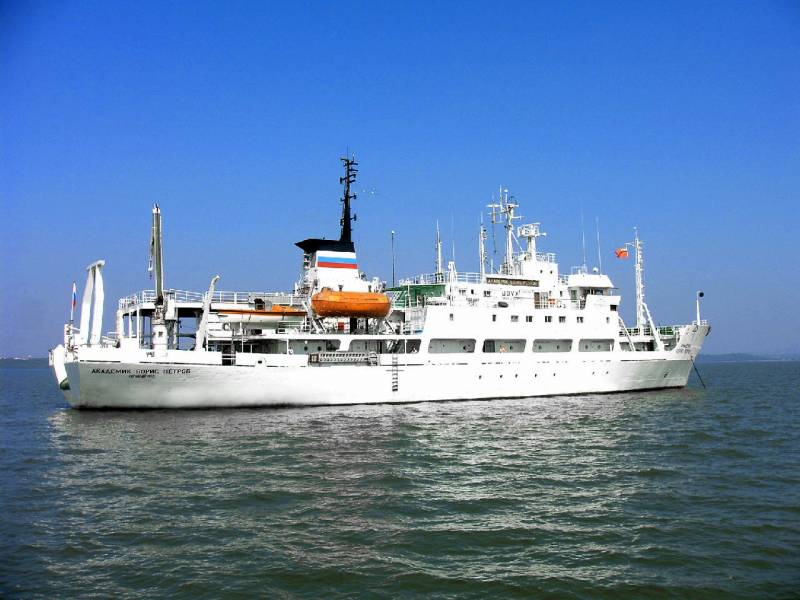 "Academician Boris Petrov". Photo CMEI / rv.ocean.ru
The minimum time is allocated for the construction of two NIS, which is why the work on the two orders will actually be carried out in parallel, at short intervals. Accordingly, there is no opportunity to test and master the lead vessel, and build the second according to an improved design.

Center for Marine Expeditionary Research (CMEI), which is part of the Institute of Oceanology. Shirshova, has fleet of five research vessels based in Kaliningrad. All of them were built in Finland in the eighties. Various equipment on board allows for a wide range of research in almost any area of ​​the oceans.

The topical national project "Science" provides for the allocation of 9 billion rubles. to modernize the existing NIS fleet. OK. RUB 1,5 billion annually will be spent on the operation of ships and the organization of expeditions. Until 2024, the research fleet will have to carry out approx. 250 expeditions on the high seas.

By 2024, the CMEI fleet will be replenished with two new multifunctional research vessels with modern target equipment. They will increase the overall potential of the scientific fleet and allow for new research - incl. in the interests of economic development.

The project of research vessels is already ready, and their construction will start next year. The Ministry of Education and Science expects the successful completion of the work on time and the timely start of operation of the new R / V. It is possible that certain problems may arise with different consequences, but on the whole the situation looks optimistic. In the coming years, the Russian scientific fleet will be renewed - both by modernizing existing vessels and by building new ones.