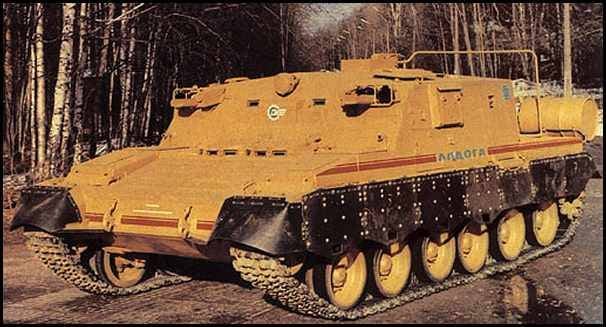 One of the Ladoga cars. Attention should be paid to the characteristic color. Photo Alternathistory.com

In the early eighties KB-3 of the Leningrad Kirov plant under the leadership of V.I. Mironov has developed a highly protected vehicle (VTS) "Ladoga". This product was intended for use as a transport, command post or reconnaissance vehicle capable of operating in contaminated areas. Resistance to radiation, chemical or biological threats was provided by a number of technical solutions.

The basis for the future "Ladoga" was the chassis of the main combat tank T-80, which entered serial production by the beginning of the eighties. The tower and all equipment of the fighting compartment were removed from the MBT. A closed, sealed superstructure with a full-fledged passenger compartment was placed in the vacant space. For access inside, a hatch was provided on the left side, equipped with a folding ladder. The protected volume housed two crew members and four passengers.

The tank chassis retained the standard GTD-1250 gas turbine engine with a capacity of 1250 hp. According to some reports, some of the small-scale military-technical cooperation were equipped with a less powerful GTE-1000. The main engine was supplemented with an auxiliary power unit in the form of a gas turbine engine with an 18 kW generator. The chassis was not reworked and retained six torsion-bar suspension rollers per side.

Two workplaces were organized under the frontal sheet of the hull, for the driver and commander. They received a set of periscopes for driving and observation. Also, several viewing devices of various kinds were placed on the superstructure. Provided for the installation of a lifting device with a video camera. There were means of internal and external communication. The PTS was equipped with a set of sensors to monitor various environmental parameters. 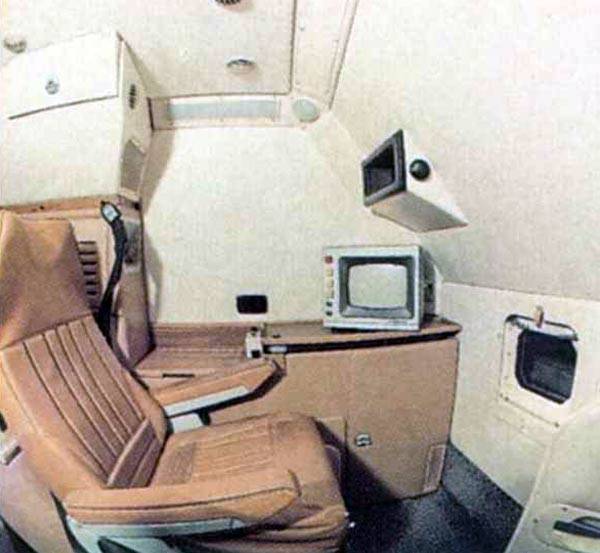 One of the passenger seats in the crew compartment. Photo Twitter.com/skylancer7441
In terms of the dimensions of the VTS "Ladoga" was similar to a base tank. Due to the lack of a cannon, the overall length decreased, but the superstructure led to the preservation of the same height. The curb weight reached 42 tons. The running characteristics remained at the level of the T-80.

In accordance with the terms of reference, "Ladoga" was supposed to work in conditions of radiation, chemical and biological contamination and to protect the crew from all these threats. These tasks were solved by using already known and well-mastered solutions, as well as using several new components.

First of all, security was ensured by the "traditional" collective anti-nuclear defense system. VTS carried a filtering unit for cleaning outboard air before supplying it to the habitable volume. In especially difficult situations, "Ladoga" could switch to autonomous work using compressed air from a cylinder installed at the stern of the superstructure. The purified air supply was complemented by an air conditioning system that improved working conditions.

"Passive" means made a great contribution to the overall level of protection. So, the maximum sealing of the habitable compartment was ensured. To reduce possible leaks, the minimum required set of hatches and openings is used. Periscopes and cameras on the hatches and superstructure became the main means of vision, while the hatches had to remain closed most of the time. In addition, the inner surfaces of the habitable compartment were lined with boron-based anti-neutron lining. 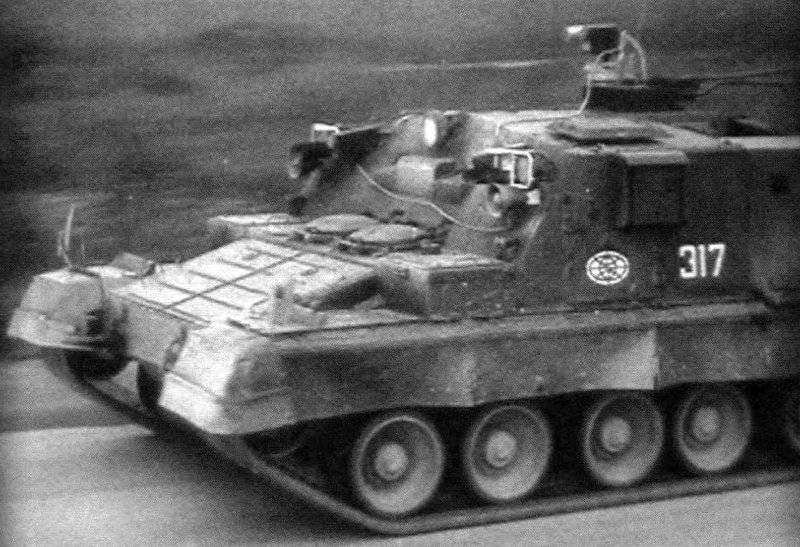 MTC "Ladoga" in the ChNPP zone. Photo Alternathistory.com
The main and auxiliary power units of Ladoga were made on the basis of gas turbine engines, which made it possible to reduce the risks during operation and maintenance. The GTD-1000/1250 engine was equipped with a highly efficient air cleaner capable of reducing the dust concentration at the inlet by tens of times. In the engine itself, vibration means were provided for removing dust from the blades and other parts. After such shaking off, the dust flew out with reactive gases.

An air purifier without "barrier" parts did not accumulate hazardous substances. During operation, the gas turbine engine actually deactivated itself and threw contaminants outside. Accordingly, further cleaning of equipment was simplified, as well as risks for technical personnel were reduced.

In the context of maintenance and decontamination / degassing, the characteristic exterior of the armored vehicle should also be noted. It consisted mainly of flat surfaces with the minimum required set of small parts. This greatly simplified flushing and cleaning from contamination. The only exception was the undercarriage - but this is a common feature of any tracked vehicle.

Sea trials of the VTS "Ladoga" were carried out in different regions of the USSR with different conditions and climate. The car was checked in the Far North and in the Kara-Kum desert, the tracks in the Kopet-Dag and Tien Shan mountains were successfully completed. In all conditions, the power plant worked with the required characteristics, and the protective equipment coped with its work. The crew and passengers were protected from the effects of seaward dust, low or high temperatures, etc. 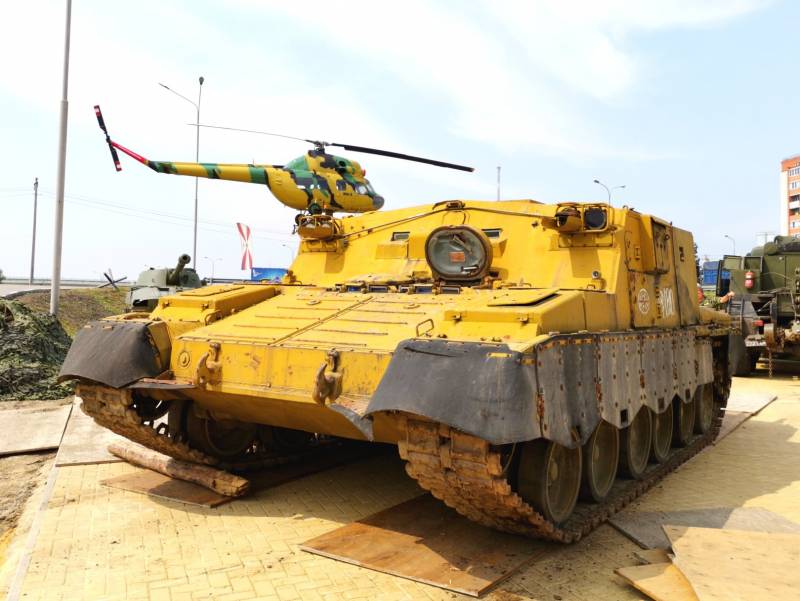 Museum "Ladoga" in the park "Patriot", 2019 Photo Vk.com/sssr_hotel
However, Ladoga showed its full potential only after several years. On May 3, 1986, military-technical cooperation with the number "317" was taken by special flight from Leningrad to Kiev. A special detachment was formed, which was to operate and maintain the car. In addition to the crew, it included dosimetrists, doctors, sanitation specialists and a food service.

On May 4, the Ladoga made its way to Chernobyl, where it was to conduct reconnaissance, collect data, transport specialists and solve other problems in conditions of real radiation contamination. The first trip to the area of ​​the destroyed power unit took place on May 5. This time, the military-technical cooperation passed through areas with a radiation level of up to 1000 roentgens per hour, but there was no threat to people in the protected compartment. After departure, decontamination was required. Later, every few days "Ladoga" went to certain routes.

The trips lasted for several hours. In the early stages of the operation, the Ladoga military-technical cooperation took specialists and leaders of the rescue operation to the scene of the accident to familiarize themselves with the situation. Later, the main work consisted of surveying the area, filming and collecting environmental parameters. The last trips of this kind took place in early September. 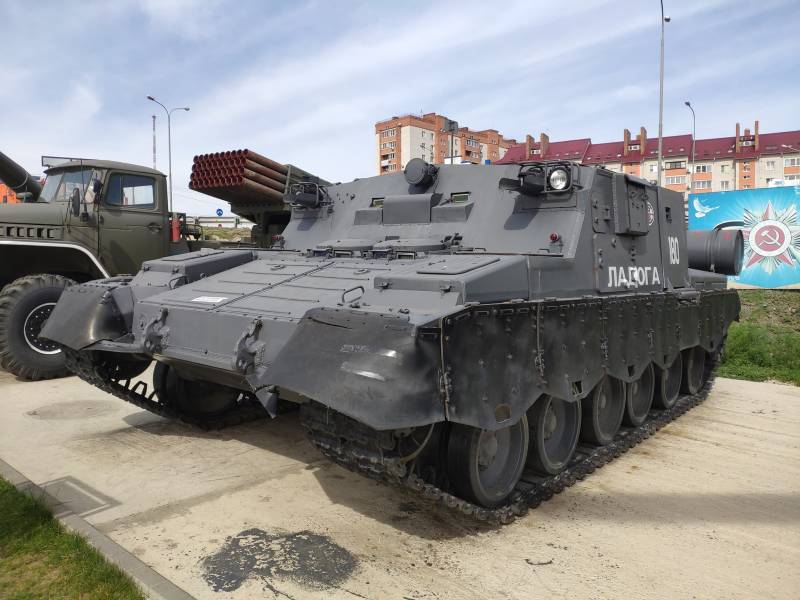 The same car after restoration. Photo Vitalykuzmin.net
For four months of work in the Chernobyl NPP zone, the highly protected Ladoga vehicle passed approx. 4300 km in different parts of the terrain. With its help, both remote affected areas and the directly destroyed power unit were studied - right down to the turbine hall. The maximum radiation level during field trips is 2500 R / h. In all cases, the PTS protected the crew, although decontamination was required upon return.

In practice, it was confirmed that the HFD can handle high loads, but in some situations a transition to a "closed cycle" of air supply is required. Radiation protection equipment generally corresponded to the harsh Chernobyl conditions. The gas turbine engine showed greater safety in comparison with the piston engine.

On September 14, after another treatment, "Ladoga" No. 317 was sent to Leningrad. The armored vehicle returned to service and was used for a long time as a research platform.

MTC "Ladoga" was built in small series. According to various sources, no more than 5-10 of these machines were assembled in the eighties. The details of their operation, with the exception of MTC # 317, remain unknown. It is believed that such equipment is now considered as a special transport for the highest command personnel in the event of a nuclear war. 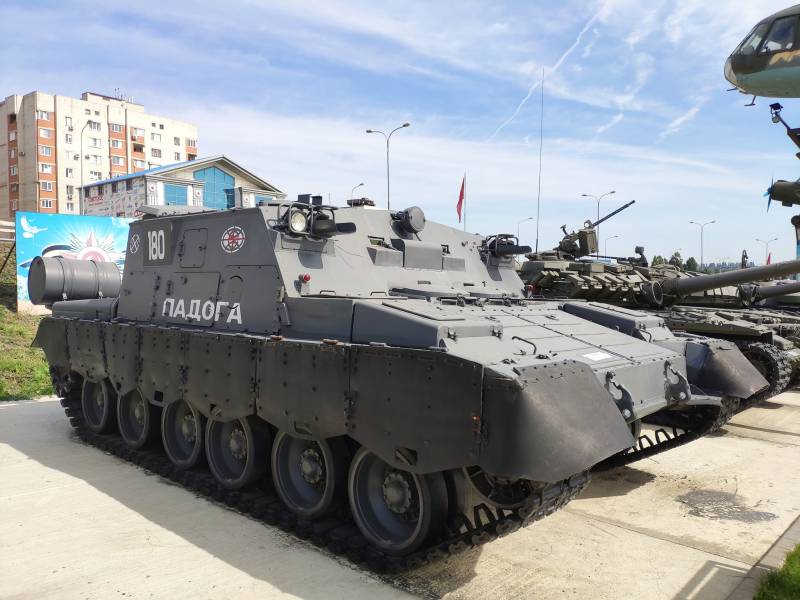 View from a different angle. Photo Vitalykuzmin.net
Probably, the protected equipment has already developed a resource, and they are gradually abandoning it. So, one sample has by now been written off and transferred to the museum. Now he can be seen in the Patriot park in the city of Kamensk-Shakhtinsky (Rostov region).

The developers of Ladoga were faced with very interesting, but difficult tasks. KB-3 successfully completed the assigned task. It was able to find the optimal combination of already known and new components and technologies, which ensured the maximum level of protection of the crew and technical personnel from the main threats.

For obvious reasons, the Ladoga military-technical cooperation did not become widespread and did not find wide application in the army or in civilian structures. However, with its help, it was possible to work out and test in practice a number of necessary technologies and the appearance of special equipment in general. Perhaps the experience of this project will find application in the future - if there is a need for a new sample of this kind.