Motivated cruelty. The sorrowful adventures of the "Royal Tiger" in Kubinka 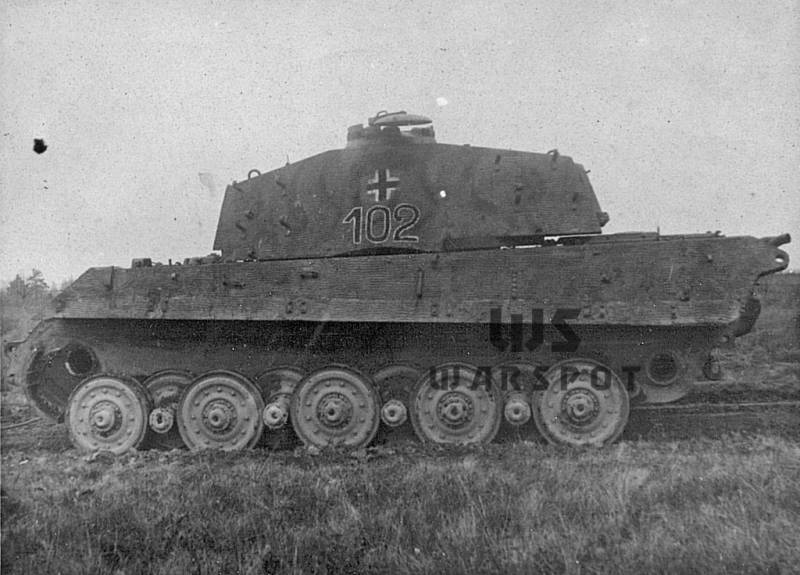 Pz. Kpfw. Tiger Ausf. B. at number 102 before the execution in Kubinka. Source: warspot.ru

For the first time, the "Royal Tigers" fell into the hands of Soviet soldiers of the 1st Ukrainian Front in mid-August 1944 in the village of Oglendov beyond the Vistula, north of the town of Stashev. This was a consequence of a failed battle for the Germans with heavy Soviet IS-2s, when the 501st heavy tank the battalion lost 12 vehicles. At the same time, two of them, numbered 502 and 102, turned out to be almost serviceable and, after cosmetic repairs of the tracks, could move independently. These were command vehicles with an additional sixth crew member and reduced ammunition. The Germans not only left combat-ready vehicles on the battlefield, but also provided the Soviet testers with detailed operating instructions. As a result, the 502nd and 102nd Pz. Kpfw. Tiger Ausf. It was decided to send B to Kubinka for detailed study. The first car is still alive, it can be seen in the exposition of the Patriot park, but the second took on the role of a victim of the Soviet artillery. But before these 68-ton monsters had to be delivered to the suburbs. Due to constant breakdowns "Tigers" appeared in Kubinka only on 26 September. 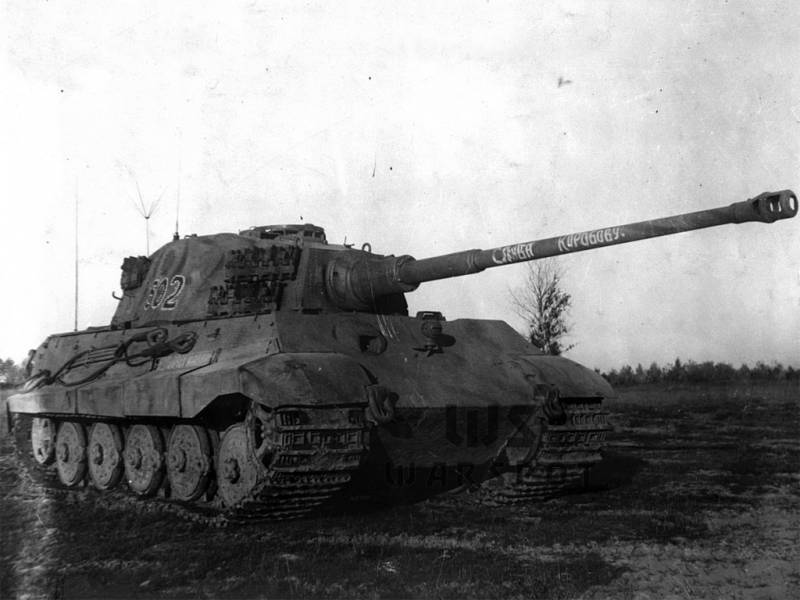 The second of the "Royal Tigers" that arrived in Kubinka with tower number 502. It is he who will take a place in the museum exposition. Source: warspot.ru
The impression was that the German tanks did not want to go to Kubinka at all. Before they got to the railway station, the Soviet tankmen drove them 110 kilometers across the Vistula. The following happened on Tiger B with tower number 102 during this run:
- the bearing of the left idler wheel hub has collapsed;
- the right side of the V-shaped engine overheated due to the installed late ignition;
- constant overheating of the gearbox due to poor cooling and 30-degree heat;
- destruction of a significant number of track fingers, especially in the frequent turns of the tank;
- rapid release of the tension of the tracks: it was necessary to stop for tension after 10-15 kilometers.

After unloading in Kubinka from the train platform, the right side gear was jammed at the tank. An autopsy showed that it completely collapsed for some inexplicable reason. Here the 502nd "Tiger B" was very useful, from which the live airborne transmission was removed. 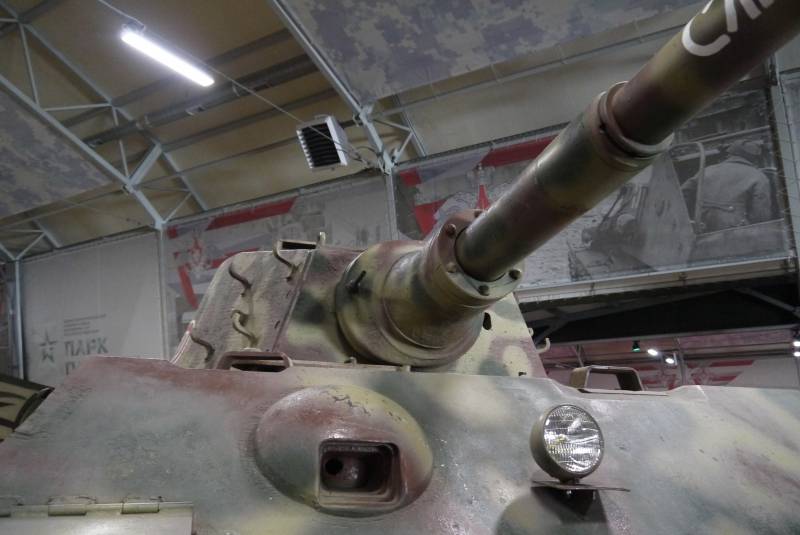 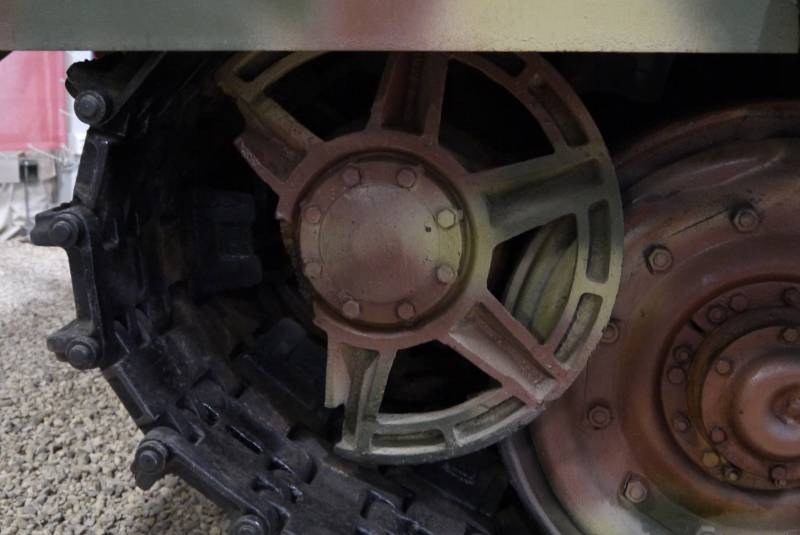 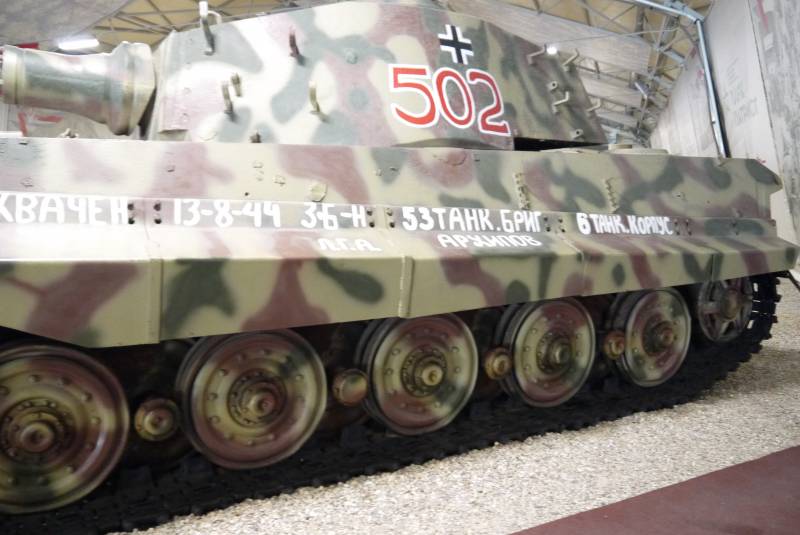 Survivor of the 502nd Royal Tiger in Patriot Park. Photo by the author.
Upon the arrival of the couple in Kubinka, the terms of reference for the Scientific and Testing Armored Range of the GBTU of the Red Army for the study of the German cat No. 102 were issued by the deputy chief of the GBTU, Lieutenant General Ivan Adrianovich Lebedev. It is noteworthy that from the very beginning, the German tank was not compared with its predecessor, the Pz. Kpfw. Tiger Ausf. E, and was perceived by Soviet engineers as the successor to the PzKpfw V Panther. This was largely a consequence of similar design solutions and contours of the hull with the turret. In the conclusions, the engineers write as follows:

"Tanks" Tiger-B "represent the modernization of the main German tank" Panther "in terms of strengthening the armor and increasing the caliber of installed weapons."
Initially, the car, which passed only 444 kilometers before testing, had a 35-kilometer run on a dry country road. The goal was to determine the average speed of movement. Even this small gap, the tank could not pass without misadventures: it constantly knocked oil out of the right fan drive, which required regular stops for inspection and refueling. As a result, the average technical speed (including "pit stops") was only 11,2 km / h. Due to the gigantic fuel consumption, the tank's mileage on country roads did not exceed 90 kilometers. Is it a lot or a little? For example, the domestic IS-2 traveled 135 kilometers at one filling station, being content with 520 liters of diesel fuel. A heavy German for 90 km needed 860 liters, that is, about 970 liters per 100 kilometers! At the same time, the instruction stated that "Tiger B" should spend no more than 700 l / 100 km of track on country roads. Kubinka engineers wrote off such a monstrous gluttony for engine wear, which, we recall, covered 444 km. The Germans apparently did not have a working hour meter, so it was not possible to identify the real "mileage" of the "Maybach". Perhaps one of the reasons for such an overconsumption of fuel was the use of domestic KB-70 gasoline. 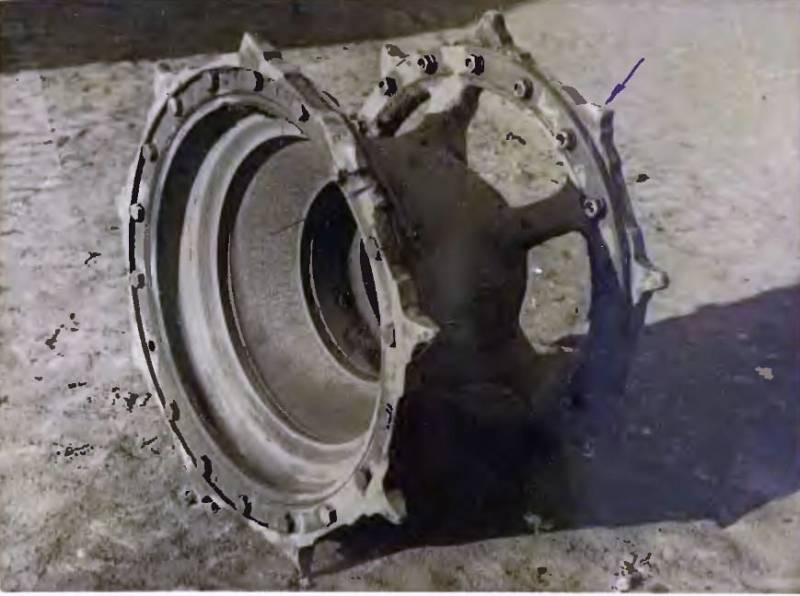 The nature of the destruction of the teeth of the rims of the drive wheel. Photo from test report
Before serious breakdowns, we managed to test the agility of the tank. For the site, we chose virgin soil with a grassy cover and a solid loamy base. The planetary slewing mechanism provided "Tiger B" with good agility, while the smallest radius of 2,2 meters was achieved in the neutral position of the gearbox. When we reached 6th gear (the turning radius had already reached 33,2 meters), the tracks failed, and it was no longer possible to turn the tank in 7th and 8th gears. The emergency happened, as during the evacuation from across the Vistula, with two tracks and at once with twelve fingers. This is what the report says:

"Due to the fragility of the material, the fingers break into several parts in the planes of the track eye joint."
When I ran 530 kilometers on the speedometer, it cut off all the bolts of the outer gear rim of the left drive wheel. After 17 kilometers, the left drive wheel broke down again and, in addition, the torsion bar of the front left road roller collapsed. She cut off all the fastening bolts of the ring gear and tore the ring itself in two. In total, the 102nd "Tiger B" covered 557 kilometers (113 of them in Kubinka) until the moment of complete failure of the right-hand side gear. Donor car # 502 no longer had side gears, so the Tiger-B stopped forever. The weak point was the roller bearing of the transmission drive shaft.

From a technical point of view, the biggest complaints from Soviet engineers in the Tiger B were caused by flimsy final drives, drive wheels and track fingers: it was these nodes that did not allow full sea trials of a heavy German tank. It can be assumed that even if these parts were in good order, something would still fail in an overloaded machine. The King's Tiger was too heavy.

Even during this short period of operation, Soviet engineers managed to surprise the transmission of a German tank. Despite the high cost and complexity of the gearbox in comparison with domestic counterparts, it was distinguished by high reliability and ease of use. Attention was drawn to the careful processing of the gearbox gear teeth and good lubrication, which in part ensured the durability of the unit. The impacts on the teeth were seriously mitigated by the use of constant-mesh gears, as well as the synchronization of the angular speeds of the switchable elements while simultaneously regulating the fuel supply to the engine.

Interestingly, the Soviet engineers actually accused the Germans of plagiarizing the well-known turning mechanism of the French Somua tank, in which the power when turning is split into two streams. One of the most important advantages of the German swing mechanism is the locking of the articulated gears of planetary gearboxes. What did this give "Tiger B"? First of all, the elimination of the "differential effect" in the rectilinear movement of the tracked vehicle, when the tank was pulled to the side with uneven resistance on the tracks. By the way, the previous Pz. Kpfw. Tiger Ausf. E did not have such knots to neutralize the "differential effect". The swing mechanism was also distinguished by ease of control due to the use of hydraulic servo drives, reduced load on the clutches and their less wear, as well as the absence of units requiring adjustment. However, all these trump cards crossed out the complexity, high cost and great weight. 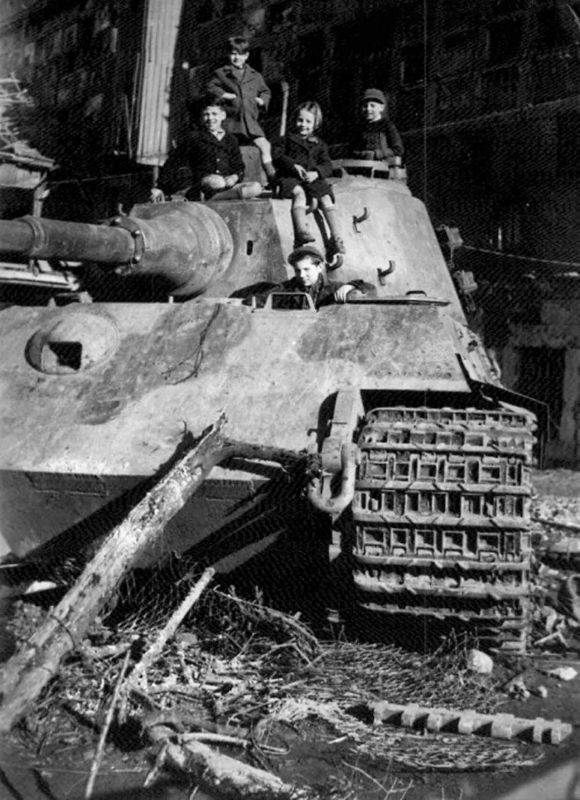 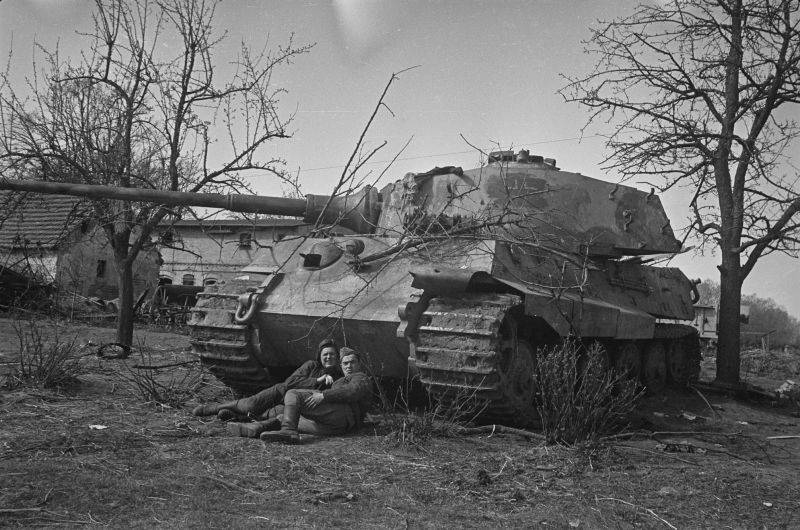 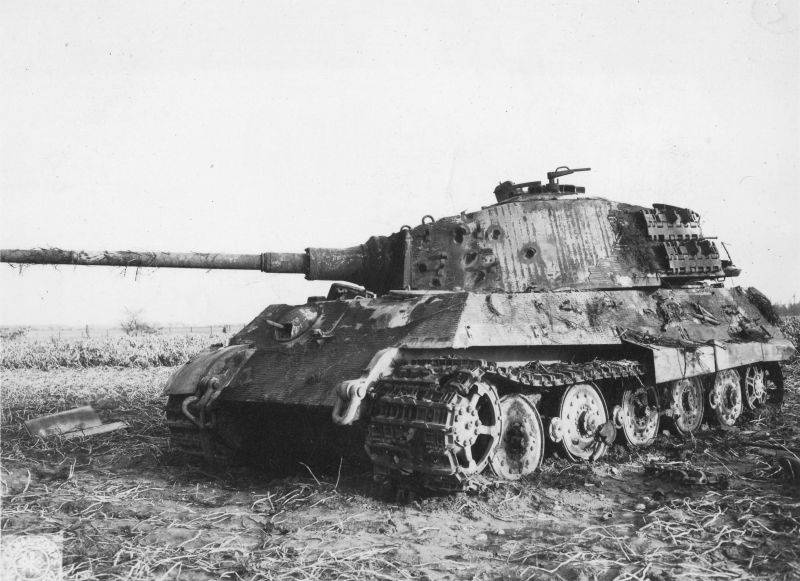 Several episodes from the short career of "Tiger B". Source: waralbum.ru
In Kubinka, the convenience and ease of mounting / dismounting of the tank engine was separately noted. This was realized by means of a cardan connection between the motor and transmission, which excluded accurate alignment during installation. Due to the large MTO, the tank provided good access to most of the pipeline connections and control rods.

Despite all of the above, from the extensive list of technical trump cards of the Tiger B tank, engineers have identified only six that deserve attention in the development of domestic tanks. The air purification system for powering the engine (filters directly above the carburetors), automatic fire extinguishing in the engine compartment, semi-automatic gearbox control drives, battery electric heating and internal depreciation of the road wheels looked interesting. Thermosiphon heating of the engine in winter conditions also seemed important.

The tests of "Tiger B" did not end there. Ahead were firing from the main caliber and the destruction of the Teutonic armor by Soviet artillery.