Researchers with and without experience. 2020 Mars missions 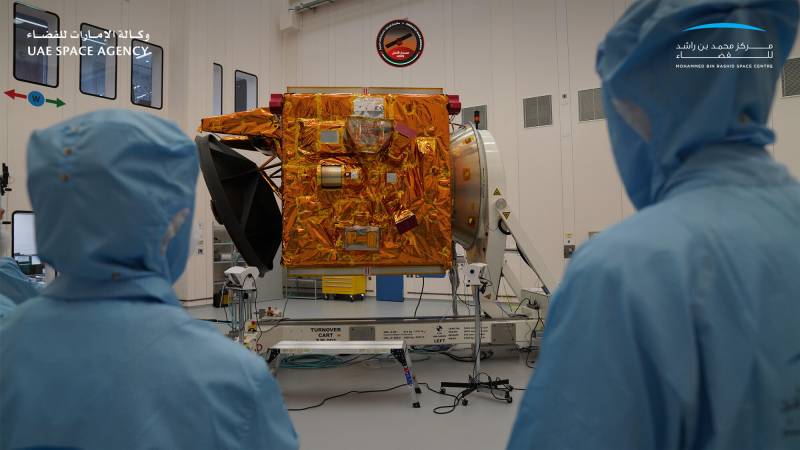 AMS "Al-Amal" at the stage of assembly. Photo by UAE Space Agency / emiratesmarsmission.ae

There is a launch window for flights to Mars right now. The July-August launch allows the spacecraft to reach its target by the end of next winter and save a few months. Three countries intend to use this opportunity at once - the USA, China and the UAE. Countries with extensive experience and beginners in this area send different types of equipment to the Red Planet and pursue different goals. Consider three current Mars programs.

"Hope" for the Emirates

The first launch window was used by the United Arab Emirates. On July 20, in the morning local time, an H-IIA carrier rocket with the Al-Amal (Nadezhda) automatic interplanetary station was launched at the LP-1 site of the Japanese Tanegashima cosmodrome. By mid-February next year, this AMS will enter Mars orbit and begin its work. 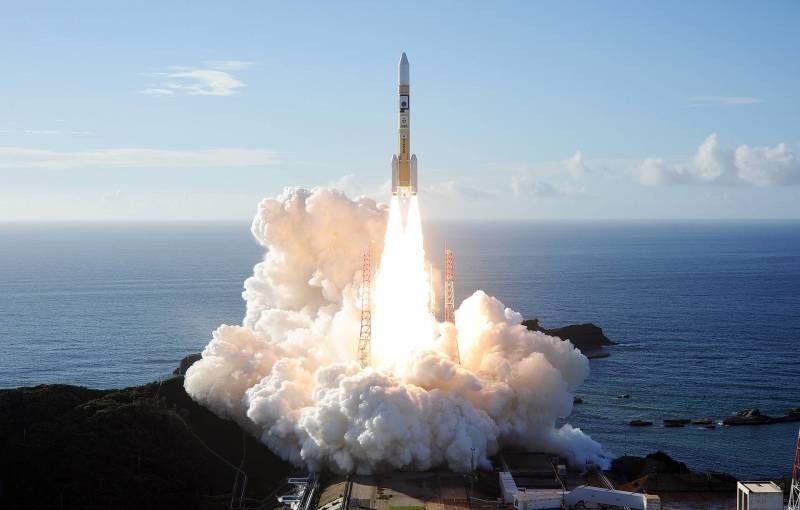 Launch of the H-IIA rocket with the Al-Amal product. Photo Mitsubishi Heavy Industries / mhi.com
AMS "Al-Amal" was developed in the framework of cooperation between the UAE Space Agency, the Mohammed ibn Rashid Space Center (UAE) and the University of Colorado (USA) with the participation of a number of other organizations. The product is an orbiting spacecraft designed to explore the Martian atmosphere. The station's weight is 1350 kg, the energy is based on a pair of solar panels.

The Nadezhda carries an EXI multi-range camera, as well as infrared and ultraviolet spectrometers EMIRS and EMUS. With the help of this equipment, AMS will be able to collect data on the state of the surface and atmosphere, as well as determine the concentration of various substances and perform other studies.

The Al-Amal project is not only intended to explore the Red Planet, there are other goals as well. AMC also solves image problems. The UAE wants to show its ability to work in space, incl. carry out fairly complex research projects. In addition, the station is planned to be put into operation by the XNUMXth anniversary of the country, and the creation of interest in space among young people is of no small importance. 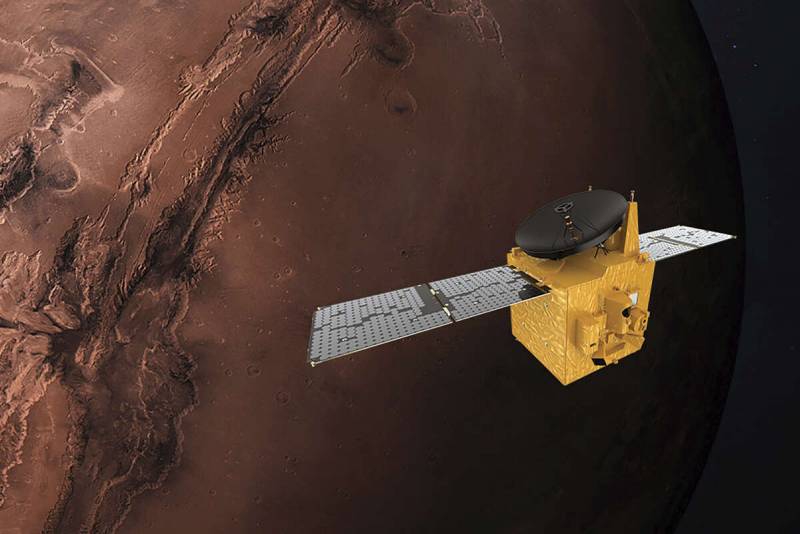 Al-Amal orbiting Mars. UAE spacecraft graphics / emiratesmarsmission.ae
The creation of Nadezhda has mobilized the scientific and technical organizations of the UAE and should become an impetus for further development. The Emirates are going to continue work in the space sector, develop it and attract investments in this promising sector. Thus, in addition to purely scientific results, the Al-Amal mission could have positive consequences for the industry and economy of the country.

China has more experience in the space sector and therefore implements more complex projects, incl. Martian. On July 23, the Changzheng-5 launch vehicle was launched from the Wenchang cosmodrome. Payload - AMS "Tianwen-1" (the product is named after Qu Yuan's poem "Questions to Heaven"). The Chinese station will enter Mars orbit in mid-February 2021.

The first stage of the Tianwen-1 mission provides for work in orbit. An AMC with a set of cameras, radar, spectrometer and particle analyzers will explore the surface and atmosphere of the planet in search of signs of living organisms or conditions for their existence. Also, with the help of the station, they will clarify the maps of the planet and supplement other knowledge about it. 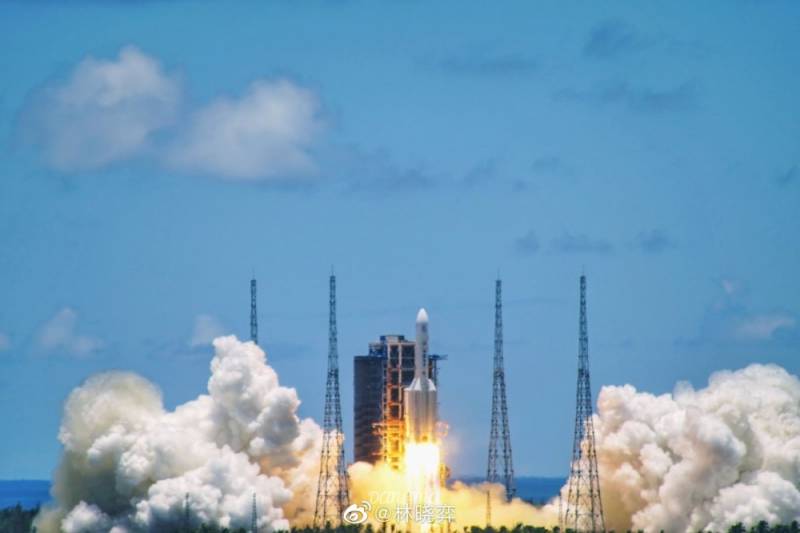 Launch of the Tianwen 1 mission. Photo Sina.com.cn
In April 2021, the Tianwen 1 orbiter will drop a landing module with a rover onto the surface of Mars. The latter is equipped with a GPR, magnetometer, cameras, etc. The self-propelled solar-powered vehicle will continue to work on the planet's surface and collect new data “on the spot”. The duration of orbital research is 1 Earth year, work on the surface is 90 days.

The success of the Tianwen 1 mission will complement the known knowledge about the Red Planet, as well as show China's ability to implement complex projects in the space industry. The PRC's cosmonautics is showing serious success, and the Martian program should continue this trend.

The launch of the American launch vehicle with the Mars 30 mission is scheduled for July 2020. A landing module with the Perseverance rover will be sent to Mars. The landing is scheduled for mid-February, and the term of work on the surface is set at 638 Earth days. 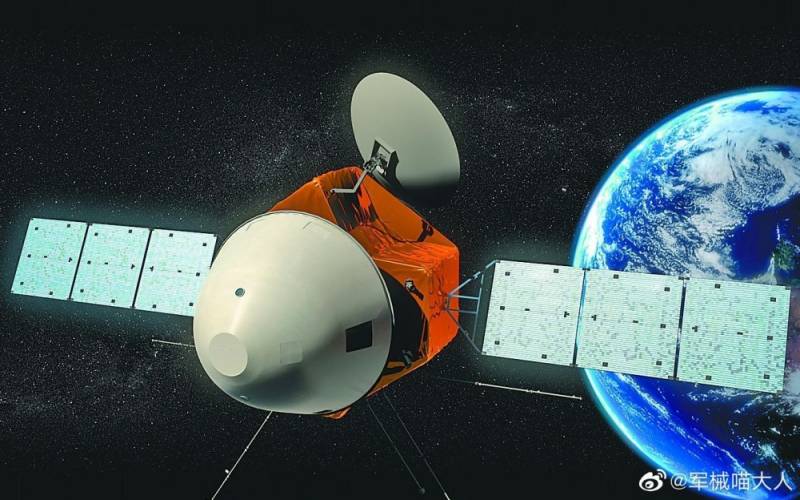 The orbital part of the Chinese AMC. Graphics Sina.com.cn
The new rover is a six-wheeled platform with an RTG-based power system, equipped with a variety of research and experimental instruments. The total weight is 1050 kg. A set of cameras of various kinds, several spectrometers, a georadar and a weather station are provided. The experimental device MOXIE is of great interest. Its task will be to generate pure oxygen from carbon dioxide in the Martian atmosphere.

The research capabilities of the rover will be expanded by the unmanned Mars Helicotper Scout (MHS) or Ingenuity (Ingenuity) helicopter. A drone weighing less than 2 kg will be able to stay in the air for up to 3 minutes and move away from the platform for hundreds of meters, after which it needs to return and recharge. MHS optics will allow you to study the environment around the rover, search for the most profitable routes and collect other data. 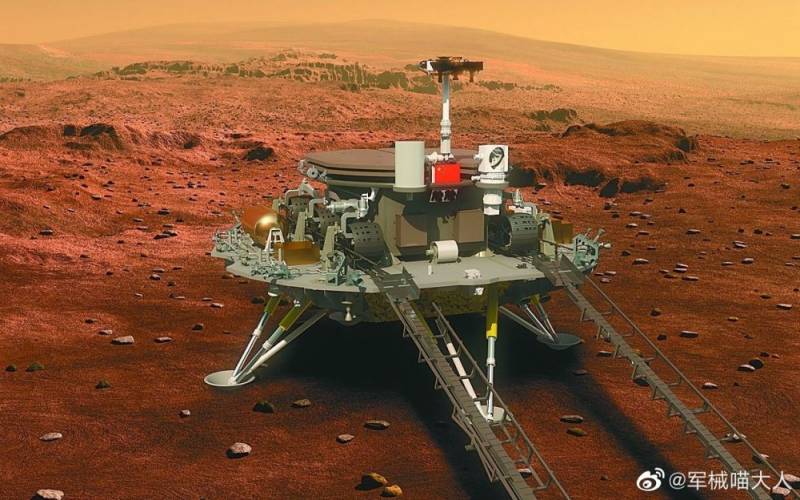 The Tianven-1 descent vehicle with a rover. Graphics Sina.com.cn
Persevarance will carry out research independently and convey information. At the same time, the project provides for a reserve for the delivery of samples of the substance to Earth. In the middle of the decade, it is planned to launch the Mars Sample-Return (MSR) mission, the main element of which will be a landing platform-launcher. She will be able to take containers with samples from "Perseverance" and send them into orbit on Mars for onward transfer to Earth.

The Mars 2020 program with the Perseverance rover is far from the first in stories NASA. The extensive experience of the United States allows us to assess its prospects with optimism and expect successful completion of research - and in the future, real samples of soil and rock.

It's not hard to see that the three countries exploring Mars take different approaches. The appearance of the three current missions clearly shows the goals and scientific and technical capabilities of different states. In addition, it is not only about conducting research on the Red Planet. Such programs are also designed to improve the image of their creators. 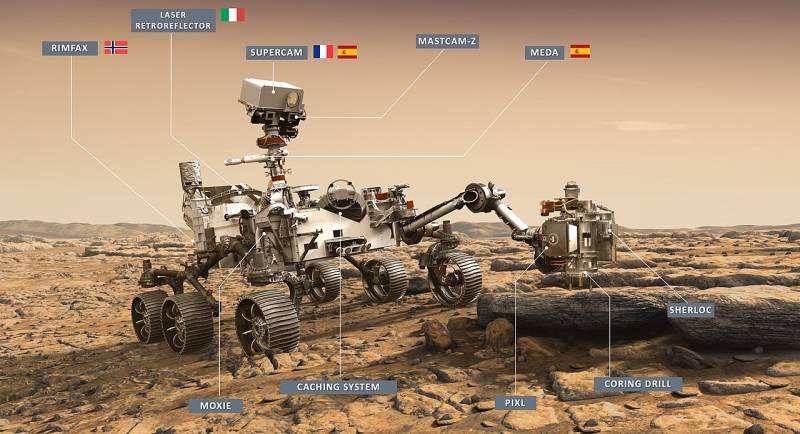 American Mars rover Perseverance and its equipment. NASA graphics
The UAE does not yet have the necessary scientific potential, and they had to turn to other countries for help - both to develop and launch their "Nadezhda". However, the Emirates hopes that the success of this mission will attract investment and specialists. It is quite possible that next time it will be possible to create something more complicated than an orbiter with three instruments on board.

The American mission Mars 2020 provides for the use of only a rover, but this product is highly sophisticated and even equipped with its own reconnaissance drone. With Perseverance and Ingenuity, the United States will be able to collect new data on Mars, as well as confirm its leadership in planetary exploration. 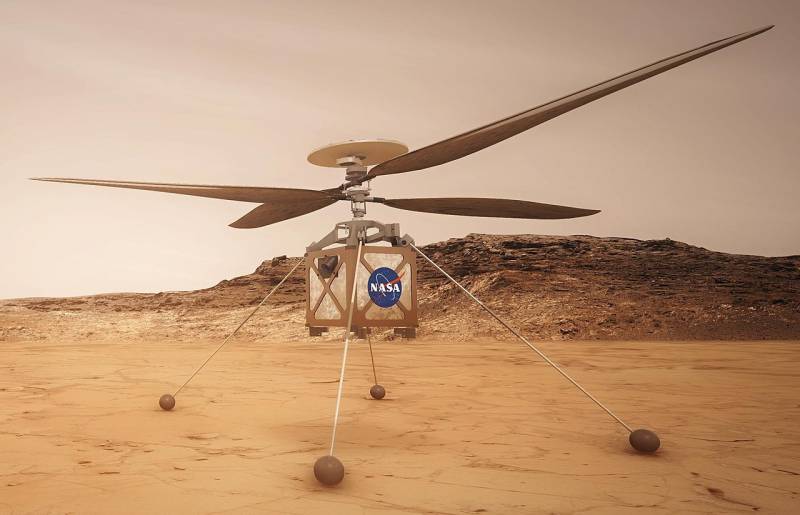 Martian UAV Ingenuity. NASA graphics
The Chinese project is of the greatest interest. The Launched Questions to the Sky include exploration both in orbit and on the surface, making it the most challenging mission to launch this summer. China is actively developing its space industry, creating a satellite constellation and launching new research programs. The current state of the art in China makes it possible to tackle AMC's most challenging projects - and is a source of pride.

Three missions to Mars are scheduled to start this summer. Two out of three launches have already been completed, and the third is expected in just a week. Two spacecraft are already entering the calculated trajectories that will allow them to reach their target in the shortest time. However, the path will be long and slow. Three spacecraft from the UAE, China and the United States will arrive at Mars in February next year, at minimum intervals.

Real scientific results of missions will appear only in the distant future. Spacecraft will make it to Mars next year, and it will take months or years to collect and process the data. However, results of a different kind can already be observed. Space in general and interplanetary research in particular attract the attention of more and more countries - and some even find the opportunity to organize complex programs. How successful these attempts were will become clear in the near future.