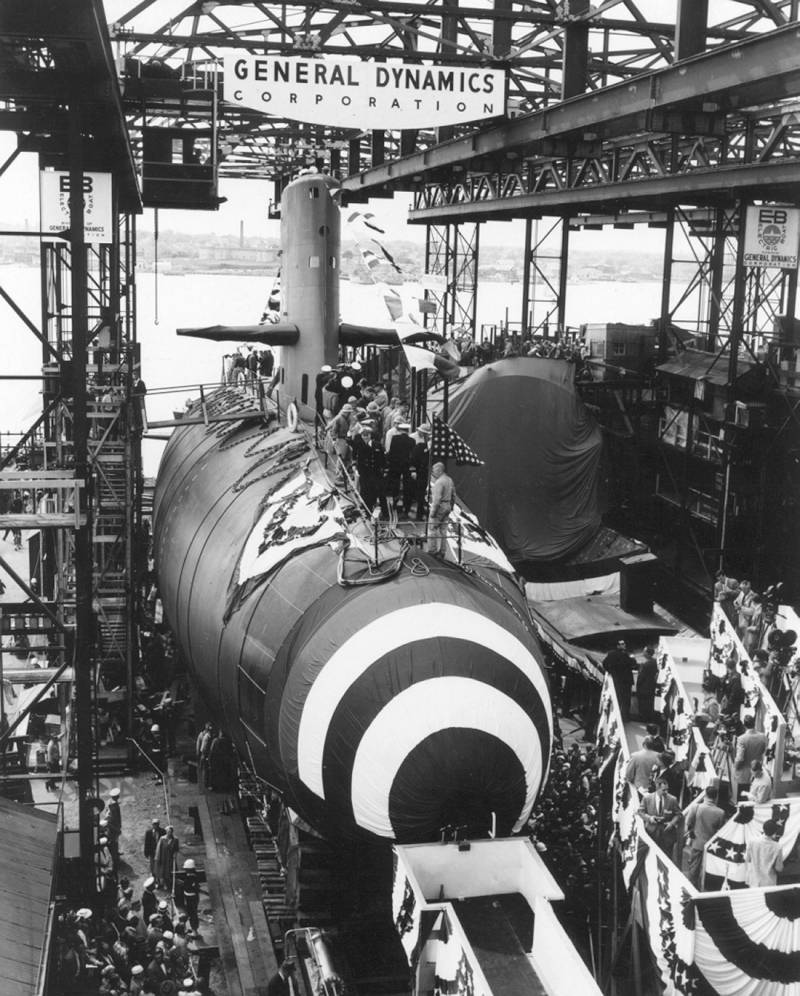 USS Skipjack lead ship (SSN-585) during launch. In the background is probably another submarine of this series.

In the fifties, the American military shipbuilding worked out the best options for the appearance of promising nuclear submarines. Using experimental and serial ships, various ideas were tested, which were then used in the following projects. A real breakthrough from this point of view was the Skipjack project. It combined the best practices of the time, and this determined the development of the underwater fleet for several decades.

The development of a promising multi-purpose submarine started in the first half of the fifties. The new ship had special requirements. The customer wanted maximum underwater performance, a modern set of on-board equipment, the possibility of carrying torpedo weapons, etc.

The search for the optimal appearance of such a boat took some time, and in the end it was decided to use the achievements of several existing projects, supplementing them with new ideas. The main sources of solutions were the projects of the Albacore and Barbel diesel boats: with their help, they built a new original robust hull.

The layout of the ship. 1 - HAK antennas; 2 - torpedo compartment; 3 - central post; 4 - reactor compartment; 5 - compartment of auxiliary nuclear power units, 5 - engine compartment
The development of a nuclear power plant with the S5W index was entrusted to Westinghouse. At the stage of development of motion systems, disputes arose about the required number of propellers. The Conservatives demanded that the traditional twin-screw design be left behind, while proponents of progress suggested using only one screw. As a result, the submarine became single-shaft, which gave a number of advantages.

The layout of internal volumes was created on the basis of long-tested, recently implemented and completely new ideas. This concerned both the location of the compartments and the placement of individual posts, weapons, etc. In addition, it was proposed to abandon a number of traditional control systems in favor of actuators with remote control.

In accordance with the finished project, the Skipjack submarine (Striped Tuna) was a one and a half hull ship with a length of 76,7 m, a width of 9,55 m and an underwater displacement of 3124 tons (surface - 3075 tons). Both externally and in terms of characteristics, it should have been different from the existing American nuclear submarines and diesel-electric submarines. 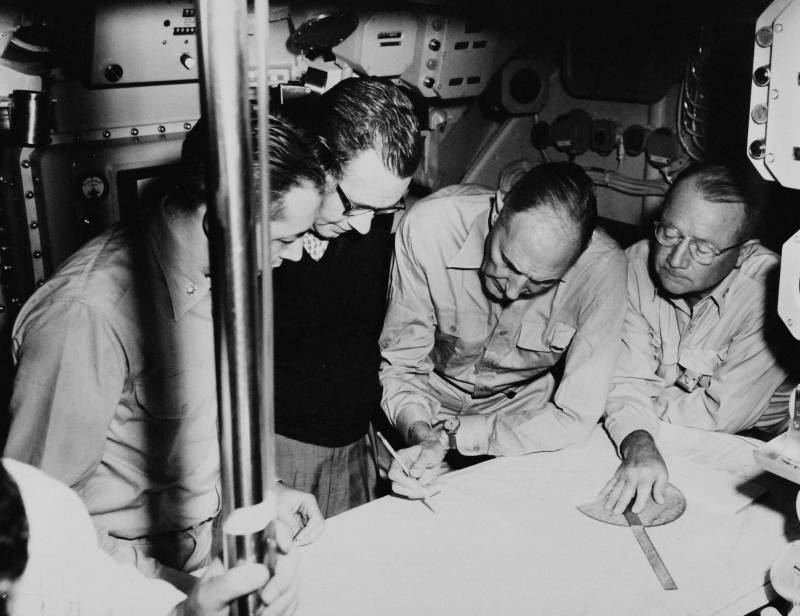 Senior guests at USS Skipjack headquarters
In the Skipjack project, the so-called The Albacorian hull is an aggregate of the type developed for the USS Albacore (AGSS-569) experimental high-speed diesel-electric missile submarine, built in 1953. The hull had an elongated teardrop-shaped “body of revolution” with a minimum of protruding parts, which reduced water resistance.

On top of the hull was a streamlined fencing fence. Horizontal nasal rudders were transferred from the hull to the wheelhouse, where they did not cause vortices that interfere with the sonar. In addition, this arrangement allowed to increase the area and effectiveness of the rudders. In the stern there were horizontal and vertical stabilizers with rudders and a single screw.

The outer contours of the boat were determined mainly by a solid hull. In this case, the nasal compartment and one of the central ones had a reduced diameter and were covered by a light body. In the space between the two bodies were ballast tanks. 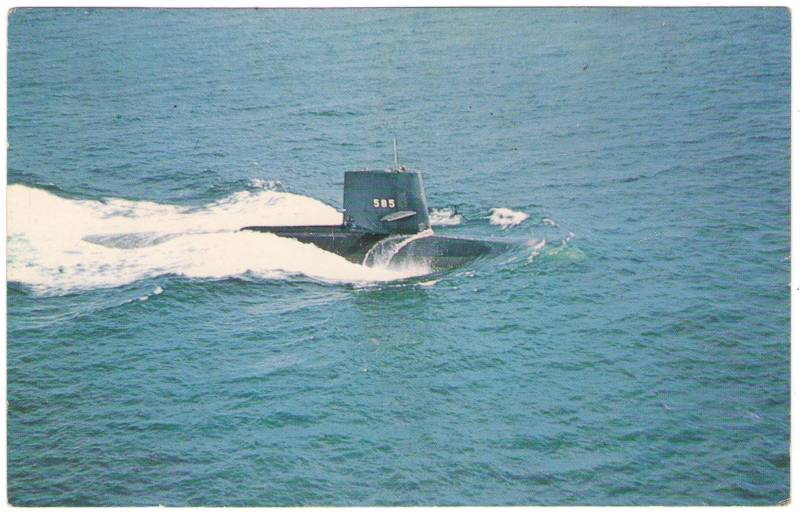 Skipjack at sea
Guided by the experience of the Barbel project, we decided to build a solid case made of HY-80 steel with a thickness of parts up to 1,5 inches (38 mm). This design made it possible to dive for 210 m. The internal volumes were divided by bulkheads into five compartments. The first contained torpedo weapons, the second was residential, it also had a central post. Immediately behind it was the reactor compartment. The aft half of the hull was divided into the auxiliary equipment compartment of the nuclear power plant and the engine room.

The S5W reactor with a turbo gear unit delivered up to 15 hp of shaft power. With one screw, the submarine could reach a speed of 33 knots under water or 15 knots on the surface. Despite the not very high characteristics of early ship reactors, the practical range was unlimited. 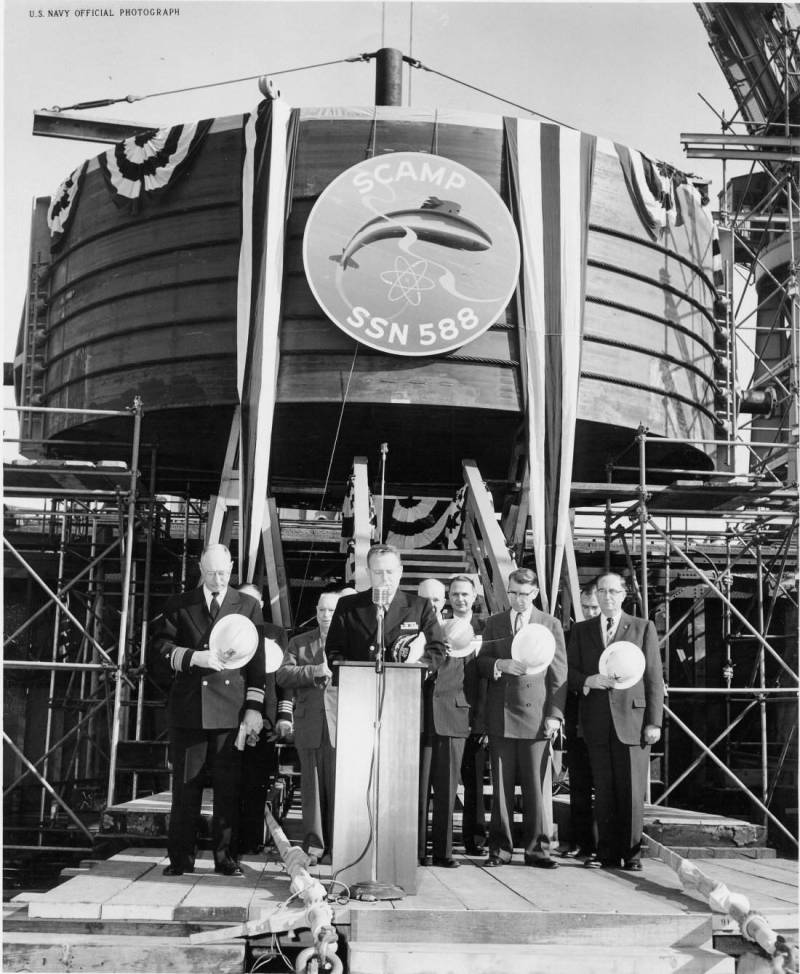 Second USS Scamp Bookmarking Ceremony (SSN-588), January 1959
The Barbel project also took the idea of ​​a single team post. Submarine, reconnaissance, armament, and other control posts were located in one room. To create such a command post, it was necessary to revise approaches to the organization of control systems. Previously, part of the systems was controlled directly from the central post, for which cables and pipelines were connected to it - this complicated the design of the submarine. Now the same operations were carried out by actuators with remote control.

The armament of the Skipjack submarines consisted of six 533-mm torpedo tubes in the bow compartment. The devices were arranged so that they did not interfere with the large antennas of the sonar complex. The ammunition consisted of 24 torpedoes in vehicles and on racks in the torpedo compartment. The use of ammunition in conventional and nuclear versions was allowed. 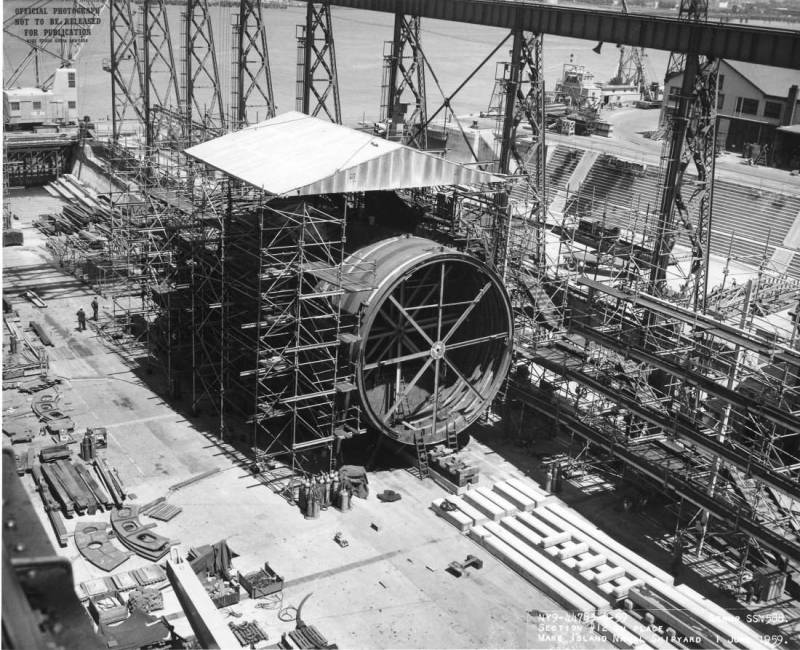 Scamp under construction, July 1959
The full-time crew of the submarine included at least 85-90 people, including from 8-12 officers (as the service and modernization of the ships, the crew changed). For their accommodation, separate cabins and cubicles were provided in the living compartment. Autonomy was several months and depended on food supplies.

The main multi-purpose submarine of the new type, USS Skipjack (SSN-585), was laid down on May 29, 1956 at the General Dynamics Electric Boat plant. Almost two years later, the submarine was launched, and in April 1959 it was officially included in the U.S. Navy. The construction of the remaining ships began in 1958-59. and was carried out in parallel with other types of nuclear submarines. In a number of cases, this has led to difficulties and delays.

So, soon after laying the boat, the USS Scorpion (SSN-589) was decided to finish building on another project - as the strategic missile carrier USS George Washington (SSBN-598). The multi-purpose Scorpion nuclear submarine was soon laid down again, and in 1960 it replenished the Navy. Similar difficulties arose with the submarine USS Scamp (SSN-588): the groundwork for it was transferred to the construction of the USS Theodore Roosevelt (SSBN-600) nuclear submarine. Because of this, it was possible to lay it later than everyone else, in 1959, and transfer it to the customer only in 1961. 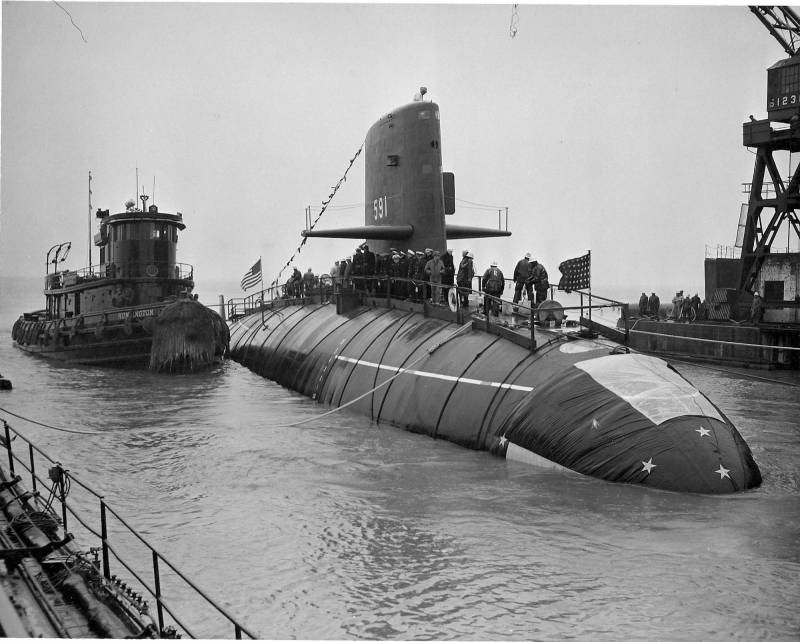 In 1958, the lead ship of the new series was put to the test and soon showed all its advantages. USS Skipjack was called the fastest submarine in the world (but accurate speed data was classified). Over the next few years, the Navy received five more such nuclear submarines, which made it possible to realize the benefits achieved.

Skipjack-class submarines served on both US coasts and overseas bases. They regularly went on campaigns in order to search for and discover strategic missile carriers of a potential enemy or to accompany aircraft carrier groups. Since the second half of the sixties, submarines have been repeatedly hired to work near the Vietnamese theater. There they were used to cover ship groups of the US Navy. 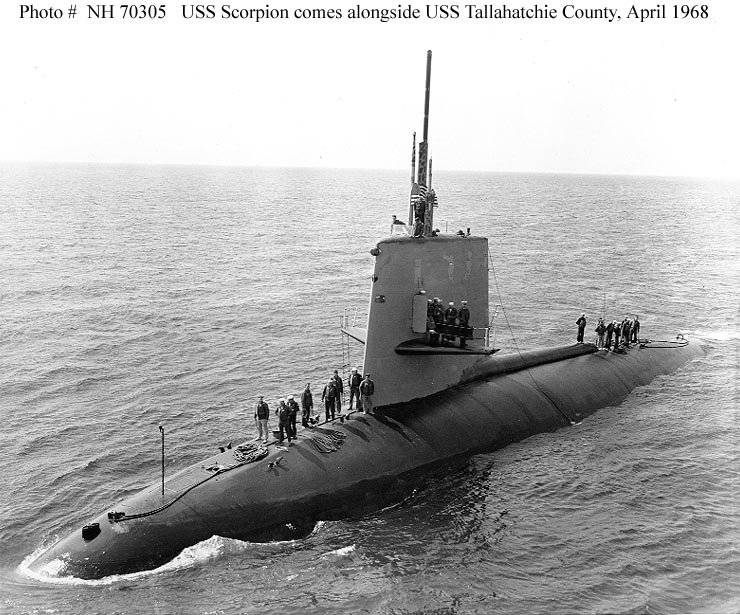 USS Scorpion (SSN-589) in its latest combat campaign
In May 1968, a USS Scorpion boat patrolled the Atlantic Ocean in the Azores and searched for Soviet submarines. In the period from May 20-21, the ship did not contact, after which an unsuccessful search began. Two weeks later, the boat and 99 sailors were allegedly missing. In October, the USNS Mizar oceanographic ship discovered a missing submarine 740 km southwest of the Azores at a depth of more than 3 km.

During the study of the sunken boat, various damage to the solid hull and other units was revealed. Various versions were put forward: from an explosion on board to an attack by a likely enemy. However, the true causes of the disaster remained unknown. 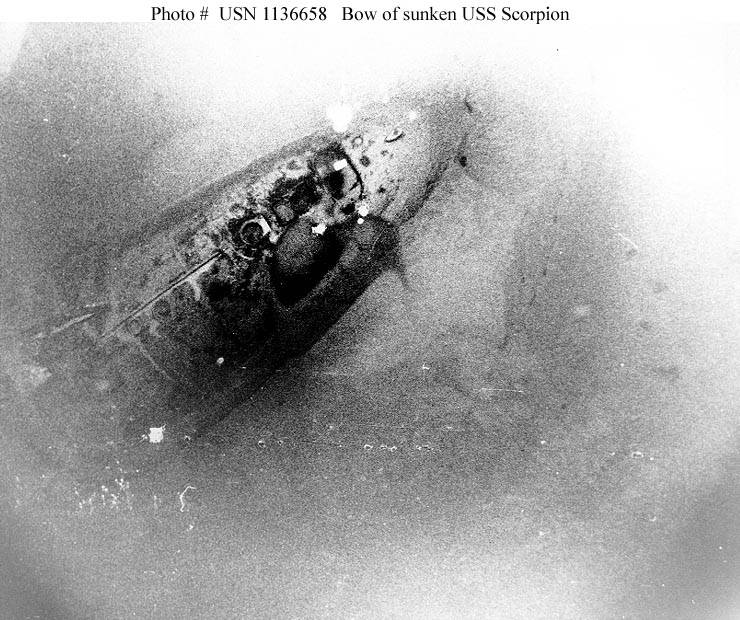 Snapshot of the remains of "Scorpio"
The service of the remaining five Striped Tuna continued until the second half of the eighties, when they were completely outdated morally and physically. In 1986, the USS Snook was withdrawn from the Navy, and two years later the lead USS Skipjack. In 1990, the remaining three were successively abandoned. From 1994 to 2001, all five ships were disposed of.

Multipurpose atomic submarines of the Skipjack type had a number of characteristic differences from other ships of their time, and this gave serious advantages. After testing and testing in practice, new technical solutions have become widespread. Until now, the U.S. Navy submarines retain a certain continuity with the long decommissioned Skipjack-type submarines.

Skipjack's main legacy is the enclosure. Streamlined contours and HY-80 steel structure were actively used in the future, including in the Los Angeles project. Chopping horizontal rudders, having important advantages over the hull, have been used for several decades. They were abandoned only in the modern Los Angeles Improved project. 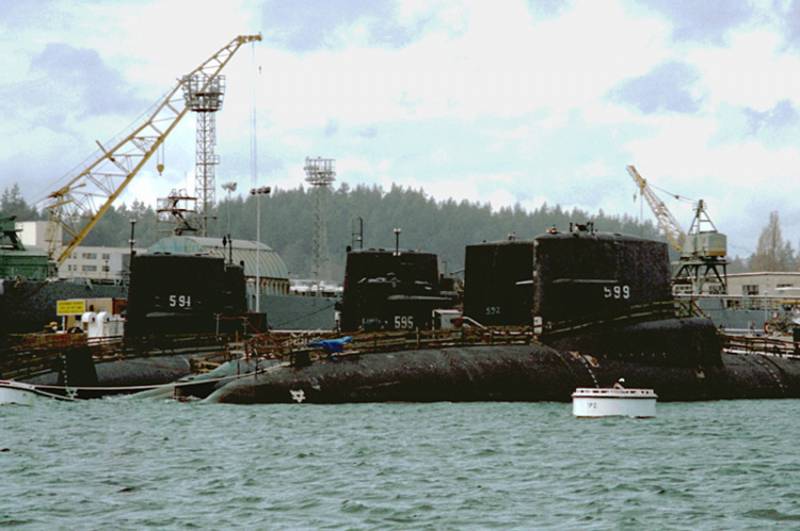 Discarded submarines awaiting disposal at the Puget Sound Naval Shipyard, 1996. By numbers you can find the USS Shark (591) and USS Snook (592) submarines
Separate layout solutions, with one or another change, are still used in all projects. A single command post has long been the standard for the US submarine fleet. Separately, the S5W reactor should be noted. This product was used on 98 eight-type boats in the US Navy and on the first British nuclear submarine - HMS Dreadnought. Not a single new reactor has yet received the same distribution.

Thus, Skipjack multipurpose submarines occupy a special place in stories American Navy. They were not the most numerous boats of their class and could not boast of military merit, but their value lay elsewhere. With the help of Skipjacks, a number of important decisions were worked out that determined the further development of nuclear submarine forces.