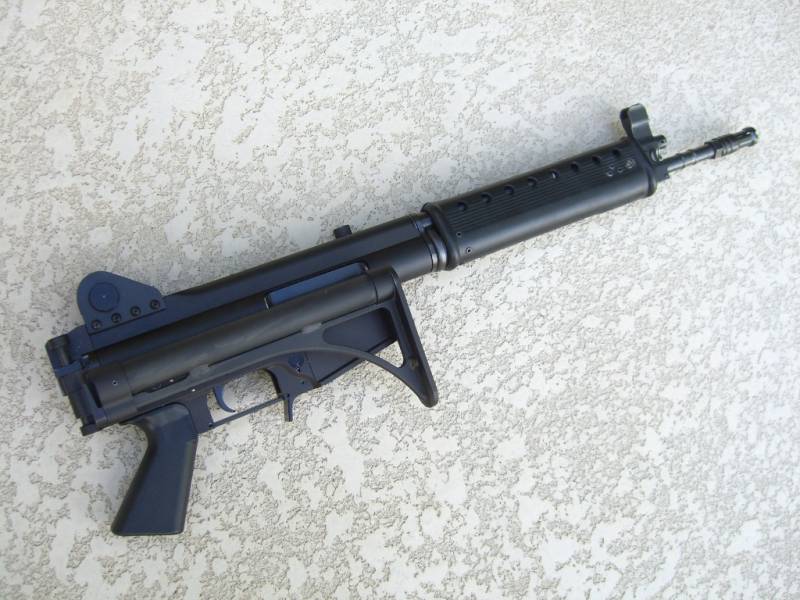 Kalashnikov assault rifles, FN FAL rifles and the AR series have certain advantages that have become the key to their popularity and wide distribution. The simultaneous use of all the strong features of this weaponssupplemented by new original ideas, could lead to very interesting results. The American company Holloway Arms took such a step, and its result was the HAC-7 rifle.

The future designer of the rifle Robert "Bob" Holloway at one time managed to fight in Vietnam, and later participated in the Rhodesian conflict. During the two wars, he had the opportunity to get acquainted closely with a number of modern automatic rifles from different countries and draw technical conclusions.

In the early eighties, the retired military decided to create his own rifle design, combining the best features of existing models. As sources of ideas, a Kalashnikov assault rifle, an AR platform, and a FAL rifle were used. In this case, to connect the borrowed decisions into a workable design, we used our own ideas of the gunsmith. 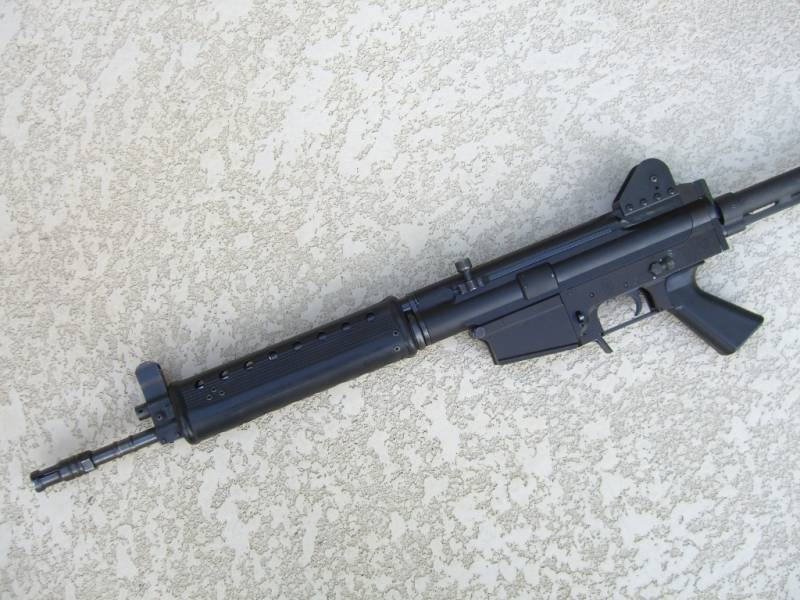 View from the other side. Photo: Aftermathgunclub.com
In 1984, the newly created Holloway Arms Company launched the finished sample, the HAC-7 self-loading rifle. The product was intended for civilian users, but, despite this, it had some of the features needed by army weapons.

Own and borrowed ideas

In general, the HAC-7 was a self-loading rifle with automatic equipment based on the removal of gases with locking by turning the shutter. Outwardly, it was similar to the Belgian FAL, however, the internal mechanisms resembled other samples of that time.

Aluminum was widely used in the design, and steel went only on loaded parts. One of the goals of the project was to achieve maximum manufacturability. In the future, this in some way affected the results of the project. Also managed to get a win in bulk (without any negative consequences). 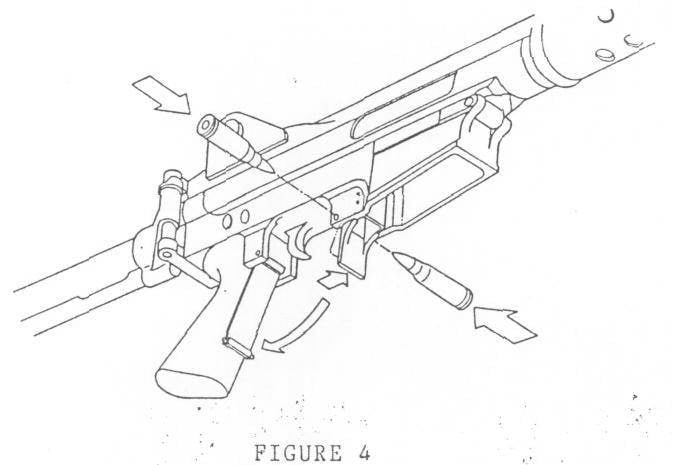 The principles of disassembling weapons. Figure from user guide / biggerhammer.net
The disassembly scheme was borrowed from the AR-15 and FAL. The receiver was pivotally connected to the trigger guard and fixed with a pin. It was proposed to remove the pins using a cartridge: for this, their ends had a recess under the nose of the bullet. In some cases, when disassembling, a sleeve was used as a lever.

The standard barrel for the HAC-7 was 508 mm long. Also produced was a HAC-7C carbine with a 406 mm barrel. Sniper and sports modifications with a barrel length of 610 mm were developed. The manufacturer’s catalog mentioned the possibility of adapting the design for different cartridges, but serial rifles used only .308 Win (7,62x51 mm). The trunks were equipped with a muzzle device for a rifle grenade.

In front of the forearm was a gas block with a regulator and the ability to discharge gases for firing grenades. Inside the forend was a gas pipe several inches long. With its help, the gas piston was able to shift back: it reduced the mass of the structure and changed the forces acting on it when shooting and rolling back the moving parts.

Work with a gas pipe. Figure from user guide / biggerhammer.net
HAC-7 received a slide frame similar to that used in the AK. Behind it propped up a rethought return mechanism with a spring on the telescopic rail. In the channel of the frame was placed a rotating bolt with two combat stops of large width. The shutter rotated 60 °; the rotation was carried out using a transverse pin and a copy groove in the frame. The shape of the groove was made such that the shutter was unlocked and retracted for an increased time - this allowed to reduce recoil.

The fighting stops were very long and interfered with the work of the store. Because of this, a separate plate appeared under the shutter on the frame, holding the cartridges. The head of the pin that controls the rotation of the shutter did not fit in the dimensions of the receiver. This problem could be solved by using a hollow influx on board, but R. Holloway used a simpler design. In the receiver provided a hole with an overlay.

Cocking the shutter was carried out by an L-shaped handle on the left side of the weapon, stationary when firing. The ejection of sleeves - through the window to the right. To the left of the store’s shaft was a shutter button. 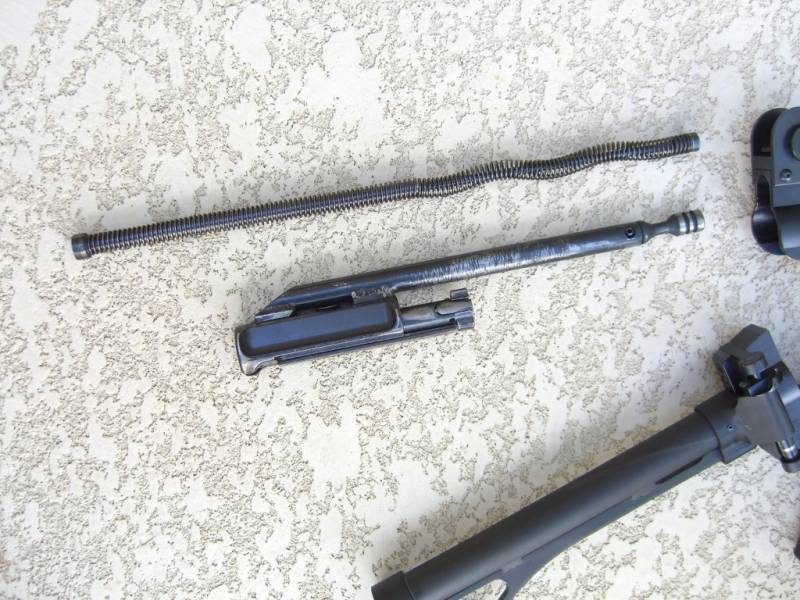 Shutter group and return mechanism of a familiar design. Photo: Aftermathgunclub.com
The lower casing accommodated the trigger and performed the functions of a store receiver. The USM design with minimal modifications was borrowed from the AK, but the management principles were changed. On the left side of the weapon there was an AR type fuse flag that simply blocked the trigger. Automatic modification needed a different system with the ability to fire bursts.

The .308 Win rifle could use box magazines from the AR-10, which underwent a slight revision. On the back of the store, a small slot was made for the latch - this part was borrowed from AK.

A fly with height adjustment was placed on the gas block. At the back of the receiver is an aperture sight with range adjustment and side corrections. Threaded holes were provided on the upper edge of the box for mounting the optical sight bracket of the desired model. 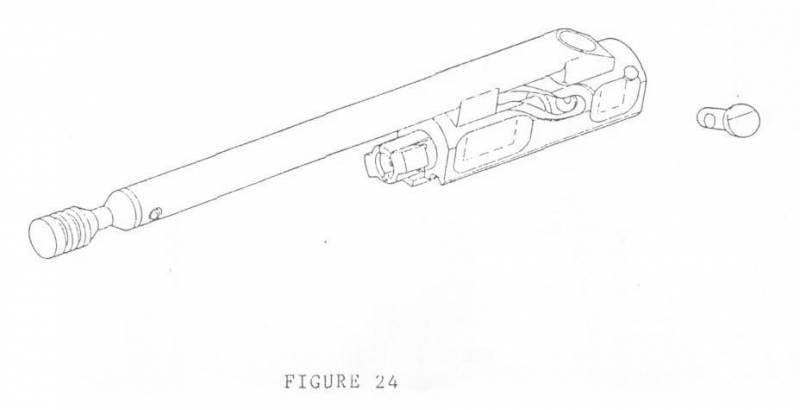 General view of the bolt group. Figure from user guide / biggerhammer.net
The basic HAC-7 was equipped with a plastic handle and a fore-end from two sidewalls. There was a butt, folding right turn. Modifications could have other fittings and additional attachments.

The rifle with an unfolded stock had a length of 1092 mm, with a folded - 840 mm. The mass of the product without a magazine is less than 4 kg. Special weapon modifications could vary in size and weight.

For sniper, athlete and left-hander

Based on the HAC-7, they developed and offered several special weapon modifications. The HAC-7A project provided for the use of an automatic fire trigger. Rate of fire was 650-700 rds / min. Such a rifle was intended for the army and police.

Due to the shortened barrel, the HAC-7C carbine had a length of 990 mm and was almost a kilogram lighter than the base rifle. Other differences were absent. Also offered was the HAC-7AC automatic carbine - a shortened weapon with an “automatic” trigger.

Details of the bolt group. Figure from user guide / biggerhammer.net
HAC-7S sniper rifle with a 24-inch barrel had a length of 1,17 m, was designed to mount an optical sight and had to show an increased effective fire range. Similarly performed sports rifle HAC-7M.

Of the most modifications of all is the HAC-7L. According to statistics, up to 15% of the population are left-handed, and these people may encounter problems when working with “right-handed” weapons. Holloway Arms decided to work with this sector of the market and made a special modification of the rifle under the left hand.

HAC-7L was distinguished by a “mirror” receiver with a right shutter handle and a left ejection window. The fuse box and delay button were moved to starboard. The shutter was changed by moving the extractor to the left. The design of automation and USM has remained the same. All this allowed to maintain the basic characteristics, but to make the rifle more convenient for a noticeable part of potential buyers.

As conceived by R. Holloway, the new rifle, being a successful compilation of the most effective solutions to existing projects, was to show advantages over competitors and have high commercial potential. However, such expectations did not materialize, and the entry into the market in 1984 did not cause any excitement. 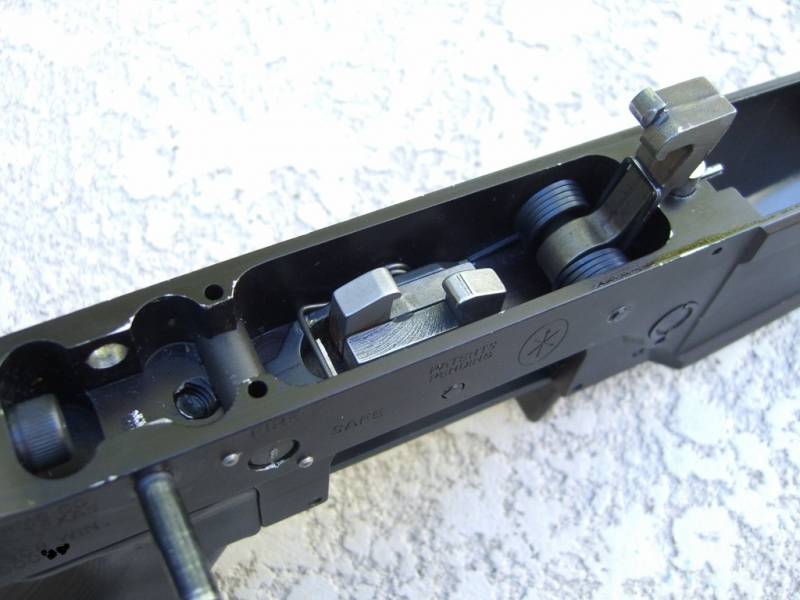 Trigger mechanism based on AK units. Photo: Aftermathgunclub.com
At that time, the US civilian market was attended by a wide variety of self-loading and automatic rifles with various characteristics and capabilities. The Holloway Arms rifle was just another example of its class. In addition, at that time, public attention was drawn to weapons under an intermediate cartridge of 5,56x45 mm, and other rifles faded into the background.

However, the HAC-7 was released in a small series and brought to sales. According to known data, no more than 290-300 of these rifles were collected (there are also estimates of up to 350 units). Most of these products are basic rifles and carbines. Also made up to 50 "left-handed" rifles. There is no exact production information for HAC-7S and HAC-7M. Automatic modifications, as far as is known, did not reach the series. All rifles were sold in the United States, they were not sent for export.

No new HAC-7 orders were received, and already in 1985 Holloway Arms was forced to close. Bob Holloway, having failed, left the arms business. However, as reported several years ago, he would like to return to this industry and create new models. 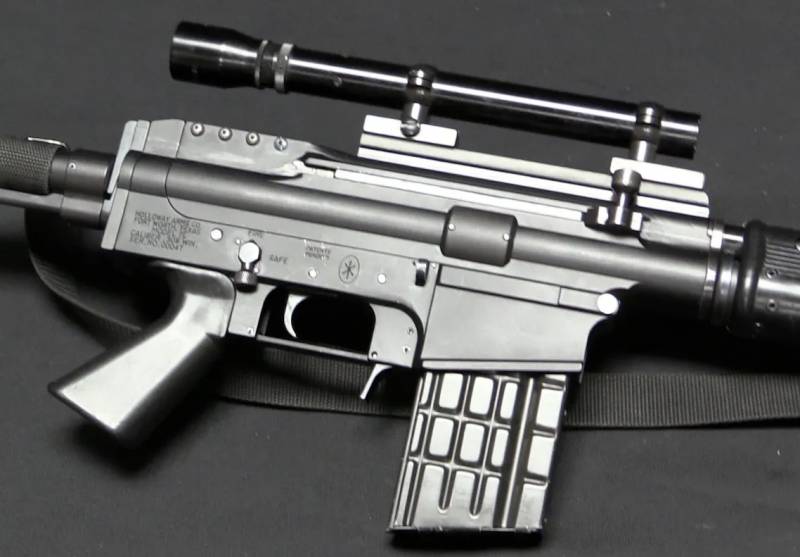 From a technical point of view, the HAC-7 rifle is of particular interest. Its creator did not begin to look for fundamentally new ideas, but used already well-known and proven solutions - both directly and after a certain rethinking. However, the rifle did not live up to expectations.

In general, the NAS-7 was a good weapon, but it needed refinement. Users complained that the rifle is inferior in reliability to other samples. In addition, in 1985 problems began with spare parts - due to the closure of the manufacturer. However, with a supply of parts and self-tuning, the rifle became a worthy weapon for civilian use. Over time, the HAC-7 gathered around a real fan club.

Despite the lack of commercial success, the Holloway Arms HAC-7 project confirmed the fundamental possibility of creating new weapons based on several existing models. In addition, this was one of the first attempts to create a lightweight rifle cartridge .308 Win. But the real time of such samples came later, when the company of R. Holloway had already left the arms market.