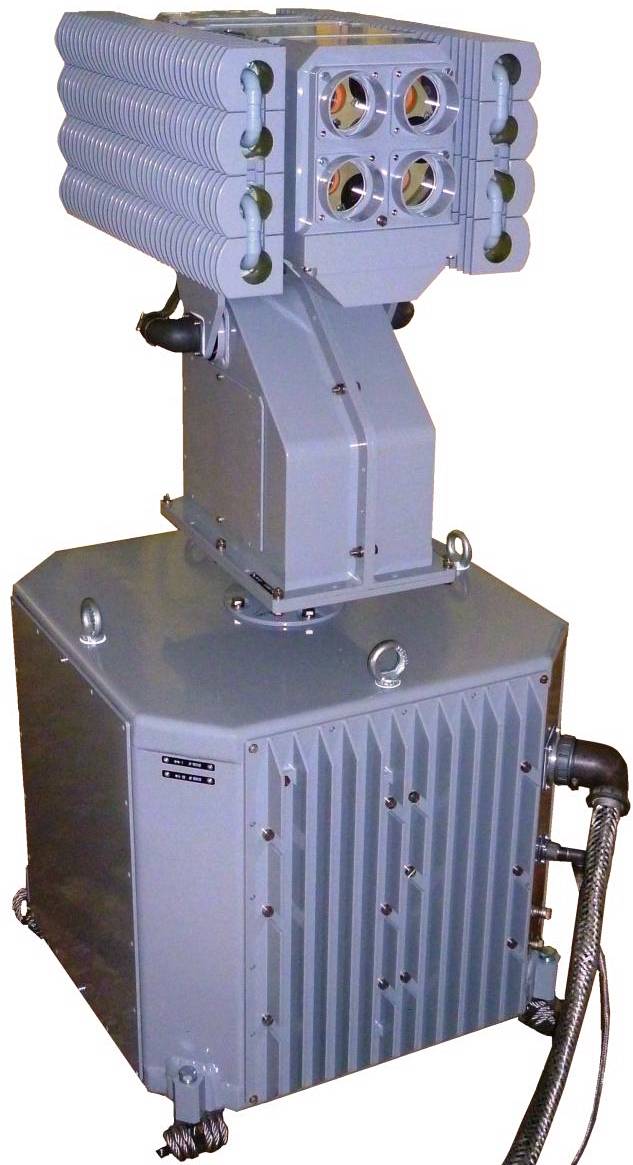 A few years ago, Russian industry first introduced the 5P-42E Grach station for visual-optical interference. Subsequently, the project 5P-42 "Eagle Owl" appeared with the same functions, but in a different version. To date, the product "Eagle Owl" is installed on several ships of the Russian fleet and should ensure their protection against a number of threats. The principles of operation of the 5P-42 station are very interesting - as is its overall potential.

The Filin product from the Integral pilot plant (part of the Vega concern, Roselektronika holding) is a unit of equipment suitable for installation on various marine carriers. The station itself is a slewing column with a swinging optics unit. The latter includes four lenses and advanced cooling radiators. The station control system is installed in the internal volumes of the medium.

The principle of the Eagle Owl is quite simple. The station has several visible and infrared emitters that emit a powerful luminous flux towards the target. Both constant illumination of the target and modulation of brightness are possible. The station actually flashes at a frequency of 5 to 15 Hz. Constant or modulated light has a negative effect on the observer and does not allow him to solve his task. The range of this effect is determined at the level of 2-5 km. The period of effective use is limited at twilight and at night.

The Eagle Owl can be used on various ships and vessels with a displacement of at least 50 tons, capable of delivering stations up to 2,5 kW of electricity. At the beginning of last year, it was reported that 5P-42 products were already installed on the ships of the Russian fleet - the frigates of project 22350 were the first to receive them. The Filin carriers by that time were the ships Admiral of the Fleet of the Soviet Union Gorshkov and Admiral of the Fleet Kasatonov. They received two stations each. The installation of the Owls on the next two frigates of the same series was also expected.

With the naked eye

One of the main tasks of the Eagle Owl is to prevent attacks on the carrier ship using a rifle or other infantry weapons. In such a situation, the station must act on the eye of the arrow used for aiming - with a clear deterioration in accuracy or even the inability to continue the fire. 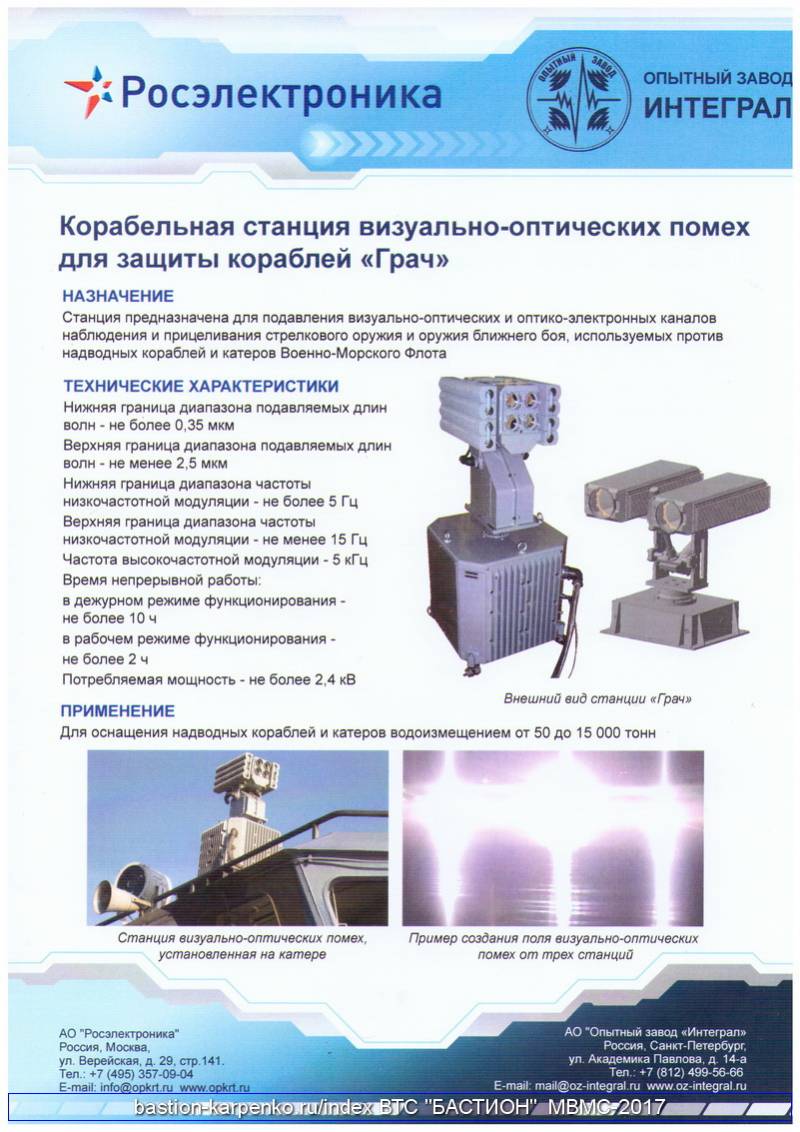 Promotional materials for the Grach / Eagle Owl project
In the dark, the “defeat” of the enemy occurs due to two factors. The first is directional bright radiation. This factor alone is able to "hide" the ship and thwart the attack. The second method of exposure is associated with brightness modulation. The station constantly changes brightness, which is why the eye does not have time to adapt - regardless of the use of protection. In addition, due to the correct selection of modulation parameters, the Eagle Owl affects not only the eye, but also the nervous system of the enemy soldier.

The developer organization provided interesting information about the results of the station tests. So, testers at distances up to 2 km simply could not see the target. At the same time, slightly less than half of the testers felt the effects of modulation on themselves - it led to dizziness, nausea, and other phenomena that sharply reduced combat effectiveness. 20% of the testers noted the onset of hallucinations. Soon after the cessation of exposure to modulated light, such effects ceased and there were no negative effects.

Filin is also capable of suppressing optoelectronic surveillance systems, and in this case, the range increases to 5 km. The principles of work on the enemy’s electronics are the same - powerful radiation in combination with low-frequency flashing.

Last year, the Zvezda TV channel showed footage from the tests of the Filin on a carrier ship. They were shot on modern digital equipment, and they can demonstrate the impact of the station on electronics. When the station is switched on, a pulsating illumination of a complex shape is formed at the place of the ship, which is also complemented by glare from the water. Such a light spot does not allow to consider the silhouette of the ship. Moreover, even a video of a blinking station is not very pleasant to watch.

Thus, in the case of electronic surveillance systems, station 5P-42 operates similar to the existing ground-based optical-electronic suppression systems, such as the well-known tank "Curtain". A bright flash interferes with the observation of the ship, and also does not allow to direct weapons at it. This applies to both complexes with optics on the launcher and optical homing heads. 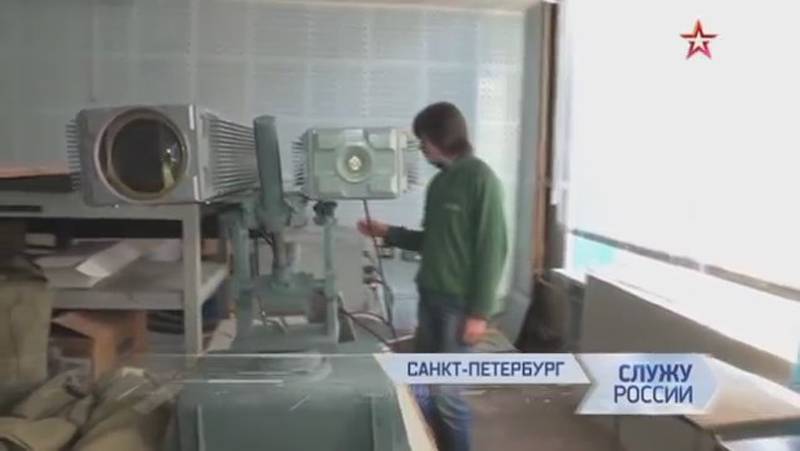 The product at the manufacturer

It is obvious that 5P-42 station is not universal and fundamentally invincible. You can find different ways to counter it - however, not all of them will be useful and will allow you to continue to observe or shell calmly.

Attempts to protect the observer’s eye with a light filter are likely to fail. Such protection can reduce the luminous flux entering the eye, but does not affect its flicker. In other words, the eye will still have to adapt, albeit to less intense lighting. Perhaps this will lead to less pronounced negative effects, but will not become easier to observe.

The use of optoelectronic devices with appropriate protection looks much more useful. You can protect yourself from Filin radiation by filters on optics or by corresponding processing of the video signal from the camera. However, this may not be enough. It is not enough to reduce the level of incoming radiation, it is necessary to maintain the silhouette of the ship, which does not have sufficient lighting. Thus, the enemy’s operator will have to adjust the brightness, contrast and other characteristics of the image, after which he will be able to make out the ship with the Eagle Owl.

If we are talking about a monitoring system of one kind or another, such methods are quite suitable for use. With guided weapons, everything is worse: it is doubtful that optical seekers are able to find a real target behind a flash and successfully aim at it.

The enemy can take into account the number of stations on the attacked ship. The frigates of Project 22350 carry two Owls each and, accordingly, can suppress optics only in two broad sectors at a time. It should also be noted that station 5P-42 operates only in the visible and infrared ranges and, by definition, cannot counteract electronic and radar systems. The ship with the Eagle Owl can be detected using the radar and hit a missile with a radar seeker. 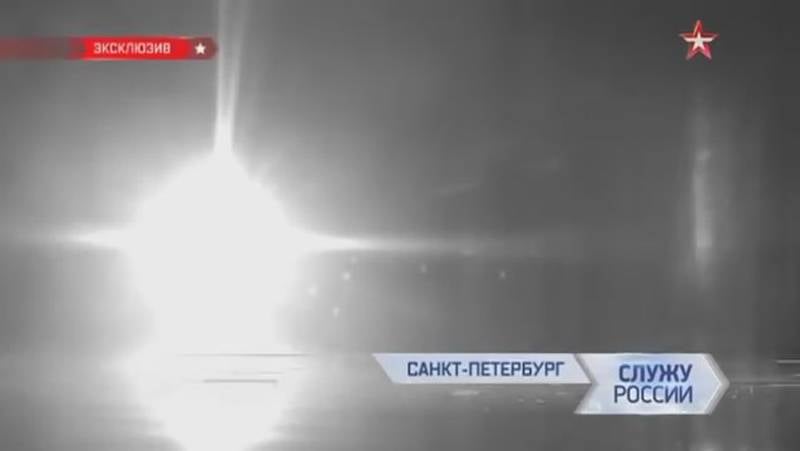 Illumination during the work of the Eagle Owl, filmed on a television camera
However, success is not guaranteed. The Eagle Owl is not the only means of detecting and protecting ships. An attack from different directions will still be detected, and the reaction to it will not only be a bright directional beam, since there are electronic warfare equipment and numerous weapons on board the warship.

As part of the Eagle Owl project, Russian industry has created an original and interesting system for protecting Navy ships from attacks in the near field. It uses an unusual way of counteracting observers and weapon systems and, during the tests, has confirmed its capabilities. The station is already installed on serial ships and is in operation.

Judging by the known data and estimates, the 5P-42 Filin system is capable of solving the tasks with great efficiency - in the given ranges of conditions and ranges. According to the main "combat" characteristics, it noticeably loses to other naval defenses, but it has important advantages. First of all, it does not have a destructive effect on the organs of vision or electronics. In addition, the station successfully complements other means of protecting ships.

Last year, the leadership of the development organization revealed plans for the near future. The main tasks for the development of the "Owl" relate to increasing the operating range and ensuring compatibility with land platforms. Implementation of such plans requires several years. Also in the past, there was talk of civil modification for non-lethal protection of various objects.

All this means that in the foreseeable future, the "Owls" will enter the arsenal of the fleet and the army, providing them with the necessary capabilities and advantages. Of course, visual-optical interference will not be the only and most effective means of combating the enemy, but their role should not be underestimated.

Ctrl Enter
Noticed oshЫbku Highlight text and press. Ctrl + Enter
We are
"Filin" on the protection of the fleet"Svetlana". History of creation
20 comments
Information
Dear reader, to leave comments on the publication, you must to register.