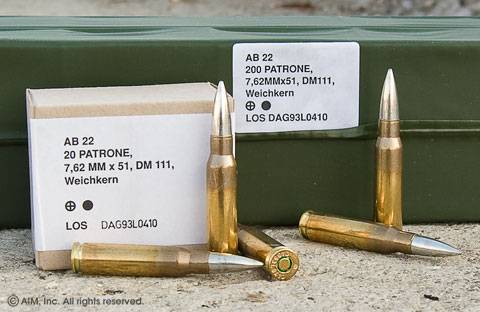 1955 year. 10 years after the events in the Federal Republic of Germany, the Bundeswehr is created. The Ministry of Defense, the Bundeswehr itself, all other services. The question correctly arises as to what and how the new army of the new Germany will arm itself.


As you know, in the Wehrmacht the main infantry weapon had a caliber of 7,92 mm. In principle, it would be quite realistic to continue design and production operations using the experience of the past. Not to mention the fact that the production of cartridges in old factories would be a simple matter.

But not in that case. The Bundeswehr was created for one purpose - to join NATO and become the basis of the bloc in Europe, since the Cold War was in full swing, the Soviet Tanks on the shores of the English Channel were quite a serious threat, and apart from Germany, there were no potential armies in Europe, which remained on the capitalist side.

Well, do not count on the “winners” from France?

So, the Bundeswehr should have been armed in NATO standards, respectively, all the old developments had to be forgotten.

Our hero, cartridge 7,62 x 51, was born, naturally, in the USA. Having analyzed the entire course of World War II, the American military department came to the conclusion that the modern army needed a new cartridge.

In general, pretty tormented with a rather impressive amount of ammunition from the infantry (M1A1 carbine - 7,62 x 33, M1A1 Springfield rifle - 7,62 x 63, Colt M1911 pistol and Thompson's PP - 11,43 x 23, M3A1 submachine gun - 9 x 19, machine gun M2 - 12,7 x 99, the BAR was generally produced for 4 types of cartridges), the American commanders decided that the army needed universal weapons that combined the capabilities of an assault rifle and a rifle.

Naturally, the cartridge for this weapon should have been, in theory, smaller than the standard .30, but with approximately the same characteristics.

The challenge is not one tens of millions of dollars, but very on time, Olin developed a new smokeless powder, called Ball Powder (spherical powder). The grain of this gunpowder had a strange shape, but gave out the necessary power.

And the Americans, rolled up their sleeves, rushed to work. After all, even then the creation of NATO loomed on the horizon, and whoever can provide the bloc with new weapons, in theory, will not just be in chocolate.

All US gunsmiths plowed from 1947 to 1953. The sleeve was taken from the .300 Savage cartridge, but slightly changed it. There was still a cartridge from the “Winchester,” but it was somewhat larger (.308). 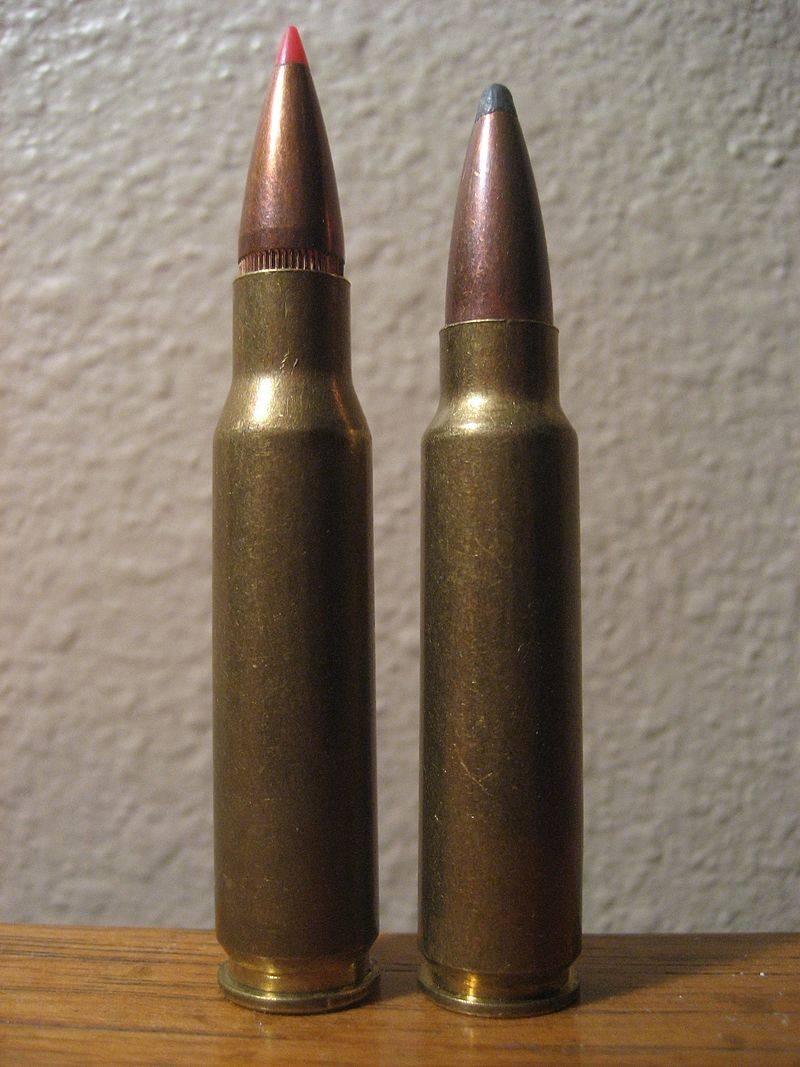 Winchester on the left, Savage on the right
In December 1953, the United States, France, Britain, Italy and Belgium agreed that the standard for the new NATO cartridge would be 7,62x51 based on the American T65 cartridge.

Let no one be surprised by such a set of contracting parties, and not with the Netherlands and Canada to discuss weapons issues ...

And then the Belgians entered the scene. And according to the approved drawings and sketches, they created just a wonderful cartridge with an SS 77 bullet, which had a conical tail and a lead core.

Well, if such tough guys like Fabrique Nationale d'Arms de Guerre, that is, FN, got a cartridge, then it’s a stone's throw to develop a new rifle.

Of course she appeared. The famous Fusil Automatique Legere, aka FAL. 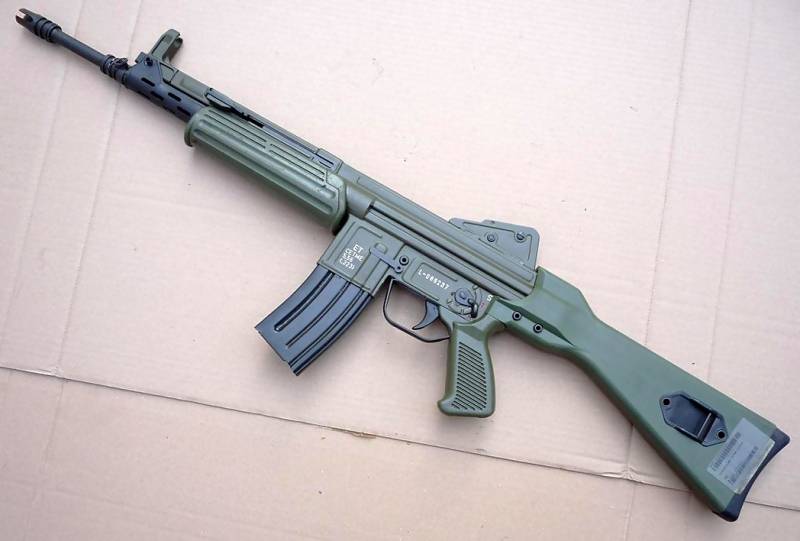 And in December 1954, the Belgians presented their rifle to the Germans, who did not yet have the Bundeswehr, but had border guards.

This is not to say that the Germans were idle. As after the lost World War I, of course, they quietly worked on weapons. Abroad. Specifically in Spain, at the company CETME. 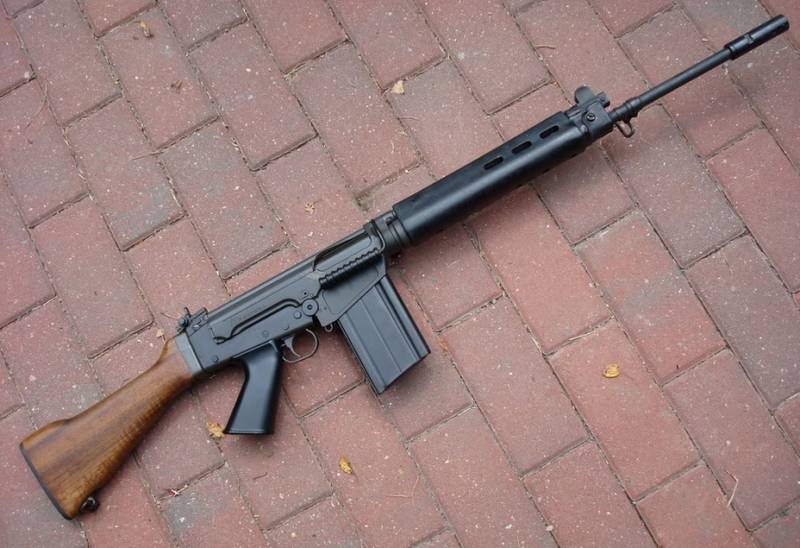 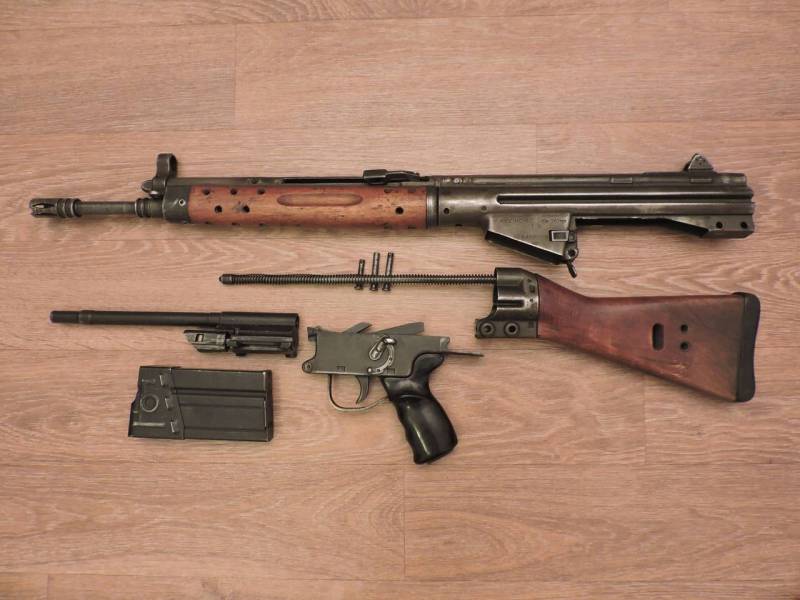 By the way, looking at whom, it’s worth talking about the similarities with the same StG44 ...
At CETME (Centro de Estudios Tecnicos de Materiales Especiales, Center for Technical Research of Special Materials), Ludwig Forgrimler, a former head of the Mauser’s Advanced Engineering Department, who fled to Spain with a team of cool engineers, worked tirelessly.

The Spaniards, of course, were not at all against such fugitives.

In January 1955, the first evaluation tests of rifles took place. And then all year the picky Germans made their choice, after which the federal border guard (there were no more troops in Germany) decided to purchase the FN FAL party.

Here the fact that the Belgian company beat two birds with one stone played a role: it supplied a rifle and a cartridge for it.

However, far from all in Germany it suited. The Germans were well aware that today is an ally, and tomorrow ... After two world wars - quite reasonably, by the way.

And having acquired a Belgian rifle, the pragmatic Germans “consoled” the Spaniards, who were loomed by compatriots (the Germans did not abandon theirs either), having bought a license to manufacture CETME.

Then began, as always, historical detective.

In 1957, the German government transferred the license for the production of CETME, developed by former Mauser employees, to Heckler and Koch. Which, ironically, was founded in 1949 by three former Mauser engineers too. Heckler, Koch and Sidel.

On the basis of the developments from CETME, Heckler and Koch made two models that went down in history. That is, MP5 and G3. And G3, in turn, replaced the FN FAL completely. For it is necessary to support the domestic manufacturer. But you say, that's enough already, it’s as if it was a cartridge!

And with the cartridges the Germans had a complete mess, oddly enough. The fact is that the Belgians went too far with secrecy. It is clear that everyone wants to be monopolists, but the FN stick has gone too far.

Even having bought a rifle, having received cartridges for it, the Germans did not receive all the information about the characteristics of the cartridge. What generally caused discontent and the search for another manufacturer.

The Germans were not in a very comfortable position. The Cold War has already begun, shouts have already begun about the Soviet threat, but there is no army, rifles are not native and with cartridges to them it is a complete nightmare.

Therefore, it was decided to do the cartridge ourselves.

Fortunately, a company like Dynamit-Nobel AG or DAG lived and felt great in the city of Furth. And the German command of the nascent Bundeswehr turned to them with a request to help with a cartridge.

But the conditions were set quite serious: the development and serial production of the German cartridge 7,62 x 51, "similar to the cartridge of the company FN."

The Belgian cartridges were still the best, and it was decided to copy them. And at the same time, it’s easy to tear apart rifle barrels. In order not to pay the full program for consumables, because the license FN categorically refused to sell.

At first they decided to give the production of trunks to the company Sauer and Son, but they first refused, citing the lack of the necessary equipment. Then they decided they would try.

Further problems of a different plan arose, because the FN company’s ammunition and blueprint samples were not enough to develop their ammunition.

But the Germans would not be Germans if they had not twisted themselves. It is very difficult to say how German industrial intelligence worked, but they worked no worse than the Abwehr. Not only that, secret information on the Belgian cartridge was still obtained, they also studied .308 cartridges from Remington and Winchester just in case, plus cartridge samples were received from Portugal, where the production of NATO cartridges had already begun, 7,62 51 x XNUMX.

As a result, the DAG turned out to be a cartridge, really similar to the ammunition of the FN company. True, he was a little different in size. The German bullet was a little longer and heavier than the Belgian. 29,3 mm vs 28,8 and weight 9,5 grams to 9,3. But not a critical difference, is it? 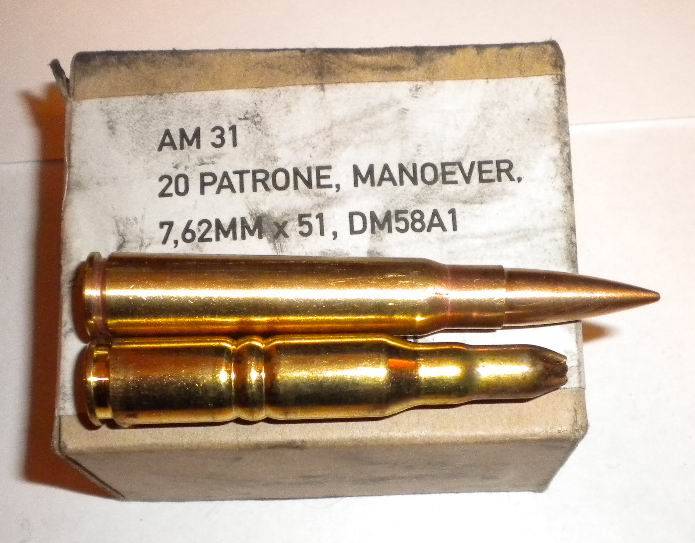 On January 3, 1956, an order was signed at the DAG factory in the city of Fürth-Stadeln to switch to the production of a cartridge of 7,62 x 51 mm.

The era of the German 7,92 mm cartridge is over.

By this time, Sauer & Son had dealt with rifle barrels and, taking over acceleration, began to produce barrels not only for rifles, but also for machine guns. Yes, the machine gun of the new army was also very necessary, therefore, under the new cartridge 7,62 x 51, the famous MG42 was redone. 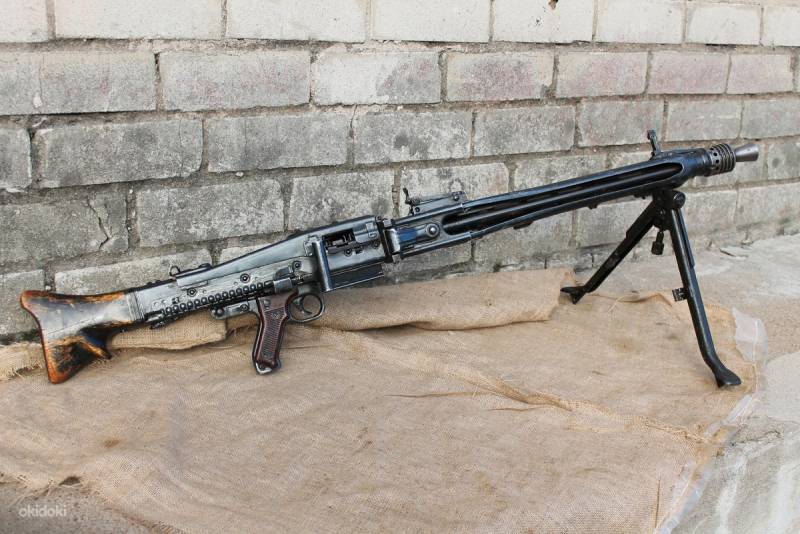 The alteration did not work out right away: if the FAL fired with the new cartridge quite well, then the “bone-eater” had problems with reliability. And the problems are complete.

In general, not bad for a start, but to fight this would be imprudent. The cartridge required to bring to mind.

At the same time, they decided to start producing a plastic training cartridge.

But while the cartridge was finished, problems began with the FAL rifle itself. The Belgians were constantly making changes, as buyers demanded following the results of numerous competitions. And in the end, the Belgians changed the design of the gas outlet and the diameter of the gas outlet.

But by that time, Heckler and Koch already had G3, so the Germans weren’t very upset and continued to develop a plastic blank cartridge for G3. 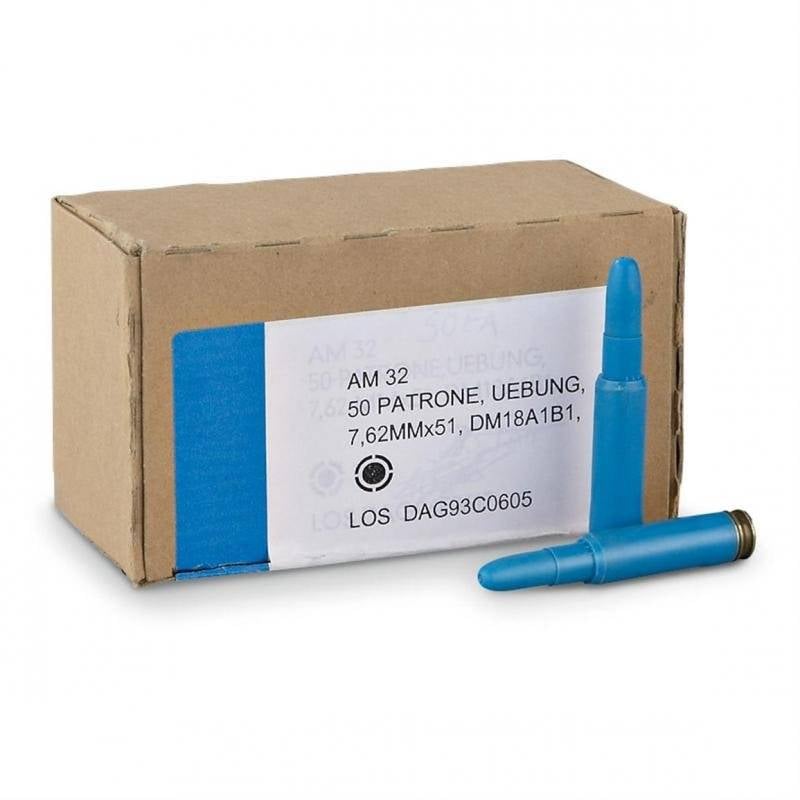 And with a machine gun he helped ... the Soviet Union!

By the summer of 1956, the situation with MG42 was virtually deadlocked. The machine gun stubbornly did not want to shoot a new cartridge. Neither Belgian nor German.

And then suddenly Johann Grossfuss returned from the Soviet Union, the former director and owner of the factory in the city of Döbeln, where, in fact, the MG42 machine gun was designed and tested.

In 1945, Grossfuss was unlucky; he ended up in our sector of responsibility. He was instantly calculated, recognized as an entrepreneur who helped the Wehrmacht and had income from it and was indirectly guilty of deaths.

In general, Grossfuss served 8 years and returned with a great desire to establish production of MG42 for the glory of the emerging Bundeswehr in his former, and now owned by Rheinmetall plant.

Grossfuss was not first allowed to develop, but then the Bundeswehr structures still decided that such a valuable shot should not disappear.

As a result, the machine gun was taught to shoot, and by 1957 the Bundeswehr actually had two of the three components: it had an automatic rifle and a machine gun. Yes, in 1959, the domestic G3 replaced the foreign FN FAL. 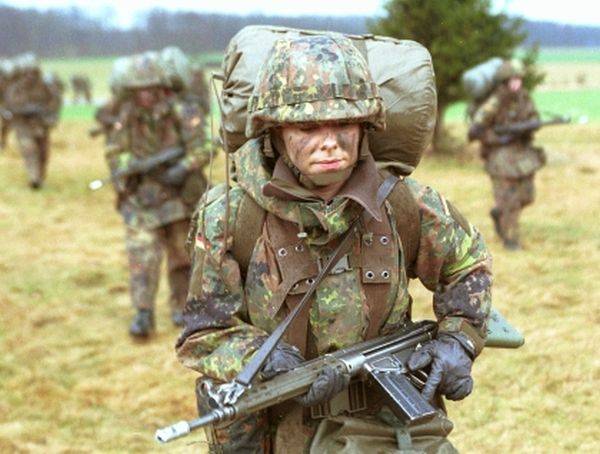 In 1955, the Bundeswehr was formed in Germany. The task of the new army was clear: integration into NATO. In a very short time, the Germans did an excellent job of developing both a new cartridge and their weapons under the NATO standard cartridge.