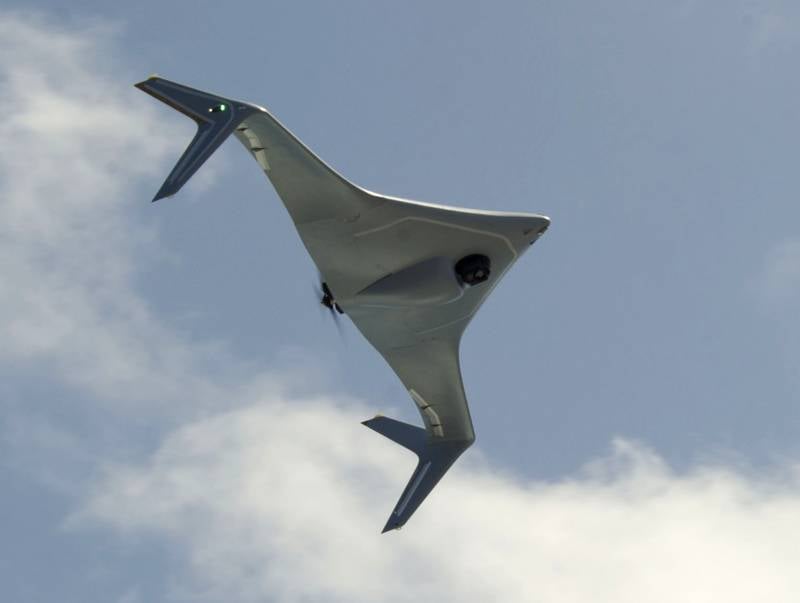 The “flying wing” scheme has long attracted aircraft manufacturers and developers of unmanned aerial vehicles, both in our country and abroad. To date, foreign states have created a number of interesting UAVs of similar architecture, which differ in one or another feature. Consider the main examples of such a technique and its characteristic features.

A full range of

The development of UAVs of different classes is now engaged in many countries, including previously not developed aviation industry. As a result, on the market and in parts there is a large number of types of drones of different schemes, classes and tasks. The sphere of flying wings also complies with these trends - it shows developments of all the main classes.

However, there is a certain bias. Thus, the “flying wing” scheme abroad is not particularly popular in the field of light and ultralight military UAVs. The most famous and successful developments of this kind are classified as heavy reconnaissance and / or striking machines. 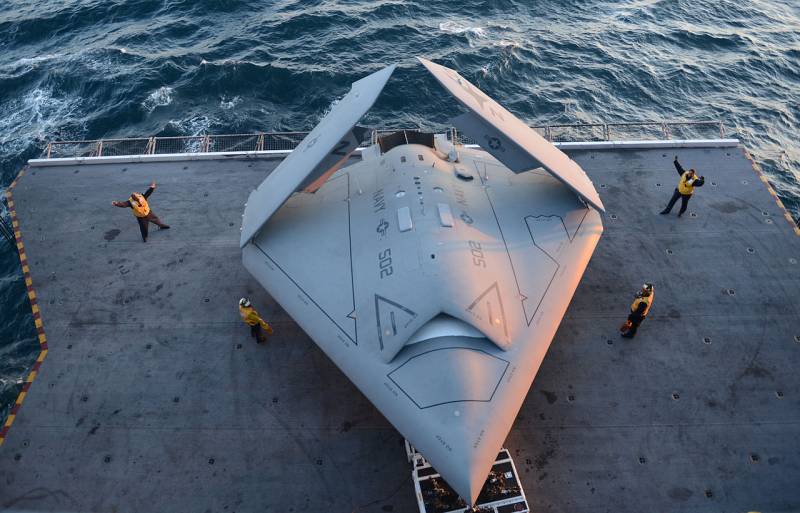 Experienced X-47B on an aircraft carrier, 2013. Photo by US Navy
This distribution of development by class is due to the special capabilities of the aerodynamic design. Often, it is the flying wing that gives the optimum ratio of flight performance and payload necessary for complex tasks. In addition, in some situations, such a scheme is inferior to normal in one way or another. Close schemes such as tailless are also actively used.

One of the first unmanned flying wings that reached full operation was the American KillerBee / Bat designed by Swift Engineering and Northrop Grumman. Its first modification had a wingspan of approx. 3 m and could carry a load of up to 14 kg. Subsequently, a new version appeared with an increased wing and a load of up to 45 kg. All UAVs in this series are equipped with electric motors and are designed to work with reconnaissance equipment.

Lockheed Martin RQ-170 Sentinel reconnaissance UAV was widely known at one time, but most of the data about it is still classified. This unit has a swept wing with a wingspan of at least 12 m and is equipped with a turbojet engine. According to various sources, it carries a radar station, radio-technical and optical reconnaissance systems, etc. The possibility of using weapons is mentioned. 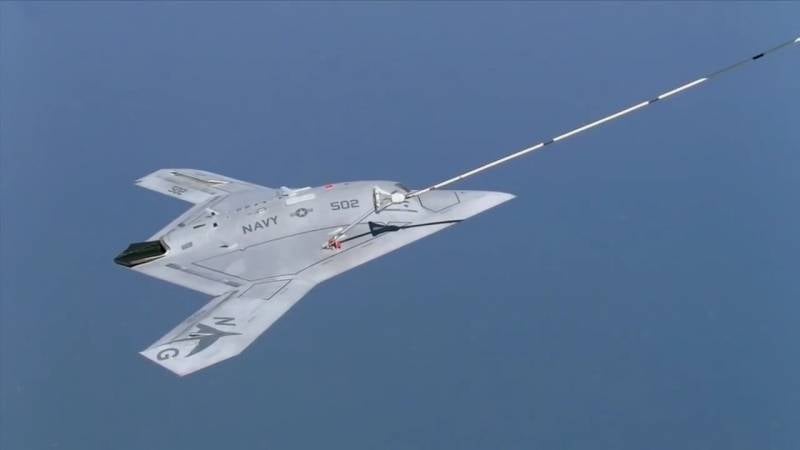 X-47B automatically receives fuel. Photo by US Navy
In 2011, under unclear circumstances, one RQ-170 landed in Iran. Local experts carefully studied it - and soon the Iranian industry released several new flying wings at once. The full-size “copy” of the American UAV was the product “Shahid-171” or “Simurg”. There is also a smaller “Shahid-191” / “Saegekh”. However, the subject of flying wings was worked out by Iran, and before receiving the American model, several light samples of this kind are known.

Of great interest is the Northrop Grumman X-47B project, whose goal was to create a heavy UAV for operation on the deck of an aircraft carrier. The product with a wingspan of 19 m (folding up to 9,4 m) had a maximum take-off weight of more than 20 tons. The turbojet engine provided high subsonic speed. The wing provided for two compartments for equipment or weapons with a carrying capacity of 2 tons. The X-47B could carry out reconnaissance and use weapons or carry out refueling of other aircraft.

Its projects of unmanned flying wings are available in Europe. So, in 2012, the first flight of the nEUROn UAV, developed by several countries under the overall leadership of the French company Dassault Aviation, took place. With a range of 12,5 m, such a device has a maximum take-off weight of 7 tons and should carry up to 450-470 kg of weapons or special equipment. 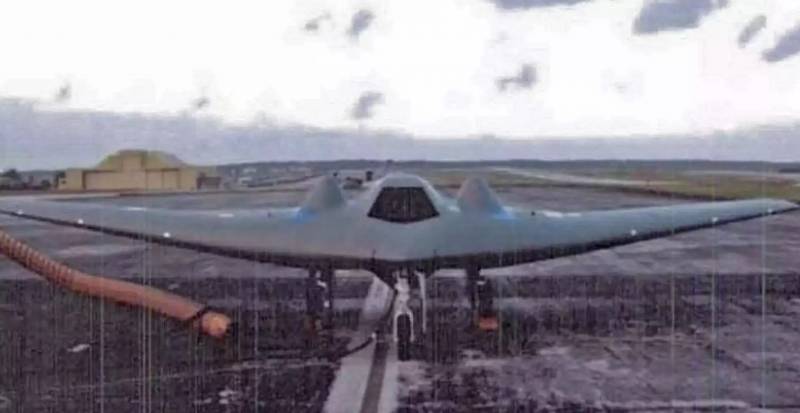 One of the few photos of the secret UAV RQ-170. Wikimedia Commons Photos
The direct competitor of this UAV is the Taranis product from the British BAE Systems. A turbojet subsonic UAV with a 10-m wingspan can carry various equipment and weapons necessary for a specific mission.

It should be noted that this is not all UAVs of the “flying wing” scheme created in recent decades. Within the framework of the current “boom” of drones, from the beginning of the current century similar vehicles of different classes are created and tested in different countries, created for experiments or for operation in the army. It is obvious that in the future the number of such projects will constantly grow.

The flying wing has several advantages, and one of the main ones is the possibility of reducing the visibility of the aircraft for radar. This is actively used in modern projects - and almost all of the flying wings of the new types are "stealth".

It seems that the Lockheed Martin company has achieved the greatest success in this area. Its UAV RQ-170 is known as one of the most secretive in its class. According to various sources, this is ensured both by a special form of the glider, which provides re-reflection of radio signals, and by materials of construction that attenuate reflected radiation. However, the design features are not officially disclosed - as well as the characteristics. 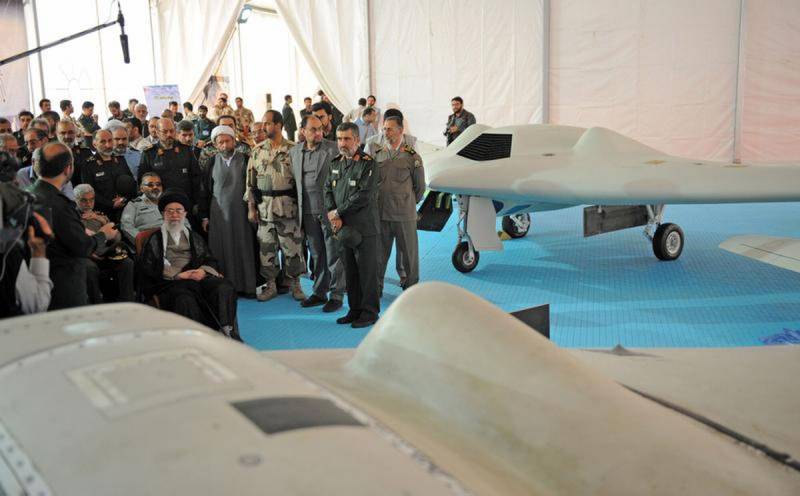 Iranian leadership gets acquainted with the captured RQ-170 (in the foreground) and with developments based on it, 2014. Photo by Defensenews.com
In July 2016, as part of the flight tests of the UAV, Dassault nEUROn performed several flights over the aircraft carrier Charles de Gaulle and escort ships. During these events, the drone’s ability to detect large surface objects and the ability of ships to detect an inconspicuous vehicle was studied. In addition, we worked on the interaction fleet and UAV. Unfortunately, the most interesting details from a technical point of view were not reported, however, the goal of such exercises could well be to work out issues of visibility.

From other aerodynamic schemes, the “flying wing” is distinguished by the increased internal volumes available to accommodate the units. Specific contours impose some limitations, but the right approach allows you to get all the desired benefits.

Most often, in foreign practice, the available layout space is used to place fuel tanks, which allows to increase the flight range. In addition, through the use of appropriate equipment, the UAV can become an air tanker. The fundamental possibility of this has already been confirmed by an experienced X-47B. 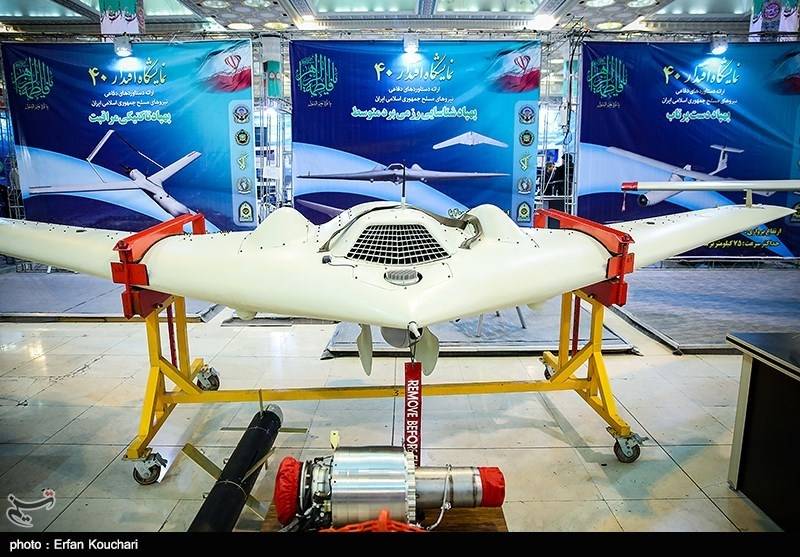 Iranian UAV "Shahid-191". Photo Imp-navigator.livejournal.com
Almost all heavy UAVs also have internal compartments for weapons or other payloads. The possibility of their organization is also associated with the available volumes inside the wing. However, almost all attack drones can carry only a few weapons - due to the limited size of the airframe and, accordingly, the cargo compartment.

The space inside the RQ-170 was used in an interesting way. According to some reports, the antennas of its radar and RTR are located inside the leading edge and in other parts of the wing. Thus, not only volume, but also area is effectively used.

The specific aerodynamics of a flying wing imposes certain limitations. So, such a UAV is not stable in course and may experience problems with pitch control. In modern projects, such problems are solved with the help of advanced control tools that receive information from various sensors and quickly respond to emerging situations. 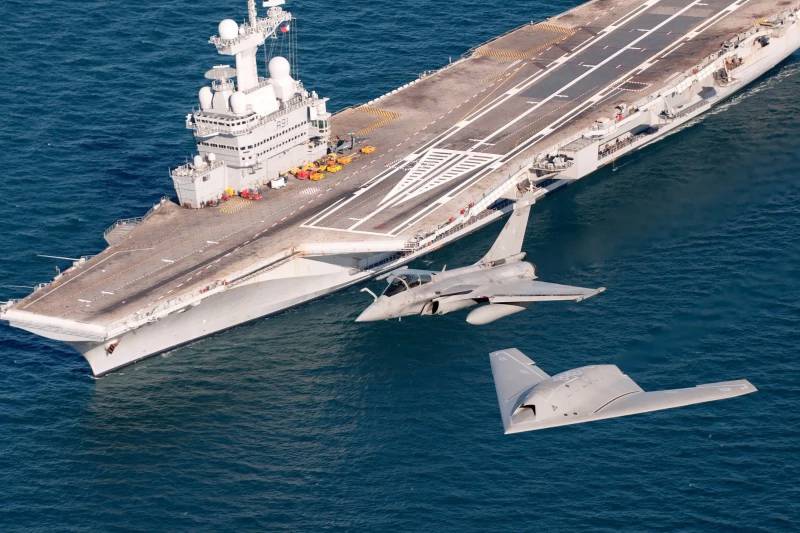 Dassault nEORUn and escort aircraft carrier Charles de Gaulle. French Defense Ministry Photos
The “flying wing” scheme performs well only at subsonic speeds. Because of this, modern UAVs of this kind have limitations on flight speed, and over very wide limits. So, the average Northrop Grumman Bat accelerates to just 166 km / h, and the heavy Dassault nEUROn is capable of developing 980 km / h. At the same time, larger devices are able to remain in the air for hours and show a range of more than 2-2,5 thousand km.

However, in the field of UAVs with increased range and duration of flight, foreign flying wings do not yet compete with the normal scheme adapted for such tasks. The swept wing of large relative thickness in terms of bearing capacity loses to a thin straight with a large elongation.

As you can see, foreign UAV developers have long noticed all the advantages of the “flying wing” scheme and are using it most actively. However, this version of the aerodynamic shape is used only in certain cases, when it is justified. In other situations, other schemes turn out to be more useful or convenient from a technological point of view, including normal.

Currently, at various stages of development, testing and operation, there are a number of unmanned aerial vehicles of a number of classes and for various purposes. Some of the promising developments in the future will go into operation and will solve real problems. In the distant future, UAVs will probably be able to partially replace current manned aircraft. And it is quite possible that among them there will be flying wings.