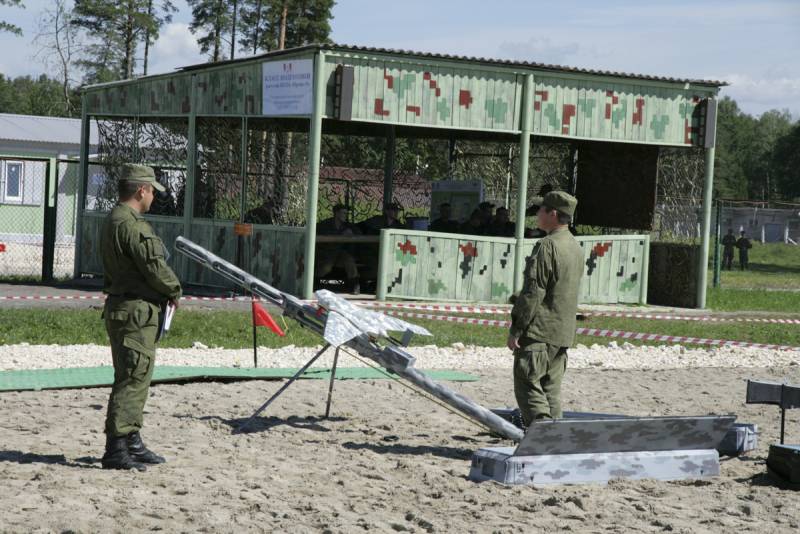 Preparation for the launch of UAV "Eleron-3". Photo by the Ministry of Defense of the Russian Federation / mil.ru

To date, a great many unmanned aerial vehicles have been created in our country and abroad. aviation complexes for various purposes. During the construction of the UAV, a wide range of ideas and solutions are used, incl. all major aerodynamic schemes. The “flying wing” layout is quite popular because it offers well-known advantages - and at the same time leads to some limitations.

In our country, the topic of the flying wing was taken up several decades ago, but this direction did not have much success. In the field of manned aviation, other schemes were developed, incl. structurally similar, such as tailless or integral layout.

However, the situation has changed dramatically with the beginning of the active and massive development of unmanned aerial vehicles. In this area, it was possible to more fully realize - and bring to operation - all the main advantages of the "flying wing" in different classes of equipment. Consider the most interesting examples of the application of such a scheme in domestic UAVs.

At the beginning of the two thousandth, the first UAV of the future Eleron family from the ENIX company appeared. It was an ultralight vehicle weighing 3400 g with a wing span of less than 1,5 m. With the help of an electric propeller group, it could reach speeds of more than 100 km / h and fly for 70-75 minutes. The payload of the drone was day and night cameras. 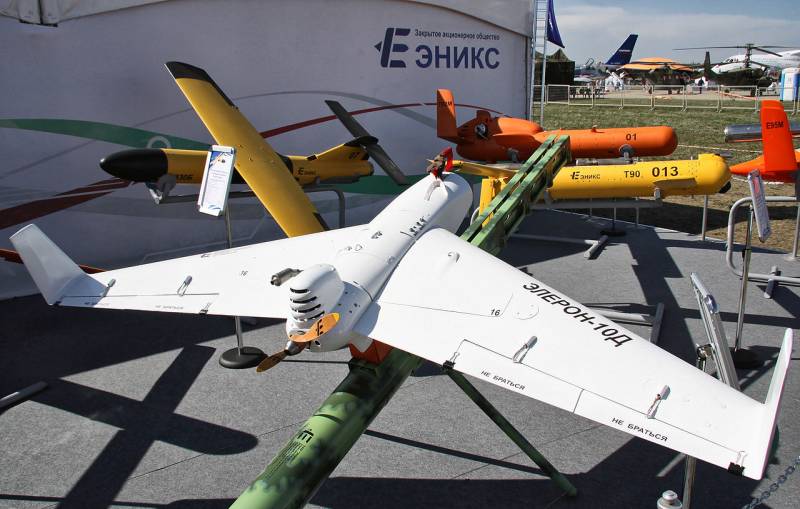 UAV "Eleron-10D". Photo by Vitalykuzmin.net
In the future, new samples of the family, such as Eleron-10, appeared. Its wing increased to 2,2 m in scope, and the mass grew to 15,5 kg. Due to the larger and more capacious batteries, it is able to remain in the air for 2,5 hours and work at a distance of at least 50 km from the operator (with video transmission). All samples of the Eleron family have found application in the army and law enforcement agencies.

You can also note the UAV line ZALA 421 from the company ZALA Aero Group. This family includes tailless birds, flying wings, and even a convertiplane and multicopter. Devices weighing in kilograms can fly tens of kilometers and carry reconnaissance equipment. Some of these samples are accepted for supply and are commercially available. Standing alone is the barrage of ammunition ZALA CUBE. This product also has the features of a flying wing.

For a number of reasons, the “flying wing” scheme did not find application in domestic middle-class projects, but was useful in creating some heavy designs. Due to the size and functions offered, such projects have invariably attracted the attention of the public and specialists.

In 2007, RSK MiG introduced a full-size prototype of a heavy strike UAV Skat. The project envisaged the construction of a machine weighing 20 tons with a wingspan of 11,5 m and a turbojet engine. Estimated speed reached 850 km / h, range - 4000 km. The drone was supposed to take on board up to 6 tons of weapons at 4 points of internal suspension. Together with the Skat prototype, several types of guided aircraft weapons were demonstrated, compatible with it. 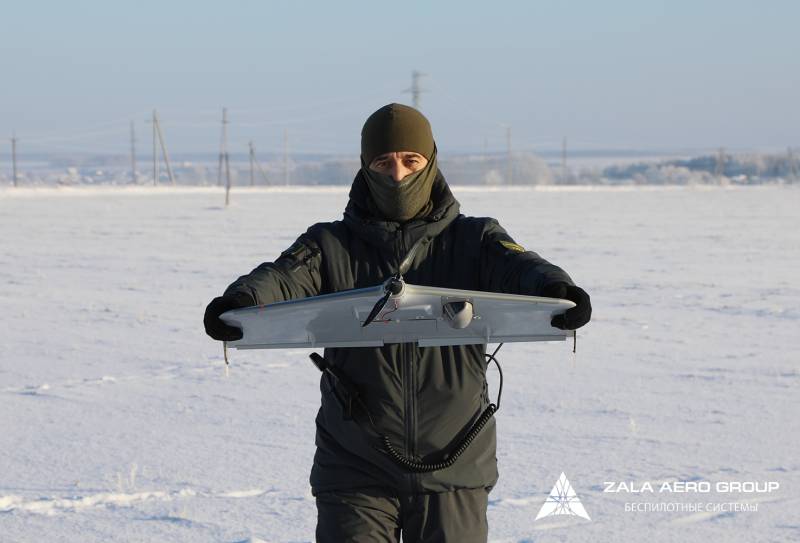 Ultralight ZALA 421-08M drone - it can be launched "with hands". Photo by ZALA Aero Group / zala.aero
In the future, the fate of the project remained vague. He was remembered every few years, but without mention of any progress. At the same time, it was alleged that the work stopped and continued. Last news this kind appeared in a year ago - and since then no new messages have been received.

In June 2018, the experimental heavy UAV S-70 Okhotnik developed by the Sukhoi company was removed from the assembly shop. The wing span of this machine is estimated at 18-20 m, take-off weight - at least 20 tons. One turbojet engine is used. The payload is several tons in the internal compartments. According to various sources, the UAV is made pre- or transonic. A developed automatic control system is used, capable of interacting with the operator or other aircraft.

The first flight of the Hunter took place on August 3, 2019, and flight tests are still ongoing. S-70 operates independently and in conjunction with the Su-57 fighter. When the development work is completed and mass production begins, it is unknown.

The advantages of the flying wing scheme over other aerodynamic configurations are well known. Consider why it turned out to be useful in creating some domestic (and not only) unmanned aerial vehicles. 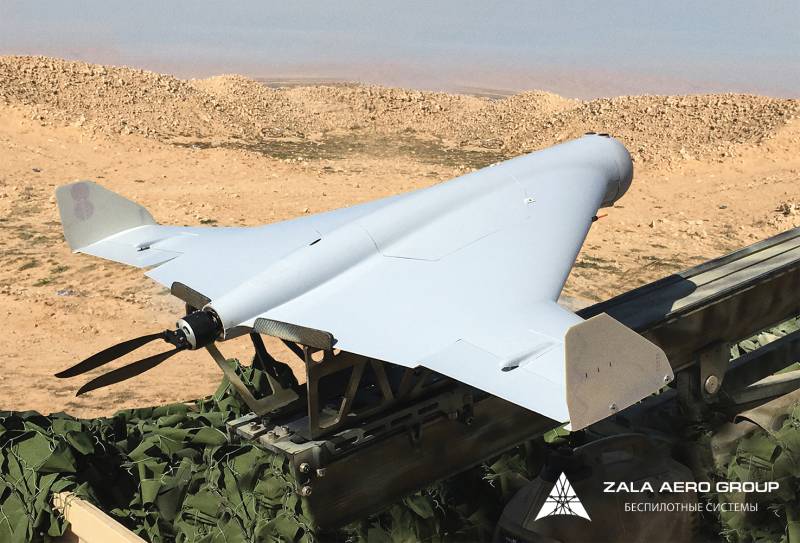 Barrier ammunition ZALA CUBE. Photo by ZALA Aero Group / zala.aero
The main advantage of the scheme is the ability to turn all or almost the entire surface of the airframe into a bearing - with a corresponding increase in flight performance and / or carrying capacity. This feature of the circuit allows relatively light UAVs with a small fuel supply or limited-capacity batteries to remain in the air longer than traditional designs of similar sizes and weights.

The flying wing offers advantages in terms of available layout spaces. The necessary components and assemblies can be placed not only in the fuselage, as in the normal scheme, but also in the center section smoothly coupled to it or in the wing of increased thickness. Such capabilities are best demonstrated by the heavy Scat and Hunter. Inside their gliders, it was possible to place quite large turbojet engines, cargo compartments and tanks with a large amount of fuel. Light UAVs are built in a similar way, although with understandable differences.

An important feature of the flying wing is the potential in terms of stealth. Smooth contours of the desired configuration in combination with the right choice of material can dramatically reduce the effective scattering area. According to various estimates, such techniques were used in the Hunter and Skat projects. The same applies to a number of foreign developments.

With all its advantages, the flying wing is not without drawbacks, which have to be fought. Often, these problems are too serious and lead to the rejection of such a scheme in favor of other layouts. 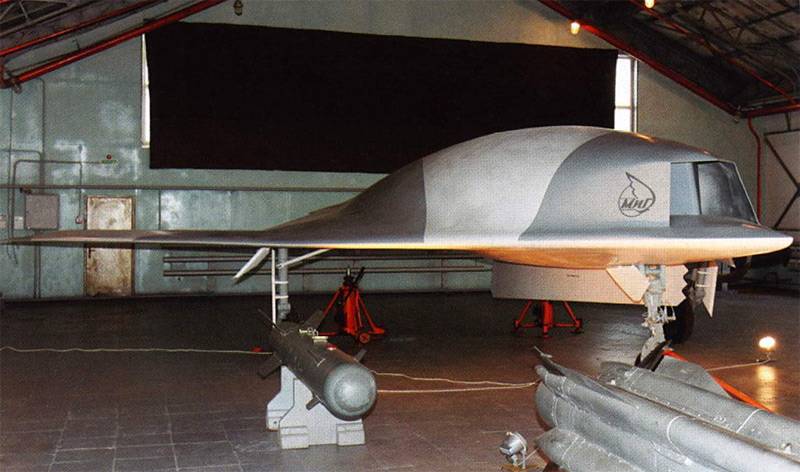 Prototype UAV "Skat" from RSK "MiG". Photo Airwar.ru
One of the biggest difficulties in creating flying wings, including UAVs associated with the layout of the necessary units within the volumes of a specific configuration. The largest nodes can be placed only inside the protrusion-fuselage or center section, the volume of which is not infinite. The expansion of the available compartments requires the processing of aerodynamics, which is not always possible or appropriate.

Fortunately, such issues are successfully resolved in the early stages of design. In addition, in the UAV sector there are some features that facilitate the assembly of units. So, the drone does not need a cabin and related systems, and control is carried out by electronics, which does not require much space.

A serious problem is the behavior of a flying wing in the air. Without vertical plumage, such an aircraft cannot show acceptable ground stability. There is also a problem with providing management. The traditional elevons at the trailing edge of the wing do a good job of roll control, but they may show poor pitch control due to insufficient offset from the center of mass. Without vertical plumage, the problem of providing yaw control arises.

Stability along the course can be ensured with the help of bent endings, as on some "Ailerons" and parts of UAVs of the ZALA brand. Course control can be carried out at the expense of fissile elevons, like the "Slope". A radical solution may be to abandon the “flying wing” scheme in favor of a tailless tail with a keel and a full rudder. 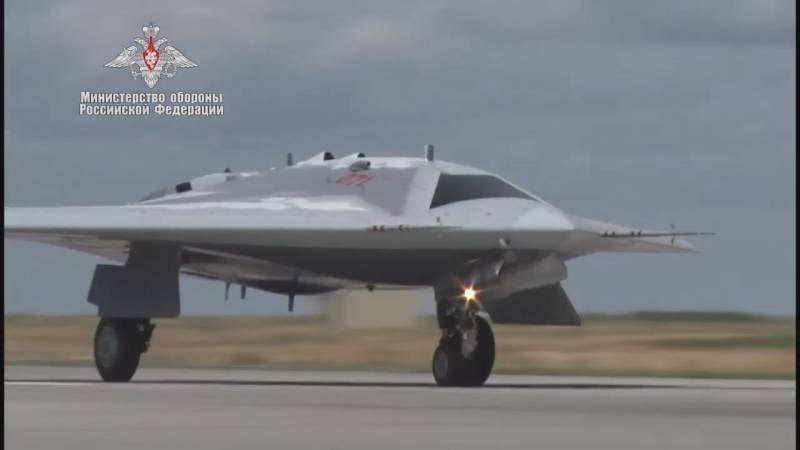 The latest heavy UAV S-70 "Hunter". Photo by the Ministry of Defense of the Russian Federation / mil.ru
The solution to all problems with stability and controllability contributes to the active development of autopilots and electronics in general. Modern UAVs of all major classes use high-speed automation and advanced algorithms that can support flight with given parameters and respond to undesirable phenomena.

In general, the “flying wing” scheme at the current level of technology development is useful and can be used in various projects. Its characteristic features can be used in solving certain problems, receiving serious benefits and advantages over other schemes. However, due to limitations and shortcomings, the flying wing does not become a universal and unambiguously positive decision - and therefore cannot supplant other schemes.

UAVs of other schemes are still being created and implemented. So, along with the Eleron flying wing, the Orlanes of the normal layout are actively used. Simultaneously with the strike “Hunter”, “Altius” is tested with a full fuselage and a narrow straight wing. Moreover, in some classes of drones, the flying wing is not yet used, for example, in the field of medium-range long-range vehicles (MALE).

Thus, the creators of new aviation equipment need to remember the existence of different aerodynamic schemes and understand their characteristic features, which will allow you to choose the best solutions for specific projects. With this approach, new models of unmanned or other equipment will have an optimal appearance and characteristics - regardless of the presence or absence of a pronounced fuselage and plumage.

Ctrl Enter
Noticed oshЫbku Highlight text and press. Ctrl + Enter
We are
Domestic unmanned aircraft (part 3)An-12 in Afghanistan
50 comments
Information
Dear reader, to leave comments on the publication, you must to register.