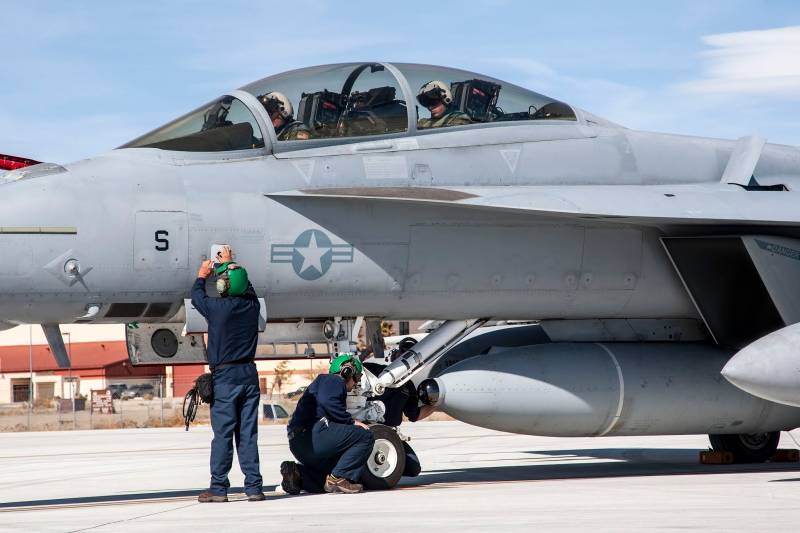 Count on the third or second!

Last year, the U.S. Navy finally bid farewell to the F / A-18C Hornet fighter, however история his younger brother, Super Hornet, is far from over. Firstly, this machine is actively “wooed” for export, and secondly (and this, perhaps, even more important), the Americans themselves will actively use it. And, probably, not for several decades: the aircraft is actively developing, acquiring new opportunities. Recall this spring, the U.S. Navy received the last F / A-18 Block II Super Hornet fighter. Fired it no less than fifteen years, since 2005 (the very first Super Hornet began to operate in 2000).

Soon a fundamentally new version of the combat vehicle will say its weighty word, the capabilities of which will bring it closer to the fifth generation. Recall, the rollout of the first two Super Hornet versions of Block III was carried out by Boeing in May of this year. And most recently, the first F / A-18 Block III Super Hornet test plane made its first flight at the Boeing plant in St. Louis, Missouri.

At first glance, the new car is almost impossible to distinguish from any of the earlier Super Hornet. What is the peculiarity of the aircraft? The one that will allow him to stand on a par with the best modern fourth-generation fighters. The car that took off the day before in the broad sense is a prototype. She, like the second such fighter, only partially has the signs of Block III and will be used for testing technologies. To answer the main questions you need to look at the production aircraft, which we will soon be able to see.

New machines will differ from Block II in a number of systems and subsystems. The main differences:

Conformal fuel tanks. The most important visual difference by which it will be possible to determine the combatant Block III is the conformal fuel tanks. Their prototype is devoid of. Such tanks will allow you to take more fuel and have less resistance to air flow than the suspension models that can be seen on the Super Hornet. According to Boeing itself, more than 1500 kilograms of fuel will fit in conformal tanks. The “usual” Super Hornet has a mass of fuel without the use of outboard fuel tanks of 6780 kilograms. The growth of the combat radius, presumably, will be more than substantial: according to a number of sources, it will be approximately 300 kilometers. 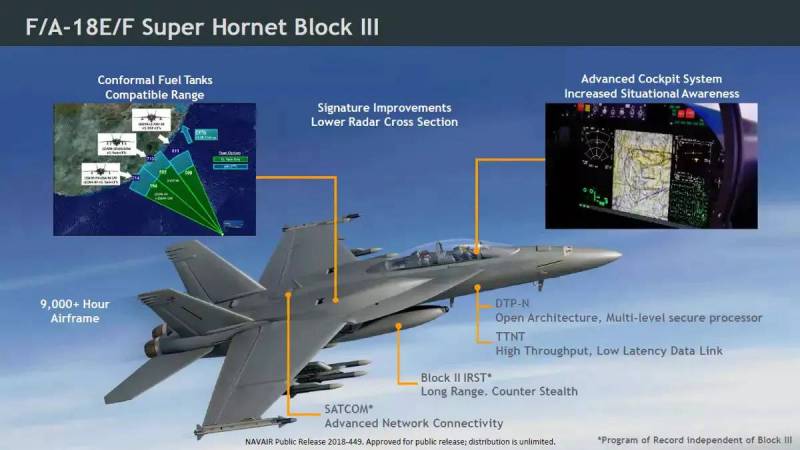 IRST Block II Sensor Americans are steadily increasing the ability of Super Hornet to detect stealth aircraft. Back in January, the U.S. Navy's F / A-18 Super Hornet fighter was tested with the Infrared Search and Track (IRST) Block II hanging infrared container, capable of (at least in theory) effectively detecting stealth even at a relatively long distance. A definite plus is that the work of the passive sensor cannot be detected, unlike the work of the radar station. It should be understood that the IRST Block II will never be a complete replacement for the radar and has never been thought of as such. In general, it can be called the second most important improvement of the new Super Hornet.

New display. Another significant improvement was the new display in the cockpit, measuring 10 x 19 inches. To understand how important this improvement is, just look at the old “miniature” displays of the earlier Super Hornet, which look archaic even against the background of the displays of the Russian Su-35C, not to mention the F-35. With the new solution, the Khornet pilots will come closer in terms of situational awareness to fifth-generation fighter pilots. Approach, but do not turn into them overnight. Do not forget that the F-35, in principle, is much more advanced in this regard than any other existing combat aircraft. 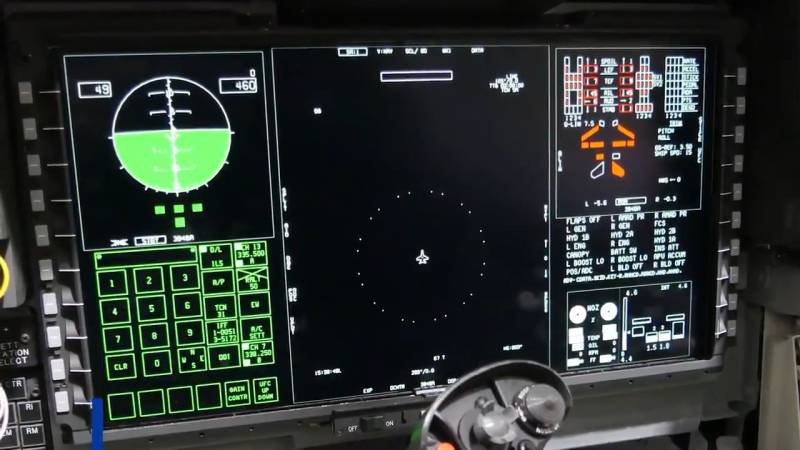 Other innovations include a new on-board computer and a data exchange system that allows more efficient exchange of data with other combat units. In addition, the developers promise to extend the life of the aircraft up to 9000+ flight hours. 3000 additional hours were obtained by making structural changes to the production aircraft based on lessons learned from the F-18 operating experience. It is also worth noting that a number of improvements are classified as “trade secrets”. And not the fact that we will hear about them in the next few years.

There is a point of view that the Super Hornet will be protected by the “floppy” F-35, popularly referred to as the penguin, not too flattering for a fighter. In fact, this position is incorrect. To begin with, it is worth noting that the F-35 has quite satisfactory flight performance. At least by the standards of the fourth generation, except perhaps the Dassault Rafale and a couple of other machines of the 4 + (+) generation. The fifth-generation fighter carries in its internal compartments a solid arsenal of four medium-range AIM-120 air-to-air missiles, and in the future it will carry six such products. At the same time, the mass of the F / A-18 Block III Super Hornet will increase against the background of the early F / A-18s even more significantly, which cannot but affect its maneuverability. That is, before the F-35, he will no longer be able to boast of anything significant. 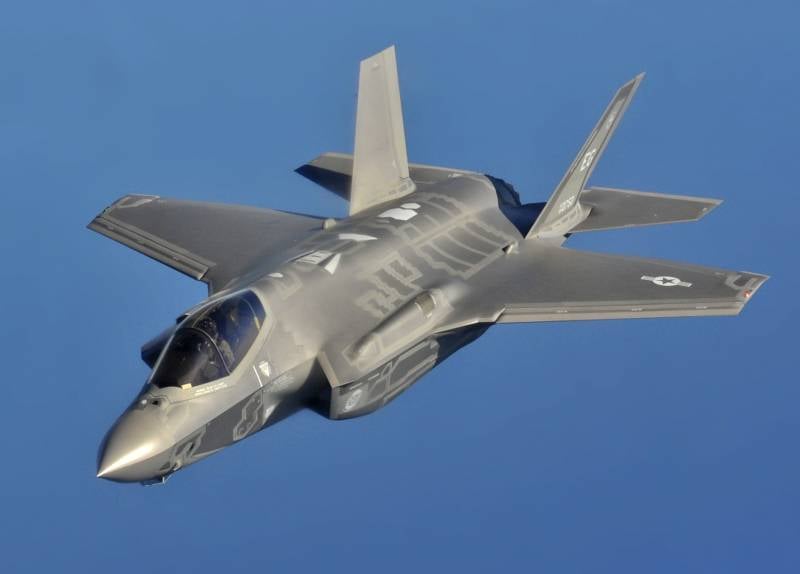 This does not mean at all that Block III is an “unsuccessful” fighter-bomber. The increase in combat range and good combat load make the F / A-18 Block III Super Hornet an almost ideal solution for a situation in which you need to “finish off” a weakened enemy, deprived of fighter cover and air defense. Another function of Block III is anti-ship. Recall, last year, anti-ship missiles AGM-158C LRASM entered service with the F / A-18E / F fleet United States: One Super Hornet can carry up to four LRASM missiles. Given the long range of the missile (presumably 900+ kilometers), the lack of full stealth on the F / A-18 Block III does not look as critical as if it was an air confrontation.

Thus, the F / A-18 Block III Super Hornet is not an F-35C bodyguard, nor a substitute for it, nor a demonstration of fifth-generation insolvency. The new aircraft will be something like a deck attack aircraft (of course, calling the F / A-18 “attack aircraft” is not entirely correct). Not being a stealth, the car will be significantly inferior in terms of the qualities of the F-35, but it will be able to surpass the latter in terms of price / efficiency if it comes to an enemy that does not have great military potential against the background of the United States (and most countries of the world relate to these).

In addition, Block III has a good export potential. In particular, he can win the continuation of the long-suffering Indian competition Medium Multi-Role Combat Aircraft (MMRCA), which now involves the purchase of 114 multi-role fighters. Success in this field can significantly strengthen the recently shaken position of Boeing.