Berets, caps and turbans: the uniform of the Spanish Civil War 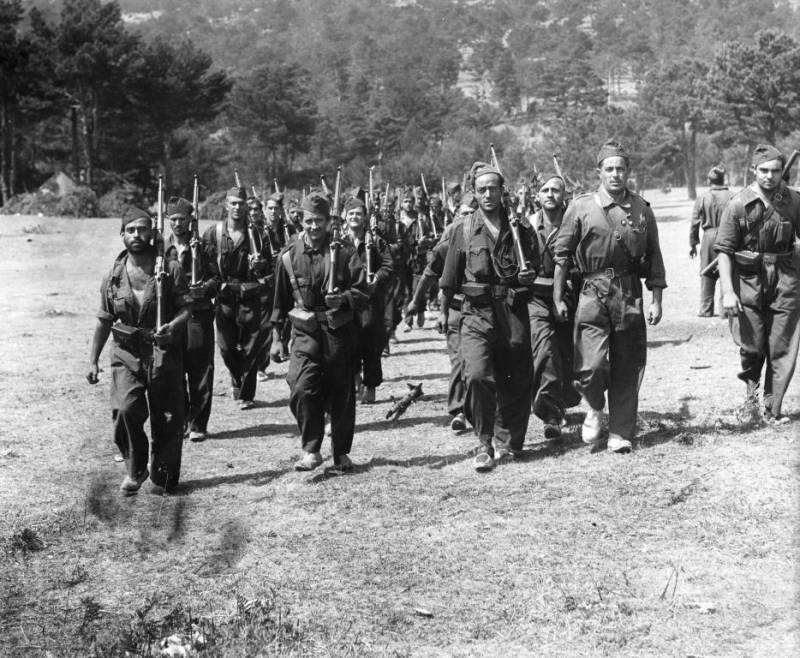 Uniforms are always interesting. Today we will get acquainted with the uniform of the parties in a somewhat unusual military conflict - the civil war of 1936-1939. in Spain where with weapons in their hands came the nationalists who stood for the preservation of traditional Spanish values ​​and the Republicans who sought to lead the country along the path of democratic development.

History arranged so that this internal conflict became in some way a dress rehearsal of World War II. Others even believe that it was in Spain that it began, because if the nationalists and their allies Germany and Italy had not won there, the latter would hardly have decided on a war in September 1939.

An addition to the uniform theme will be the English-language historiography of this interesting topic, or rather, a small part of it: several books by the famous British publishing house Osprey. In Russian, perhaps, it would be best to read the “Spanish Diary” by M. Koltsov, “In Memory of Catalonia” by J. Orwell and “For Whom the Bell Tolls” by E. Hemingway. However, Hemingway should name one more work: his play “The Fifth Column”.

So how were the soldiers who fought in Spain in 1936 dressed?

At that time, the Spanish national army wore a mustard green uniform. Officers wore overalls with four pockets (upper with a fold) and breeches of the same color or beige. Ordinary - short jackets with two pockets and straight trousers or breeches with fasteners on buttons at the shafts from top to bottom. The officers had black or brown leather boots, but they could wear high lace-up boots. With boots that did not have high legs, it was allowed to wear separate leggings of the same color or khaki wraps and white socks wrapped with a roller. The trousers of soldiers dressed in field uniforms should have been tucked in socks. Well, of course, the shoes of the rank and file were a little rougher than their officers. In general, the equipment of the Spanish army was like the French, including the cut of some elements of the uniform. The emblems of the military branch were sewn on the sharp corners of the collars, worn on the tops of caps, on the breast valves of the overcoat-drape. Pieces of caps also served to place insignia for officers. 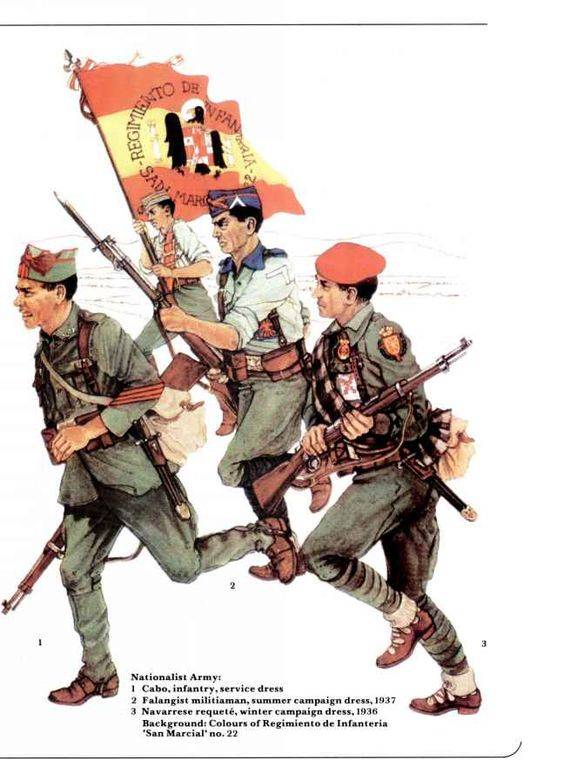 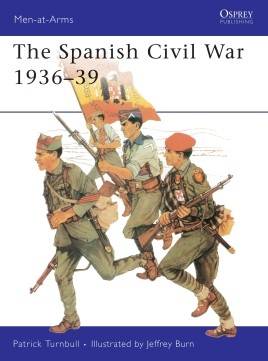 The British publishing house Osprey has published many books on the subject of the Spanish Civil War. Here is one of them
Privates and officers wore tall caps with a tassel in front, trimmed along the lobar seam and the edges of the side lapels with a piping. Moreover, on officer caps, the edging was gold. The color of the brush also mattered. Private and non-commissioned infantry officers had red tassels, but in aviation somehow green. Cavalry pilots had silver trim and insignia. The militants of the Spanish Phalanx wore blue caps. 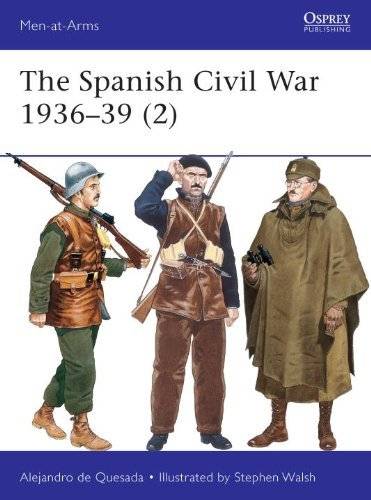 The positive aspect of these publications is that many of their authors are Spanish historians, and they write on the basis of well-known documents and materials
The soldiers of the Rekete corps (especially units from Navarra) were the most combat-ready units of the nationalist army. One of the main elements of their uniform was a red beret with a golden tassel. Many fighters of the prokete on the left of their chest had the patch “The Heart of Jesus” around which their mothers, sisters or wives usually embroidered a request to God to protect their beloved: “¡Detente! El Corazón de Jesús está conmigo! ” - “Wait! (appeal to the enemy pool. - Auth.) Let the heart of Jesus be with me! ” These stripes therefore began to be called "Detente." They were embroidered in large numbers by female carlist organizations of nationalists. On the left sleeve, the Rockete soldiers also wore an embroidered Burgundy cross, which was a symbol of the Carlist movement, and their Rockete officers - white lilies on the collar, which were a symbol of the Bourbon house. 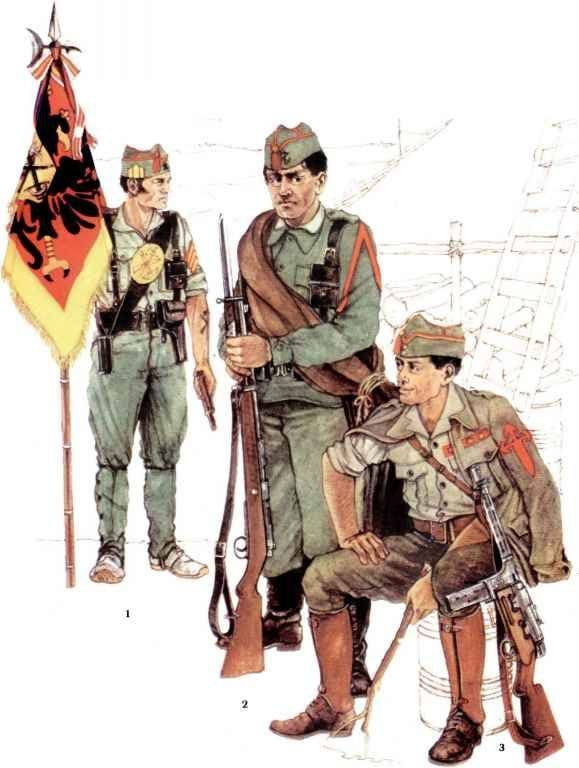 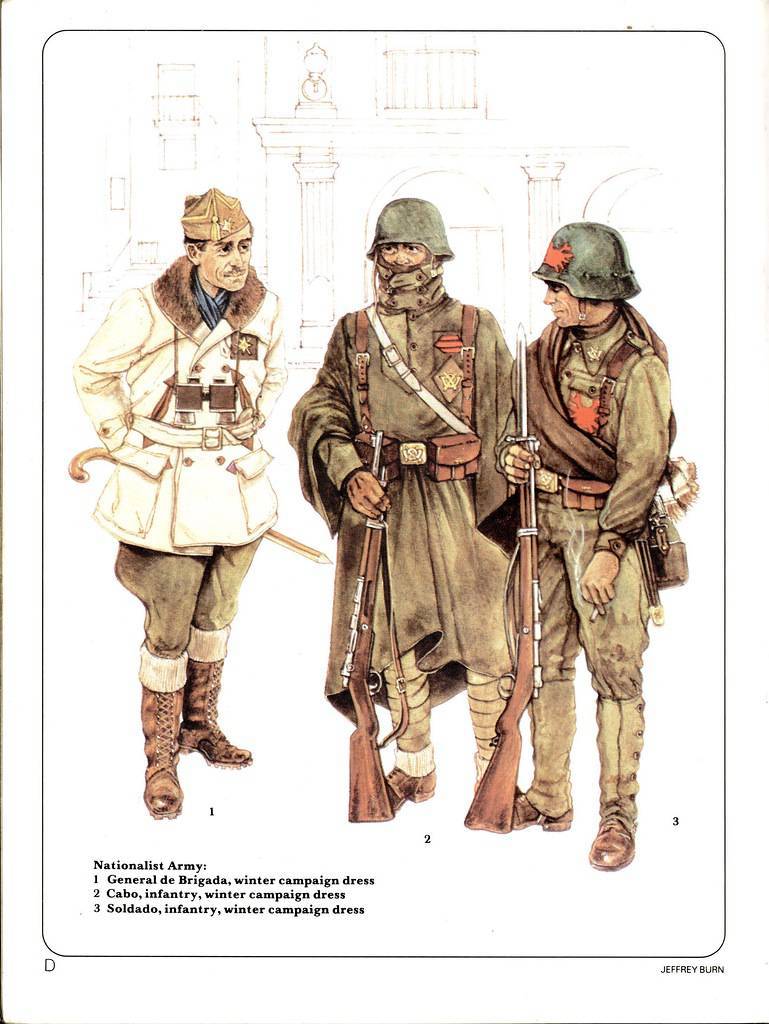 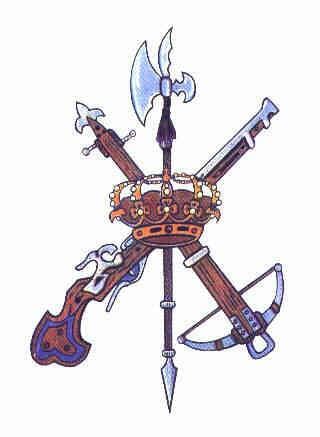 Emblem of the Foreign Legion of the Spanish Army 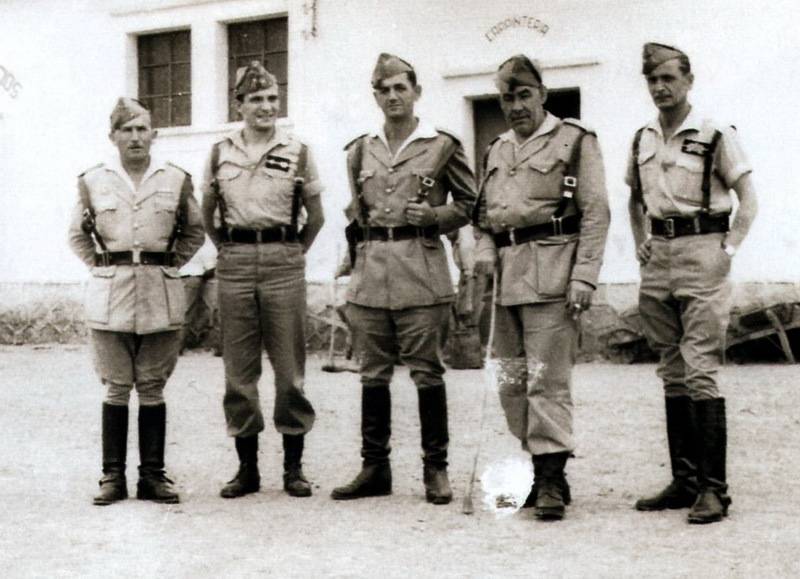 Group of Legion Officers, Summer 1936
But the Muslim parts of Moroccans, Mauritians and others like them in North Africa wore uniforms in the traditions of the Arab national costume. All of this, including the emblem of the insignia, was like an army uniform. Although the main vestment of all African Muslim compounds was usually a turban. 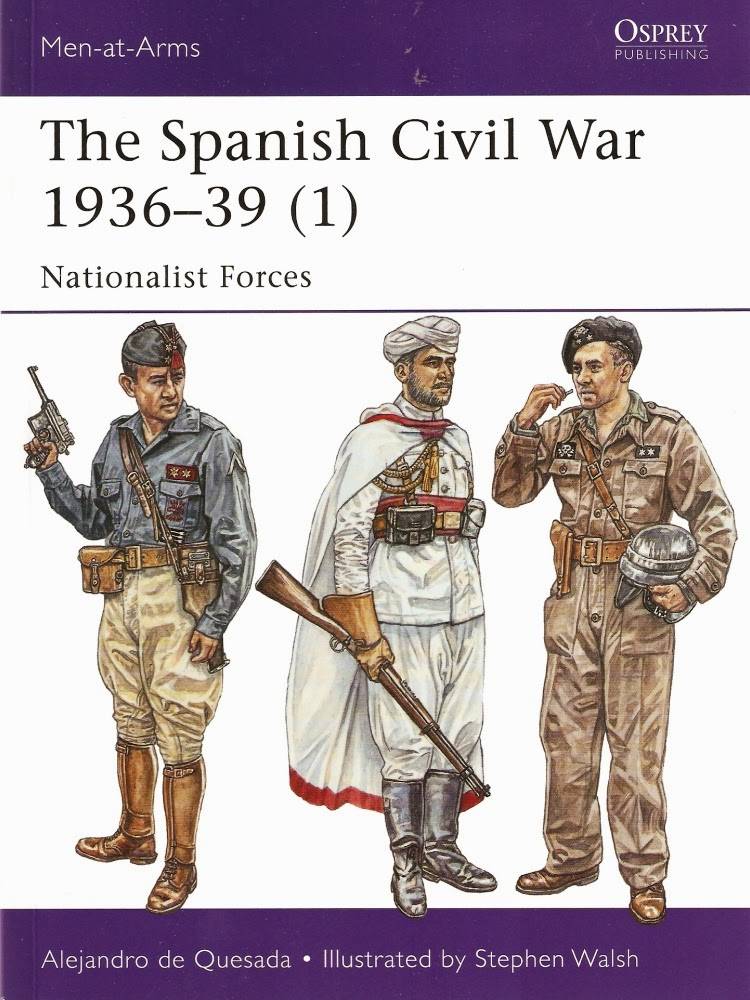 It contains a detailed account of the nationalist army along with illustrations by Stephen Welch
In general, there were enough bright emblems and stripes on the Spanish nationalist uniform, especially, of course, the red berets of the racket, with gold and silver tassels, which could be ragged, like pancakes, and small, neat, caught my eye. 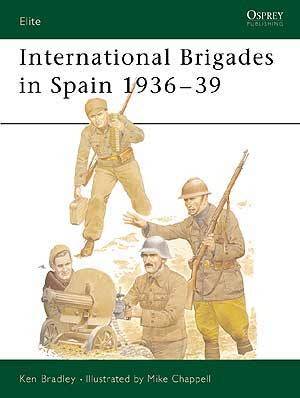 And here is the story of the famous Spanish inter-brigades. Illustrations by Mike Chapelle
So, a long (from the elbow to the shoulder), upward, narrow chevron made of red or green braid meant “soldier de example” - in our opinion, a corporal. The red triple galun (green in aviation), sewn obliquely above the cuffs on the left and right, denoted capo - corporal. The sergeant had sarhento, the galloons were already gold or silver: gold in the infantry and silver in the cavalry. The brichade (senior sergeant or sergeant major, wahmister) on the cuff or on his chest, as well as on the side cap, wore a double vertical patch of galun. 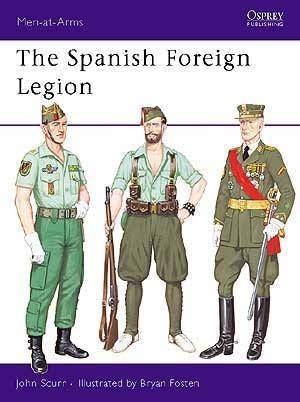 Spanish Foreign Legion. Everything about him is here ... Illustrations by Briand Faustin
The berets also wore insignia, both front and side, which depended on the rank. Officer stars on caps were worn in front under the tassel.

Stars officers were sewn at the bottom of the sleeve, either on the color flap on the left chest, higher than the pocket, and also on the cloak, jacket, or drape overcoat in the same place.

The red color of the valves corresponded to the infantry, the green was to the mountain rifle battalions, and the blue to the cavalry. A red and black valve distinguished artillerymen, dark red - engineering troops, yellow - designated military physicians, and black - tankers. But the pilots had a green trim for pilots, but chest stars and wings were sewn onto the red valve. 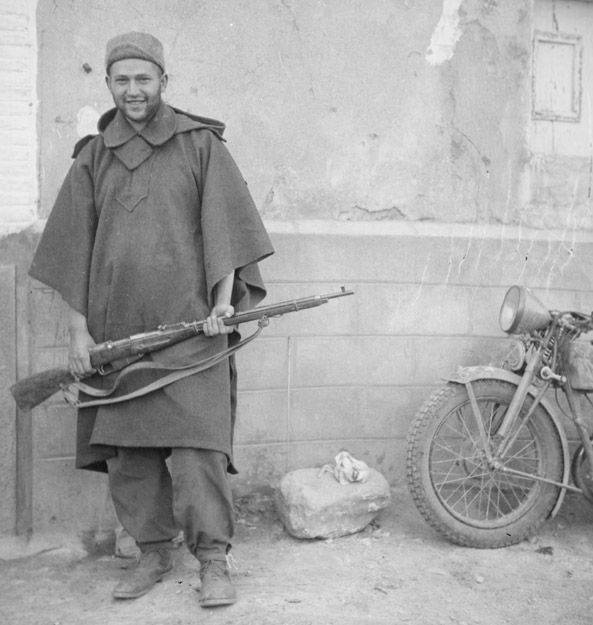 Republican army soldier in traditional drape overcoat
Officer ranks were indicated by asterisks: one golden or silver six-pointed star over the cuff relied on the alperes - the second lieutenant. The tenente (lieutenant) already had two stars, the captain - three, located in a triangle. The Comandante Major had a large eight-pointed star on the cuff; tenente coronel (lieutenant colonel) - two stars; coronel, colonel, - three located friends after another in one line. General de Brihada cuffed at the crosshairs of a saber and rod, embroidered in gold, wore a four-pointed star. Two smaller stars on either side of the same emblem relied on General de Davison. Also, these signs were on the corners of the collar, and on the cap they were shifted to the left. 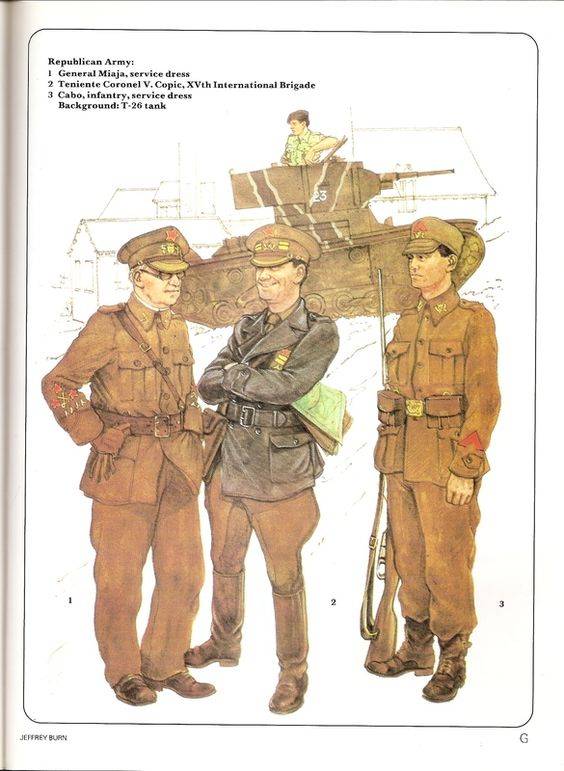 Army of Republicans: 1 - Commander-in-Chief of the Armed Forces of the Republic, General Miakha; 2 - shadow-coronel V. Kopik, commander of the XV international brigade; 3 - cabo, infantry. Behind - a Soviet tank T-26 in camouflage livery tank parts of republican Spain. Figure: Jeffrey Burna
In summer, instead of jackets and jackets, one could wear shirts of gray-green or beige color with a chest longitudinal patch corresponding to the rank. Leather jackets were usually issued to specialists in military equipment. The steel helmet had a hemispherical dome, a developed head, and a visor, which was very similar to the German helmet of the 1916-1918 model. Used in the Spanish army and the French helmets of Hadrian. On helmets, the emblem of the military branch was applied in front with a stencil. 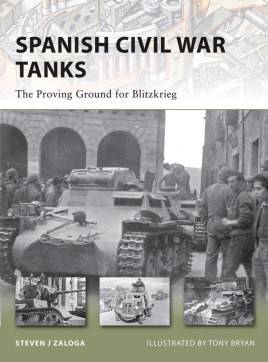 About tanks on the battlefields in Spain, Stephen Zaloga wrote very interestingly
Tanks were sorely lacking for the Republicans. Therefore, having a lot of factories at hand, they “riveted” such homemade armored vehicles in large numbers. The abbreviation on the boards meant one or another Spanish trade unions or organizations. For example: UHP, Union of Proletarian Brothers. 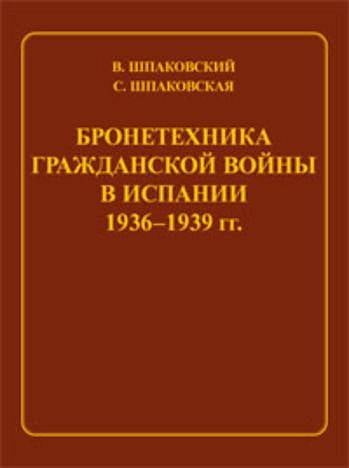 But this book can be read in Russian
Due to the fact that part of the army participated in the rebellion, and part remained loyal to the republic, in the first months of the civil war, the warring parties were very difficult to distinguish. Unless the parts of the “Spanish phalanx” and the “Rekete” division were striking with their blue shirts, caps and red berets, and basically the uniform of the soldiers was the same. It was necessary to vary. Therefore, on October 31, 1936, new elements of a military uniform and insignia were introduced in the republican army.

Ctrl Enter
Noticed oshЫbku Highlight text and press. Ctrl + Enter
We are
Tactical lessons of the last two wars of Iraq for an all-arms commanderMemo to mercenaries in Africa
Military Reviewin Yandex News
Military Reviewin Google News
27 comments
Information
Dear reader, to leave comments on the publication, you must sign in.