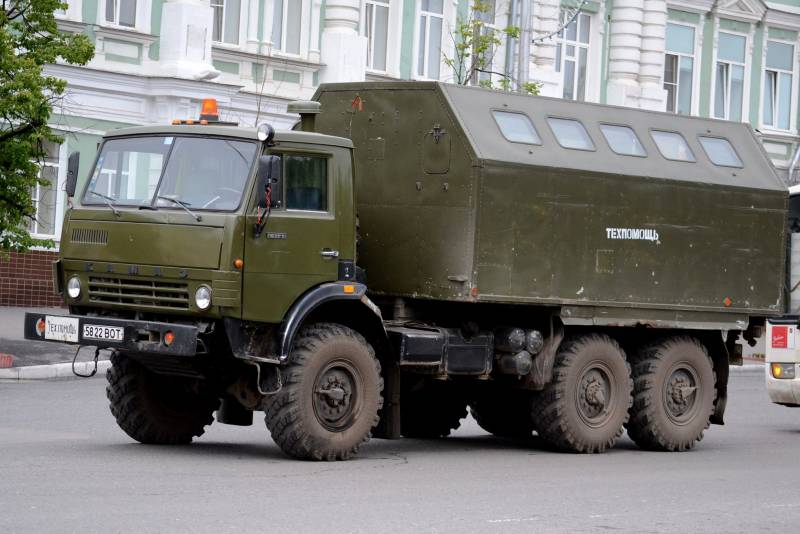 For most of our compatriots who served both in the Soviet Army and in the Armed Forces of Russia, the phrase “military truck” is likely to cause an association with the car of the Kama Automobile Plant, to which the epithet “legendary” is quite applicable. The machine, which was used in almost all military branches, not only traveled all over the USSR, but passed through the fiery roads of Afghanistan and other countries, where severe military necessity threw our soldiers into it, forever entered the Soviet and Russian military history.


The first batch of model 4310 cars left the assembly line built in record lines of a giant plant in 1981, and their mass production was launched 2 years later. No matter what they try to talk about the “extremely militarized” Soviet economy, the truck, originally designed and built for the needs of the army, was not the first in the line of the enterprise. At first, eight-ton heavy trucks, dump trucks and truck tractors in demand in the national economy went into the series. Then the turn came to the military. However, work on 4310 was carried out quite long and thoughtfully.

In 1969, when it was launched, the symbolic first bucket of land was removed at the construction of the Kama Automobile Plant. The authorship of the legendary car belongs to the developers of the Moscow Likhachev Automobile Plant (ZIL). As a matter of fact, they originally designed a model for their enterprise under the name ZIL-170, but it never reached mass production. But the ideas accumulated in the process were embodied in the KamAZ-4310. The state tested the new product in 1978, at the same time it was put into service - naturally, with the condition of eliminating the identified shortcomings.

What was the truck, which for many years was destined to become a faithful companion of our military? The KAMAZ-branded feature was a cabless cab: the engine was located under it. 4310 was a real all-terrain vehicle: six wheels and a permanent four-wheel drive, as well as a ground clearance of 365 mm gave him the opportunity to go where other cars were blocked. 4310 without problems took ups of 30% and forced water barriers to a depth of one and a half meters. In that case, if a car is caught in the convoy, it’s incapable of boasting such qualities, this truck had a powerful winch. The phrase “KAMAZ pull out” was quite commonplace in the Soviet Army (and not just one).

The carrying capacity of this machine was 5 tons (despite the fact that its own curb weight reached 8 tons and a half), but in addition, 4310 could easily transport a trailer of 10 tons on a relatively normal surface and up to 7 tons on a complete off-road. In an embodiment for transporting personnel, the car was equipped with an iron body with a wooden coating and folding benches, which could accommodate 30 troops. On top there was a tarpaulin awning with characteristic “bevels”. It should be noted that it was on the basis of this model that the domestic armored truck “Typhoon-1” was later created, which was used in “hot spots” mainly by soldiers of special forces and proved itself worthy there.

The heart of the 4310 was a four-stroke eight-cylinder diesel engine with a volume of 11 liters and a capacity of 210 horsepower, which allowed to develop a speed of up to 85 kilometers per hour on a good road. True, and at the same time he ate more than 30 liters of fuel per 100 kilometers. At the same time, it was still possible to go to KamAZ long and far - two fuel tanks with a capacity of 125 liters each provided considerable mileage. A special “feature” was the tire pressure adjustment system, thanks to which the driver, if necessary, could adjust his own wheels to the quality of the road or the complete lack thereof. Naturally, the steering wheel was equipped with a hydraulic booster - otherwise, unless Hercules could manage such a colossus.

The KamAZ-4310 cabin was almost the dream of an army driver (at least, at that time): a three-seater, with noise and heat insulation, equipped with a sunroof, and adjustable seats. For Soviet military equipment, whose creators of soldier's comfort never really "bother", the conditions are very good.

The development of technology, especially military, does not stand still. In 1990, the next, more modern modification, KamAZ-4310, took the place of 5350 in the army. Be that as it may, the first model of the military truck created at the Kama Automobile Plant was more than successful not only for its time, but for the next several decades.