Sweden's small submarine fleet is waiting for a major update. In the coming years, it is planned to build and commission two diesel-electric submarines of the promising A26 project. With their help, the oldest ships of the Södermanland Ave., which have already worked out most of the resource, will be replaced. It is curious that work on the A26 topic started 13 years ago, but the fleet still has not received the desired boats.

Currently, the Swedish Navy has five diesel-electric submarines of two projects. The oldest are the Södermanland and Östergötland boats, designed by Västergötland and commissioned in 1989-1990. In 2003-2004 they underwent modernization under the new Södermanland project and continued their service. In 1996, the Navy received three submarines of the Gotland type.

Already in the middle of the two thousandths, the command came to the conclusion that diesel-electric submarines of the Södermanland type, despite the recent modernization, are becoming obsolete and will require replacement after a few years. In this regard, in 2007 the procurement department of the Ministry of Defense Försvarets Materielverk (FMV) signed a contract with Kockums AB to study the look of the future submarine.

The new project received the working designation A26. In 2010, a design agreement appeared; Then the command revealed its plans. The Ministry of Defense wanted to get two boats with a bookmark after 2012 and delivery in 2018-19. - to replace obsolete Södermanland ships. After 2020, we planned to consider the issue of additional order A26 to replace the Gotlands. The Navy of Norway showed interest in the new project; they could order at least two submarines. 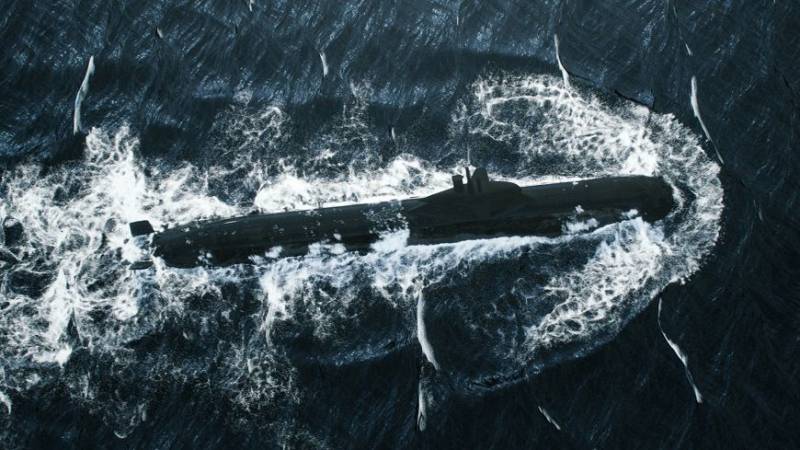 However, problems soon began. The plans for laying the lead ship in 2012 were not fulfilled, and in the fall of 2013 they announced the presence of certain problems, due to which construction was delayed. The first A26 was postponed until at least 2020.

In early 2014, the future of the A26 project was in doubt. Norway became interested in the new diesel-electric submarines, and the Swedish Ministry of Defense invited her to take on part of the costs of developing the project. However, such a proposal did not suit the contractor. The German company Thyssen Krupp, which owned Kockums since 2005, refused to share the payment for the work and wished to receive the full design cost from each customer.

Such an unfavorable proposal sharply reduced the export prospects of the A26 project. Due to this, the Thyssen Krupp Group planned to maintain its current market position and ensure the sale of its other diesel-electric missiles.

The Swedish FMV did not agree with the terms of the German side, and after the disputes, on April 2, the existing contract was broken. A few days later, armed guards arrived at Kockums. They were to seize state-owned equipment and documentation. According to instructions from Germany, the company tried to place it in export, which led to a scandal.

By this time, government agencies began negotiations with Saab AB, which could continue the design, and then arrange the construction of submarines. Already in April, Saab was able to lure 200 Kockums employees. Against this background, the German concern was offered to sell a Swedish shipyard. The negotiations did not take long, and on July 22, Kockums became the property of Saab AB. The former owner received 340 million SEK for her (approx. 32 million euros).

The second life of the project

In March 2015, the resumption of the A26 project was announced. The Ministry of Defense and Saab Kockums reached a preliminary agreement on the implementation of design work and the construction of two submarines. The total cost of the two ships was determined at 8,2 billion kroons (approx. 780 million euros). At that time, it was assumed that the submarines would enter service no later than 2020-22.

The real contract was signed on June 30 of that year. The design and construction costs of two diesel-electric submarines of type A26 were brought up to 7,6 billion kroons (720 million euros). The lead ship should be delivered in 2022, the next - in 2024. At the same time, they concluded an agreement on the average repair of submarines of the Gotland type for 1 billion kroons. The development, construction and repair of various types of boats should be carried out at Saab Kockums in Malmö.

Soon became known as the main points of the technical task defined by the customer, and the features of the developed project. Then various materials on A26 began to be presented at military-technical exhibitions. Kockums decided not to confine itself to the Swedish contract alone and began to search for other customers.

Project A26 in its finished form provides for the construction of a submarine with a displacement of 1700 tons (surface) or 1900 tons (underwater). The length reaches 63 m with a width of 6,4 m. The maximum automation of work is provided, due to which the crew will be reduced to 20-26 people with an autonomy of 45 days. First time in stories Swedish submarine shipbuilding will be provided with the opportunity to work in the ocean zone.

The use of a combined main power plant including a diesel engine, a Stirling engine, and electrical components is proposed. In addition, the Stirling engine is characterized by almost silent operation. A GEM of similar architecture is already being used on submarines of the Gotland type. The boats will receive three diesel-electric installations of 500 kW each and an air-independent system with three 65-kilowatt engines. According to calculations, the maximum speed of diesel-electric submarines will reach 26 knots. At VNEU, the speed is reduced to 5-7 knots. This provides the possibility of continuous stay under water for 15-20 days.

In the bow compartment of the submarine are four torpedo tubes of 533 mm caliber with ammunition in the form of torpedoes or mines. It also provides for the use of a universal weapons compartment with a length of 6 m. Any system can be placed in an accessible volume, at the request of the customer. In particular, a model with three launchers, each of which holds six Tomahawk missiles, was featured at the exhibitions.

The lead ship of a promising project for the Swedish Navy was laid in September 2015. Subsequently, the construction of the second diesel-electric submarine began. In early 2019, the submarines were named HMS Blekinge and HMS Skåne. In accordance with this, foreign sources now often use the new designation of the project - Blekinge-class. 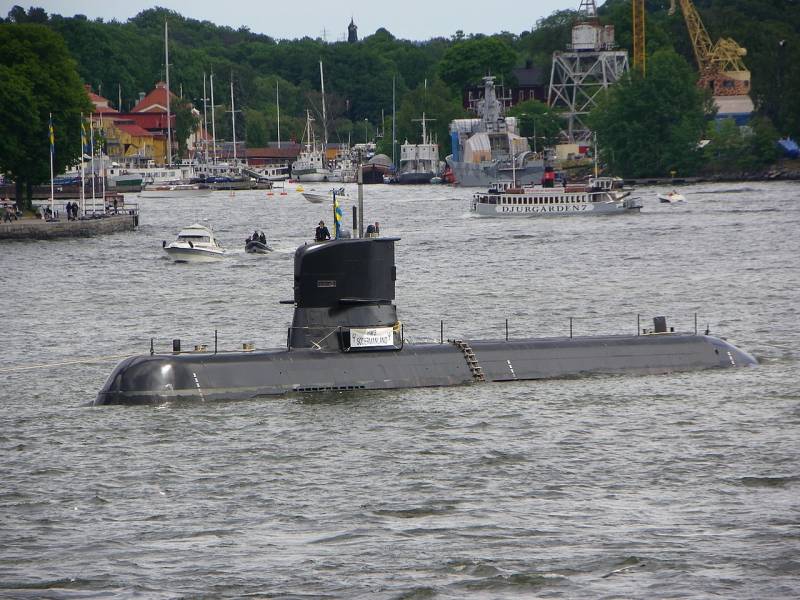 DEPL Södermanland project of the same name. She will be replaced by promising Blekinge
According to current plans, HMS Blekinge will join fleet in 2024, a year later, HMS Skåne will join her. Their appearance will make it possible to launch procedures for the withdrawal from military personnel and the decommissioning of obsolete diesel-electric submarines Södermanland. Also by this time the future fate of the Gotlands will be decided. They can also be replaced by modern A26. If such a decision is made, then by the beginning of the thirties, the submarine forces of the Swedish Navy will switch to a single type of ship, which will give certain advantages.

In the past, the Norwegian fleet was considered the second customer of the A26 DEPL. However, after the events of 2014, he left the program and is no longer going to join it. Later, an agreement appeared with Germany, according to which in the future Norway will receive boats of the modified project "212".

From 2015-17 Saab Kockums is in talks with Poland. For her, they are ready to develop a specialized modification with those or other capabilities. However, the matter does not go further than good marks at exhibitions. Whether a real order will appear is a big question.

Waiting for a breakthrough

In the past, Swedish shipbuilders developed the Gotland submarine project with an advanced non-volatile power plant, which has become one of the major breakthroughs of the last decades in underwater shipbuilding. Currently under construction are two new submarines with a similar GEM and various improvements in various fields. Perhaps the A26 project will again provide a significant separation from foreign competitors.

It should be noted that the current A26 / Blekinge project differs from its predecessors not only in the use of the most modern technologies and in the ability to increase the basic characteristics. The project broke all the negative records in terms of implementation. From the beginning of the first works to the commissioning of the last boat, 18 years will pass - in the absence of new problems. However, all organizational and technical difficulties were successfully resolved, and Saab Kockums began the construction of the ordered submarines. This means that by the middle of the decade, the Swedish Navy will still receive the desired equipment, and the construction company can count on receiving new orders.

Ctrl Enter
Noticed oshЫbku Highlight text and press. Ctrl + Enter
We are
Prospects for the domestic non-nuclear submarine fleet. What will happen to the 677 Lada project?Russian Navy. Sad look into the future. Part of 4. "Halibut" and "Lada"
Military Reviewin Yandex News
Military Reviewin Google News
22 comments
Information
Dear reader, to leave comments on the publication, you must sign in.