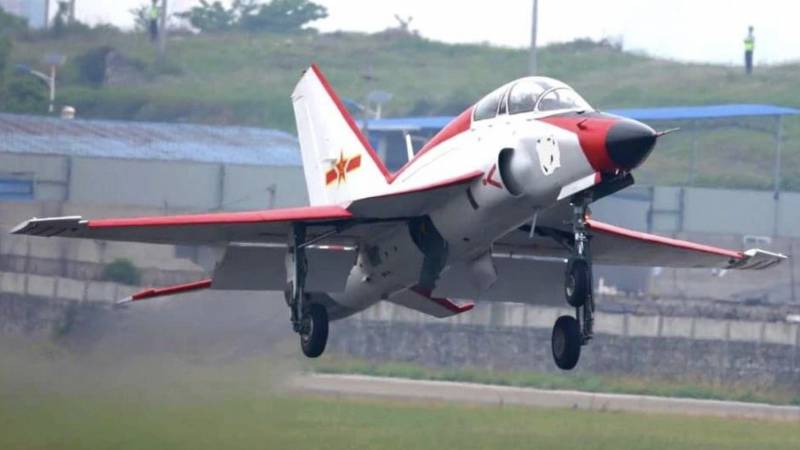 In the foreseeable future, the naval forces of the People's Liberation Army of China may receive a new combat training aircraft designed to train deck pilots aviation. The machine was created on the basis of the existing Guizhou JL-9G Shanying UBS and differs from it in the ability to work on aircraft carriers.

The plans of the Guizhou Aviation Industry Company (GAIC) to develop a deck-based version of the JL-9G Shanyin UBS (Mountain Eagle) became known back in 2010-11. At that time, GAIC was preparing for mass production of the basic modification of the aircraft, but already made plans for the future. Subsequently, various reports on the progress of work appeared repeatedly in the Chinese and foreign press.

In mid-March, the GAIC press office announced the completion of work on a project of particular importance for the benefit of carrier-based aviation. The message was illustrated by computer graphics - an aircraft similar to the JL-9G flew over a Chinese aircraft carrier. It was a very transparent hint of an already famous project.

On April 20, GAIC reported on the completion of the construction of the first prototype aircraft of the new model. The work was completed on time, and now it was planned to move on to the testing phase - ground and then flight.

Ground checks did not take much time, and on May 12, the decked version of the Mountain Eagle made its first flight. Tests are conducted at Anshun Huangoshu Airport (Guizhou Province) and should take some time. How soon flight tests will transfer from a land airport to the deck of an aircraft carrier is not reported.

The tested deck version of the Shanin is another representative of a whole family of Chinese-designed combat trainers. Work on the first aircraft of the line, the future JL-9, started back in the mid-nineties. In 2001, the public was told about him, and at the end of 2003 the first flight took place. 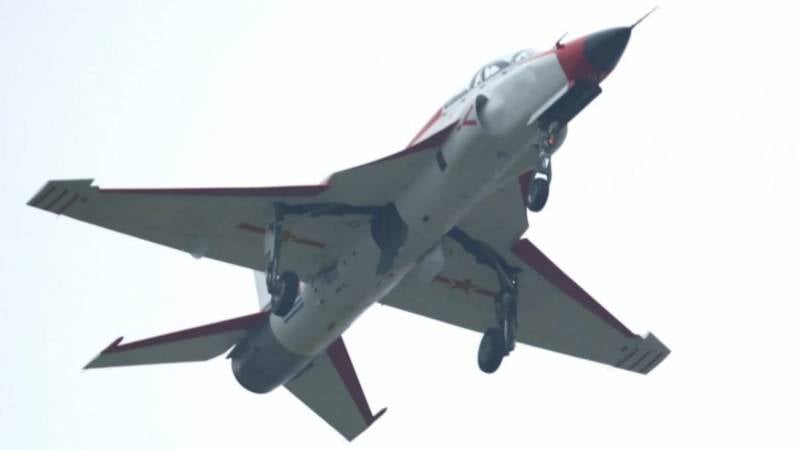 Airplane in the air
At the turn of the decade, it became known about the development of a new modification of the “Mountain Eagle” under the designation JL-9G. It differed from the basic UBS by a modified and reinforced glider, a larger mass and a different power plant. Due to the latter, it was allegedly improved flight performance. In the past there was an assumption that the aircraft version "G" was intended for use in carrier-based aviation. However, later it became clear that this is a "land" UBS, and for fleet will create another car on its base.

The aircraft of the JL-9 Shanying line are intended for the supply of PLA. For export, UBS under the designation FTC-2000 Mountain Eagle is offered. This technique is minimally different from the basic one and, probably, it can be modified taking into account the wishes of the customer. To date, both the main FTC-2000 and the improved FTC-2000G are available to order.

Serial production of JL-9 aircraft was launched in 2011, and almost simultaneously with it they launched the assembly of more expensive and complex UBS Hongdu JL-10. It was assumed that the two types of equipment would complement each other and provide more effective training for pilots. Soon GAIC, having received an order from the PLA, mastered the production of newer JL-9G.

Export FTC-2000s are also mass-produced. Foreign orders are available and executed. Launch of the more advanced FTC-2000G. The first production car of this type took off in September 2018, and new ones followed.

The main features and capabilities of promising UBS for the fleet are known. In general, it is based on the design of the serial JL-9G ground-based, but has characteristic differences associated with the features of the proposed operation. In addition, a certain difference in the age of the two aircraft affected the composition of the equipment and, accordingly, the capabilities.

As previously reported, the JL-9G, which became the basis for the deck, differs from the simple JL-9 advanced glider. Some units are reinforced, a new wing has been developed. Used new supersonic air intakes that cut off the boundary layer of the fuselage. The wing was also seriously rebuilt. 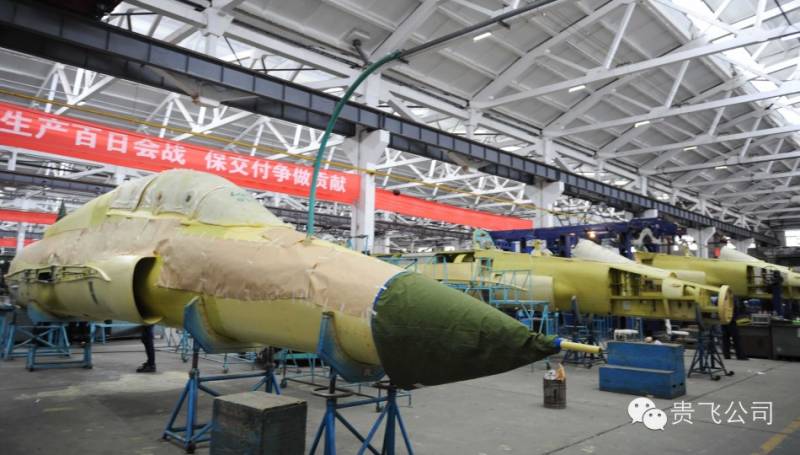 JL-9G production aircraft in the assembly shop, 2015
In the context of creating a deck-mounted UBS, the need for additional reinforcement of some airframe and landing gear units, installation of a brake hook, etc. was mentioned. The necessity of using a folding wing was not ruled out. Aircraft with such technical features can be stored and operated on existing and promising PLA aircraft carriers. He will be able to take off from the nasal springboard and land on the aerofinisher.

The maximum take-off weight of the JL-9G and its specialized version reaches 11 tons. The aircraft is capable of developing supersonic speed; cruising - 870 km / h. Provided maneuverability at the level of serial fighters of the Air Force and Navy PLA.

Onboard equipment of the deck version of the Mountain Eagle provides the opportunity to train pilots and solve combat missions. The aircraft has a radar station integrated into the aiming and navigation complex, modern communications and navigation, etc. For pilots designed double tandem "glass" cabin with duplication of instruments and controls.

Projects of the JL-9 family include equipping aircraft with an integrated 23 mm automatic gun. Under the wing and fuselage there are five suspension points for weapons. UBS carries at least 2 tons of weapons in the form of guided and unguided missiles and bombs. All this allows you to perform a wide range of training and combat missions in the air-to-air and air-to-ground modes.

Currently, for training fighter pilots in the PLA, several types of training and combat training aircraft are used. The oldest and most massive is Hongdu JL-8, manufactured since the mid-nineties. At the beginning of the tenths it was supplemented with modern Guizhou JL-9 and Hongdu JL-10; Modifications to this technique have also been created.

In the recent past, in the PLA naval aviation, two training regiments were formed on JL-9 aircraft of two main modifications. The total number of their equipment is approx. 40 units In the near future, it is possible to replenish the fleet with newer JL-9Gs. 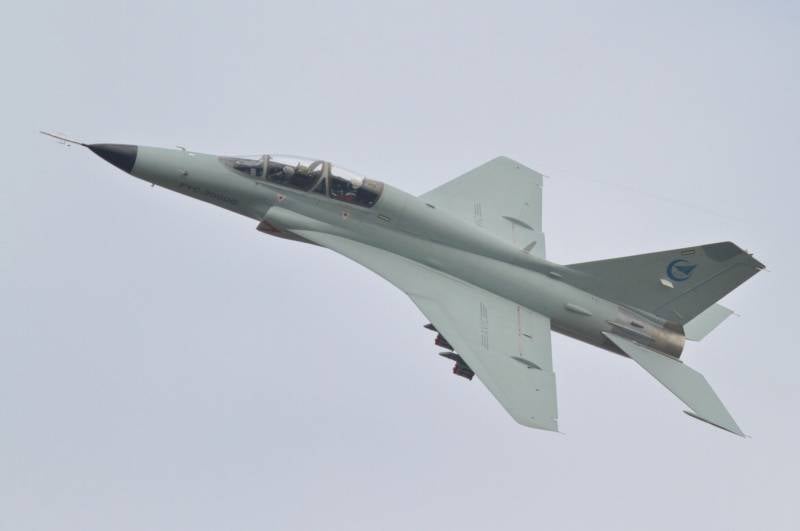 Export FTC-2000G
With all this, in the training system of "marine" pilots, there is still no specialized deck-based UBS. After training on "land" aircraft, pilots immediately switch to deck Shenyang J-15. The emergence of a new UBS project indicates that the command decided to change the training system and introduce a new stage in it - between training on UBS / UTS of exclusively land based and the transition to military equipment of carrier-based aircraft.

How justified this step is is not entirely clear. Other countries with developed carrier-based aircraft do without specialized airborne systems capable of landing on an aircraft carrier. This imposes some limitations, which, however, are not considered critical. Only the PLA is planning to abandon such a system.

The timing of the completion of the test program, as well as the start of mass production and the introduction of the deck JL-9G in the army, remains unknown. Testing a new type of aircraft, both at aerodromes and on the deck, can take several years - although the use of the proven design of a production aircraft provides some opportunities to accelerate these processes. It can be assumed that the mass operation of deck-based UBS in training units will begin by 2025.

In all likelihood, the decked version of the Mountain Eagle UBS will remain a model only for its own fleet. Emergence of export orders should not be expected. The new aircraft is being developed for use on aircraft carriers, and only a few countries have such ships. Most of these states will not buy Chinese equipment for political reasons. She will not be interested in others because of different views on the training of flight personnel.

China plans to further develop its carrier fleet, and with it carrier-based aviation. Mass and high-quality training of pilots who will have to work on ships in the future is needed. Various measures are being taken, and one of them is the creation of a specialized deck-based UBS. He has already reached the stage of flight tests, which in the future will be able to open the way for him in naval aviation.

Ctrl Enter
Noticed a mistake Highlight text and press. Ctrl + Enter
We are
An-12 in AfghanistanChinese training fighter "Mountain Eagle"
16 comments
Information
Dear reader, to leave comments on the publication, you must to register.