Auxiliary vessels: ships the fleet cannot do without 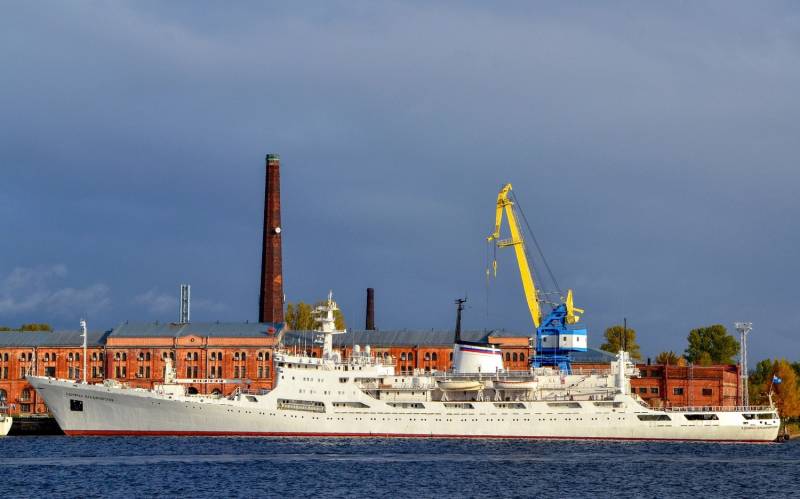 Naval activities fleet not carried out by itself. In order for warships to be able to carry out combat duty successfully, many auxiliary vessels and boats operate: hydrographic, oceanographic, rescue, reconnaissance, tanker, and towing. These ships are rarely in the spotlight, but without them the Navy cannot exist.

This series of articles is dedicated to auxiliary and special vessels operating in the interests of our navy and commercial fleets. Open the cycle of ships designed for hydrographic surveys.

The hydrographic service of Russia exists under different names and in different organizational and structural forms since the time of Peter I. At present, its official name is the Department of Navigation and Oceanography of the Ministry of Defense of the Russian Federation.

The main functions of the Office are as follows:

1. Guidelines for maintaining the forces and means of navigational-hydrographic, hydrometeorological and topographic and geodetic support (hereinafter referred to as NGOs, GMOs and TGOs) in the established combat readiness for the fulfillment of the tasks of NGOs, GMOs and TGOs of combat and daily activities of forces (troops) of the fleets, the Caspian flotilla, and others types of the Armed Forces of the Russian Federation in designated operational areas (areas of responsibility).

2. Organization of oceanographic, hydrographic and marine geophysical work in the oceans and seas in the interests of the defense of the country and NGOs of maritime activities of the Russian Federation.

3. Management of the work on the creation of navigational marine, geophysical and other special maps (including electronic), manuals and manuals for navigation in the World Ocean and their provision to consumers of the Russian Federation and foreign countries in the established manner.

4. Management of support (supply) of forces (troops) of the Navy with marine navigation and oceanography (hereinafter referred to as SIT), maintenance of technical readiness of SIT on ships of constant readiness.

5. Maintenance and development of a system of navigation equipment on the coast and in sea waters under the jurisdiction of the Russian Federation (with the exception of the Northern Sea Route) in the interests of the defense of the country and NGOs of maritime activities of the Russian Federation, ensuring the operation of means of navigation equipment with established characteristics and operating modes.

What are the means to implement the above tasks? Consider the ships available at the hydrographic service. 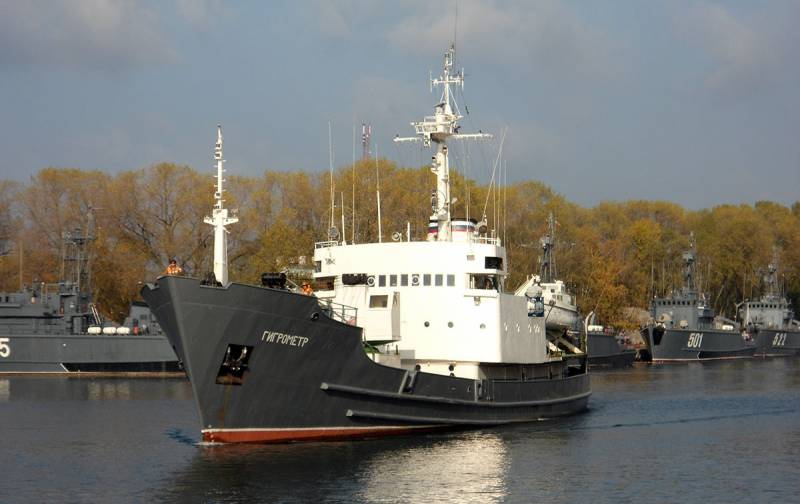 Project 861 hydrographic ship
Hydrographic vessels of the 861 project Designed for hydrological research, raid equipment, the study of areas hazardous to shipping, research of currents, depth studies, meteorological and bathythermographic observations, works on chemical hydrology in the near and far sea zones.

GAS Bronze and the ARP-861R radio direction finder were installed as special equipment on the ships of project 50.

Oceanographic research vessels of the project 852 type "Academician Krylov". Built in the 1970s in Polish Szczecin.

The vessels of this project are intended for research in the field of oceanology, chemical hydrology and marine meteorology. Also for biological, aerological, actinometric observations; registration of waves and currents in the waters of the oceans, and other marine observations and studies. 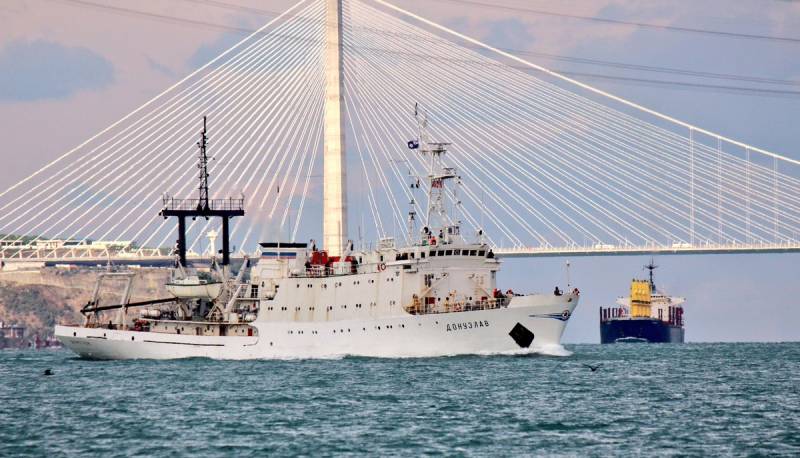 Project 862 hydrographic ship
Hydrographic vessels of the 862 project. Built in the 1970s and 80s in Polish Gdansk. These vessels are designed to study oceanography issues of specific military importance, such as the study of hydrological conditions to ensure the free flow of submarines of new projects in remote areas of the oceans and for complex oceanographic research. In particular, ships of project 862 can:
1) do routing measurement;
2) conduct bathythermographic studies (continuous measurement of the vertical distribution of water temperature);
3) observe the sea currents;
4) do research in chemical hydrology;
5) explore marine meteorology;
6) conduct a measurement of the depths;
7) to make a detailed survey of the bottom topography;
8) do a topographic survey;
9) carry out geodetic works;
10) to research radio navigation systems.

These vessels have unlimited seaworthiness and worked in all areas of the oceans.

Project 862 ships have a total displacement of 2435 tons, a maximum speed of 15,9 knots, a range of 8650 nautical miles, and a crew of up to 70 people. The power plant consists of two diesel engines with a capacity of 2200 liters. with. As auxiliary engines, 2 electric motors with a capacity of 143 liters were installed. S., giving a silent small stroke.

To carry out work on board there are two hydrographic survey boats, as well as a bathometer and other equipment.

Of the special equipment, OGAS MG-329 Sheksna and equipment for RTR and RR should be noted. 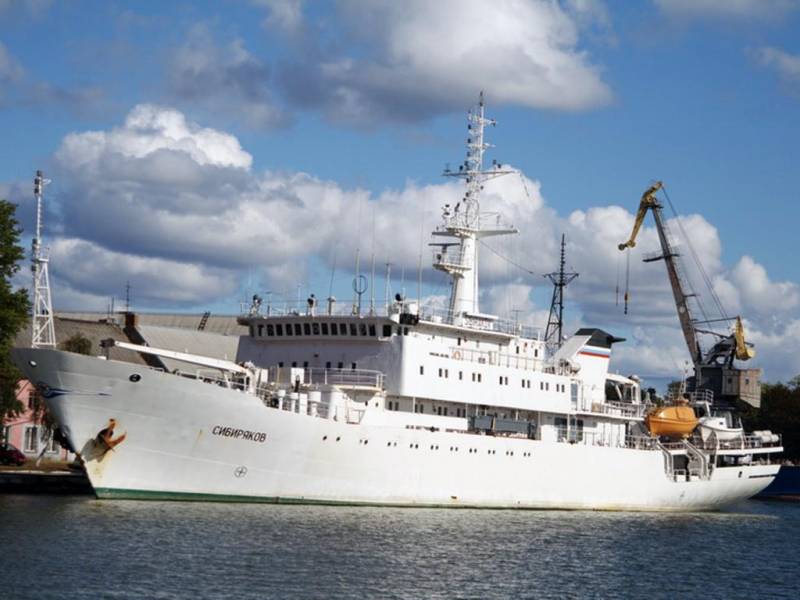 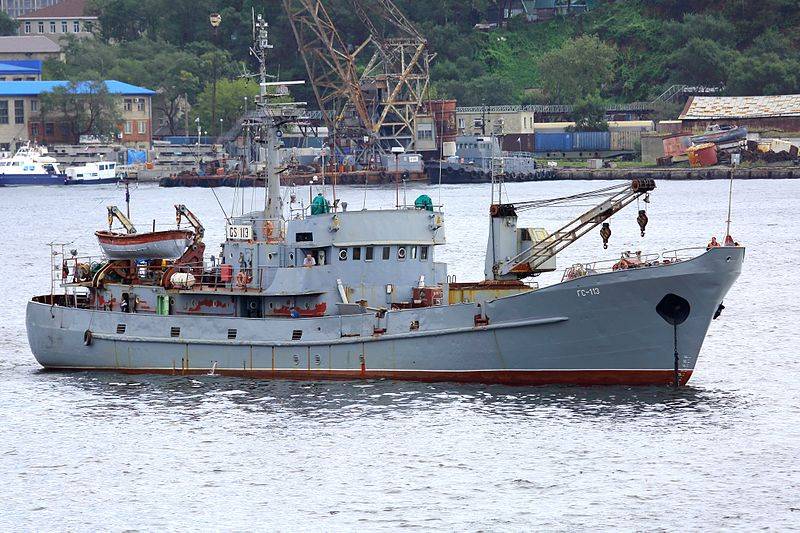 Project 870 hydrographic ship
Hydrographic vessels of the 870 project the construction of the Gdansk shipyard. The vessels are intended for hydrological research in the near sea and base zones, study and work in areas hazardous to shipping, equipment raids. They have a total displacement of 680 tons, a full speed of 14 knots, a maximum range of 4000 miles at 11 knots. The crew is 26 people. Power plant - 2 diesel engines with a total capacity of 1740 liters. with. 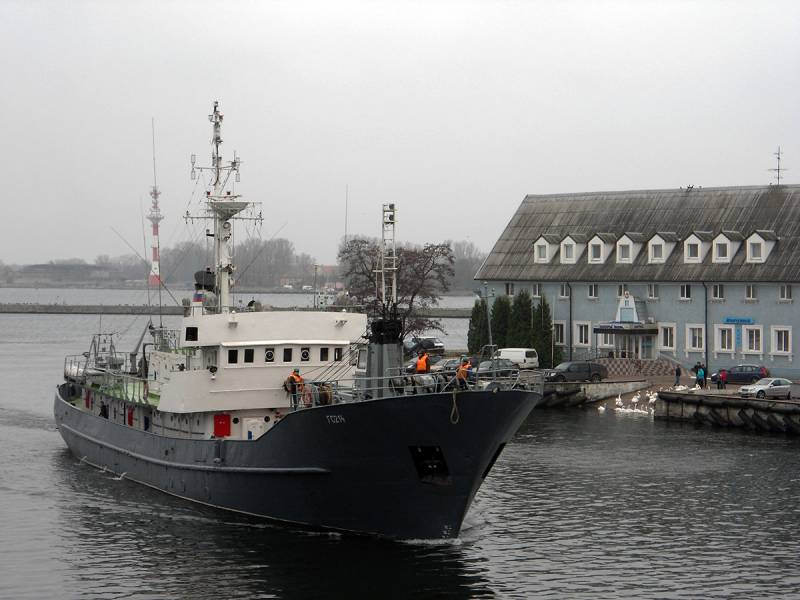 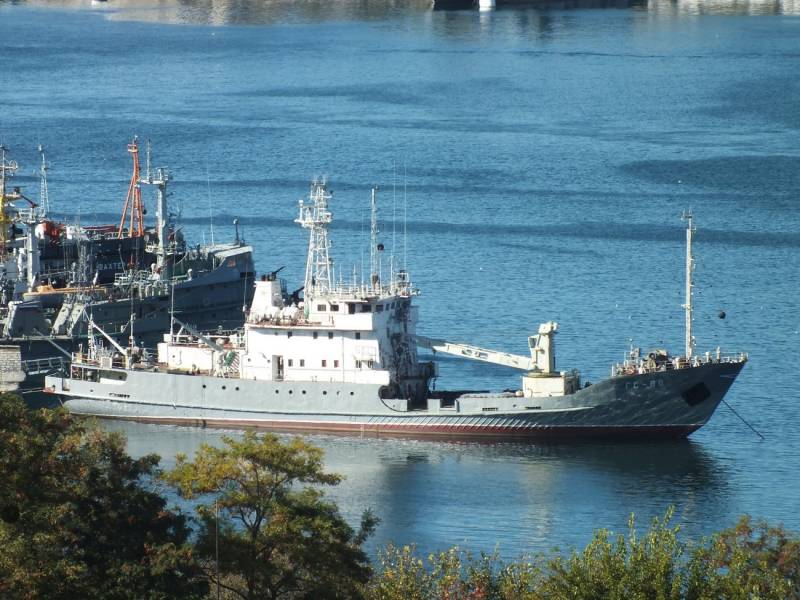 Project 872 hydrographic ship
Hydrographic vessels of the 872 project were built in Gdansk in the 1970-1980s. Designed for hydrographic support of the fleet in the near sea zone. The vessels have a total displacement of 1190 tons, full speed - 13,37 knots, a maximum cruising range of 4356 miles at 11,82 knots, a crew of 36 people. The power plant consists of 2 diesel engines with a capacity of 960 liters. with., also there are 2 auxiliary electric motors with a power of 143 l. with. 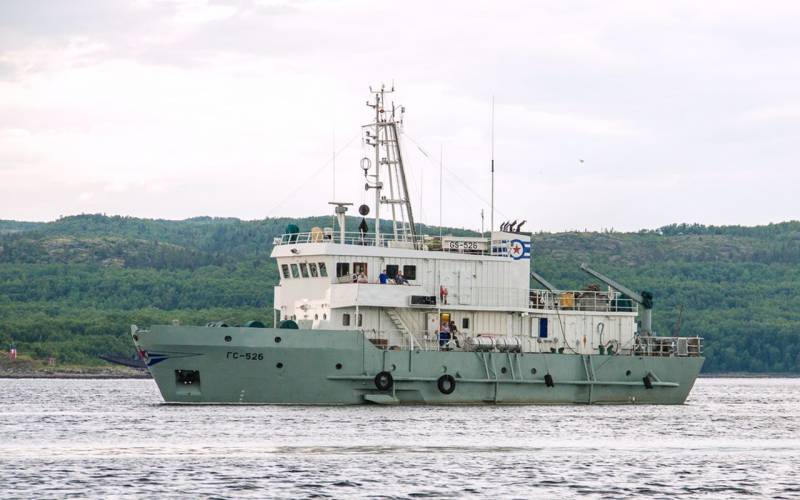 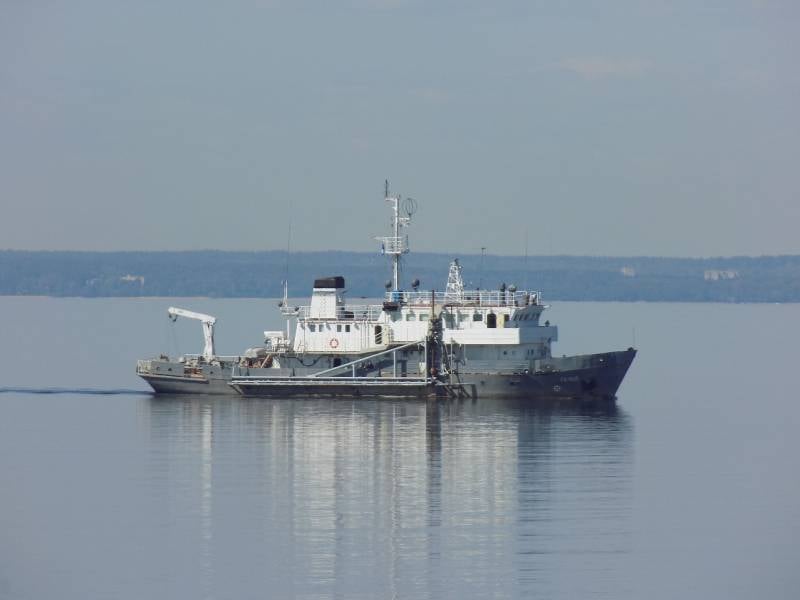 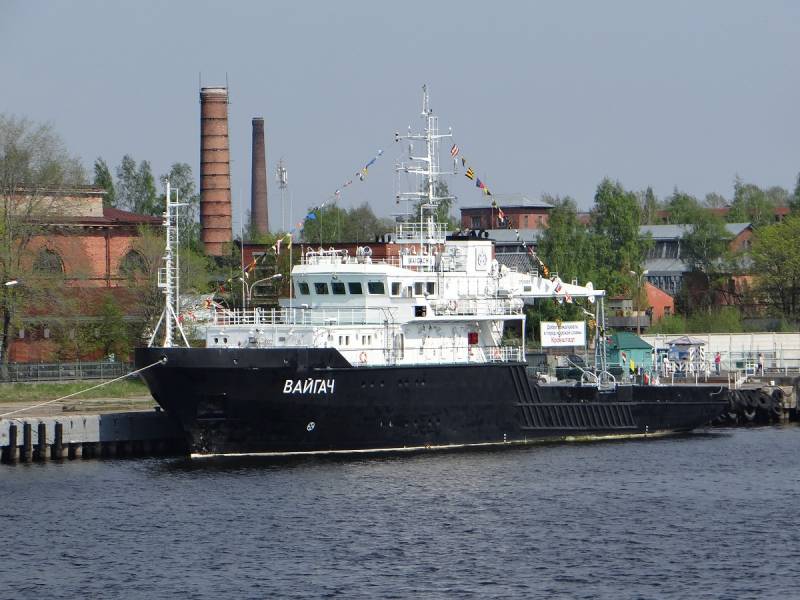 Project 19910 small hydrographic ship
Small hydrographic vessels of project 19910 domestic construction. Construction has been underway from the 2000s to the present. The tasks of the vessel include:
1) setting and removal of navigational sea buoys and milestones of all types;
2) maintenance (inspection, reloading and repair) of coastal and floating aids to navigation equipment (SSS), control over their uninterrupted operation;
3) hydrographic work to the extent of the installed equipment;
4) transportation of various cargoes to support the work of coastal navigation aids and hydrographic units on an unequipped coast.

Vessels have a total displacement of 1200 tons, full speed - 12,5 knots, cruising range up to 3500 miles, crew - 17 people. The power plant consists of two diesel generators with a capacity of 1200 kW each with power transfer to two full-turn helical columns with fixed pitch screws in nozzles (ADG-550-4 electric motors with a power of 750 kW each) and one bow thruster.

Hydrographic equipment is represented by a multi-beam echo sounder, which allows to obtain an image of the bottom topography in 3D format in real time.

Special equipment is represented by: an 8-ton two-hitch electro-hydraulic crane, a 0,16-ton hydrological winch with a crane, a hand hoist of 0,99 tons, two folding platforms with a hydraulic drive, two storage areas with rotating roller tables. 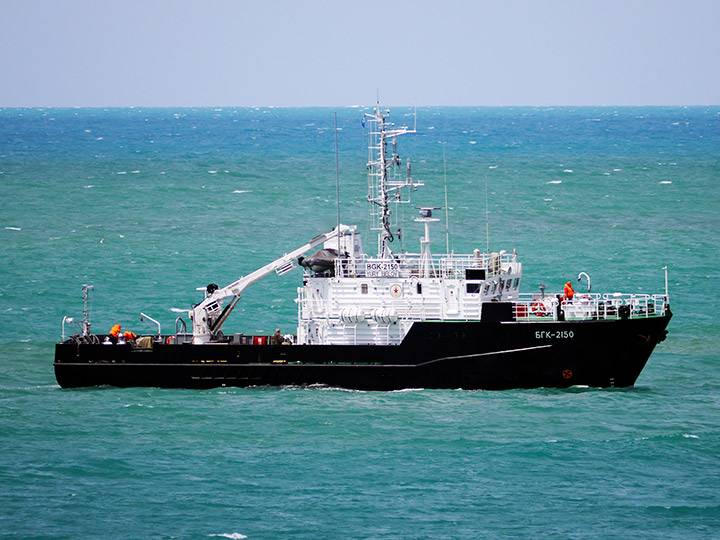 19920 Large Hydrographic Boat
Large hydrographic boat project 19920 "Cormorant" Russian-built (built from the 2000s to the present) are used to ensure the combat and daily activities of ships, units of coastal forces, naval bases and ranges.

Project 19920 boats are designed for hydrographic and pilotage works in coastal areas, including for:
1) reconnaissance of the water route;
2) hydrographic measurements;
3) bottom topography;
4) pilotage postings;
5) the setting, removal and maintenance of floating equipment of navigation equipment;
6) submarine leaders at basing points.

Boats can also deliver scientific groups and special equipment up to 15 tons to the unequipped coast.

Boats have a total displacement of 320 tons, cruising speed - up to 11,5 knots, cruising range up to 1000 miles, crew - 11 people. The power plant of the boat consists of two diesel-gear units based on Deutz BF6M 1015MS diesel engines with a capacity of 337 liters each. with. 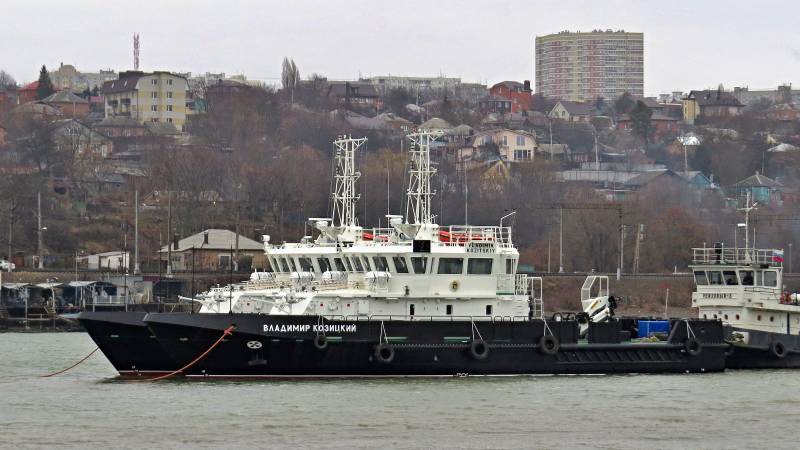 Large hydrographic boat project 23040G
Large hydrographic boat project 23040G Designed for: high-precision areal survey of the bottom topography and survey of navigational hazards at depths of up to 400 meters and shooting of the bottom topography with a single-beam echo sounder at depths of up to 2000 meters; maintenance of all types of floating warning signs (hereinafter referred to as PPZ); setting / shooting of all types of PPZ up to 1,7 tons and a length of up to 6,5 meters; delivery of personnel, food, spare parts and repair crews to coastal aids to navigation equipment; navigation and hydrographic support for rescue and search operations; pilotage and leading of submarines and large-tonnage ships at basing points and on approaches to them. 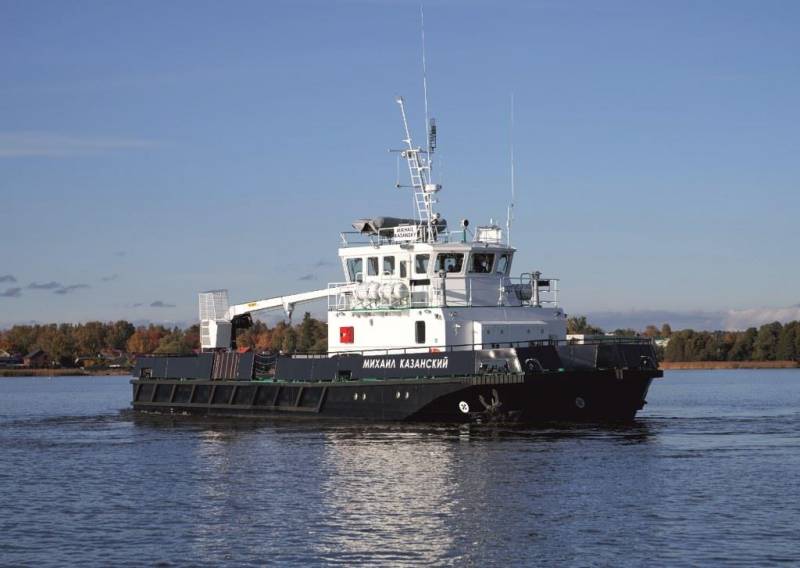 Large hydrographic boat project 23370G
Project 23370G boat Designed for pilotage and certain types of hydrographic work, including:
1) setting (shooting) and maintenance of floating warning signs (PPZ);
2) the delivery of maintenance personnel, repair crews, food, fuel and other cargo to coastal facilities of navigation equipment (SSS), including those located on an unequipped coast;
3) operational measurement of the depths in the places of setting the PPZ using a measuring echo sounder.

Thus, at present, only the composition of small hydrographic vessels and CGTs is being updated, and in an amount significantly less than the number of decommissioned vessels. At the same time, projects 852, 862 and 865 are not completely replaced by vessels. And these are vessels capable of long-distance cruises and operate practically anywhere in the World Ocean. That is, in the coming years, the Russian Navy will be able to rely on hydrographic support only in its territorial waters. Moreover, taking into account the gigantic length of the coastline of Russia, the various climatic and hydrological conditions of the coastal waters, it is safe to say that the ships put into operation are definitely not enough for reliable hydrographic support of the Navy even in our territorial waters.

There is, however, some hope that hydrographic support in the far sea zone can be taken over by oceanographic vessels being built in the interests of another (very secret) agency. But more about that in the next article.

Ctrl Enter
Noticed a mistake Highlight text and press. Ctrl + Enter
We are
Construction of auxiliary vessels for the Russian Navy"Svetlana". History of creation
19 comments
Ad