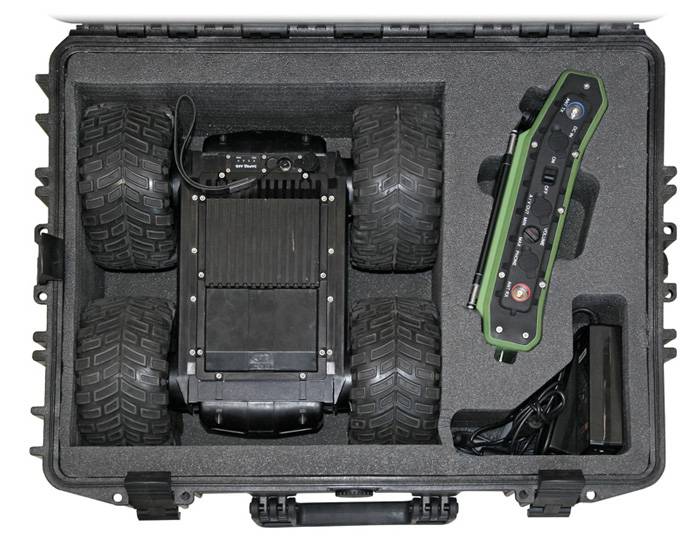 Robot "Scarab" and the operator console in a case for transportation. Photo "SET-1" / set-1.ru

In recent years, in the interests of the Russian engineering troops, promising robotic systems have been developed for use in the search and disposal of explosive devices. Several engineering RTKs have already been adopted and are actively used in real operations. In addition, development work is ongoing, and completely new designs may soon appear.

To search for and neutralize explosive devices, sappers may need light and compact RTKs that can literally crawl into any slot. Industry has already developed such equipment, and the International Mine Action Center of the Armed Forces of Russia has managed to test it in real conditions.

One of the first and most useful RTKs of this kind was the Scarab from SET-1. The basis of the complex is a compact and lightweight (355x348x155 mm, less than 5,5 kg) four-wheel remote-controlled platform with two-way radio communication with the operator. The Scarab carries a video camera and allows reconnaissance within a radius of 250 m from the operator. In the basic configuration, such an RTK provides for the collection of information in a variety of conditions. 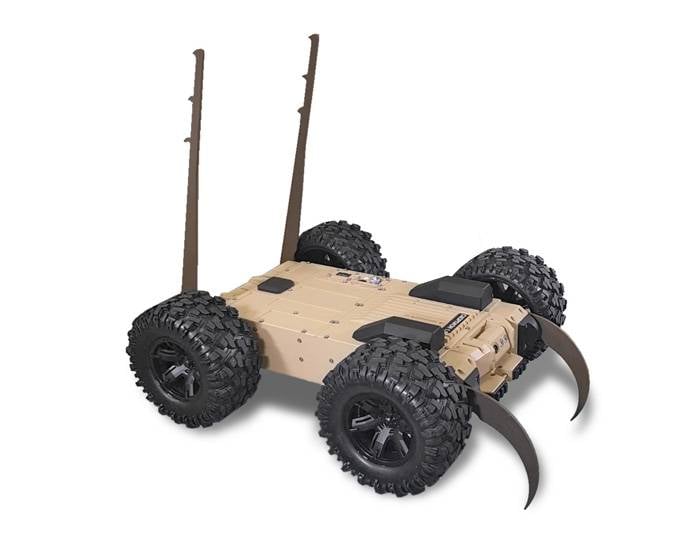 "Scorpio" with extended bars. Photo "SET-1" / set-1.ru
Last year, SET-1 presented for testing the new RTK Scorpion, made on the basis of the Scarab. It is distinguished by the presence of movable rods and hooks, as well as improved driving characteristics. The main task of Scorpio is to remove the so-called stretch marks. The robot can detect the stretched wire, and then accelerate and break it with the help of the raised rods. High speed of movement protects it from fragments and a blast wave. RTK can also be used to transport engineering charges, etc.

The light Scarab has already passed tests in Syria and received high marks, although there was a lack of any ability to interact with the detected objects. The newer "Scorpio" is tested in the conditions of the landfill. Until the end of 2020, it can be adopted by the engineering forces.

Cobra with a manipulator

In a number of situations, sappers need a remotely controlled robot with a full-fledged manipulator suitable for interacting with objects. In our country, several similar systems of various kinds have been developed. In particular, since 2018, the Kobra-1600 RTK developed by the Scientific Research Institute of Special Engineering of the Moscow State Technical University named after Bauman. 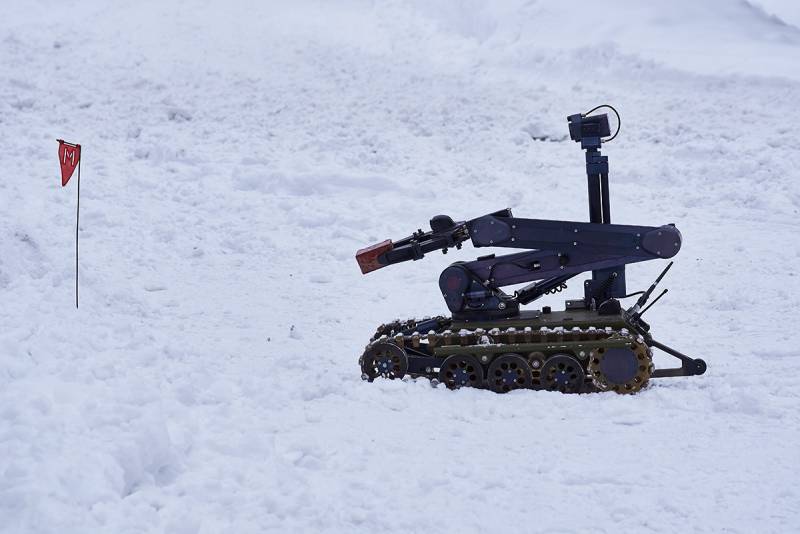 "Cobra-1600" at the test site. Photo by the Ministry of Defense of the Russian Federation / mil.ru
"Cobra-1600" is a self-propelled tracked platform with a manipulator and a set of cameras. In the transport position, the product has dimensions of 850x420x550 mm, weight without additional equipment - 62 kg. The platform can move on different surfaces and overcome small obstacles. Control is via cable or radio.

The design of the manipulator allows work with a reach of at least 900 mm from the platform body. Maximum payload (at shorter flights) 25 kg. The manipulator is equipped with a controlled grip, and can also carry additional equipment.

The robot is able to conduct reconnaissance, search and study suspicious objects. It is possible to move the detected object or impact on it using additional means. Depending on the type of threat, Cobra 1600 can be used to neutralize it directly or to transport it to a safe place.

Together with a number of other modern models for various purposes, the Cobra-1600 is included in the MICR Mobile Engineering Mine Clearance Complex. All facilities of the complex are transported by car and are always ready for use. A few days ago, the Ministry of Defense announced the adoption of the MICR for the supply of engineering troops. Several of these complexes have already been delivered to the troops. 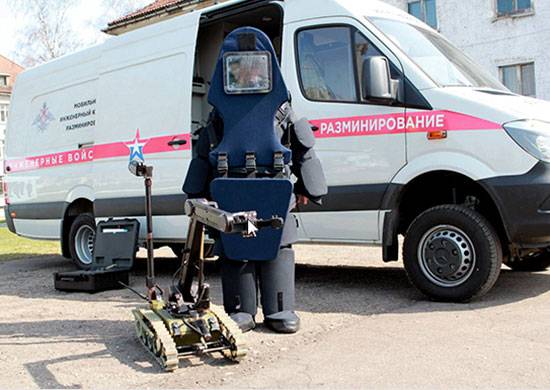 RTK "Cobra-1600" and other MICR components. Photo by the Ministry of Defense of the Russian Federation / mil.ru
Thus, now the "Cobra-1600" is used both as an independent engineering tool, and as part of a more complex multifunctional complex. Moreover, the platform with the manipulator is not the only model of its kind, which expands the capabilities of the sapper units.

From the Uranus Family

In the recent past, the 766th department of production and technological equipment ”(766 UPTK) developed the RTK Uran range. On the basis of unified platforms, the creation of armored vehicles of various classes with different capabilities is proposed. The first in this family was the sapper RTK Uran-6.

"Uranus-6" - a 6-ton tracked armored vehicle with mounts for the installation of various engineering equipment. The tracked RTK has a 240 hp diesel engine. and is able to continuously work up to 5 hours. Control is carried out from the operator panel through two-way radio communication. The operator can be located at a distance of at least 800 m from Uranus-6, which eliminates the risks of its defeat. 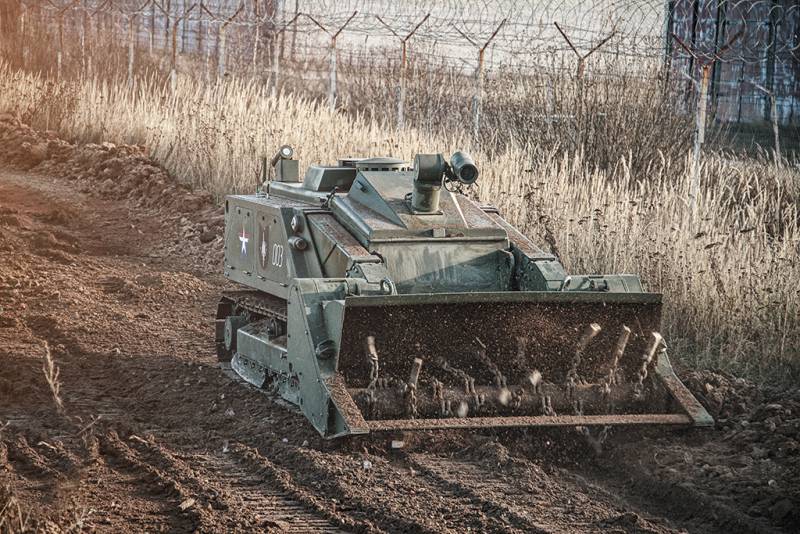 Complex "Uranus-6" with brisk trawl Photo 766 UPTK / 766uptk.ru
The robot can use three types of trawls, as well as a mechanical catch and a dozer type dump. With such devices, the RTK is capable of digging, manipulating large objects or carrying out continuous trawling of a strip 1,7 m wide. Dangerous objects are mechanically destroyed or undermined due to the impact of the trawl.

According to calculations, one Uran-6 robot is capable of replacing 20 human sappers. In this case, the machine assumes all risks and does not endanger the operator. The high characteristics of the RTK were confirmed during acceptance tests that took place in dangerous areas of the Chechen Republic. Subsequently, Uran-6 products were used to mine Syrian territory. Both at the landfills and in real conditions, the RTK mine clearance proved to be the best.

As experience shows, the basis for a robotic complex can even be serial tank chassis. This approach was implemented in the Passage-1 RTK mine clearance project, developed on the basis of the existing BMR-3MA engineering vehicle. The refinement of the existing sample was carried out by the All-Russian Research Institute “Signal”. 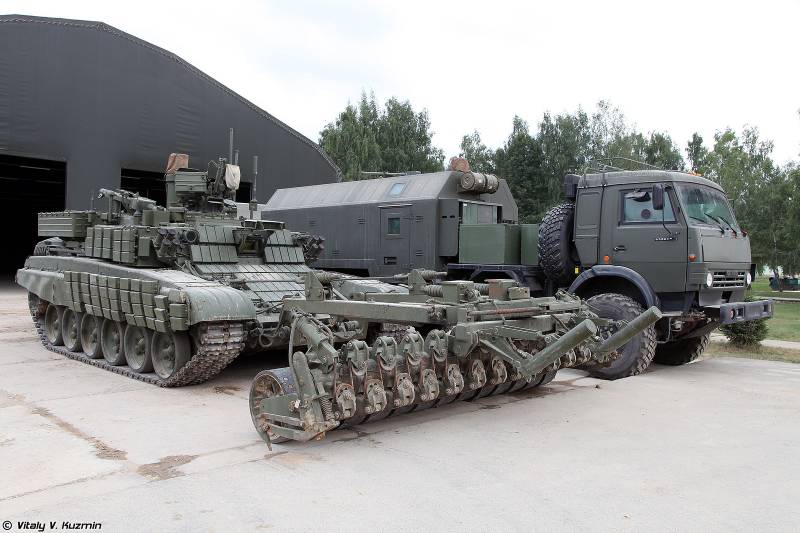 Prototype RTK "Pass-1". In the background is a control car with operators' seats. Photo by Vitalykuzmin.net
The BMR-3MA armored clearance vehicle is built on the chassis of the T-90A main tank and retains its main units. In this case, reinforced mine protection and nodes for installing trawling equipment are used. Compatibility with modern KMT-7 and KMT-8 skating rink mines is ensured. In the basic configuration, the BMR-3MA is controlled by a crew of two people and can carry three sappers.

The “Pass-1” project provides for equipping an engineering machine with additional control tools that ensure autonomous operation or operator commands. Operator jobs are located in a separate machine. After such an upgrade, the BMR-3MA retains all the basic functions and target characteristics. At the same time, the benefits associated with the removal of the crew to a safe distance are achieved.

In 2016, the All-Russian Research Institute of Signal and the Ministry of Defense successfully conducted state tests of Pass-1. The equipment confirmed its capabilities, and its developer announced its readiness to establish serial production of equipment sets for the BMR-3MA. Subsequently, “Pass-1” was shown at exhibitions and on television. In 2017, appeared news on the supply of serial BMR-3MA for engineering parts, but the adoption of the Pass-1 kit has not yet been reported.

Thus, in just a few years, a whole series of serial robotic systems of various classes and for various purposes appeared in the Russian engineering troops. Both compact portable systems and large heavy armored vehicles were put into operation. All of them passed the necessary tests and confirmed their capabilities. A number of samples even managed to participate in real mine clearance operations in our country and abroad. 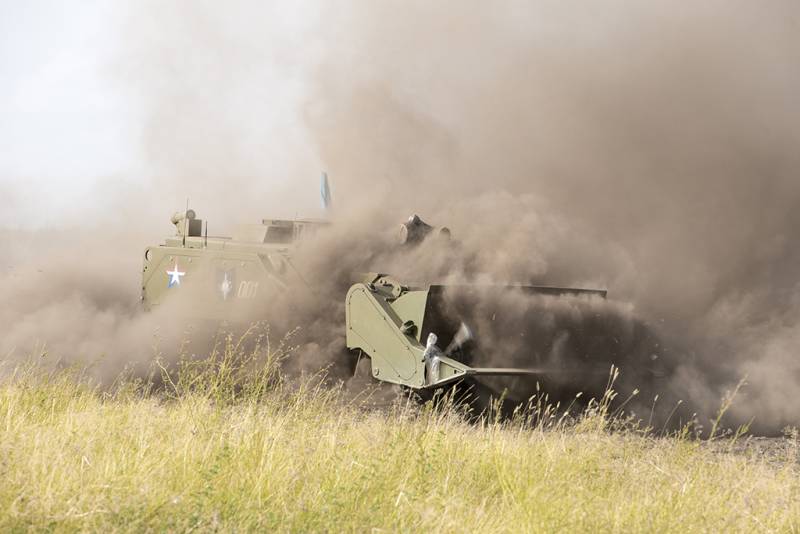 Uranium-6 carries out trawling. Photo 766 UPTK / 766uptk.ru
It is curious that all the modern and promising projects, despite their differences, are based on the same ideas. The equipment from Scorpio to Pass-1 is created for one purpose - to ensure that engineering tasks are performed in hazardous conditions without risks to humans. All robotic mine clearance systems are capable of operating at a considerable distance from the operator. As experience has shown, the idea of ​​maximum human security can be implemented using different platforms and target equipment.

To date, a number of samples of different classes with differing capabilities have been created in the interests of sapper units. This technique has occupied all the proposed niches and shows itself well when performing educational and real tasks. Obviously, the development of sapper RTKs should continue. This will allow to use the accumulated experience and introduce new technologies, due to which more perfect samples will appear.

Ctrl Enter
Noticed a mistake Highlight text and press. Ctrl + Enter
We are
Multi-axle rocket carriersTheory and practice of engineering operations
2 comments
Information
Dear reader, to leave comments on the publication, you must to register.