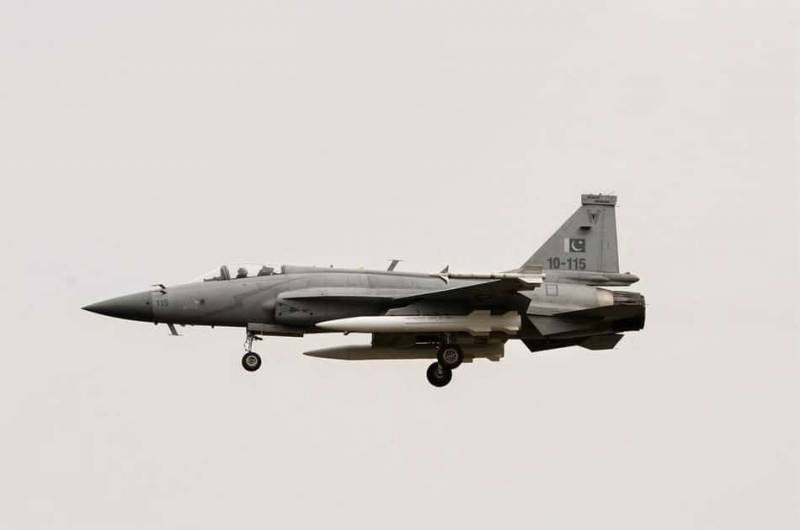 JF-17 fighter-bomber with CM-400AKG missiles under the wing. Photo Quwa.org

China is actively promoting its weapon in the international market and even creates special export designs. A similar approach is actively used in all areas, including in the field of aviation missile weapons. So, since 2012, the promising anti-ship missile CM-400AKG developed by China Aerospace Science and Industry Corporation (CASIC) has been demonstrated at exhibitions.

In 2012, at an air show in Zhuhai, Chinese industry showed a curious kit. Chengdu FC-1 Xiaolong fighter-bomber was presented to potential customers with a variety of weapons to solve a wide range of tasks. This kit includes a new anti-ship missile system under the designation CM-400AKG. Both the aircraft and its weapons were intended for export deliveries.

By that time, the FC-1 rocket had been in service with the Pakistan Air Force for several years under the designation JF-17. Some of the missiles presented were also in operation. In 2012, it was announced that the Pakistani army would soon receive another new anti-ship missile, which had been at the exhibition. However, as subsequent events showed, purchases and deliveries were delayed. Pakistan received new weapons only a few years later.

The new RCC CM-400AKG naturally attracted the attention of specialists. In it, they quickly enough saw a modified and adapted for export version of the well-known anti-ship missile YJ-12, intended only for the Chinese army. Soon it became known that the export rocket has some characteristic features and is noticeably different from other products of previous modifications.

Product CM-400AKG (hereinafter referred to as SY-400 in some sources) is an air-launched anti-ship missile compatible with a number of tactical aircraft aviation. An important feature of the rocket is the "triple" guidance system and a special flight profile. 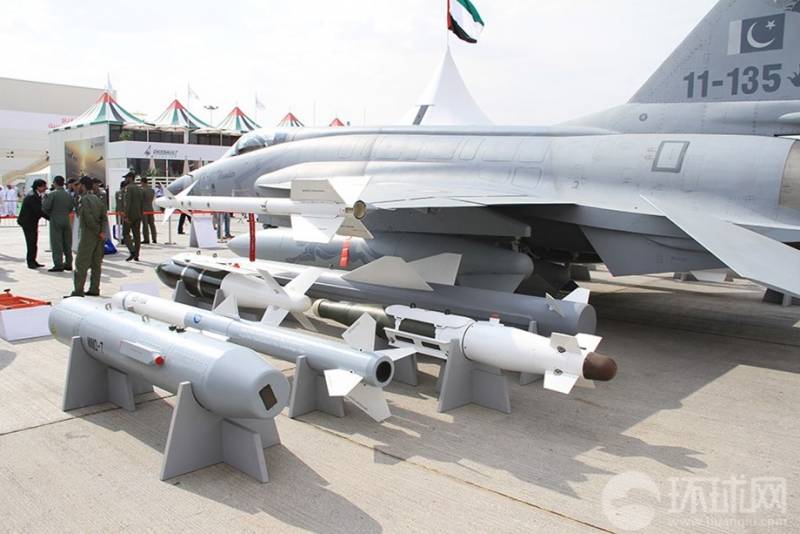 Export kit: aircraft FC-1 / JF-17 and its weapons. The CM-400AKG missile is laid under the wing and stands out for its size. Photo Deagel.com
Externally, the CM-400AKG differs little from the base YJ-12. It has a cylindrical body with an animated head, on which two sets of X-shaped planes are placed. The missile is built according to the traditional layout with the head arrangement of controls, the central warhead and the tail engine compartment.

Of great interest is the approach of CASIC engineers to create homing tools. The CM-400AKG product carries three similar systems of different types at once, complementing each other and solving common problems at different stages of flight. Access to the target area is carried out using a combined inertial / satellite navigation system. It can also be used as a full-fledged GOS, providing a fall on the target with a circular probable deviation of 50 m.

For greater accuracy, anti-ship missiles should use infrared / television and passive radar heads on the descending section of the trajectory. The first provides target search by visual and thermal signatures, and the second receives the radiation of the target’s radio equipment. An optical seeker makes it possible to obtain a CWS of 5 m, a radar one - no more than 10 m. It is assumed that the use of two seekers at one stage can dramatically increase the rocket's resistance to the main types of interference.

Two options for combat equipment are proposed. The first CM-400AKG is equipped with a 150-kg high-explosive warhead. The second option involves a 200-kg penetrating warhead. Such warheads provide for the defeat of surface targets with a displacement of 3-5 thousand tons. Thus, one missile can disable an enemy frigate or destroyer.

RCC under the wing of the carrier. Tests, tentatively 2014-15 Photo Sina.com.cn
The tail compartment of the housing accommodates a single-stage solid-fuel engine. Its characteristics are sufficient to accelerate the rocket to high supersonic speed and deliver the warhead 200-240 km. The engine is started immediately after the rocket is dropped from the carrier aircraft.

It is possible that the missile can be used by other aircraft. It is intended for foreign customers, who are armed with various types of equipment. By ensuring compatibility with different media, CASIC will be able to expand the circle of potential buyers of weapons.

The CM-400AKG missile is proposed to be launched at altitudes from 8 to 12 thousand meters at high subsonic carrier speeds. After separation from the aircraft, the rocket starts the engine and continues flying at a considerable height. It is assumed that such a flight profile of the aircraft and missiles can reduce the likelihood of their destruction by enemy air defense systems.

In the area of ​​the target, the anti-ship missile must go into a dive with a large angle, look for the target and aim at it. At the same time, maneuvering is possible, and several GOS complement each other, specifying the location of the target and leveling out the effect of interference. The defeat of the target occurs as a warhead, and due to the high kinetic energy of the rocket.

Already in 2012, China announced the imminent sale of CM-400AKG missiles to the armed forces of Pakistan. Tentatively in 2014-15. two countries jointly tested new weapons on Pakistani aircraft. After that, they signed a formal supply agreement, and soon the first batch of missiles went to the customer.

RCC at the time of uncoupling. Tests, tentatively 2014-15 Photo Sina.com.cn
In 2017-18. Pakistan received 60 new model anti-ship missiles with a total cost of approx. 100 million US dollars. The carrier of such weapons, as originally planned, was the JF-17 fighter-bomber. The receipt of a new missile weapon has seriously expanded its range of tasks and increased the overall combat potential.

No other export contracts have been reported. Chinese aircraft manufacturers continue to carry their exhibitions of FC-1 aircraft and weapons for them. It is possible that in the near future such an advertisement will do its job, and thanks to it a new order from a particular country will appear. Chinese anti-ship missiles are quite popular among the developing countries of Asia, and the new CM-400AKG is quite able to interest them.

Chinese industry produces a number of models of anti-ship missiles, and some of these products are offered for export. RCCs for sale to third countries have different characteristics, differ in basing methods, guidance principles, etc. In fact, a potential customer gets the opportunity to study Chinese offers and choose a rocket that fully meets his requirements.

From this point of view, the CASIC CM-400AKG product, introduced in 2012, covers the niche of an airborne supersonic high-altitude anti-ship anti-ship missile. The commercial calculation for this sector of the market as a whole has been justified. One country has already ordered new weapons, and new contracts are possible. If the CM-400AKG does not interest anyone else, the RCC of other models will bring profit.

We are in Yandex Zen
About the future of underwater robotics
Chinese anti-ship missiles. Part 2
18 comments
Information
Dear reader, to leave comments on the publication, you must to register.