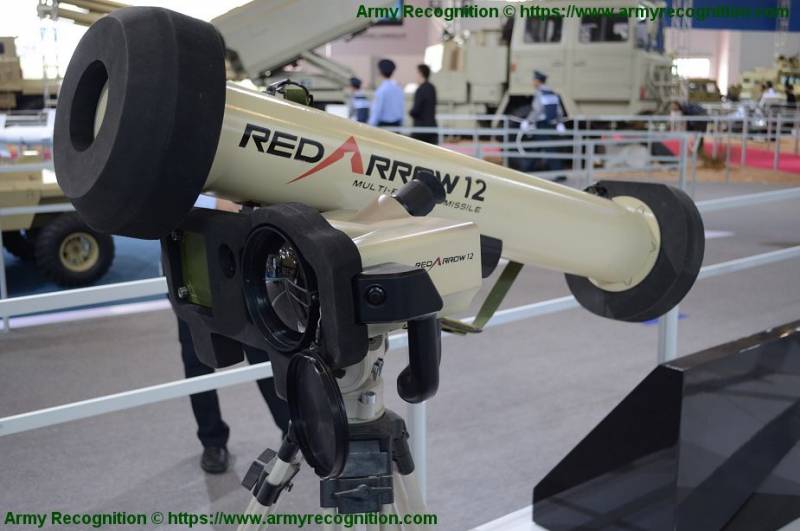 To date, several countries have developed the so-called anti-tank missile systems. third generation - systems that use the principle of "shot-and-forget." A few years ago, China introduced its development of this kind. ATGM HJ-12 developed by NORINCO Corporation adopted by the PLA, and is also shipped to foreign customers.

In July 2014, at the French Eurosatory exhibition, the Chinese corporation first showed the layout of the promising ATGM HJ-12 or Hongjian-12 (Red Arrow-12); export name HJ-12E or Red Arrow 12. This was the first system of the current third generation, created in China. Subsequently, the HJ-12 was repeatedly shown at various exhibitions.

According to official figures, the Hongzian-12 is a multi-purpose missile system capable of hitting enemy armored vehicles. When developing the complex, the main modern trends observed in foreign projects were taken into account. ATGM made as compact and lightweight as possible, which allows you to start from the shoulder. Capture the target before launch; The principle of "shot-forgot" is implemented.

The promising Chinese ATGM with its characteristic capabilities quickly enough was called an analogue and competitor of a number of advanced foreign systems. First of all, the HJ-12 was compared with the American FGM-148 Javelin ATGM. Also remembered the portable versions of the Israeli Spike. The declared characteristics showed that the Chinese complex, at least, is not worse than foreign samples.

According to its general architecture, the ATGM HJ-12 is similar to some foreign developments. The complex in a combat position consists of a transport and launch container with a guided missile and a unit of equipment responsible for finding targets and entering data into the rocket. The total length of the ATGM is 1,2 m, and the mass is 22 kg. Due to its light weight and size, the complex can be used without a machine, from the shoulder. 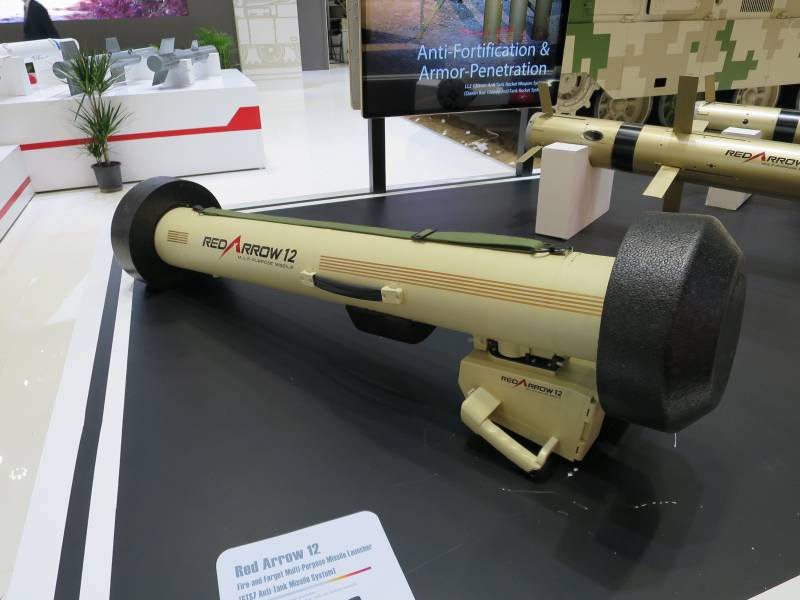 View from a different angle. Photo of Wikimedia Commons
Startup control is carried out using an aiming device mounted on the TPK. On the front wall of this unit there is a large lens for day and night optics; the eyepiece is located behind. A laser rangefinder is provided. Using such devices, the operator has the opportunity to inspect the area at any time of the day, search for targets, capture them and launch the rocket.

The missile of the HJ-12 complex has a length of 980 mm with a diameter of 135 mm. It is performed in a cylindrical body with a transparent hemispherical head fairing. In the center and tail of the hull there are folding wings and rudders. Starting weight of the product is 17 kg.

The missile is delivered in a disposable composite TPK, which has connectors for connecting to the sighting device. A belt and a handle are provided for easy carrying. At the ends are large protective washers made of soft material. After the shot, the container is removed from the control unit, and a new one is put in its place.

ATGM complex is traditional for such weapons layout. The homing head is located in the head compartment. A tandem cumulative warhead is placed behind it. The tail compartment is given under the solid-fuel engine with side nozzles and steering cars.

HJ-12 uses infrared seeker. Before starting, the sighting equipment of the complex sends data about the target to the GOS and the autopilot, after which it is captured. Flight to the target takes place in a fully autonomous mode. At the end of the trajectory, the rocket performs a vertical maneuver to hit the target from the upper hemisphere, in the least protected projection.

Tandem warhead, according to the manufacturer, provides penetration up to 1100 mm of homogeneous armor. The presence of a leading charge allows you to hit armored vehicles equipped with dynamic protection. A powerful warhead and a specific flight profile can dramatically increase the likelihood of a successful defeat and destruction of the selected target. 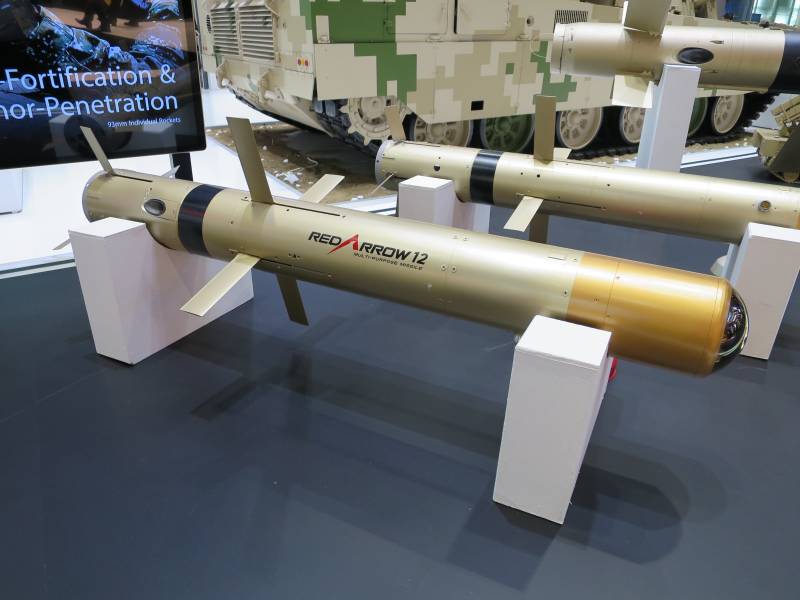 Missile in flight configuration. Wikimedia Commons Photos
The missile leaves the TPK with a light starting charge. Thanks to this, it is alleged that anti-tank systems can be used not only in open areas, but also from premises. At a distance of several meters from the launcher, the rocket includes a solid propellant marching engine. Maximum firing range - 4 km. In the dark, the firing range is limited by the characteristics of the optics and is halved.

In the framework of the Hongjian-12 project, Chinese specialists for the first time managed to create and bring to production a modern ATGM that meets the requirements of the latest generation and shows fairly high performance. The new complex has significant advantages over other systems of Chinese development and can, at least, successfully complement them.

From the moment of the first demonstration, the HJ-12 complex has been compared with leading foreign samples, and such assessments of capabilities are of great interest. According to its "tabular" characteristics, the Chinese anti-tank missile system is not inferior to foreign developments or even surpasses them.

The first third-generation ATGM for shooting from the shoulder was the American FGM-148 Javelin. In its dimensions, it almost does not differ from the HJ-12, although it is slightly heavier. The Javelina missile is slightly longer and has a smaller caliber. Launch range with standard devices is comparable - 4 km. At the same time, for FGM-148, penetration of not less than 750 mm of armor per DZ is declared - significantly less than that of the "Red Arrow".

In the Israeli Spike family, the Spike-LR systems of two modifications can be considered a competitor to the HJ-12. The Spike-LR missile weighs 14 kg, but the combat-ready complex has a mass of almost 45 kg and is used with a tripod machine. Flight range - 4 km, penetration - 700 mm. The Spike-LR missile can operate on a “shot-forget” basis, but has an auxiliary communication channel with the operator, which gives certain advantages.

In 2018, the Israeli army received the first Spike-LR II ATGMs. They are characterized by reduced weight and improved performance. In particular, a rocket weighing less than 13 kg now flies 5,5 km. Penetration rate warhead increased to 1000 mm. All other benefits of the predecessor are retained. 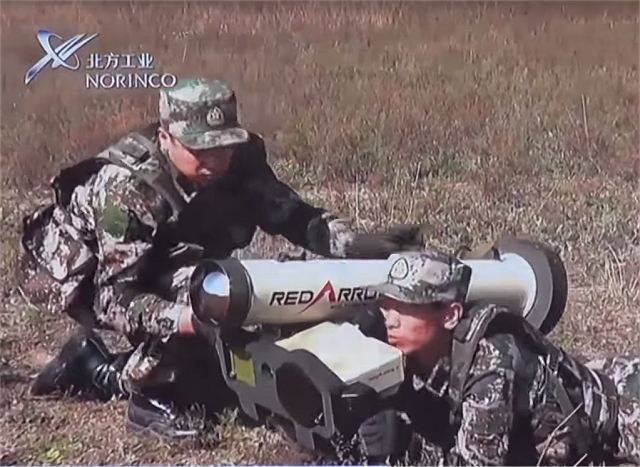 Preparation for launch. Photo by NORINCO
Thus, the new Chinese anti-aircraft missile system "Hongjian-12" looks quite interesting and promising development. However, some foreign samples from market leaders are already circumventing it in all major respects.

For your own and alien army

ATGM HJ-12 was first shown in 2014, and since then he regularly appeared at various exhibitions. Information appeared about the upcoming deliveries of such weapons of the People's Liberation Army of China. Its export version of Red Arrow 12 / HJ-12E was waiting for its overseas customer.

According to some reports, the "Hongjian-12" has already been adopted by the PLA, went into production and is supplied to the troops. The volumes of such deliveries, the cost and distribution characteristics of the troops remain unknown. We can only assume that the promising HJ-12 products are not yet the most popular and in this respect only complement the ATGMs of previous models.

In late March, NORINCO Corporation announced the shipment of the first batch of HJ-12E export facilities. The quantity and cost of the delivered systems are not specified. They also did not name a specific customer, but noted that this country is currently in dire need of anti-tank missiles. Despite the holidays and the epidemic at the beginning of the year, the manufacturer not only completely completed the order, but also shipped the products ahead of schedule.

Thus, one of the main participants in the international market of anti-tank missile systems not only expands its product range, but also finds customers for the systems of the current third generation. It can be expected that in the near future NORINCO will receive and execute new orders for the HJ-12, and this will strengthen its market position. However, even after that, the Hongjian-12 complex will have to face stiff competition.

Ctrl Enter
Noticed a mistake Highlight text and press. Ctrl + Enter
We are
T-14 vs. VT-4. Fight in the open spaces of the information spaceFailures and good luck of the western projects on the armored personnel carrier and BMP. 2014 Results of the Year
26 comments
Information
Dear reader, to leave comments on the publication, you must to register.