Family of patrol ships, pr. 1135 "Petrel": half a century in service 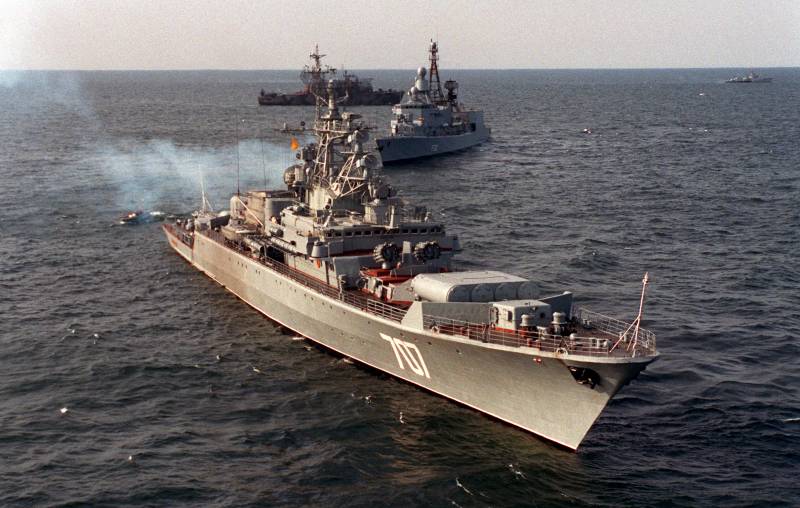 TFR “Watchful” and ships of the foreign Navy during a joint exercise Baltops-93, June 1, 1993. Photo by US Navy

According to Izvestia, in mid-May, one of the oldest Russian ships will go to sea again. fleet - the watchman “Ladny”, built according to the project 1135 “Petrel”. Returning to the combat structure of the Black Sea Fleet, the “Ladny” will again be able to serve along with other “Petrels”, built on improved versions of pr. 1135. History This project is of great interest. The design, created back in the sixties, had the highest modernization potential used so far.

The tactical and technical task for a new patrol ship (TFR), capable of conducting long patrols and escorting naval groups, protecting them from various attacks, was issued in 1964. In 1968. Leningrad Central Design Bureau-53 (now Northern Design Bureau) completed the design work on the topic "1135" / "Petrel", and soon the construction of the watchtower "Watchful" began at the Yantar plant (Kaliningrad). At the very end of 1970, he joined the Baltic Fleet.

Series construction of the Petrels was carried out at the Yantar Kaliningrad, at the Leningrad Plant named after Zhdanova (now “Severnaya Verf”) and on the Kerch “Gulf”. From 1968 to 1980, enterprises laid down 21 new-type TFRs. Ships were intended for all four fleets of the Navy of the USSR. The last ship handed over "under the tree" in 1981. 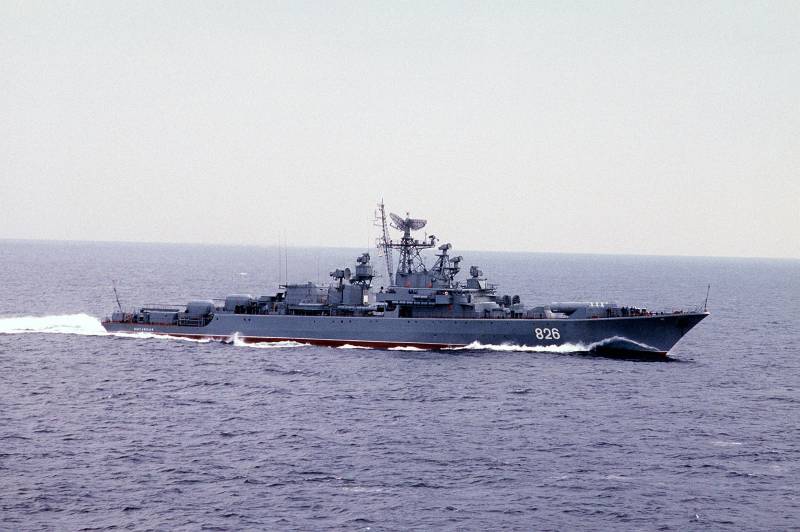 "Inquisitive" modernized project 1135M during military service in the Mediterranean, November 1, 1986. Photo by US Navy
The service of most ships of the first series lasted until the nineties and two thousandths. After the collapse of the USSR, several watchdogs went to Ukraine. In addition, during this period, ships began to be written off due to moral and physical obsolescence, as well as due to the impossibility of further operation. Based on the results of these events, only one TFR of Pr. 1135, the Ladny, built in 1979–80, remained in the Russian fleet. Now he is completing repairs and soon has to go to sea again.

Due to insufficient firepower, the AK-726 twin gun mounts were replaced by AK-100 products with a larger caliber gun and the MR-145 Lion fire control radar. GAS type MG-332 "Titan-2" was replaced by a newer MG-332MS "Titan-2T". Also, there were other improvements of various kinds.

The lead ship, pr. 1135M, was laid down at the end of 1973 and was taken into the Navy two years later. The construction of the series continued until the early eighties. The last 11th ship of the series, “Inquisitive”, surrendered to the fleet at the end of 1981. The ships were again distributed among all the fleets of the USSR Navy. 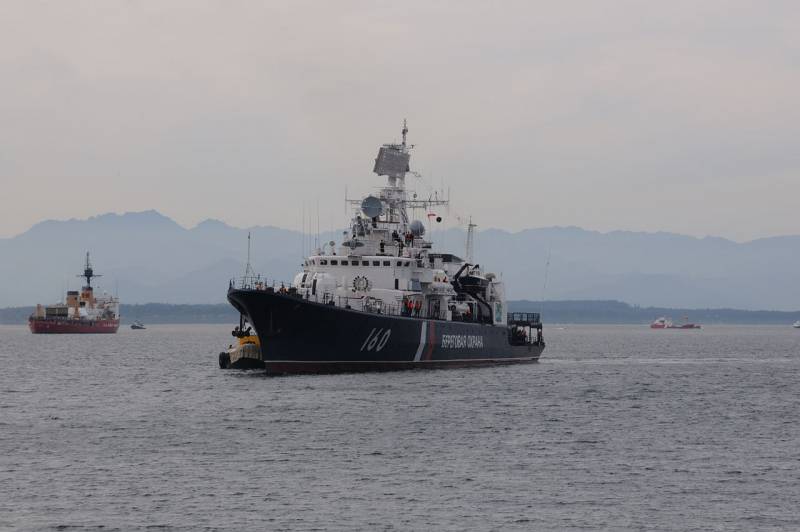 TFR "Thieves" FSB border troops, 2009. Photo by US Coast Guard
The modernized Petrels mostly served until the turn of the nineties and two thousandths, after which they were decommissioned and disposed of. Only the ship “Inquisitive” remains in service. Like the older "Ladny", he serves in the Black Sea Fleet.

In 1980, shipbuilders received an order from the KGB - the existing patrol officer, project 1135, was required to be finalized for use in naval units of the border troops. The new project 1135.1 "Nereus" was again developed at TsKB-53.

Border TFR lost the RBU-6000 anti-submarine system; the AK-100 product from the Lev radar was moved from the stern to the place of its launcher. Also, the Osa-M air defense system was removed from the stern, and the vacated space was used as a helipad. Two AK-630M units with MP-123 "Vympel" control radar were placed onboard. The hydroacoustic complex was updated using products of MGK-335 Platinum and MGK-345 Bronze.

Watchmen of the Nerey Ave. have been built at the Zaliv factory since 1981. Before the collapse of the USSR, the KGB border troops managed to get seven ships; two more remained at different stages of construction. The eighth ship of the series went to Ukraine - now it is the flagship of its Navy “Getman Sagaidachny”. The ninth ship, laid down in 1992, a few years later was dismantled on a slipway.

From 1998 to 2002, four guard patrols wrote off the Russian border troops. Not so long ago, in 2017, he finished the fifth, "Thieves." Two ships remain in service - the Eagle and the Dzerzhinsky.

In the early eighties, the question was raised of the modernization of cash ships in order to increase their combat capabilities. In 1983, a modernization project 1135.2 was prepared, offering a radical modernization of electronic, sonar and missile weapons. Installation of new systems could be carried out during the overhaul of the ship. 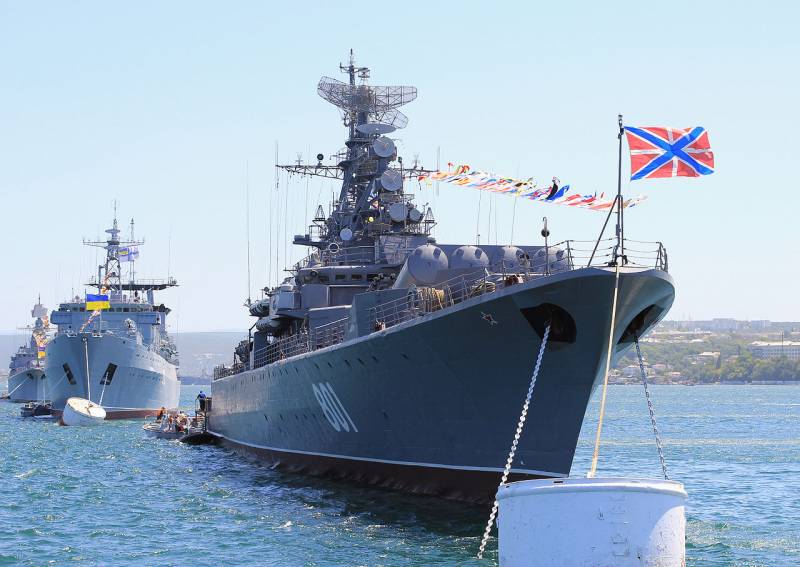 The Russian watchman “Ladny” and the ships of the Ukrainian Navy, 2012. In the background is visible “Getman Sagaidachny”, built at 1135.1 Ave. Wikimedia Commons Photos
Etc. 1135.2 proposed the removal of the anti-submarine complex and the installation of the Uranian strike system with anti-ship missiles. The old gas tanks were replaced by a single MGK-365 Zvezda-M1 GAK. A major update of the radar complex was envisaged.

The modernization of ships was entrusted to several enterprises at the place of service of the ships. The process of repair and re-equipment began at the same time with the notorious Perestroika - and by the collapse of the USSR only three patrolmen had time to update. Two of them served until the 2012s, and the third was decommissioned in XNUMX.

Another project, 1135.3, proposed replacing the URPK-4 Metel anti-submarine complex with the newer URPK-5 Trump, as well as upgrading sonar systems using the Zvezda-M1 GAK. Such equipment and weapons were taught only by Zharkiy TFR to their composition in the Northern Fleet. He continued his service until 2002.

In the nineties, the Northern Design Bureau developed a new version of Burevestnik Ave., this time with an eye on the foreign market. The original design of the guard was revised taking into account current trends, possible wishes of customers and promising weapons systems. The final version of such a project, brought to the series, received the number 1135.6 (11356) and the Indian name Talwar.

During the processing of previous projects, only the main hull structures and part of the common systems were retained. The rest was completely redesigned with the introduction of a modular architecture, simplifying how to change the project taking into account the wishes of the customer, and subsequent modernization. After such changes, the ship became a little longer, and the total displacement increased from 3,19 thousand tons to 4 thousand tons. 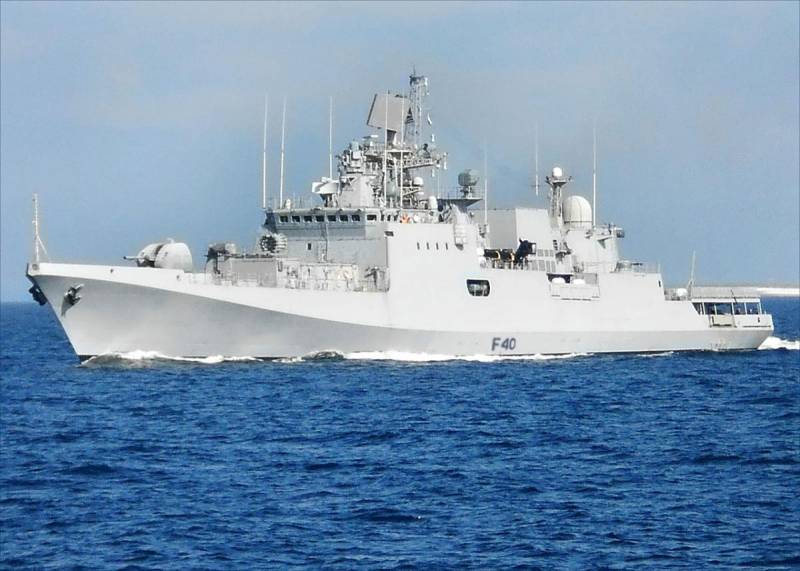 The frigate "Talwar" is the lead ship of pr. 11356 for the Indian Navy. Photo of the Indian Navy
Talvar was equipped with modern domestic and foreign electronic and hydroacoustic equipment. The basis of the armament complex was the 3C-14 universal launcher with 8 cells for the missile defense complex of various types of missiles. Initially, the main shock weapons were Club-N missiles, then there was the possibility of using BrahMos products. The ship retained a 100-mm gun mount, but received new anti-aircraft weapons.

In 1999, the laying of the first ship of project 1135.6 for the Indian Navy took place at the Baltic Shipyard. This order provided for the delivery of three ships - they became part of the fleet in 2003-2004. In 2007-11. Yantar plant has built a second series of watchdogs. Since the summer of 2013, the Indian Navy has six Talvars.

In the two thousandths, on the basis of pr. 11356, a new pr. 11356R was created. The essence of the new project was the processing of the export Talvar, taking into account the requirements of the Russian Navy. The main approaches to the design and selection of components remained the same, but the composition of weapons and equipment changed.

In 2010 and 2011, the Russian Ministry of Defense placed two orders for six new guard / frigates. In the future, the possibility of building three more was considered. It was supposed to transfer ships to the Black Sea, Baltic and Pacific fleets, but then such plans were reduced. All frigates built were to enter the Black Sea Fleet. 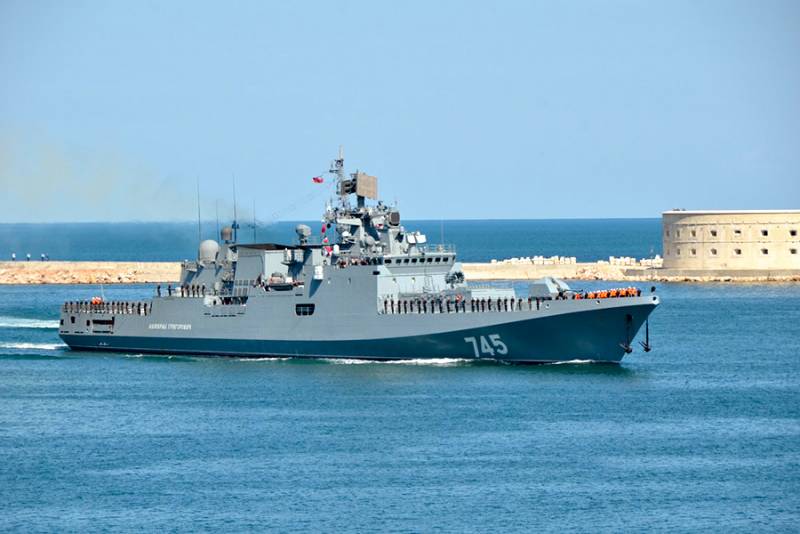 "Admiral Grigorovich" - the head frigate of pr. 11356R. Photo by the Ministry of Defense of the Russian Federation
The lead ship Admiral Grigorovich was laid at the end of 2010 and was accepted into the fleet in 2016. A few months later, the flag was hoisted at Admiral Essen, which has been under construction since 2011. At the end of 2017, the fleet received the frigate Admiral Makarov.

The construction of three other ships ran into a problem. In 2014, the Ukrainian industry refused to supply the necessary power plants, and TFRs under construction were left without engines. In the future, various messages about possible actions and measures repeatedly appeared. Construction could be frozen or continued using Russian power plants - with a serious lag behind the original schedule.

In July 2019, it became known that three unfinished ships were bought by India. The Russian plant will continue to build, and the Indian side, bypassing Russian shipbuilders, should acquire Ukrainian engines. The delivery of three ships of the Indian Navy is expected in 2023-24.

Half a century in service

December 31, 2020 marks exactly 50 years since the commissioning of the first patrol ship, pr. 1135 "Petrel". The first Vigilant was followed by another 19 ships of the original design and 11 modernized. Subsequently, four such TFRs underwent modernization to 1135.2 and 1135.3. Also, the industry built 8 border ships "Nereus". According to the latest projects, 11356 and 11356P built six ships for India (three more are under construction) and three for Russia. 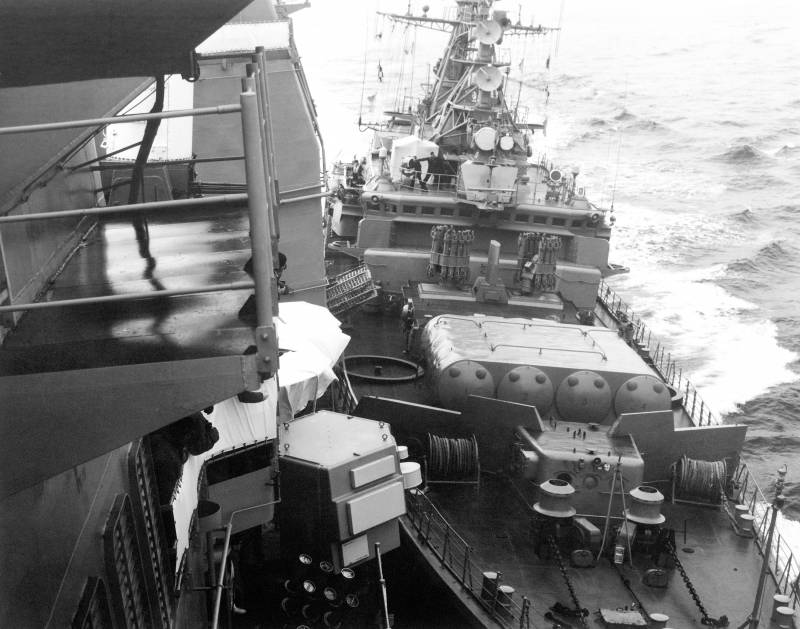 Perhaps the most famous episode in the history of 1135 Ave. The TFR "Bezavavetny" displaces the American cruiser from Soviet territorial waters. February 12, 1988, view from a cruiser. US Navy Photos
To date, 1135 ships have been built for all projects of the 48 family, and in the near future new ones will go to sea. At the same time, over the past half century, most of the watchdogs have completed their service. Now the Russian Navy has only two ships of early projects and three modern pr. 11356R. At the disposal of the FSB border troops there are two ships of Project 1135.1. Seven combat units are serving in foreign fleets - these are mainly modern Talvars.

The history of project 1135 and its derivatives is of great interest. The basic project of the family was created in the mid-sixties according to the requirements of its time. In the future, the requirements changed, and the project was finalized in one way or another. Finally, at the end of the last century, the project underwent a radical revision - but with the preservation of a significant part of the features.

As a result, as part of the Russian Navy, you can simultaneously observe the watchmen “Ladny” and “Inquisitive”, built at the turn of the seventies and eighties, as well as completely new frigates of the “Admiral series”. All this became possible thanks to the highest modernization potential of the project, laid down more than half a century ago.

Ctrl Enter
Noticed a mistake Highlight text and press. Ctrl + Enter
We are
Pirates under escort. Russian Navy against the "black" operations of foreign intelligence servicesShips built for 28.07.2013 of the year for the Russian Navy. Part of 1
56 comments
Information
Dear reader, to leave comments on the publication, you must to register.