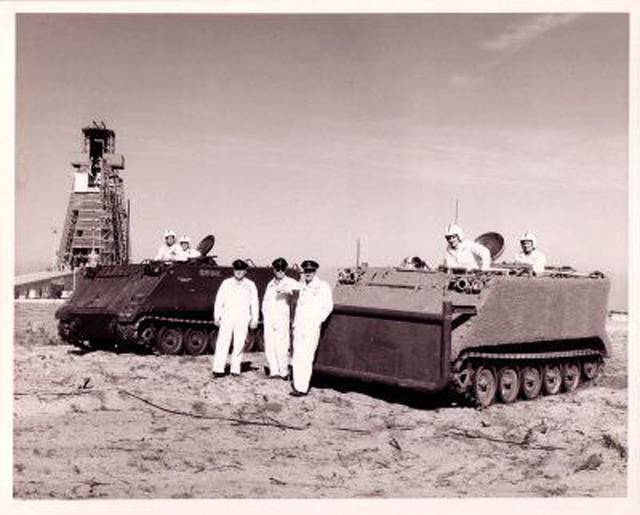 A pair of armored personnel carriers in the early years of service. One of the cars is equipped with a frontal shield. Photo Tanks-encyclopedia.com

Any launch of a space rocket involves certain risks for people and equipment, which is why appropriate measures must be taken. Already in the sixties, NASA created a set of systems designed to ensure the safety of people on the launch pad in case of emergency. Perhaps the most interesting element of this complex was the specially converted M113 armored personnel carriers.

Elaboration of rescue issues at the launch pad began in the early stages of the Mercury program. In the future, new means of salvation were created and improved, and during the Apollo program their final appearance was formed. With these or other changes, all the fixed assets of this complex have survived to the present day and remain in operation. 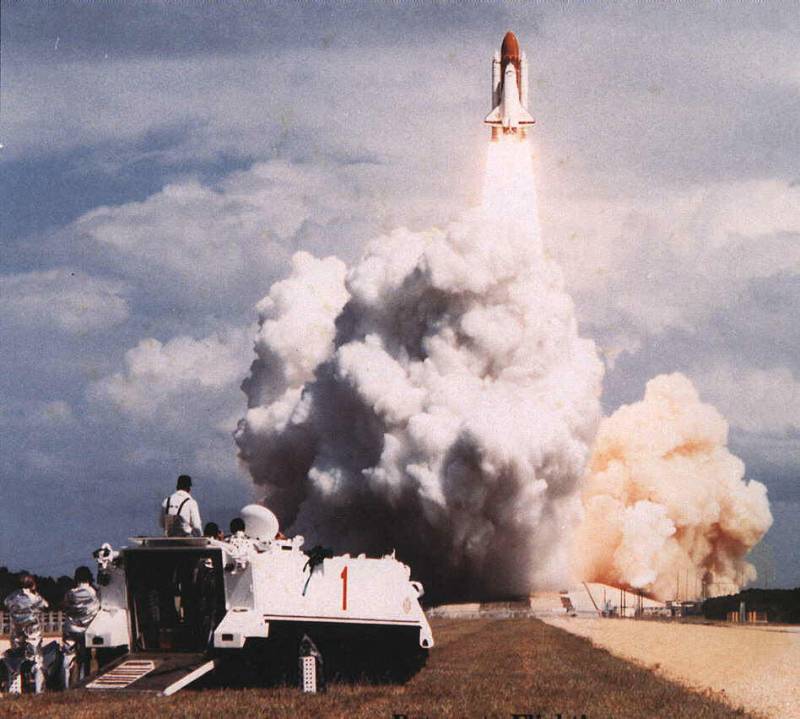 Rescuers watch the take-off of Space Shuttle. Eighties - APC repainted in white. Photo Tanks-encyclopedia.com
One of the tasks of the engineers was the evacuation of astronauts and personnel from the service tower. Rescue from the upper tiers was to be ensured by the zipline system - special baskets, moving along the cable, lowered people to the ground and took them to a distance of almost 800 m.On the ground, people had to hide in a protected bunker, from where they could be picked up by suitable transport.

The urgent problem of safe evacuation of people from the lower levels of the site was also relevant. Finally, fire brigades needed vehicles capable of protecting them from fire and flying debris.

Both questions found a common answer. NASA has decided to purchase several serial M113 armored personnel carriers. After some refinement and re-equipment, such a technique could find a place on the launch pad and contribute to the safety of launch participants. 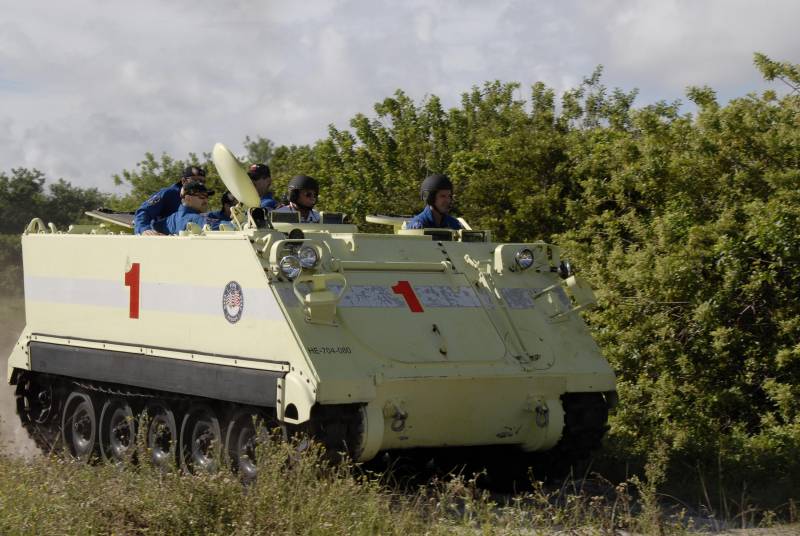 An order for new equipment appeared in the mid-sixties, and soon the Space Center. Kennedy received the four required armored vehicles. In terms of design, they did not differ from the serial army, but when leaving the factory they had a different set. In addition, NASA experts slightly modified the APC, taking into account the new role.

M113 for NASA from the very beginning did not have weapons and other equipment necessary for military equipment. As the operation continued, new units were installed on the equipment - or they were removed. Such modernization could affect all available APCs or some of them. Despite all the improvements, the general characteristics remained the same and corresponded to the tasks.

Almost immediately after commissioning, almost all M113 received additional protection against fire and heat. A vertical shield was mounted on the forehead of the case, covered with heat-resistant asbestos-based paste. Later, such devices were dismantled. Repeatedly changed the design of the commander's towers, providing surveillance of the terrain. 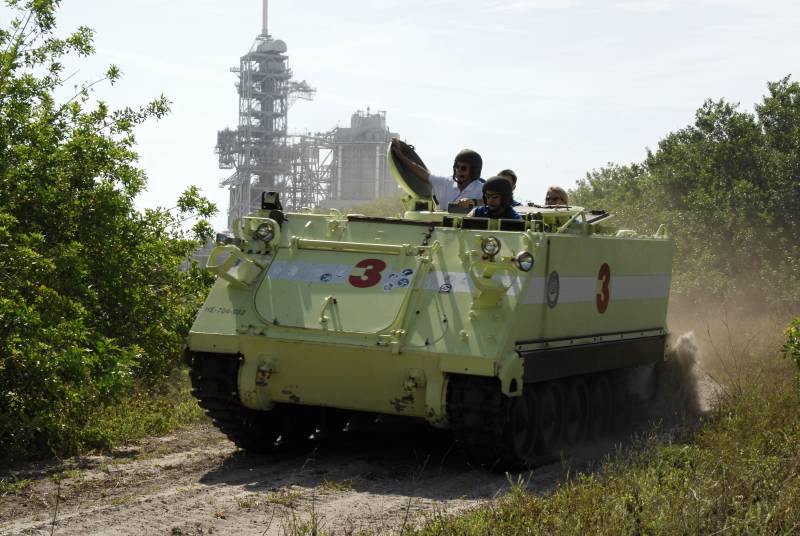 The crew of the mission STS-131 mastered ground equipment. NASA Photos
Over several decades of operation, the "space" M113 managed to change their color several times. Initially, they had a dark color with white marks, numbers, etc. - as a technique of the armed forces. In the seventies, armored personnel carriers repainted in white. At the same time on the front and side sheets of red paint caused the numbers of cars, from "1" to "4". In recent decades, APCs have been yellow-green in color and carried horizontal reflective stripes. The rooms stayed red, but became smaller.

The use of new armored vehicles was regulated by the rules and instructions. According to them, both rescuers and astronauts should have been trained in driving. They should have been able to drive an APC and handle its main systems. For several decades, field trips to the M113 have been a mandatory part of the spacecraft crew training program. 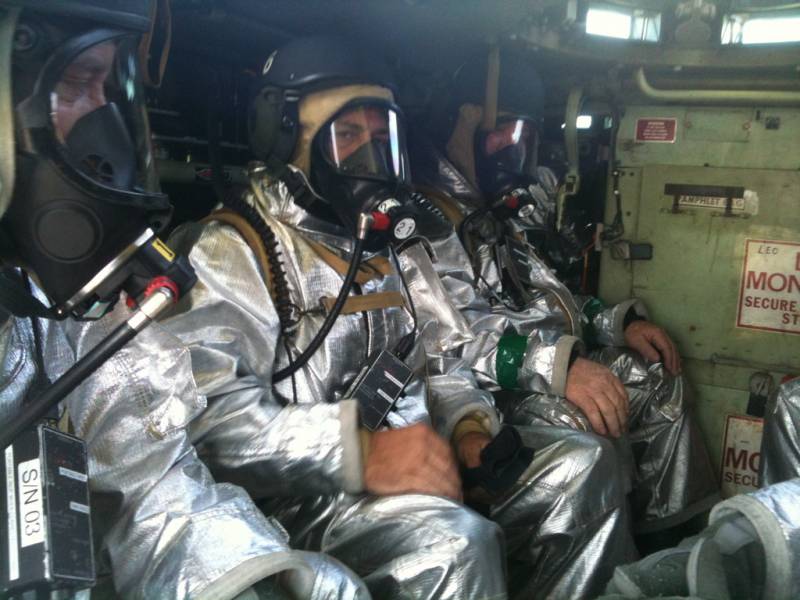 Rescuers in their places. NASA Photos
Three armored personnel carriers participated in the launch; the fourth was reserve. Two cars stood out to the rescue team. Firefighters used fireproof suits and insulating breathing apparatus. In direct preparation for the launch, two armored personnel carriers advanced to positions 1,5 km from the launch pad. A few minutes before the launch, they were fully equipped, took places in the troop compartment and closed the hatches.

In the event of an accident, the rescue team had to go to the launch pad, search for the injured and evacuate them. This was given no more than 10 minutes - due to restrictions on the breathing apparatus of personnel.

The third armored personnel carrier was located near the doors of the bunker at a distance from the launch pad. He was completely ready for work and stood empty with the stern ramp open. In the event of an accident, this particular machine was to ensure the evacuation of astronauts from the danger zone. 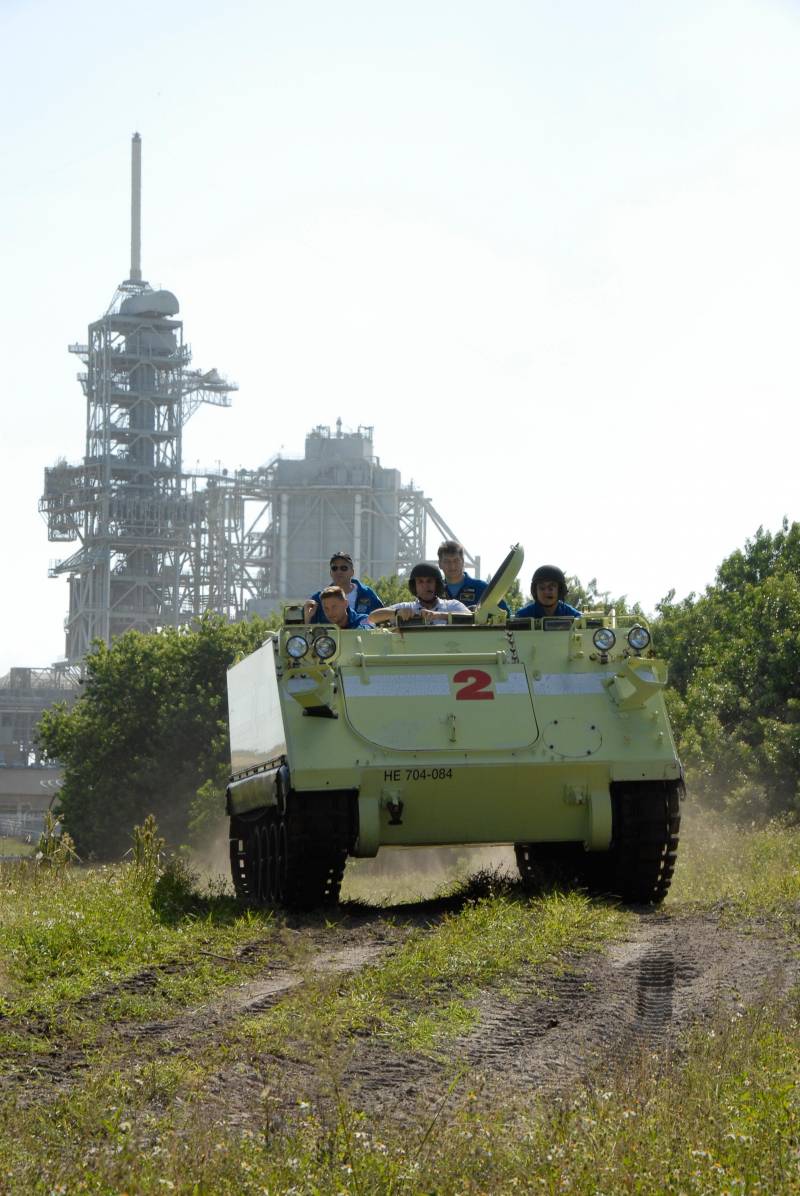 A trip around the territory near the launch complex. NASA Photos
In the event of an emergency and a decision to evacuate, the astronauts had to leave the ship and begin the descent in baskets. Then they had to hide in a buried bunker. In the absence of interference, they could leave the shelter, take places in the APC and leave the accident zone. Such evacuation was carried out independently - one of the astronauts became the driver of the armored personnel carrier.

Over time, some features of the use of M113 in launch complexes changed. Positions were transferred, techniques improved, etc. At the same time, the basic principles remained unchanged. One armored personnel carrier was supposed to ensure the evacuation of astronauts, the other two - the work of rescuers and the removal of victims.

M113 entered service at NASA in the mid-sixties. The work of this technique began with the provision of launches under the Apollo program. In connection with the advent of armored personnel carriers, the astronaut training program was adjusted by adding courses on the management of such equipment. Of particular interest in this regard is the preparation of the latest missions as part of the lunar program. Astronauts had to study the control of a spaceship, a lunar rover and an Earth armored personnel carrier - a curious and unique combination. 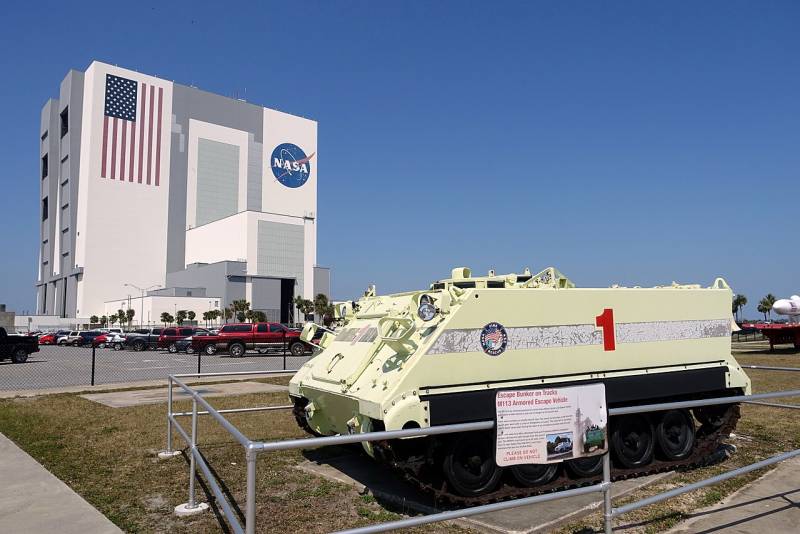 Armored vehicle monument. NASA Photos
After completing the Apollo program, NASA began preparations for operating the Space Transportation System complex with the Shuttle shuttle. As part of this training, modernization of launch complexes in general and rescue systems in particular was carried out. At the same time, M113 armored personnel carriers remained an important part of security measures. As before, one of the armored vehicles was intended for use by astronauts, and the corresponding training remained in their training program.

During their service, the M113 was present at 15 launches of the Apollo series ships and at 135 Space Shuttle launches. The preparations for these launches were generally regular, and the launches themselves took place without accidents - the help of armored vehicles and its crews was not required. Nevertheless, two armored personnel carriers with rescuers, one empty car and one backup were ready at any moment to help astronauts in trouble. 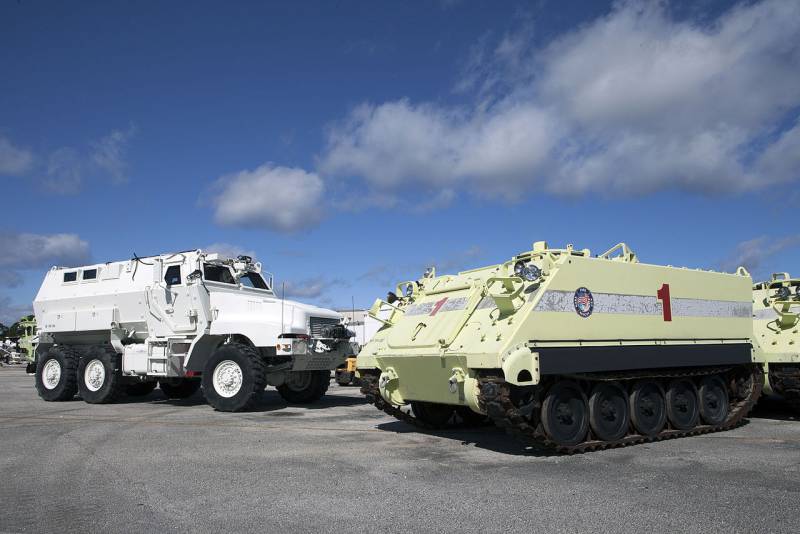 The service of the four "space" armored personnel carriers lasted almost half a century. In 2013, it was decided to decommission this equipment due to obsolescence and resource development. For the M113, they found a modern replacement, and the machines themselves went into storage. One of them, bearing the number "1", soon became a monument.

For transportation of rescuers and astronauts, four wheeled armored vehicles BAE Caiman MRAP are now used. In terms of protection, they are similar to the old M113, but are more easy to manage and maintain. There is a spacious landing compartment, more convenient for rescuers with equipment or astronauts in spacesuits. In addition, new machines have a full resource, the development of which will take decades. 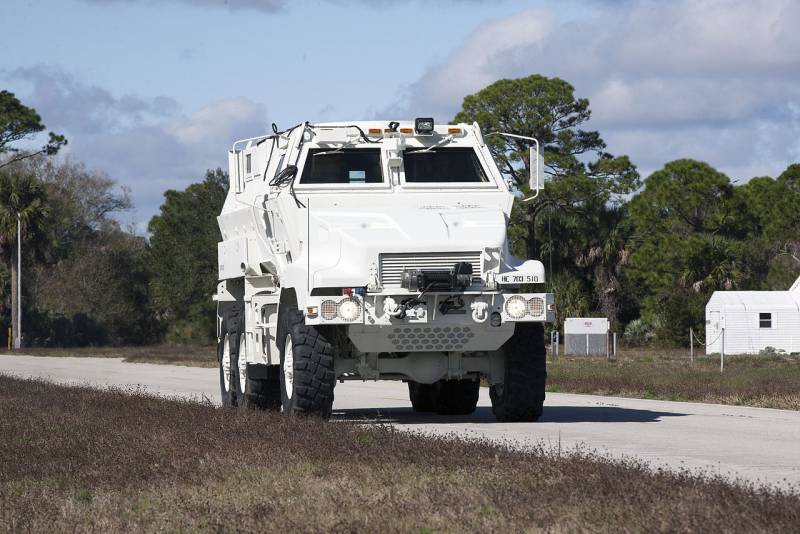 Cayman on the track. NASA Photos
However, the full operation of the "Cayman" with the solution of the assigned tasks has not yet begun. In 2011, even before receiving such equipment, NASA curtailed the STS program and stopped manned launches from its sites. As a result of this, the evacuation technique is so far used only for training personnel. In the near future, NASA plans to resume its manned program, so that the armored cars finally begin normal operation.

Fortunately, in recent decades, NASA has been able to carry out manned launches without an accident at the preparation or launch stage. As a result of this, the M113 armored personnel carriers repeatedly participated in the organization of launches, but they never started to carry out the assigned tasks. What will be the service armored Caiman - is unknown. Conclusions of this kind can only be made after launches of manned spacecraft resume in the USA.

Ctrl Enter
Noticed a mistake Highlight text and press. Ctrl + Enter
We are
Armament of domestic armored personnel carriersFamily BTR-60 / 70 / 80 in combat
26 comments
Information
Dear reader, to leave comments on the publication, you must to register.