Construction of the armored forces of Bulgaria: import and cooperation 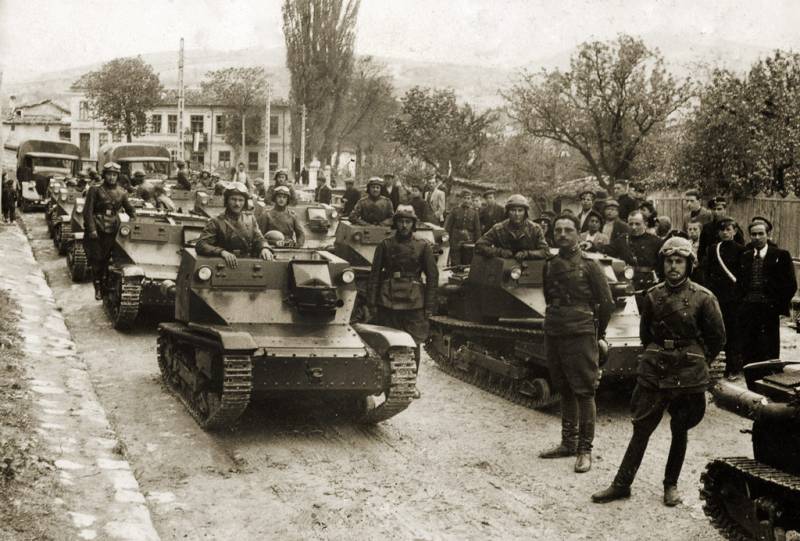 Parade with the participation of Wedge-heels CV-33 from the 1st tank companies, early 1930s. In the frame, almost the entire fleet of such cars

Almost all European states in the interwar period began to build their own armored forces. Not all of them had the necessary production capacity, which is why they had to seek the help of third countries. For example, due to imports, Bulgaria modernized its army.

The Bulgarian army for the first time began to develop armored cars during the First World War. In 1917, its representatives in Germany met with captured tanks of the Entente. However, attempts to obtain and master such equipment were not made, and later became impossible due to the signing of the Neuisk Peace Treaty.

The situation began to change only in the early thirties. Sofia began rapprochement with Berlin and Rome, which eventually led to the emergence of agreements on the construction of new enterprises and the supply of finished military products. The most important events in the context of the construction of armored forces took place in 1934. Then a Bulgarian-Italian contract was signed for the supply of a variety of land combat and auxiliary vehicles.

The first transport with the ordered equipment arrived at the port of Varna on March 1, 1935, and from that day on история Bulgarian armored forces. Several steamboats from Italy delivered 14 CV-33 tankettes with Rada tank cars, artillery tractors, guns, etc. CV-33 was delivered with non-standard weapons: regular Italian machine guns were replaced by Schwarzlose products, which were in service with Bulgaria. 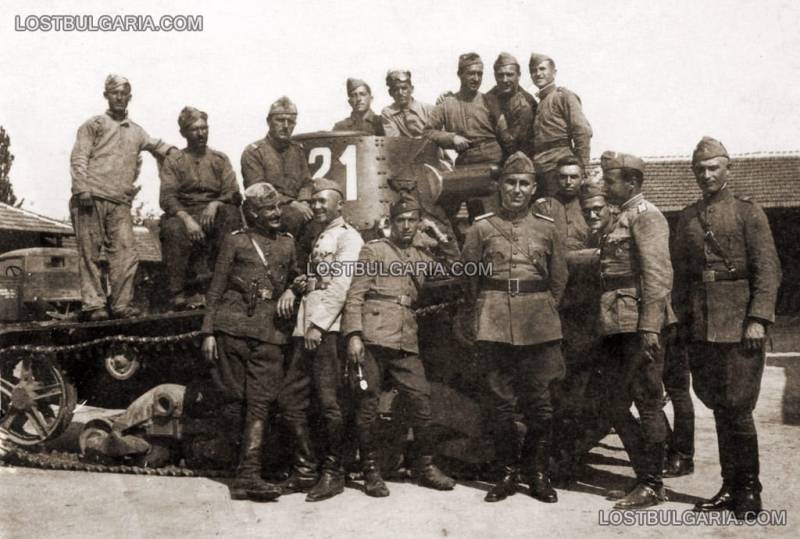 Bulgarian soldiers, officers and tank Vickers Mk E, late 1930s
New wedges were transferred to the 1st tank company, formed as part of the 1st engineering regiment (Sofia). The first company commander was Major B. Slavov. In addition to him, the unit had three officers and 86 soldiers. For several months, the tankers mastered the new materiel, and by the end of the year were able to participate in maneuvers.

Everyone understood that one company on imported wedges, despite its positive qualities, would not give the army real advantages. In this regard, already in 1936, measures were taken to create a 2nd tank company. A unit of 167 soldiers and officers was formed as part of the 1st Engineering Regiment. It is curious that for a long time the company was a tank only in name and did not have tanks.

After the company was established, in early September, the Bulgarian army and Vickers Armstrong signed a contract for eight Vickers Mk E single-turret tanks with British-made weapons. A month later, the Bulgarian government approved the agreement. The production of equipment took some time, and the customer was able to start its development only in the first months of 1938.
Soon the company received all the ordered equipment and divided it equally between its two platoons.

At the beginning of 1939, two separate companies were brought into the 1st tank battalion. Combat companies were supplemented by battalion headquarters and support units. Despite belonging to the same battalion, companies were deployed in different parts of the country. The 1st tank company went south, and the 2nd moved north to the Romanian border. 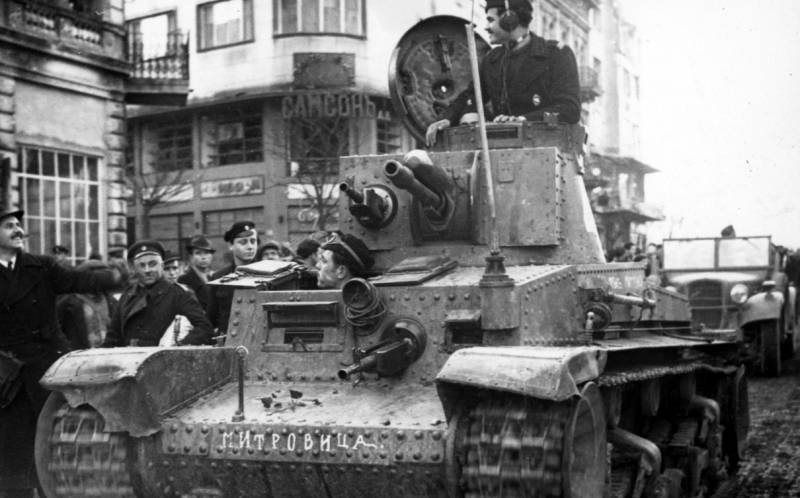 Tank LT vz. 35, now owned by the Bulgarian National Army, December 1944
Two tank companies of the 1st battalion actively participated in training events and regularly worked “in the field”. In particular, the interaction of tanks and tankettes with motorized artillery and infantry was worked out. The results of such events showed the need for further construction and development of tank troops. Soon, appropriate measures were taken.

In the years 1936-37. the Bulgarian army drew attention to the Czechoslovak light tank LT vz.35 and planned to acquire such equipment. However, procurement was delayed due to limited financial opportunities. While Bulgaria was looking for money for the purchase of imported tanks, the situation in Europe changed - a contract for the desired tanks was signed with another country.

In the fall of 1938, Czechoslovakia lost a number of its territories, and in March 1939, Germany completely occupied it. Together with the territories, the Nazis received developed industry and its finished products. A few months later, the first German-Bulgarian agreement on the supply of tanks appeared. In early 1940, the parties began its implementation.

In February 1940, the Bulgarian army took 26 light tanks LT vz. 35. A few months later (according to other sources, only in 1941) another 10 tanks were transferred to Bulgaria. These were cars of the T-11 version, built for Afghanistan and not transferred to the customer.

36 tanks received the 3rd tank company consisting of several platoons; its commander was captain A. Bosilkov. The development of equipment began, and soon a new order arrived. In the summer of that year, the 2nd and 3rd tank companies of the 1st battalion were sent to the Turkish border.

Together with tanks, Germany sold Bulgaria a lot of other materiel, both captured and its own production. In addition, another rapprochement was outlined during this period. Its result was the accession of Sofia to the Rome-Berlin-Tokyo pact, issued on March 1, 1941. 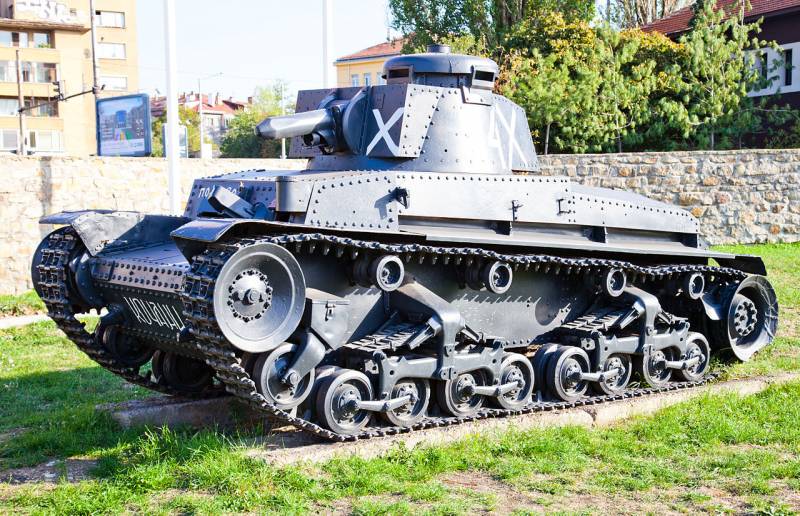 The surviving LT vz. 35 in one of the Bulgarian museums
Against the backdrop of these events, the Bulgarian army decided to strengthen the tank troops. The 2nd battalion was formed. The issue of technology was again resolved with the help of foreign partners and with the help of trophies. At the end of April, a new agreement with Germany appeared. This time she was supposed to deliver 40 French tanks Renault R-35.

In June, two battalions were brought into the 1st Tank Regiment, which became the basis of the tank brigade. The commander of the regiment was Major T. Popov; total number - 1800 people. Together with a tank regiment, the brigade included units of motorized infantry and artillery, reconnaissance, support, etc.

In the fall, large-scale exercises took place, to which a tank regiment was also attracted. In the context of tanks, events began with a lot of problems and almost ended in failure. It turned out that the crews of the armored vehicles have insufficient training and do not always cope with the tasks.

In addition, there were problems with the equipment. So, tanks LT vz.35 / T-11 and Mk E had the desired equipment and demonstrated the necessary reliability. The French R-35 performed extremely poorly. Some of these tanks literally did not reach the landfill due to breakdowns. The actions of other cars were complicated by the complete absence of radio equipment.

To the beginning of the war

Despite the active economic, political and military cooperation with Germany and Italy, as well as the official accession to the Rome-Berlin-Tokyo pact, Bulgaria did not formally participate in the Second World War. Only on December 13, 1941, Sofia declared war on Great Britain and the USA. At the same time, the Bulgarian authorities did not enter into direct confrontation with the USSR. 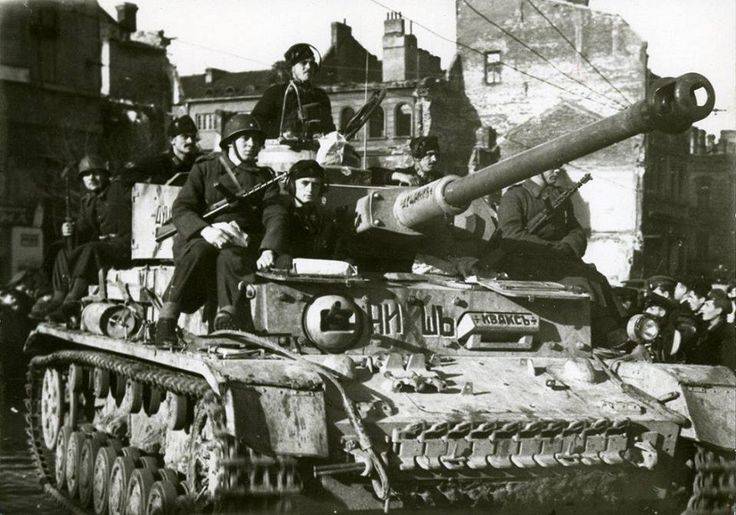 The German PzKpfw IV medium tank, now used against Germany. October 1944
By the time of the official entry into the war, the armored forces of Bulgaria consisted of only one brigade, to the headquarters of which were assigned three tanks LT vz. 35 (one radium). The only tank regiment had two such vehicles at headquarters, including one with a radio station.

The 1st tank battalion of the regiment used two LT vz.35 at the headquarters, the same equipment was operated by two companies. The 3rd tank company received all the Vickers tanks and 5 Italian CV-33 wedges. The 2nd battalion was equipped with the rest of the equipment. The headquarters had one R-35 tank and three CV-33 tankettes. Between the three companies of the battalion distributed all the rest of the Renault, 13 units. The reconnaissance squad of the regiment exploited five Italian tankettes.

Thus, according to the results of the construction of 1934-41. the armored “power” of Bulgaria left much to be desired. In service there were a little more than a hundred armored vehicles, and a significant part of the fleet was obsolete samples. Modern tanks, in turn, had limited combat effectiveness due to breakdowns or lack of radio stations.

The Bulgarian military and political leadership prudently decided not to throw such “troops” into battle against a well-developed and equipped enemy. In addition, at the first opportunity - again with the help of the Allies from the Axis - rearmament was carried out. With its help, the payroll number of equipment has grown by 140%, and modern models with high characteristics have come into service. However, even after that, the Bulgarian army remained not too strong and developed.

Ctrl Enter
Noticed a mistake Highlight text and press. Ctrl + Enter
We are
Armored units of the army of the Kingdom of Yugoslavia in the April war of 1941Great success of small tanks
28 comments
Information
Dear reader, to leave comments on the publication, you must to register.