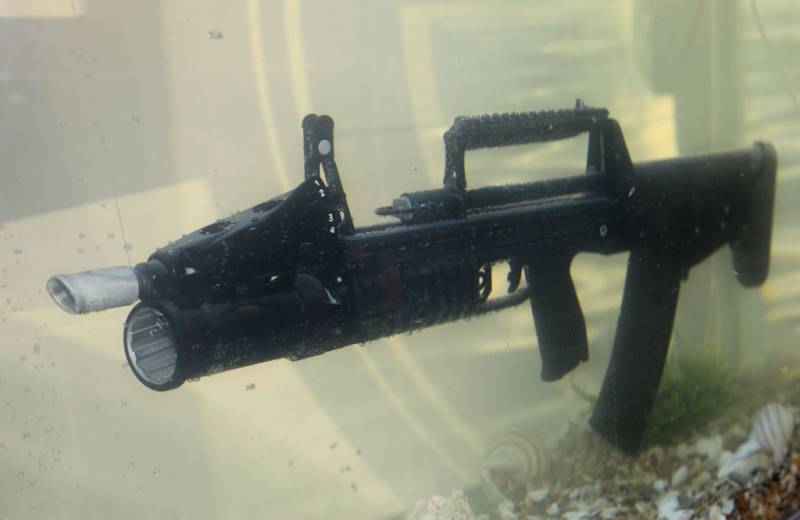 Special two-machine gun, or ADS, is weapon, at the sight of which you feel pride in the Russian defense industry. The unique assault rifle can be effectively used both on land and under water, and it is already in service with the Russian power structures. In 2019, the shipment of the first batches of serial machine guns to the troops began. American journalists could not get past this weapon either. For example, on the website of The National Interest magazine in early April 2020, material on ADS was published. American journalists speak well of the "underwater assault rifle" from Russia, noting that they can’t escape from this Russian weapon even under water.

From development to mass production

ADS was developed by engineers of the Design Bureau of Instrument Engineering from Tula. A new model of small arms was created on the basis of the A-91 rifle-grenade launcher complex, which was created by Tula gunsmiths in the early 1990s. The new weapon was originally created to replace in special units of the Russian armed forces (primarily the Navy) a special submachine gun for underwater firing of the APS and the classic AK-74M. It is worth noting that the Tula gunsmiths were able to successfully solve the task assigned to them. Their novelty, called ADS (special two-machine gun), in terms of accuracy of fire exceeds both AK-74M and APS (on land and under water, respectively).

The draft of the new weapon was completed by 2007, after which until 2013 various work was carried out to improve the design, test prototypes and refine them. The ADF was first introduced to the general public in 2013 as part of the International Naval Salon in St. Petersburg. The machine gun immediately attracted increased public attention as a unique example of small arms. 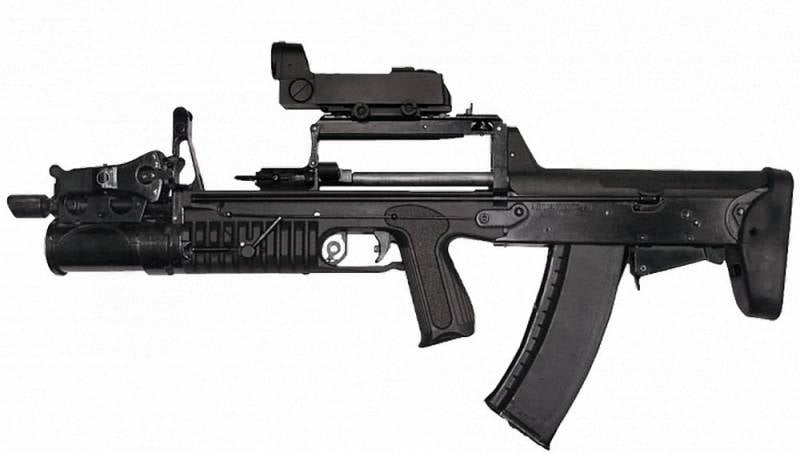 The very idea of ​​the development and the general concept of the ADF belonged to Vasily Gryazev, an outstanding domestic weapons designer, one of the masters of creating small arms in our country. We managed to release weapons in metal after the designer’s death, when his colleagues and students who worked at TsKIB SOO, the Central Design Research Bureau of Sports and Hunting Weapons, which is an organizational part of the Tula Instrument Design Bureau, continued to work on the project.

For a long time, the weapon was refined and went through trial operation directly in the troops. As a result, the armed forces of Russia received the first batch of new ADF submachine guns capable of equally efficiently shooting both on land and under water only at the end of 2019. This was reported by TASS with reference to the press service of the holding "High-precision complexes", which includes the enterprise of Instrument Design Bureau (Tula).

Representatives of the holding "High-precision complexes" said that in Tula mastered the mass production of two-medium automatic machines, and the first batches of ADF were already shipped to the customer as part of the state defense order. Moreover, the machines were in trial operation for several years. For example, previously appeared news that deliveries of individual parties to law enforcement agencies began in 2018. The holding company "High-precision complexes" told reporters that according to the results of the trial operation of the new machines, some improvements to the product were made, aimed primarily at improving the usability of the two-medium machine.

It is clear that the main operators of the machine will be special units of the Russian fleet (primarily combat swimmers). But back in 2017, representatives of TsKIB SOO talked about the fact that customers of not only the Russian Ministry of Defense, but also the Russian Guard, the Ministry of Internal Affairs and the FSB show interest in the product from Tula. And in 2018, Yuri Amelin, a representative of TsKIB SOO, told RIA Novosti reporters that the company, which was preparing for the start of mass production of the ADF, also received permission to export a new model of small arms.

Unique features of the ADF machine

The two-medium special assault rifle is a universal automatic weapon with high efficiency that allows the shooter to confidently fight the enemy not only on land but also under water, where the cartridges of ordinary small arms become useless. The ADF is a truly unique development, which is sometimes rightly compared to the weapons that came down to us from the pages of science fiction.

For the first time, the ADS gives the shooter the opportunity to confidently hit targets both on land using a wide range of standard automatic rifle cartridges of 5,45x39 mm caliber, as well as 40-mm caliber grenade shots, and underwater, where the machine is used to combat enemy saboteurs and combat swimmers. For firing under water, special ammunition is used that have the same caliber. In order to fight in suitable conditions, the shooter only needs to change the store. Such a successful combination of a full-time and special assault rifle in one model is very important, as it allows combat swimmers to almost halve the weight of their weapons.

A feature of the ADS model is the bullpup layout, which made it possible to make the weapon more compact. At the same time, the reduction in the length of the weapon did not occur to the detriment of the length of the barrel and while maintaining the high combat characteristics of the model. The machine received a closed box, which should increase the reliability of the ADF in difficult conditions. Composite materials used in the manufacture of weapons have a positive effect on the weight of the model, while at the same time increasing the corrosion resistance of the machine. Also, the machine is equipped with a universal mounting plate of the Picatinny type, which allows you to install various models of sighting devices on the ADF. In addition, the two-medium automatic can be equipped with a device for silent shooting or with a special nozzle for idle shooting.

A lot of interesting solutions were implemented in the ADF, including new ones for serial Russian small arms. For example, it is on a two-medium machine that the ejection of spent cartridges is carried out not sideways, but forward with the box closed. Such a solution simultaneously reduces the gas contamination of the shooter's face and allows the use of the machine by right-handed and left-handed people. The ADF is equally suitable for shooting from the right or left shoulder, for this the shooter does not need to rearrange any details on the weapon.

A distinctive feature of the Russian ADF is the grenade launcher integrated into the design of the weapon, designed to use VOG-25 shellless grenades and their modifications. Such a solution significantly increases the fire capabilities of the machine, and therefore the shooter himself, providing the fighter with an additional set of tools for solving various tasks on the battlefield.

The machine gun has two main modes of firing: single shots and automatic fire. The rate of fire reaches 700 rounds per minute (when firing on land). For firing from the automatic submachine gun, ordinary cartridges for AK submachine guns of 5,45x39 mm caliber and specialized ammunition for firing under water can be used: 5,45x39 PSP and PSP-UD. Magazine capacity - 30 rounds. Also, along with weapons, 40-mm VOG-25 grenade launchers and their various modifications can be used. The aiming range of the ADF on land is up to 600 meters, from a grenade launcher - 400 meters. Under water, the target can be confidently hit at a distance of up to 25 meters at a depth of five meters, with increasing depth, this value decreases.

The weight of the weapon is 4,82 kg without a sight, this value is given on the website of the holding "High-precision complexes." Moreover, the ADF has the following geometric dimensions: the length of the special machine is 685 mm, the width is 60 mm, the height is 302 mm. The barrel length of the machine is 418 mm. According to this indicator, the weapon is in no way inferior to the AK-74M assault rifle, the barrel length of which is 415 mm. At the same time, the ADF is much more compact due to the bullpup layout (for comparison: the length of the AK-74M with the buttstock unfolded is 940 mm). 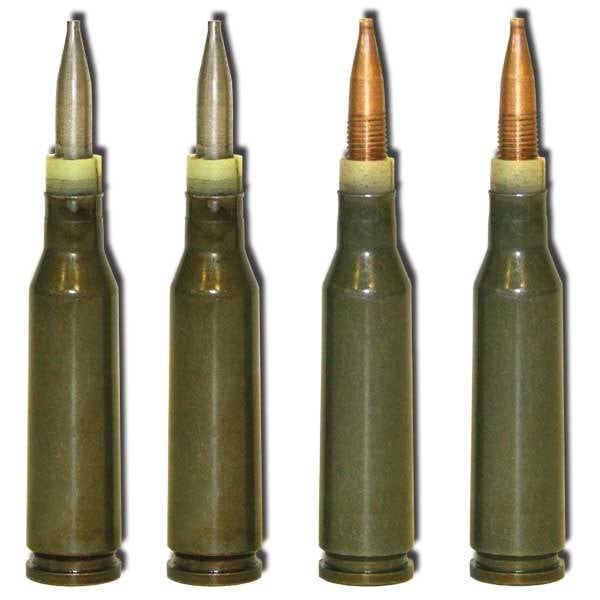 Underwater ammunition cartridges
On land along with weapons, standard cartridges for an AK-74M assault rifle of 5,45x39 mm caliber (7N6, 7N10, 7N22) can be used, but special ammunition of the same caliber was created by designers of TsKIB SOO for firing from a weapon under water. The main one is the PSP cartridge, which is designed to defeat enemy combat swimmers when firing from the ADF in underwater position. In addition to it, there is also a cartridge for combat training use - PSP-UD. The latter is different in that it can also be used to solve combat missions, although with restrictions on the range of destruction of underwater targets.

Both cartridges are equipped with a standard steel sleeve of a 5,45 mm submachine gun cartridge, but received a different bullet and improved gunpowder. The bullet itself for a live cartridge is made of tungsten, for a combat trainer - of bronze. Outwardly, it is a spherical longer bullet of variable diameter, having a top in the shape of a truncated cone (cavitator) and a conical bottom. This bullet shape provides a cavitation cavity to minimize water resistance. This is important, since conventional ammunition is not able to overcome three meters of distance under water.

We are in Yandex Zen
Scuba weapon goes into series
Dvukhsredny friend spetsnaz
27 comments
Information
Dear reader, to leave comments on the publication, you must to register.