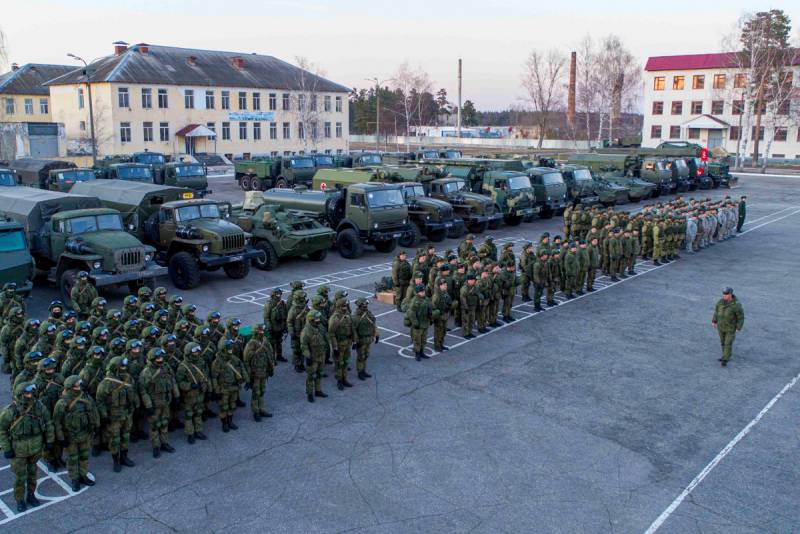 Parts and subdivisions of the RKhBZ are organizationally related to ground forces. At the moment, the bulk of the RKhBZ troops consists of 5 separate brigades and 12 regiments, deployed in different parts of the country. The troops also have their own scientific and educational organizations, storage bases, etc. The troops serve more than 20 thousand people and there are thousands of units of various equipment.

A wide range of diverse material parts, from self-propelled systems to hand-held devices for various purposes, consists of supplying the RKhBZ troops. First of all, these are several types of RBM reconnaissance vehicles capable of exploring the area, detecting threats and collecting samples. Numerous mobile laboratories for various purposes have been developed and implemented. For the processing of terrain, equipment and people are responsible for the calculation of degassing means - various self-propelled machines with special equipment. 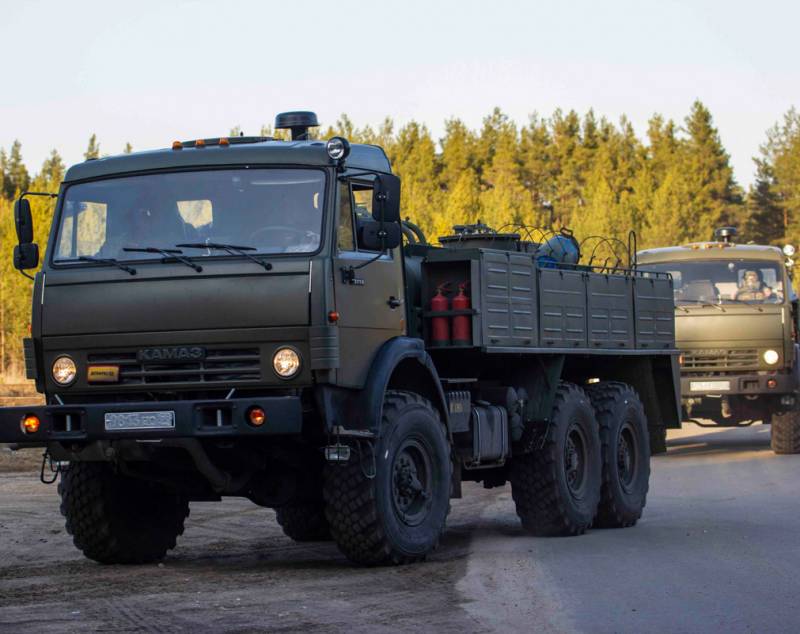 Photo: ZVO press service
It should be noted that in the composition of the RKhBZ troops there are also firearms. Hand-held flamethrowers, flamethrower fighting vehicles and self-propelled heavy flamethrower systems are used. Thus, troops can perform a wide range of tasks, depending on the situations that arise.

Parts of the Russian Republican Chemical Chemistry Base from different regions regularly participate in military exercises and humanitarian operations. So, last year, military chemists from several regions had to help in the aftermath of the floods. Their work allowed to reduce risks for the population and prevent dangerous scenarios.

Since the beginning of July 2019, the RKhBZ units of the Central Military District worked in the Irkutsk Region, where several settlements were flooded. For several weeks of work, experts took and studied hundreds of samples of water and soil to identify dangerous pathogens. In parallel, measures were taken to disinfect the area using various types of equipment and machinery. Both automobile filling stations and portable sprayers were used. 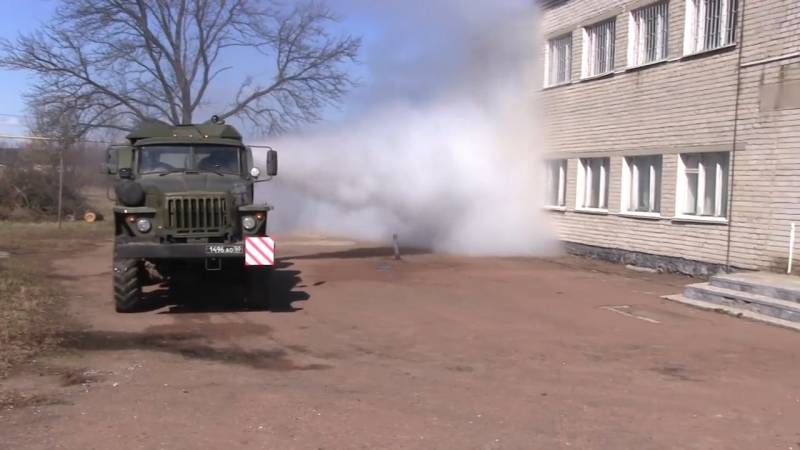 By mid-August, the RKhBZ troops disinfected a centralized water supply system, boiler houses, 15 educational institutions and other socially significant facilities. In total, over 5-6 weeks, the troops processed more than 150 thousand square meters. m of territories and premises. All these measures prevented the possible spread of dangerous infections and prevented the onset of epidemics.

In the autumn of last year, parts of the RCBB of the Eastern Military District were involved in a similar operation; they had to work in the flood zone of the Jewish Autonomous Region. For a month, military chemists processed a large number of social facilities, as well as approx. 1 thousand households in 27 settlements. The work was completed before the start of the frost.

Troops against the epidemic

In recent years, the activities of the RCHBZ forces in natural disasters have been aimed at preventing the spread of infections. Recently, the troops got the opportunity to work out their actions in a real epidemic. A few days ago, a group of Russian troops was deployed in Italy to help local doctors. 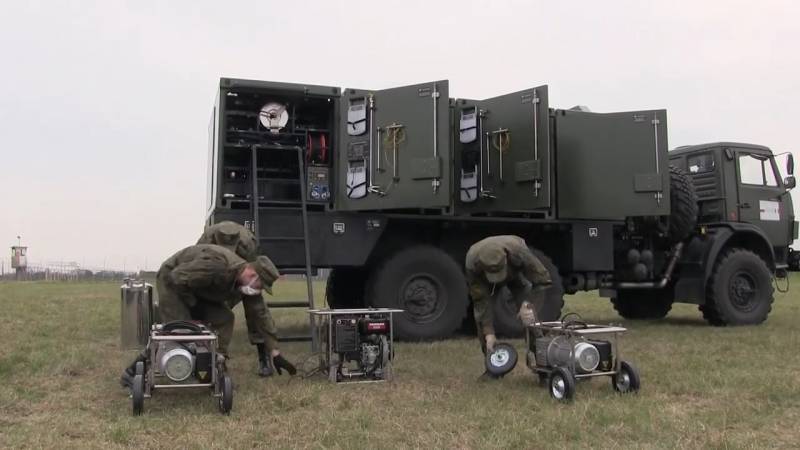 Photo: TASS / Ministry of Defense of the Russian Federation
Out of 1 biological laboratories of the troops, dozens of vehicles for various purposes and 15 specialists went abroad. Chemists, biologists, virologists and doctors arrived in the most affected region of Italy, where they started work.

It is reported that Russian experts took on a number of important tasks and partially unloaded the Italian colleagues. The Russian biological laboratory performs the necessary tests and analyzes to detect new infections with coronavirus and other infections. Medical and nursing teams provide care for patients in several medical facilities.

Disinfection of the area and premises has been launched. Various chemists use military chemists to process hospitals and socially significant objects, streets, etc. It is reported that filling stations, degassing machines and other equipment shipped to Italy, can handle up to 20 thousand square meters. m of surfaces per hour. This, in particular, is equivalent to 360 cars. 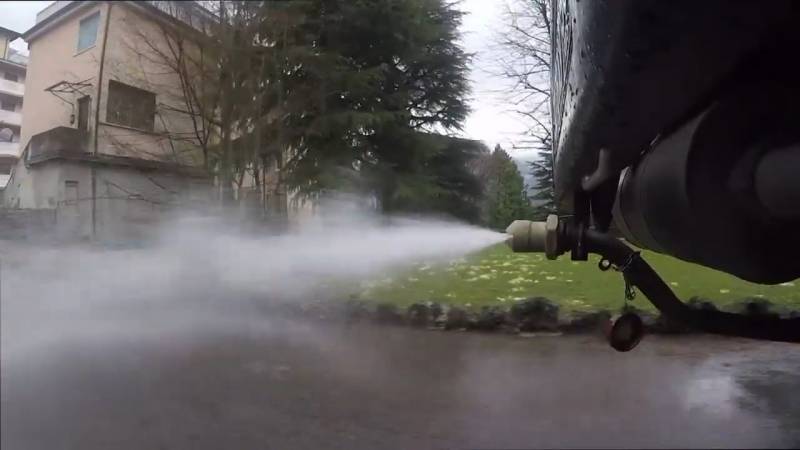 Mixtures recommended by the World Health Organization are used for surface treatment. Specialists of RCHBZ independently prepare the necessary fluids using recipes used by Italian colleagues. Such chlorine-containing mixtures are guaranteed to destroy the vast majority of bacteria and viruses, including the culprit of the pandemic - COVID-19.

Russian specialists work in 65 medical and social institutions in the city of Bergamo and the nearest settlements. These organizations faced the problem of a lack of qualified personnel. In addition, Italy lacks some models of machinery and equipment. Thus, ARS-14KM filling stations used in disinfecting the area make a big contribution to current events.

In recent years, RCHBZ units have regularly participated in humanitarian operations in different regions of our country. A few days ago they had to go abroad to help doctors and residents of another state. The results of the current Italian operation have not yet been determined, but there are reasons for optimistic assessments and for positive conclusions. 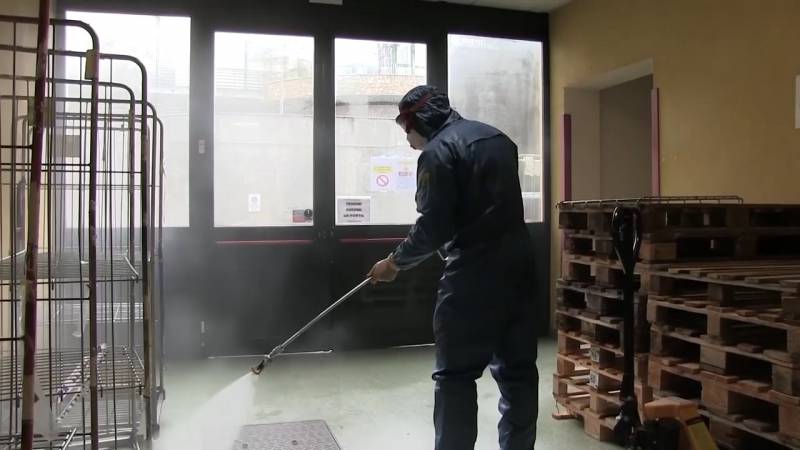 Participation in the aftermath of the disaster, as in the past year, allows us to solve several problems. Specialists of the RCHBZ provide support to other services and structures, test their skills in real conditions, and also provide real assistance to the affected population. All this allows you to complete work faster and prevent negative developments.

In recent years, RKhBZ military personnel have been sent to foreign countries several times to work in epidemics. Now the same operation is being carried out in Italy. Due to this, military chemists and biologists can monitor the situation directly on the spot and receive all relevant information as quickly as possible.

There is also a check of existing methods and solutions in real conditions and experience is being developed. Based on the results of the current deployment, conclusions will be drawn that can affect the further development of the RKhBZ troops and their working methods. 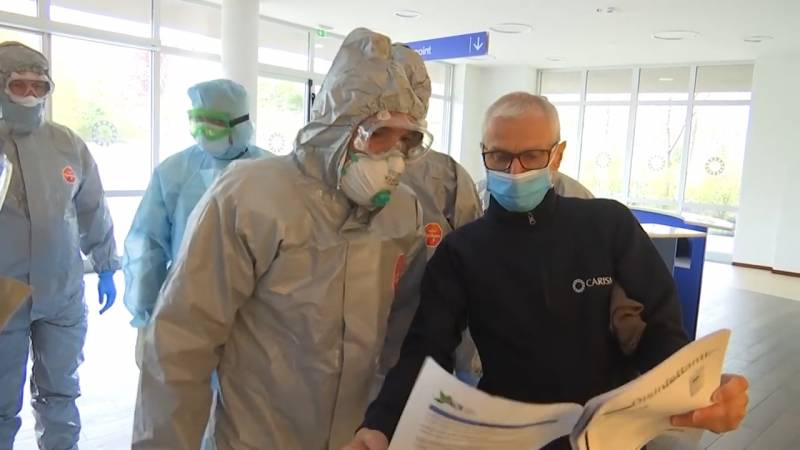 Photo: © JSC "TV Center"
In the event of new emergencies of an epidemiological nature, the troops of radiation, chemical and biological protection will be ready to act in difficult conditions and will be able to use modern equipment and techniques. All this can be used both in our country and to help other nations.

The RKhBZ troops have several main tasks, and one of them is to help and strengthen the medical service. With the help of special tools and systems, they can identify and timely suppress possible foci of infection or fight existing outbreaks. Moreover, such tasks are solved in any areas, quickly and in significant volumes.

Right now, specialists from Russian RCHBZ troops are working in a foreign country that has been hit hardest by the coronavirus pandemic. At the same time, with the help of Italian doctors, they collect the necessary information and gain experience in working in a large epidemic in case of new similar situations. How soon this experience will be needed is unknown, but it cannot be underestimated.