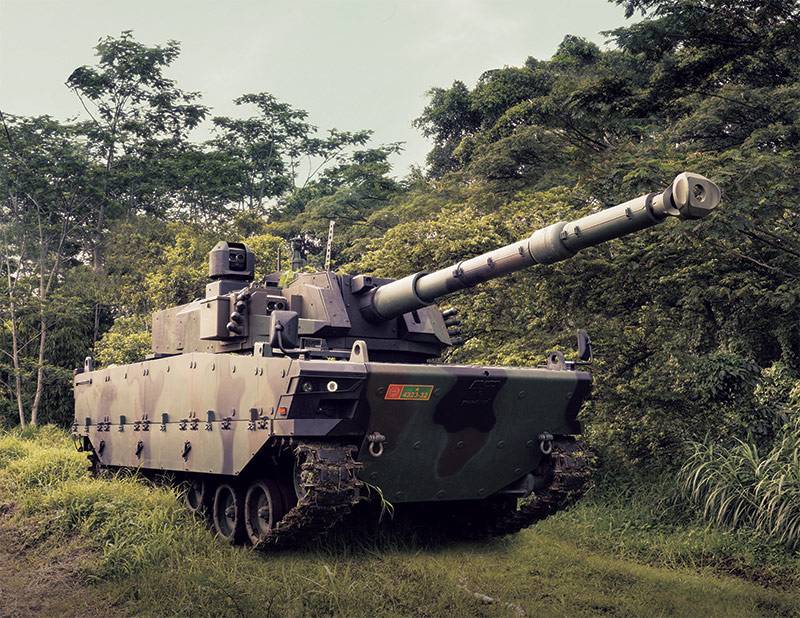 In May 2015, Turkey and Indonesia signed an agreement on the joint development of a promising secondary tank Modern Medium Weight Tank (MMWT). Over the next few years, FNSS and PT Pindad prepared design documentation, built and tested experimental equipment, and organized serial production. The first production tanks of the new model were recently transferred to the Turkish army. In the near future, deliveries will continue, and Indonesia will receive its equipment.

According to the test results ...

Recall that the Turkish-Indonesian agreement appeared in the spring of 2015, and in the fall of 2016, the development companies first showed the layout of the future tank. In May 2017, a full-fledged prototype was demonstrated. Soon, the car was sent for tests that lasted more than a year.

In September 2018, FNSS announced the completion of major inspections. In particular, the tank confirmed full compliance with the requirements of the Indonesian army. In the near future, the signing of a contract for the assembly of the first production batch was expected. New orders were to follow.

In May 2019, the development companies signed an additional agreement on the mass production of MMWT. It stipulated the procedure for the production of individual components and assembly of equipment in two countries. According to foreign media reports, one of the main topics of the agreement was the transfer of a number of technologies to the Indonesian company PT Pindad. 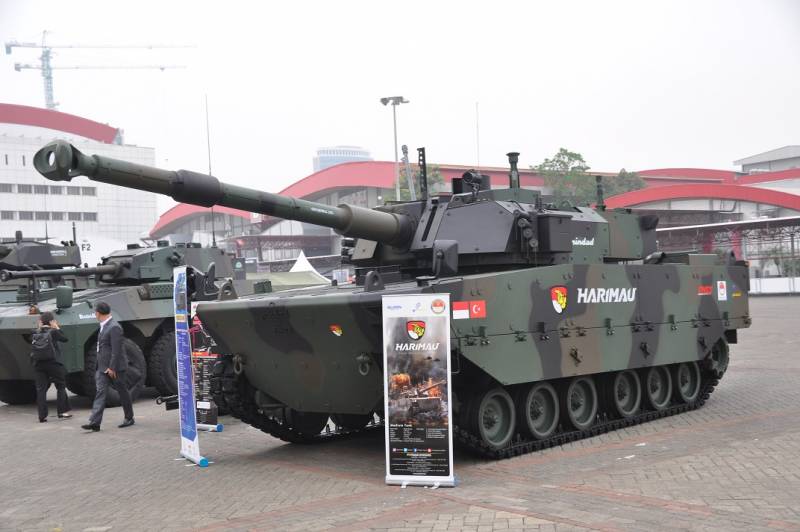 The first Indonesian Harimau. Photo Bmpd.livejournal.com
At that time, the first contract with the Ministry of Defense of Indonesia was still missing. It was estimated that the army would order up to 20 tanks totaling $ 135 million. Later, an official order for 18 cars appeared. Deliveries of this equipment are planned for 2020-21.

Last year, a contract for the production of tanks for the Turkish army also appeared. The pre-production and first production armored vehicles were required to be transferred to the customer in 2019-2020. The appearance of new orders for large quantities of equipment.

Under the terms of the agreement on development and production, the release of new equipment will be carried out in two countries. MMWT tanks for Turkey should be assembled by FNSS. They will be adopted by the name of Kaplan (tour. "Tiger"). The PT Pindad plant will supply the equipment of the Indonesian army accordingly. These tanks received the name Harimau ("Tiger" in Indonesian).

In December 2019, FNSS transferred a pre-production batch of two Kaplan tanks to the Turkish army. In early February 2020, FNSS announced the start of mass production and the early delivery of vehicles to the troops. On March 23, the military department announced the receipt of the first production batch of six tanks. In the near future, the army will receive several more "Kaplan". Then work will begin on new contracts. The general requirements of the Turkish army for the number of medium tanks have not yet been specified. 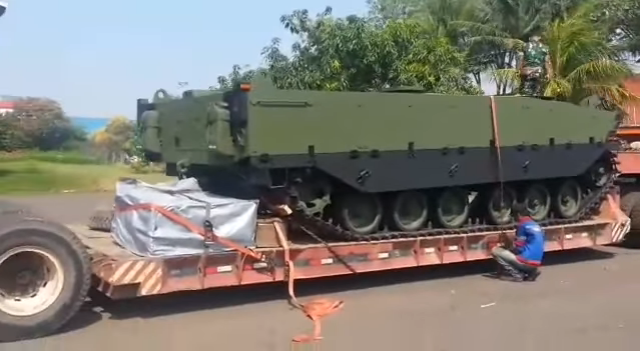 Chassis MMWT assembly PT Pindad. Photo Defense-studies.blogspot.сom
The existing Indonesian contract provides for the delivery of 18 serial Harimau production tanks of local assembly. According to news In recent months, PT Pindad has already begun to fulfill this order, but the equipment is not yet ready for transfer to the troops. The first tanks will be delivered in 2020, and the delivery of the second batch is scheduled for the 2021st.

At different stages of development and preparation for production, it was claimed that Turkey and Indonesia could order a total of 200 to 400 medium tanks MMWT / Kaplan / Harimau. The exact number of equipment required has not yet been called, and it is entirely possible that it has not yet been determined.

The total volume of orders of the two countries will depend both on their desires and plans, and on economic opportunities. Turkey and Indonesia are faced with certain problems, because of which they can not acquire all the desired military equipment in any quantities. Actual production volumes will become clear only in the future. In the meantime, it is only about dozens of cars.

The MMWT project was developed based on the requirements of the Indonesian and Turkish army, but it took into account the possibility of future export deliveries. During past exhibitions, representatives of foreign armies studied the new tank and gave it their ratings. In one form or another, several countries showed interest in the car. In the future, this may lead to the emergence of new contracts. 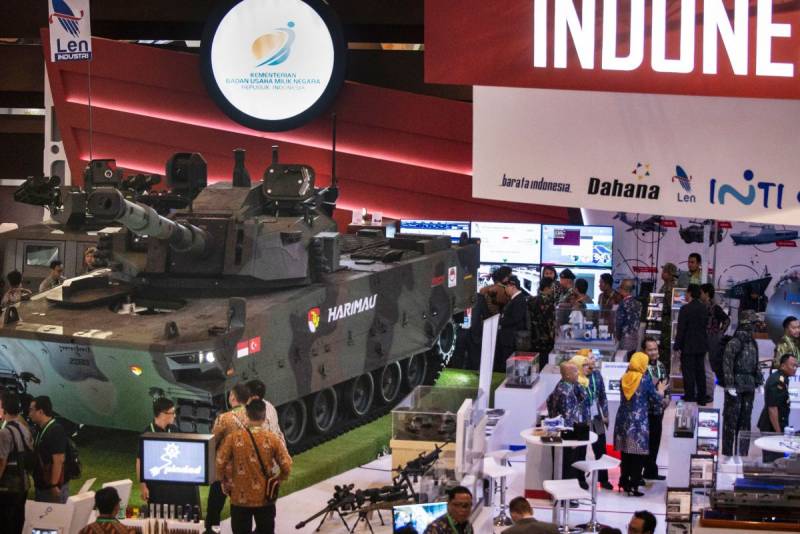 Harimau at one of the exhibitions. Photo Mediaindonesia.com
In the fall of 2018, after testing was completed, Bangladesh and the Philippines expressed their interest in the MMWT. Then Brunei became interested in the machine. A year after this, in the fall of 2019, the Ghanaian army entered the circle of potential customers. It is possible that news about the launch of mass production will attract the attention of other countries wishing to update their armored fleet.

However, while the MMWT tanks were ordered only by the armies that had previously initiated their development. There are no other contracts, and negotiations with third countries are not reported. Thus, the real export prospects of Kaplan / Harimau remain uncertain. Interest in technology is present, but so far does not go into the plane of real orders.

Apparently, such a development of events is due to several factors. First of all, customers can be scared off by the high price of equipment. MMWT costs more than $ 6-6,5 million - too much for developing countries. In addition, several similar medium tanks are already available on the international market, and the customer has a choice. At the same time, there are not too many potential buyers, which enhances competition.

Turkish-Indonesian vehicle MMWT belongs to the conventional class of modern medium tanks. This is a medium-weight vehicle (no more than 32-35 tons) with a limited level of protection, high mobility and the maximum possible firepower. This technique is now being considered as an alternative to the main tanks, adapted to the conditions of low-intensity conflicts. 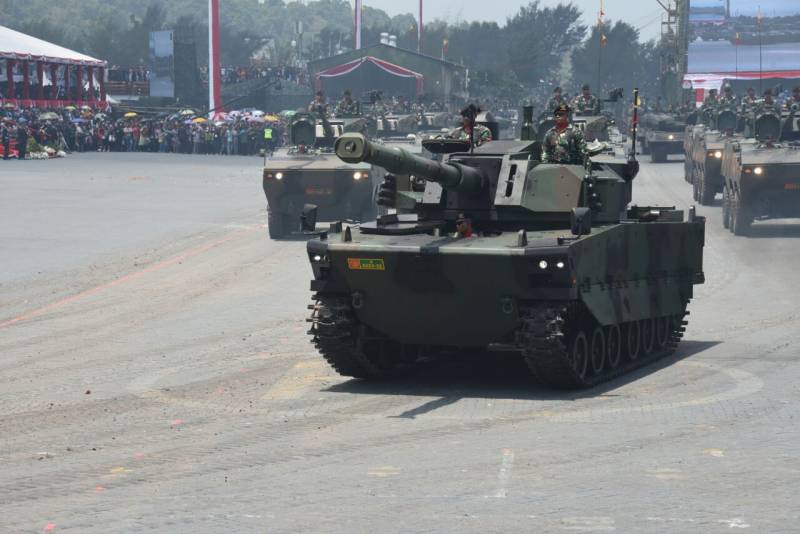 Experienced Indonesian tank at the parade. Photo PT Pindad / pindad.com
The Tiger of joint development was implemented using the solutions of previous Turkish projects. This is a machine with bulletproof armor (level 4 according to STANAG 4569) and the ability to install level 5 protection. Mine protection of the same levels is provided.

High mobility is provided by the 711-horsepower Caterpillar C13 diesel engine, automatic transmission and tracked undercarriage with torsion bar suspension. The maximum speed on the highway is 78 km / h, the range is 450 km.

The turret of the MMWT is equipped with a 105 mm Cockerill CT-CV 105HP high-pressure smoothbore gun with automatic loader. All 105 mm unitary shots that comply with NATO standards are allowed. Applied modern digital SLA with the ability to search and defeat targets day and night. Declared implementation of the hunter-killer principle. The gun is complemented by a coaxial machine gun.

Installation of an anti-tank missile system is planned. The first production Kaplans for Turkey are equipped with the Russian Kornet-E ATGM. In the future, it is planned to use the Turkish OMTAS complex. Harimau tanks for the Indonesian army should receive similar weapons. 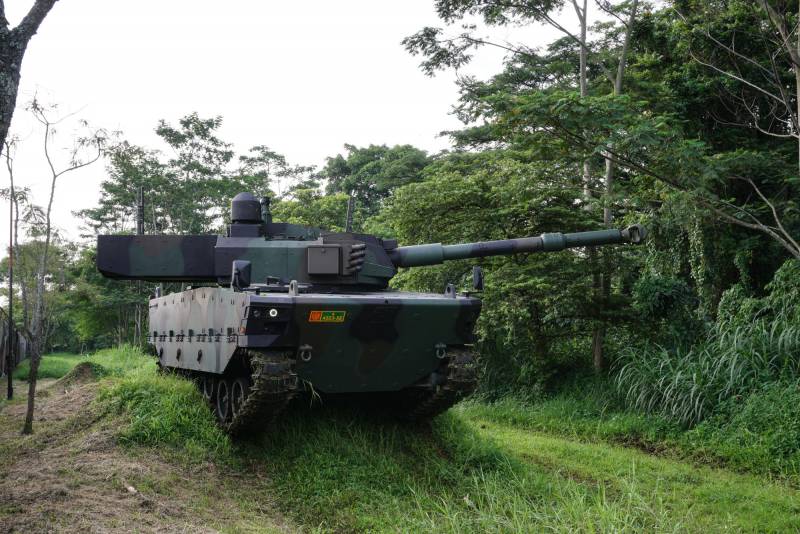 Experienced Turkish Kaplan. Photo FNSS / fnss.com.tr
The crew of three people has a system of all-round visibility, its safety is ensured by the collective defense system against WMD. Declared automation of a number of processes, reducing the load on tankers.

On the battlefield, the MMWT tank must fight manpower, unprotected and lightly armored vehicles, as well as various structures. The ability to destroy medium and main tanks of obsolete models is provided. The potential to combat modern MBTs is very limited, however, such combat situations are not provided for by the basic concept.

At the moment, the MMWT program can boast of notable successes, although not everything is going perfectly. Serial production of equipment for both developing countries has begun, and one of them has already received and is developing the first tanks. Another will begin updating the park only by the end of this year. Export prospects remain uncertain.

Turkey and Indonesia have already received the main result of the joint project. Tanks go to the army and increase their readiness for modern threats and challenges. Expected successes in the international market will be a pleasant addition to your own re-equipment.

We are in Yandex Zen
Medium tank Harimau. Foreign units for the Indonesian army
Medium tank Medium Tank Mark D (UK)
72 comments
Information
Dear reader, to leave comments on the publication, you must to register.