US Navy against the virus. Mercy type hospital ships go to the rescue 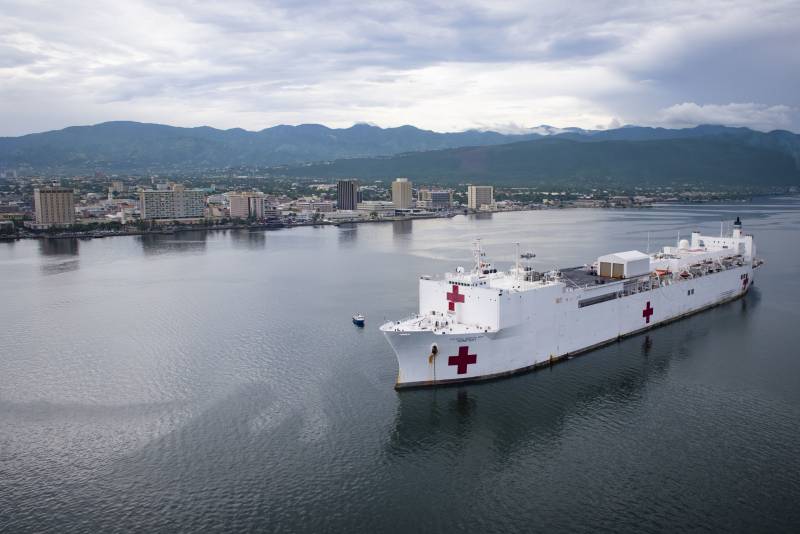 The United States Navy has two hospital vessels - USNS Mercy (T-AH-19) and USNS Comfort (T-AH-20) of the Mercy project (Mercy). They are capable of performing tasks of a sanitary and medical nature in situations of armed conflict or as part of humanitarian operations. The other day, it was decided to use these vessels in the fight against the ongoing epidemic of COVID-19.

On March 17, Secretary of Defense Mark Esper announced the imminent deployment of hospital ships in US ports. He spoke about the beginning of the preparation of courts for the transition to the place of future work. The minister also revealed some features of the future deployment, the specifics and limitations of such activities.

The next day, New York State Governor Andrew Cuomo announced that the USNS Comfort (T-AH-20) would soon arrive in New York Bay and join the fight against the current epidemic. The governor noted that a vessel with special potential will significantly improve the capabilities of local medicine. 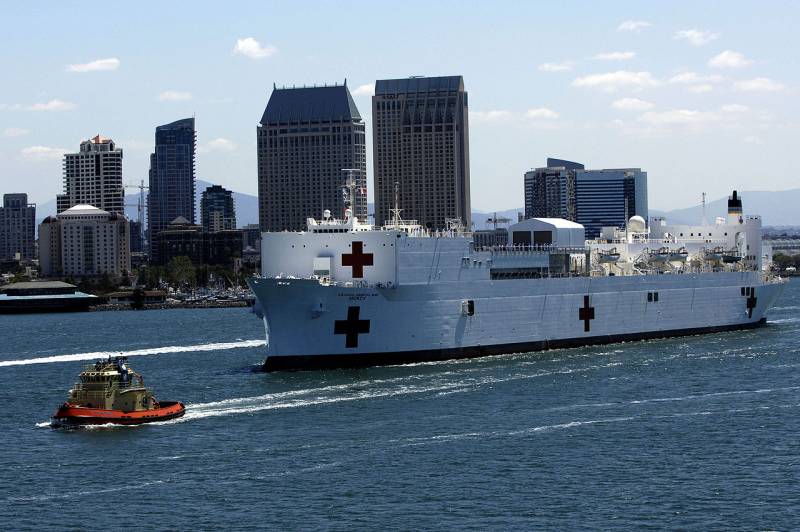 USNS Mercy Floating Hospital San Diego, April 2006
On the same day, US President Donald Trump confirmed information about the imminent departure of a hospital ship to New York. According to him, the transition to the duty station will begin next week. A few days after this, "Comfort" will be able to receive the first patients and help the "land" doctors.

Soon, command plans for the USNS Mercy (T-AH-19) became known. The Minister of Defense indicated that he would be sent to one of the ports on the West Coast. The beginning of work in a new place is referred to the end of the month. However, the exact date and place of deployment has not yet been determined. This question is likely to be clarified over the next few days.

According to US media, the order of the president or defense minister is not enough to transfer hospital courts to new duty stations. Before going to deployment, various activities and procedures that take some time are required. In addition, with all its advantages, Mercy-class vessels have certain restrictions on activities. 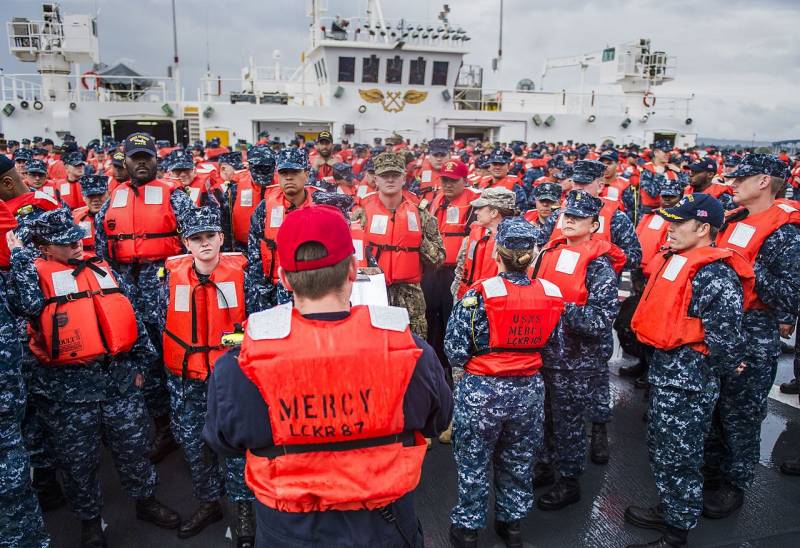 Mercy crew during training events, May 2016
According to USNI News, the crews of the two vessels have already begun preparations for going to sea. Being in the port, the ship is in a state of reduced readiness; go to sea should be in full. In the absence of difficulties, preparing for the campaign and achieving the desired readiness takes approx. 5 days. After that, sending to the place of service is possible.

According to M. Esper, there are certain problems with the staff. To achieve full readiness of the court, it is necessary to understaff medical personnel who are attracted from civilian institutions or from the reserve. The Minister of Defense noted that he would not like to restore the readiness of floating hospitals by worsening the situation in conventional hospitals.

Another problem is the specialization of hospital courts. Due to their military purpose, they have developed capabilities for dealing with a variety of injuries. The vessel's capacity to fight infection is limited. It is expected that the Comfort crew will take on the usual tasks and unload the staff of conventional hospitals, which will continue to treat infectious diseases. 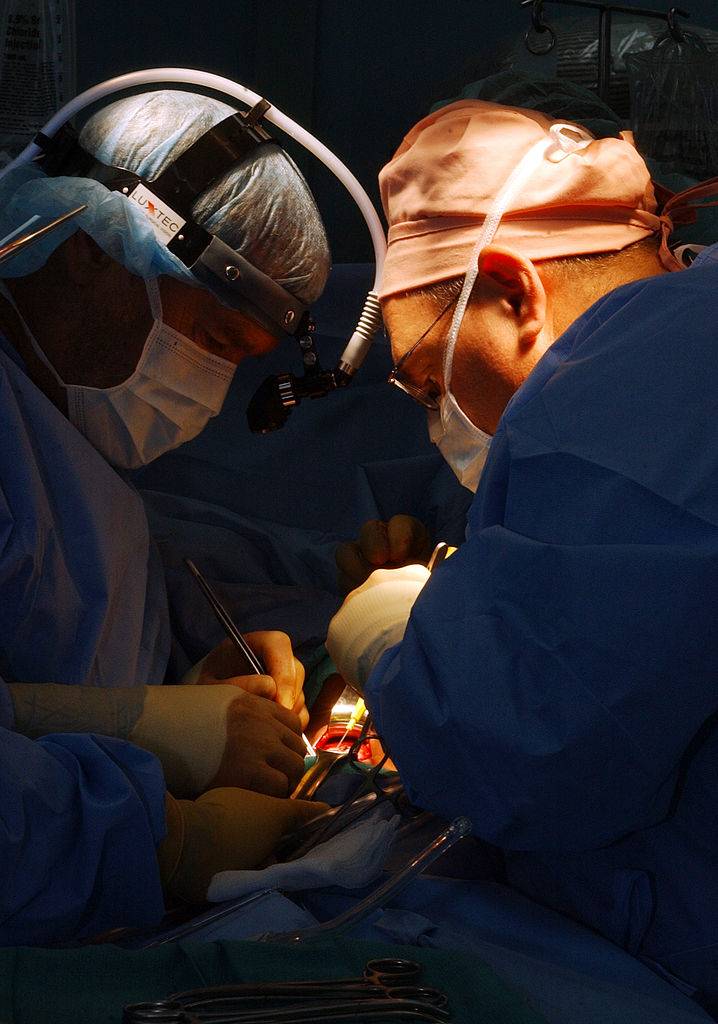 There are several operating rooms on board
Hospital ships are now preparing for deployment and will be able to go to duty stations no earlier than March 20. The transition and placement in a new place will take a few more days. There are some concerns about this. While New York and the unnamed West Coast city are waiting for the arrival of USNS Mercy (T-AH-19) and USNS Comfort (T-AH-20), the epidemiological situation may change significantly.

It is obvious that the positive effect of the presence and operation of the hospital ship will not manifest itself immediately. This can take days or weeks, depending on the circumstances, the efforts of doctors and other factors. It should be borne in mind that in the context of the fight against the new virus, hospital ships will only perform auxiliary functions.

The last of the challenges of future deployment is extremely limited quantitative capabilities. The US Navy has only two hospital ships, and therefore doctors from only two cities can count on the support of the military. The issue of hospital modernization fleet appeared a long time ago, but has not yet been resolved. Now the command can familiarize and evaluate the consequences of this. 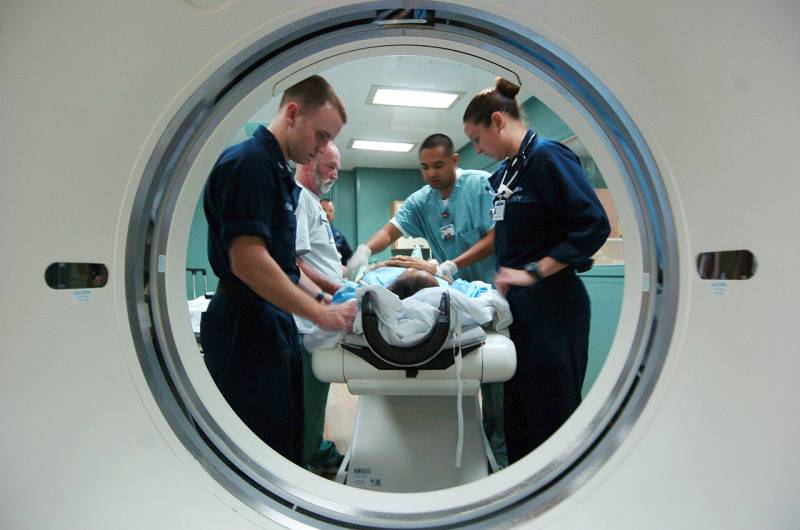 The diagnostic department has two tomographs

Hospitals on the water

The future hospital ships Mercy and Comfort of the US Navy were laid down in 1974-75. and were originally built as tankers of the San Clemente project. Later, the construction goals changed, and fundamentally different equipment was installed on the hulls of the tankers. The first vessel USNS Mercy (T-AH-19) entered service in 1986, the second USNS Comfort (T-AH-20) a year later. The emergence of two new units made it possible to withdraw from the fleet the remaining Heaven-type vessels that have been in operation since World War II.

The USNS Mercy is based in San Diego and has Pacific and Indian Oceans. USNS Comfort operates in Norfolk, on the shores of the Atlantic Ocean, with an appropriate area of ​​responsibility.

Mercy type vessels have a length of 272 m with a width of 32 m and a draft of 10 m. Displacement is 65-70 thousand tons. A twin-shaft steam turbine power plant with a capacity of 24,5 thousand hp is used, with which the vessel reaches a speed of 17 knots . The internal volumes of the hull and low superstructure accommodate premises for various purposes. On the roof of the superstructure there is a helipad. 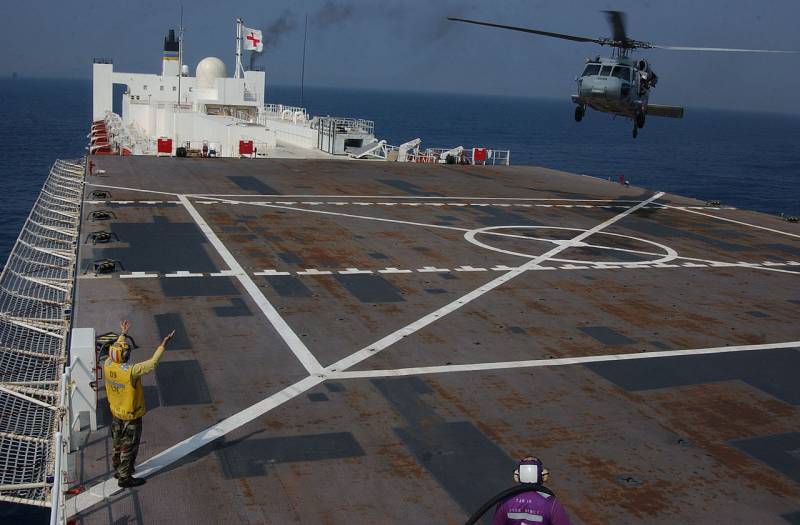 The main volumes of the building and superstructure are given for the placement of chambers for various purposes with a total capacity of 1000 beds. 15 departments work, including a reception room, a laboratory, an operating unit, etc. The vessel has its own blood bank, two oxygen production facilities, a sterilization center, a morgue and a waste disposal department. In fact, every Mercy-type vessel in its functions corresponds to a full-fledged hospital.

In a state of reduced readiness, the crew of the vessel includes 70 people - 58 military personnel and 12 civilian specialists. The full staff of the ship is 61 civilians and 1214 military personnel. According to the standards, 5 days are given for the transition from one state to another.

Since entering service, Mercy-type vessels have repeatedly participated in military and humanitarian operations. For example, the ship "Comfort" has already worked in New York. After the attacks of 2001, it arrived in the city to strengthen local medical facilities. However, most often ships were involved abroad, mainly in the form of humanitarian assistance. 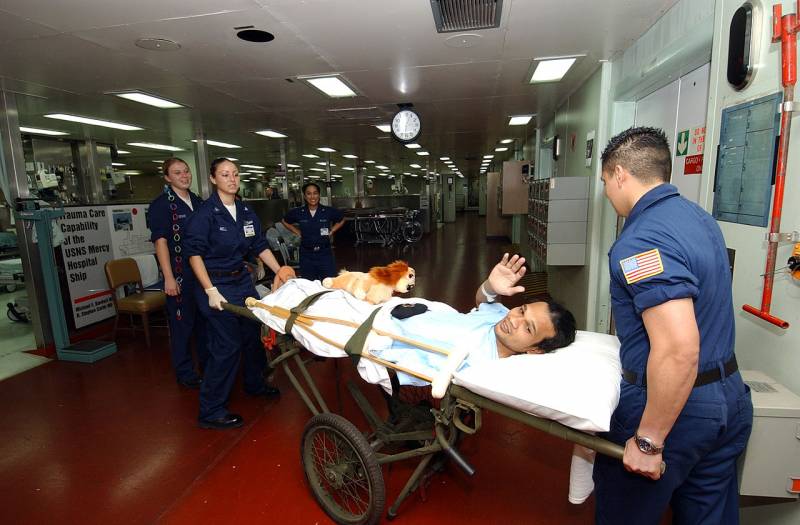 It should be noted that over the past years, USNS Mercy (T-AH-19) and USNS Comfort (T-AH-20) have been regularly criticized. They are distinguished by a sufficiently large age and low technical characteristics. Part of the airborne equipment is outdated, and there are also a number of other problems of various kinds. In this regard, from the beginning of the XNUMXs, the topic of creating new hospital courts has been regularly raised, but no real results have yet been obtained.

Fleet against the virus

Despite moral and physical obsolescence, two hospital ships of the Mercy type continue to serve as part of the US Navy and regularly participate in various events, mainly of a humanitarian nature. The next mission of this kind will start in a few days, and it will probably involve both ships.

Tasks for Comfort have already been identified - the ship will leave for New York to help local doctors. “Mercy” is also planned to be used in the fight against the current epidemic, but accurate data on it are not yet available. As a result, by early April, the entire US Navy medical fleet will be participating in the fight against COVID-19. How successful such a struggle will be - time will tell.

We are in Yandex Zen
EPF Expeditionary Transport Vessel (USA)
The night before Tsushima. Why did the hospital ships give out the location of the Russian squadron with lights?
31 comment
Information
Dear reader, to leave comments on the publication, you must to register.