For the convenience of students. Target Tank Zielfahrzeug 68 (Switzerland) 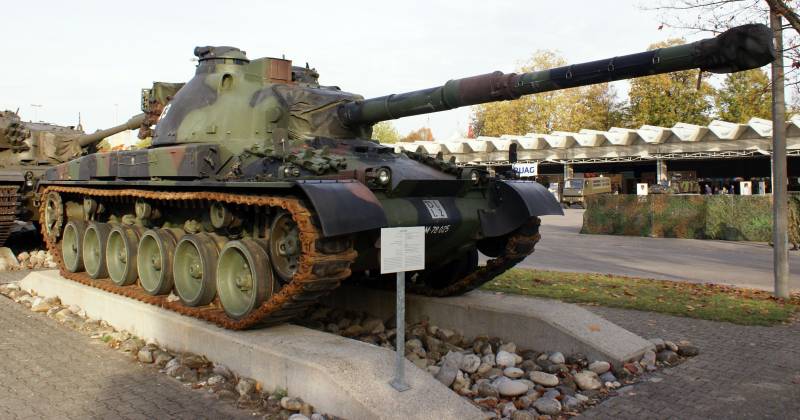 Pz 68 serial tank - the basis for the target machine

To train infantry personnel, firing ranges with various targets imitating various enemy targets and objects are needed. So, for training operators of anti-tank missile systems, targets in the form of tanksincluding movable. In the past, the Swiss army decided not to save on training soldiers, and the result was the appearance of a real target tank called Zielfahrzeug 68.

Special requirements
Switzerland was one of the first countries to set up early anti-tank systems. Development of such weapons dragged on, but the desired results were nevertheless obtained, after which the process of training operators began. For effective training of fighters, appropriate shooting ranges and targets were required. At first, the army did away with simple plywood targets in stationary or mobile equipment. However, such products did not resemble real armored vehicles.

In the early seventies there was a proposal to create a specialized target armored vehicle, capable of imitating the real tank of a conditional enemy as accurately as possible. By this time, the Swiss army had mastered the MOWAG Panzerattrappe target armored vehicles, and against such a background the new proposal looked viable.

The development of an unusual armored vehicle was entrusted to the tank building company Eidgenoessische Konstruktionswerkstaette (K + W Thun). A new special machine should be created on the basis of existing units. Outwardly, it was supposed to be like modern tanks, and also have similar mobility. It also had special requirements in terms of protection. The armor was supposed to protect the crew from anti-tank missiles with an inert warhead.

Tank based
The Panzer 68 serial tank was taken as the basis for the special target machine. In this regard, the new model was named Zielfahrzeug 68 (“Target Tank Sample 68”). In mass production, it was planned to use decommissioned combat tanks. 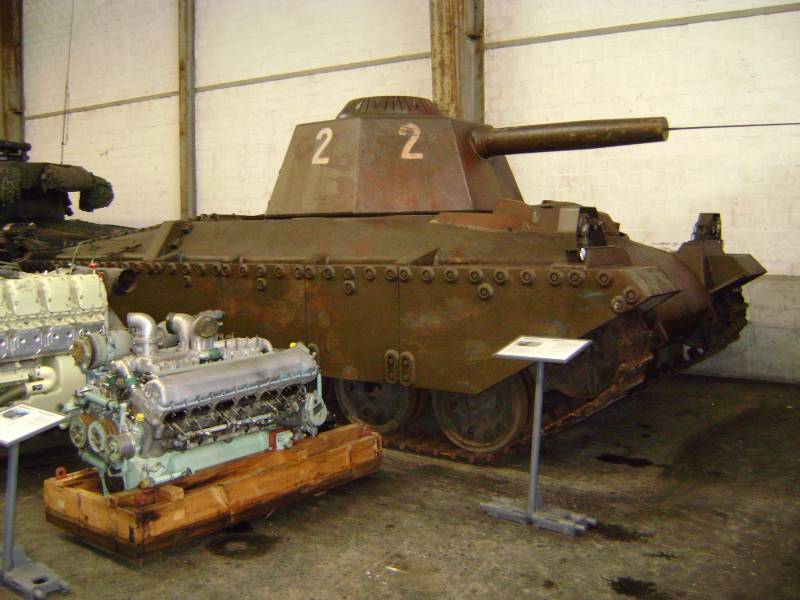 One of the surviving tanks Zielfahrzeug 68
The Zielfahrzeug 68 project included the dismantling of the tank turret along with the fighting compartment and all its equipment. Armament, ammunition, fire control equipment, etc. no longer required. Also, for reasons of economy, they dismantled the standard chassis for installing other units.

The regular cast armored corps with protivosnaryadnym armor frontal projection remained. Aft remained the MTU MB 837 Ba-500 diesel engine with a power of 600 hp. and an auxiliary power unit in the form of a 38-horsepower Mercedes Benz OM 636 engine. The transmission was not altered.

The chassis retained an independent suspension on Belleville springs, but it was equipped with rollers and tracks from the obsolete Pz 61 tank. The army stocks had a significant supply of such parts, which saved on the production and operation of a new armored car.

Measures were taken to improve the safety of the driver. An additional conical shield with vertical slots was placed above his hatch. A similar defense was present on the hatch of the tower. The guards covered the periscopes and protected them from being hit by a flying rocket or its fragments. 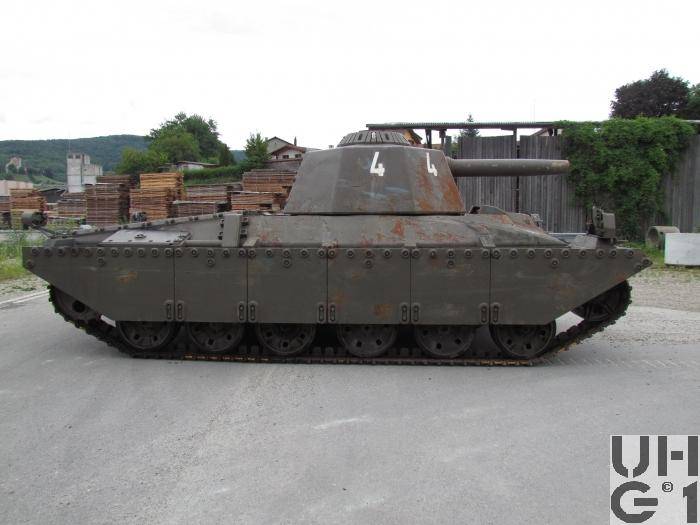 Another museum sample
Native lateral projection protection was insufficient for the safe firing of training missiles. For this reason, the Zielfahrzeug 68 has been equipped with new side screens. Armor plates of various shapes were attached to the fenders with bolts. If damaged, they could be quickly replaced. The protruding parts of the MTO roof received similar protection. The protection of the forehead of the hull, with the exception of the shield on the hatch, remained the same.

The crew of the "Target Tank" consisted of two people. The driver was located in the building, the commander in the tower. The compartments were connected to each other, which allowed to leave the car when one of the hatches was damaged. The crew had an intercom; the commander used the SE-412 to communicate with the leaders of the training event. For any obvious reason, no weapons were available.

Product Zielfahrzeug 68 in its dimensions was similar to the base Pz 68. Weight was reduced to 36 tons. Running characteristics remained at the same level. Speed ​​on the highway reached 55 km / h, on the terrain - 35 km / h. Due to this, the behavior of a real tank was imitated as accurately as possible.

The development of the Zielfahrzeug 68 project took a minimum of time, and already in 1972 the K + W Thun plant received an order for the serial production of new equipment. Special vehicles were not required in large quantities, and the army ordered only 10 units. For their production, the required number of decommissioned Pz 68 tanks was sent to the factory. 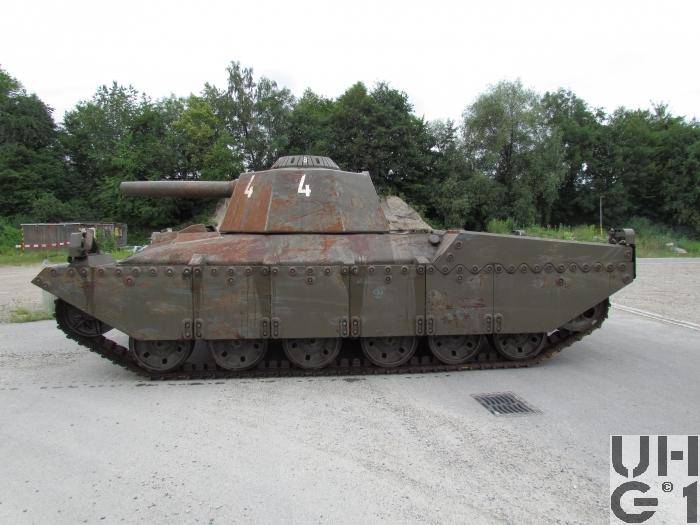 The first Zielfahrzeug 68 sample came out of the assembly shop in the same 1972. The tenth was made in 1974. All built cars received numbers from M77870 to M77879. They were transferred to several training grounds where infantry training was carried out, including ATGM operators.

Operation of unusual equipment was quite simple. During various exercises or firing, the crews moved along the target field and imitated conditional enemy tanks. The ATGM calculations performed target detection and fired.

The crew of the target tank included up to two people, but often only the driver was in the car. The Zielfahrzeug 68 was entrusted to both military tankers and civilian personnel. The requirements for the driver were lower than in the case of tanks, which simplified the organization of firing without loss of quality.

Preparation of calculations using self-propelled guided targets was more effective. Unlike other targets, a specialized tank could move along any route, in different directions, etc. Shooting for this purpose was not simple, but the operators received the necessary experience and acquired skills.

In training firing, only missiles with an inert warhead were used. Thus, a missile hit threatened the target tank only with the deformation of certain parts. In the event of serious damage, the armor or chassis element could be replaced with an affordable and cheap new one. The operation also became cheaper due to the maximum unification with the tanks available in the army.

35 years in the ranks

10 target tanks Zielfahrzeug 68 entered service in 1972-74. and became an important element of the training system for ground forces. Often, tanks were used together with the MOWAG Panzerattrappe armored cars and helped ATGM operators improve their skills.

Such operation of special tanks continued until 2007. For 35 years of use, these vehicles have exhausted their life and also accumulated a lot of minor breakdowns. In addition, by this time, the Pz 68 tanks were removed from service, which led to the unification of the fleet of military and special equipment. As a result, it was decided to remove the target tanks Zielfahrzeug 68 from the supply. Direct replacement for them was not created. It was now proposed to prepare calculations using other means.

After decommissioning, the equipment was sent for storage or disposal. Tanks with numbers M77876 and M77878 were transferred to museums. For example, the M77876 is on display at the Schweizerisches Militärmuseum Full (com. Full-Royal) along with other interesting examples of Swiss armored vehicles.

A special target armored vehicle Zielfahrzeug 68 was created as a solution to a specific but important task. This decision was unusual and unexpected, but at the same time effective. Using a special machine based on Pz 68, it was possible to provide training for several generations of ATGM operators. Just ten plain armored vehicles on the finished chassis made a significant contribution to the defense of Switzerland.

Ctrl Enter
Noticed a mistake Highlight text and press. Ctrl + Enter
We are
Is the "old" well forgotten to become the "new"? Part-2. At the call of honor and dutyThe fire control devices of the Soviet and German tanks of the Second World War. Myths and Reality
22 comments
Information
Dear reader, to leave comments on the publication, you must to register.