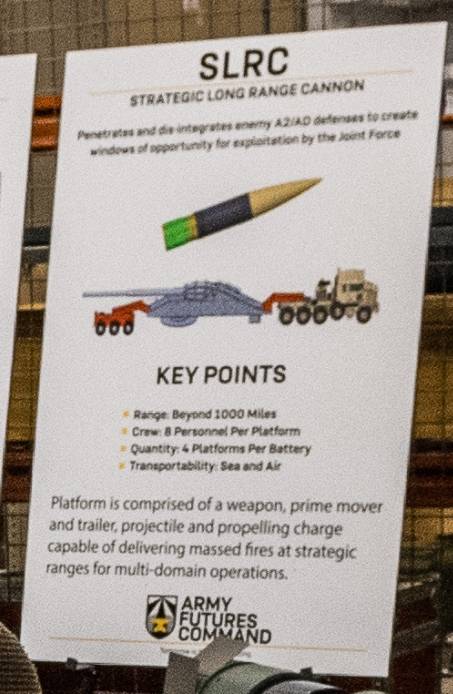 In the field of barrel artillery, a new revolution is planned. The U.S. Army launched a project for a promising artillery system capable of hitting targets at ranges of at least 1000 nautical miles (1852 km). A project called Strategic Long Range Cannon (SLRC) is now in its early stages, but its first results are promised already in 2023. In the meantime, developers announce some plans and show different materials.

The issue of deep modernization of rocket and barrel artillery has been worked out in the United States for a long time, but last year it became known that there were more than bold plans. In October 2019, the head of the artillery modernization program, Colonel John Rafferty, spoke about the promising SLRC program.

The colonel said that several Pentagon research organizations are currently working on finding the solutions needed to create an ultra-long-range gun. In the near future it is planned to create a prototype of such a product and test it at the test site. The first firing so far relates to 2023.

This will be a preliminary check, the results of which are going to determine the real prospects of the project. If the results are of interest to the army, the project will be developed and will lead to the emergence of a full-fledged combat-capable SLRC gun. However, confidence in this outcome is still lacking. In particular, it is not entirely clear whether it will be possible to keep the cost of the gun at an acceptable level.

February 20, 2020 at the Aberdeen Proving Ground a joint event of the US and UK armies US-UK Modernization Demonstration Event was held, dedicated to issues of mutual assistance and further development. During this event, a poster was presented with the main provisions of the SLRC project. Models of artillery systems, including unknown sample. Photographs of the poster and layout quickly became public. 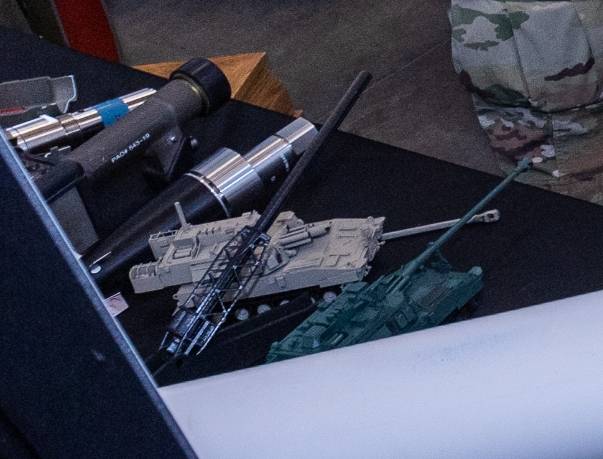 Models of artillery. In the center is an unknown weapon. Photo Twitter.com/lfx160219
The poster presents the main goals and objectives of the program, the expected characteristics and principles of operation, as well as an image of the entire system and its ammunition. The poster pretty much supplemented the existing data, although it did not reveal all the details.

The SLRC artillery complex is seen as a means of breaking through the defense of A2 / AD and breaking through "gaps" for further actions by the armed forces. A system is proposed that includes a tractor, a conveyor platform with a gun, a projectile and a propelling charge. The calculation of the gun will include 8 people. The guns are proposed to be reduced to batteries of 4 units. Range of fire - more than 1000 miles. It must be possible to transport by air or by sea.

The graphic on the poster shows a certain shell of standard contours with tail plumage. The drawn artillery complex combined a modern tractor and a large-caliber gun of the late XNUMXth century. Obviously, the SLRC project has not yet reached the stages when the appearance of the complex is known or can be shown even at a private event.

The model from the exhibition depicts an artillery system with a gun carriage without its own move. It has a barrel of obscure caliber, mounted using a farm. Any parameters of such a sample are unknown. It is also unclear whether this layout is related to the SLRC program.

The objective of the SLRC project is to create a mobile gun with a "strategic" firing range of at least 1850 km. For comparison, modern serial artillery has a range of not more than 40-45 km, depending on the projectile used. Systems with a range of 70-80 km or more are being developed, but they are still far from being adopted. You can also recall the legendary “Paris Cannon”, which hit 120-130 km, or the projects of J. Bull with an estimated range of 1000 km. 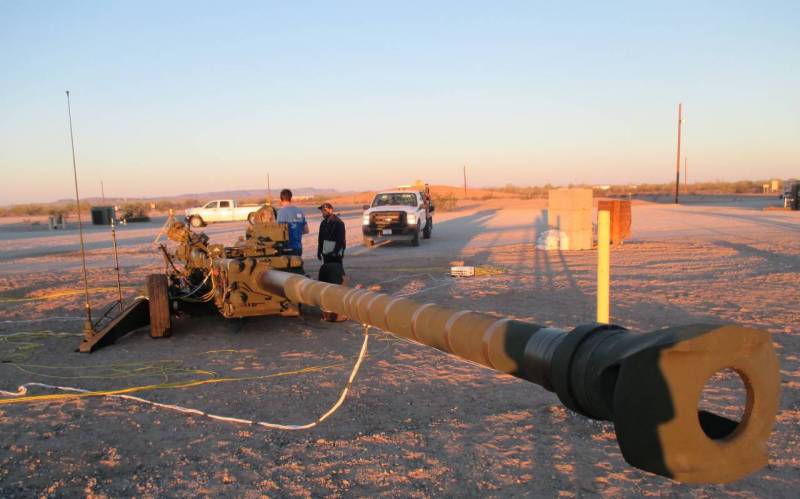 Experienced M777ER gun. Its range is higher than that of serial samples, but does not even reach 100 miles. Photo US Army
Increasing the firing range is a very difficult engineering task and requires the use of a number of technologies and design solutions. Which of them and in what combination will allow you to get a range of 1000 miles is a big question. Moreover, there is reason to doubt the fundamental possibility of creating such a system based on available or promising technologies.

Apparently, the Pentagon understands this and build their plans accordingly. The goal of the SLRC program so far is to create a prototype technology demonstrator that combines several solutions. His tests will show whether further growth of the characteristics to the indicated values ​​is possible. If such results are not obtained, the work will probably stop or the project will be transformed into something new.

Several basic technical solutions are known to increase the range of the artillery. All of them are already being used in serial and promising samples, including US developments. In particular, the development of the ERCA project has been ongoing for several years, the result of which has already become a towed and self-propelled howitzer guns with a range of at least 70 km. In the future, they intend to bring the range to 90-100 km.

One of the main ways to increase the range is to refine the gun by lengthening the barrel. Larger caliber systems also have some potential in this context. One should recall the multi-chamber architecture of the gun. All these solutions allow the projectile to report more energy and, accordingly, increase its range.

An alternative to existing systems on artillery gunpowders can be the so-called. light gas guns or electromagnetic accelerators. Such systems have high potential, but so far have not shown it outside the boundaries of polygons. In addition, they are not without significant shortcomings. 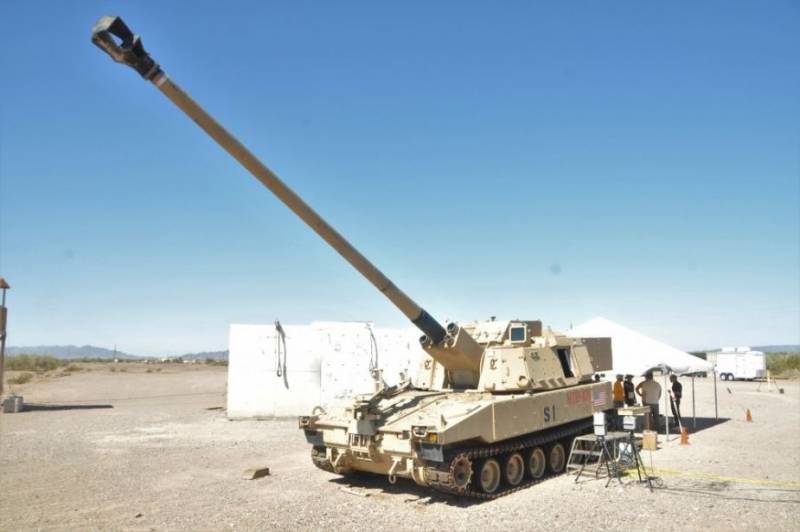 Experienced self-propelled guns XM1299 with an ERCA gun. Perhaps the result of the SLRC will look similar. Photo US Army
However, even a highly efficient gun will not be able to send a “simple” shell to the desired distance of 1000 miles, and it needs some help from the ammunition. A common way to increase range is to use active rockets. Own engine provides the projectile with additional acceleration after exiting the barrel and increases flight range. Distribution received solid-propellant rockets. New ammunition with direct-flow power plant is also being developed.

Due to the long range and duration of the flight, the projectile needs a homing system - otherwise, accurate shooting is out of the question. In this case, special requirements arise for the stability of systems. GOS should remain operational after a powerful push during acceleration in the trunk and during flight along the trajectory.

The result is a very interesting situation. The artillery complex with a high-energy weapon and a special active-reactive guided projectile will allow approaching the desired characteristics. At the same time, the main contribution to the increase in range will make the ammunition non-standard for artillery design.

Thus, instead of an ultra-long-range gun, a specific ground-to-ground missile system looms. Its main feature is an unreasonably complex launcher, which has the features of a barrel artillery system. The advantage of the gun could be the lower cost of the projectile compared to missiles, but its ammunition, created according to special requirements, will not work out simple and cheap.

In general, the SLRC program is not optimistic. Obtaining desired characteristics using known technologies is either impossible or extremely difficult and economically disadvantageous. In addition, the proposed gun has no real advantages over missile systems with similar characteristics.

The dubious nature of the SLRC program is already visible at the first review, but the Pentagon continues to work. This raises relevant questions, and several answers can be found. 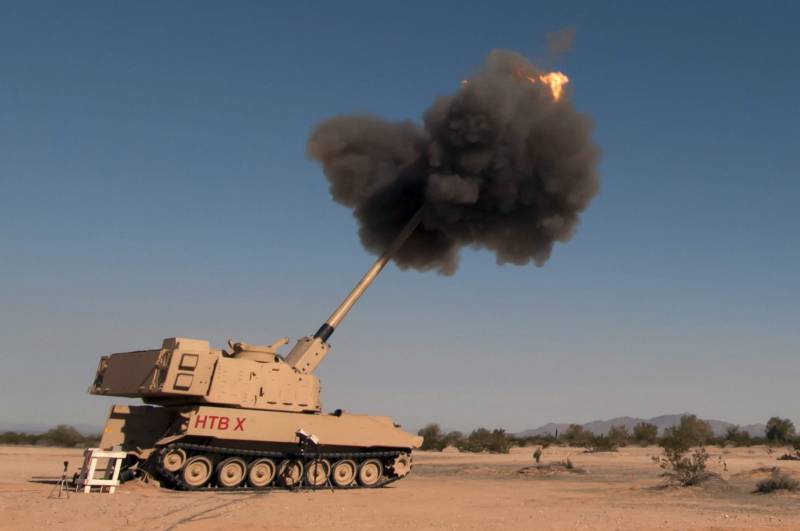 A shot for tens of kilometers - but not for a thousand miles. Photo US Army
The SLRC program can be seen as an attempt to explore the capabilities of industry and the potential of technology. It is unlikely that it will lead to the creation of a combat-capable ultra-long-range gun, but new developments can be used to develop existing structures or to create new ones. It is possible that the future experience of current army programs and fleet will be combined to create a new project.

Of particular interest is the proposed strategic gun concept. The SLRC-type gun will be able to work in remote and well-concealed positions, striking targets at great depths of defense. Fighting such a firearms can be extremely difficult for a potential enemy. The detection and destruction of a mobile artillery installation will not be a simple process, and the effective interception of shells is generally not possible. However, the creation of an artillery system with all these qualities is also unlikely.

Until recently, the SLRC gun could be a convenient way to circumvent the terms of the INF Treaty. Such an artillery system could take on the tasks of short-range missiles - not having a direct relationship to them. However, the Treaty ceased to exist, and now there is no sense in developing a gun for replacing missiles.

Waiting for a result

While the Strategic Long Range Cannon program is at its earliest stages, and participating organizations are engaged only in research. However, already in 2023, the Pentagon promises to bring an experimental cannon demonstrating technology for testing. It will show the possibility of firing at 1000 nautical miles - or demonstrate the impossibility of obtaining such results.

Real conclusions about the results of the SLRC program can only be made in a few years. In the meantime, American scientists and engineers have enough time to find the necessary solutions and create an ultra-long-range gun. Or to abandon an overly complex program without obvious results.

We are in Yandex Zen
Increase the range of barrel artillery. ERCA Program (USA)
The development of Soviet rocket artillery in the first period of World War II
52 comments
Information
Dear reader, to leave comments on the publication, you must to register.