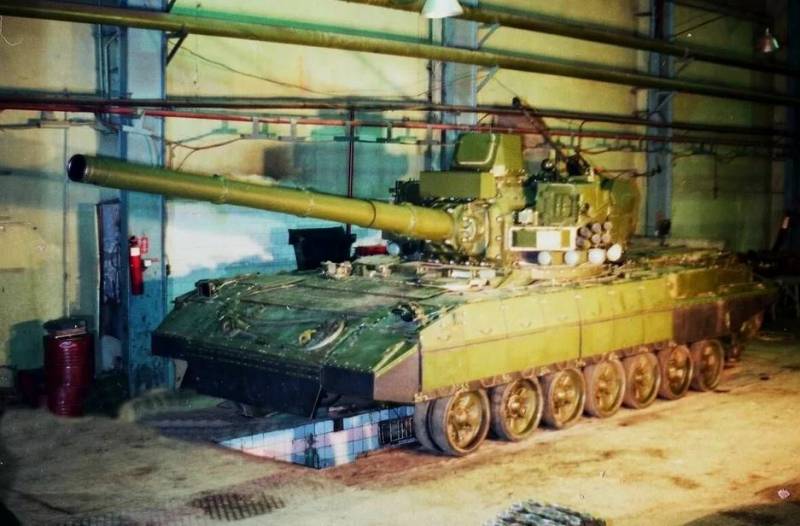 The desire to put a more powerful cannon on the tank has always been: along with security and mobility, firepower is one of the main characteristics tank. From stories The development of tanks is known that with each new generation the caliber of the gun increased more and more. Today, Western tanks have a gun caliber of mainly 120 mm, and Soviet (Russian) - 125 mm. No one has decided yet to install a higher caliber gun. In the West, tank guns of 140 mm caliber are being developed, and in the Soviet Union (Russia) several versions of a tank gun of 152 mm caliber were created, but none of the projects were implemented. What is the reason for the rejection of tanks of such a high caliber on tanks?

Tank-dangerous targets and weapons used to destroy them

The tank is a universal well-protected and mobile fire weapon of the battlefield, capable of conducting both close and long-range fire fighting with the direct support of mobile combined-arms units, as well as independent operations for the implementation and development of deep breakthroughs and the destruction of enemy military infrastructure.

The main objectives for the tank are tanks, artillery (self-propelled guns), ATGMs, lightly armored vehicles, fortified defense units, RPG calculations and enemy manpower, that is, targets that are within direct line of sight of the tank. All these goals to one degree or another are dangerous for the tank, against each of them the tank must have its own antidote. So, in the Arab-Israeli war of 1973, tank losses were distributed as follows: from anti-tank fire - 50%, aviation, RPGs, anti-tank mines - 28%, tanks - 22%. Losses of armored vehicles (tanks, infantry fighting vehicles, armored personnel carriers) during active battles in the Donbass in 2014-2016 amounted to 2596 units, of which 45% from MLRS and artillery fire, 28% from ATGMs and RPGs, 14% from tanks and mine detonation - thirteen%.

To defeat the entire set of targets, the tank has primary, auxiliary and additional weapons.

To suppress the calculations of RPGs, lightly armored targets and manpower of the enemy, auxiliary and additional weaponry of the tank is intended, to suppress lightly armored targets at long distances (up to 5000 m) guided missiles fired from a cannon are used. Auxiliary and additional weapons on the tank can be improved by installing automatic small-caliber guns and automatic grenade launchers.

For a tank gun, the main objectives are tanks, artillery (self-propelled guns), anti-tank systems and well-fortified enemy defense points. To suppress targets, four types of ammunition are included in the ammunition of the gun: armor-piercing subcaliber, cumulative, high-explosive fragmentation shells and guided missiles. In this case, the firepower of the BPS and OFS is determined by the kinetic energy of the projectile, and the KMS and SD are determined by the destructive effect of the cumulative jet.

For KMS and SD, the caliber of the gun is of no fundamental importance, since it gives only the possibility of increasing the mass of explosives, and for SD also the supply of rocket fuel. Therefore, it is more promising to increase not the caliber, but the initial velocity of the projectile, determined by the muzzle energy of the gun, which can be higher not only due to the increase in caliber.

Considering the effectiveness of BPS, KMS and SD in terms of defeating armored targets, it should be noted that due to the low speed of KMS and SD, a good antidote was found against them - dynamic and active defense. How the confrontation between them ends is still unknown.

The use of hypersonic BPS to defeat armored targets, which are less susceptible to dynamic and active defense compared to cumulative ammunition, may be more effective, and not the caliber, but the initial velocity of the projectile is decisive for them.

Such directions can be the development of electrothermochemical (ETC) guns using light gases (hydrogen, helium) as a propellant charge, providing an initial projectile speed of 2500-3000 m / s or electromagnetic guns with an initial projectile speed of 4000-5000 m / s. Work in this direction has been ongoing since the 70s, but it has not yet been possible to achieve acceptable characteristics of such "gun-projectile" systems because of problems in creating high-density electric energy storage devices in the required dimensions.

The development of the effectiveness of the OFS can also go not only by increasing the caliber, but by creating more advanced explosives and developing a new generation of the OFS with providing trajectory detonation of the projectile in the zone of reliable destruction with the help of a non-contact fuse or with a remote fuse at a given distance inserted into the projectile at the moment loading guns, work on which has been ongoing since the 70s.

Increasing firepower by increasing the caliber of the gun leads to a significant increase in the mass of the tank and, as a result, to a decrease in its protection and mobility, that is, on the whole, the effectiveness of the combat vehicle decreases.

An example is the installation on the promising Boxer tank, developed at the KhKBM, in the mid-80s, a “semi-extended” 152-mm 2A73 gun. The development of the tank began with the installation of a 130-mm gun, but at the request of the GRAU, the caliber was increased and a 152-mm 2A73 gun with separate loading was developed for the tank. For the crew’s safety, the ammunition from the turret was taken out to a separate armored compartment between the fighting compartment and the military transport department, which led to the lengthening of the tank’s hull, the development of complex overall units of the automatic loading system and an increase in its mass. The mass of the tank began to fall out over 50 tons, to reduce it began to use titanium in the frontal reservation package and the manufacture of a running tank, which complicated the design and increased the cost.

Subsequently, they switched to a unitary munition and placed it in the fighting compartment. The mass of the tank decreased, but the deployment of ammunition along with the crew reduced the survivability of the tank. With the collapse of the Union, work on the tank was curtailed.

An attempt to install the same “semi-extended” 152 mm 2A83 gun was made on the Object 90 tank developed at the Uralvagonzavod in the early 195s with the crew stationed in an armored capsule in the tank body. This project was also not implemented and closed. I suppose that due to problems with the mass of the tank due to the use of the 152-mm gun and the inability to realize the required characteristics in the given mass of the tank. Apparently, taking into account the experience gained in these projects, the Armata tank also refused to install a 152-mm gun.

Attempts to install a 152-mm cannon on the tank in either the Soviet (Russian) or Western tank building schools did not lead to positive results, including due to the impossibility of achieving the optimal combination of characteristics in terms of firepower, security and mobility of the tank.

It is hardly promising to increase firepower by increasing the caliber of a gun; this will have to be achieved by creating more effective gun-projectile systems using new ideas and technologies that can increase firepower without reducing the protection and mobility of the tank.

We are in Yandex Zen
Armored vehicles of Ukraine: results, potential, prospects ...
The fire control devices of the Soviet and German tanks of the Second World War. Myths and Reality
225 comments
Information
Dear reader, to leave comments on the publication, you must to register.