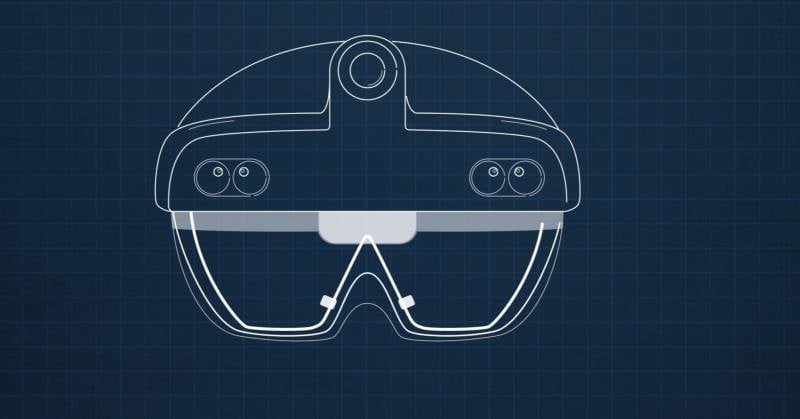 HoloLens glasses for the military at the prototype stage. Image: cnbc.com

In 2016, one of those who decided to transfer augmented reality technologies to military rails was the Ukrainian company LimpidArmor Inc. The presentation of her system, based on overseas Microsoft HoloLens game glasses, took place at the traditional exhibition “Zbroya bezpeka 2016”. According to the idea of ​​developers, the most optimal would be to use such devices inside tanks to provide operators with a regime of "transparent armor" 360 degrees. To do this, armored vehicles are equipped with video and thermal imaging cameras from the outside, as well as integrated with on-board systems, including the T-64 tank’s FCS. 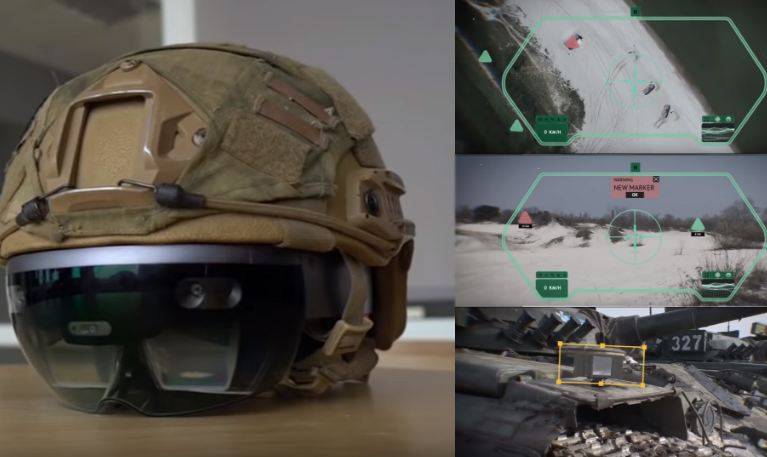 Ukrainian Land Platform Modernization Kit is based on the Microsoft HoloLens platform. Photo: uprom.info
This allows you to impose on the image of augmented reality the parameters of the power plant, sighting and navigation equipment and other important information. In total, Ukrainian developers gave birth to three generations of their systems, the last of which is called the Land Platform Modernization Kit. In this model, among other things, it became possible to connect to reconnaissance drones hovering over the battlefield.

“Someone sees the speed and supply of gas, someone - an aiming system. In other words, we offer a comprehensive solution that can visualize almost all processes related to the management and exchange of information between land transport operators, as well as reduce losses ”
,
- says Mikhail Grechukhin, founder of LimpidArmor Inc. startup 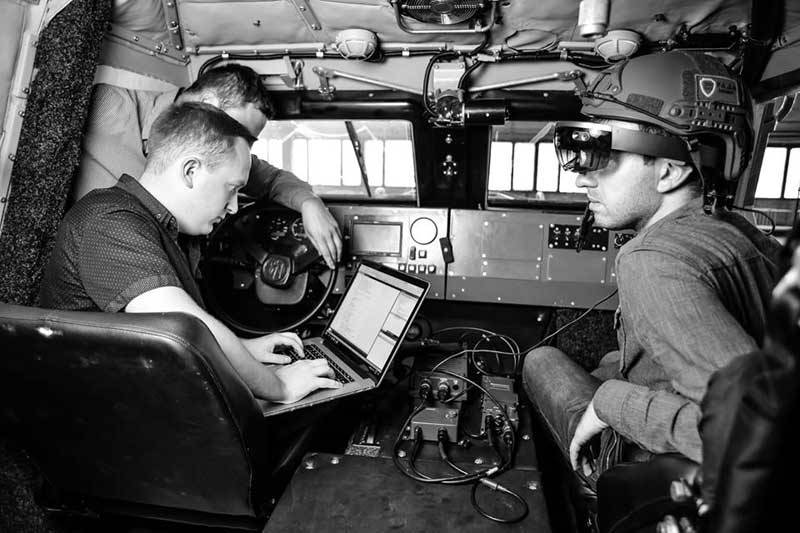 In Ukraine, testing augmented reality glasses for armored vehicles. Photo: itc.ua
Despite the fact that Grechukhin is a veteran of the ATO, the technology did not cause much enthusiasm in the Ministry of Defense. But it was included in the list of 27 most significant scientific developments providing a technological breakthrough in Ukraine.

A very interesting thing, by the way, is look. The list of Ukrainian innovations includes a new form of carbon and beetle larvae capable of digesting plastic waste. Augmented reality glasses based on Microsoft HoloLens architecture can be found in the “Miracles of Information Technologies” section, as well as in short lists of various technology awards, but not in the Ukrainian army. Grechukhin even wanted to sell such a valuable idea in NATO countries, but the Europeans reasonably reasoned that if such a thing was needed, they would completely master its independent production. Moreover, the technology is far from new. The only advantage of Ukrainian “armored glasses” was the low cost. By this time, the development company HoloLens was already preparing to present a military version of its development, which forever overshadowed the Ukrainian craft.

Now augmented reality is gradually penetrating into all spheres of human existence. For example, now even on budget cars you can find indicators of basic information about the condition of the car, located in front of the windshield. And in the middle price category, the lack of projection onto the glass in front of the driver has already become the rule of bad taste.

Such equipment looks already quite familiar in wheeled, flying and armored vehicles, but in the case of individual use, everything is not so simple. If we discard toys such as Pokemon Go and animated views of 200-ruble and 2000-ruble bills, then providing the user with real-time extended information about the surrounding world has become a serious challenge even for global technology corporations. The first to be burned on this Google with the Glass project, which was widely announced and looked forward to, but in the end there was one disappointment. 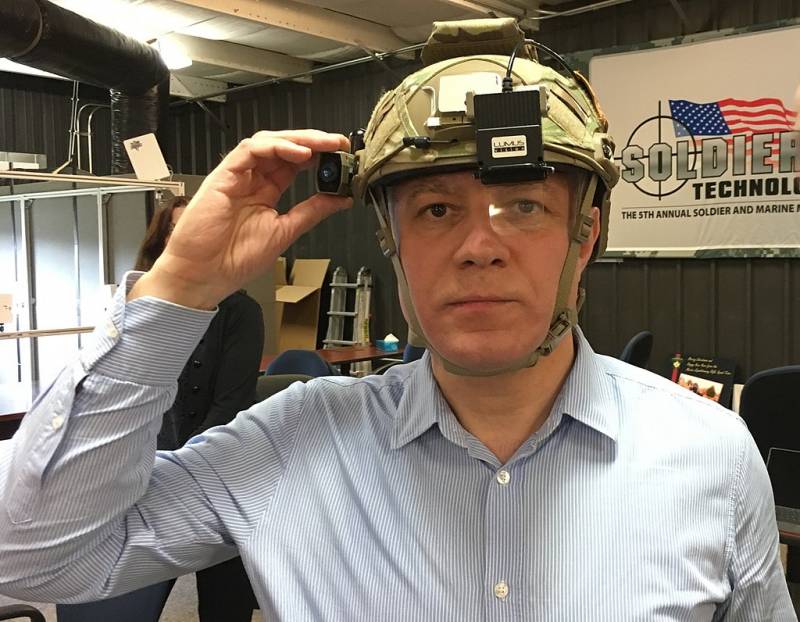 ARC4. Photo: ru.wikipedia.org
But at DARPA, for some time, they were developing very similar to Google Glass development, called ARC4, which later did not become a production model. In fact, it was a portable helmet-mounted indicator that informed the fighter about the most important thing on the battlefield - the position of his units, a map of the area, and also the location of the enemy. For some time, Americans tested a simpler information technology - tablets, smartphones and laptops, but came to the conclusion that all this seriously distracted fighters from an ever-changing tactical situation. Therefore, as in the case of ARC4, information must be displayed directly in the field of view of the soldier so that the hands also remain free. 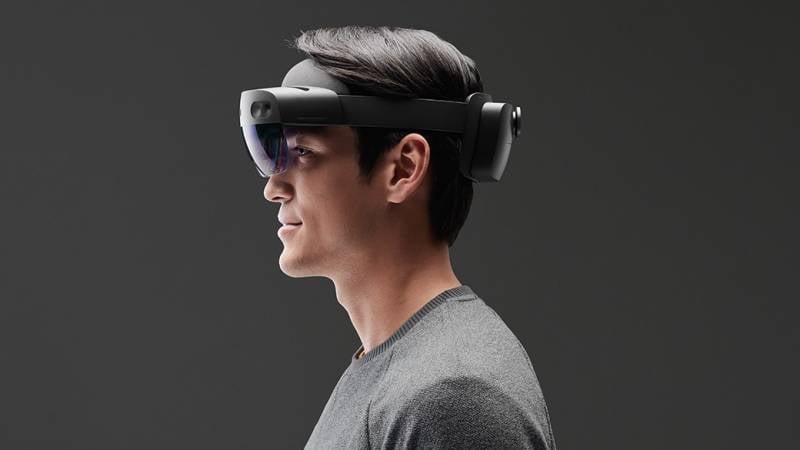 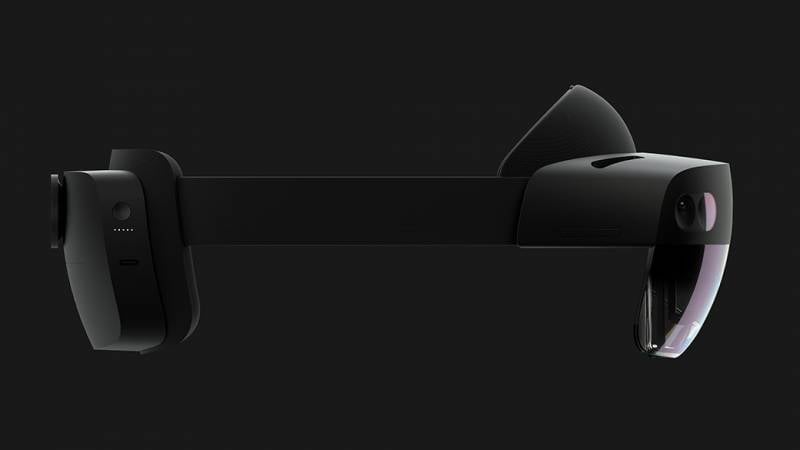 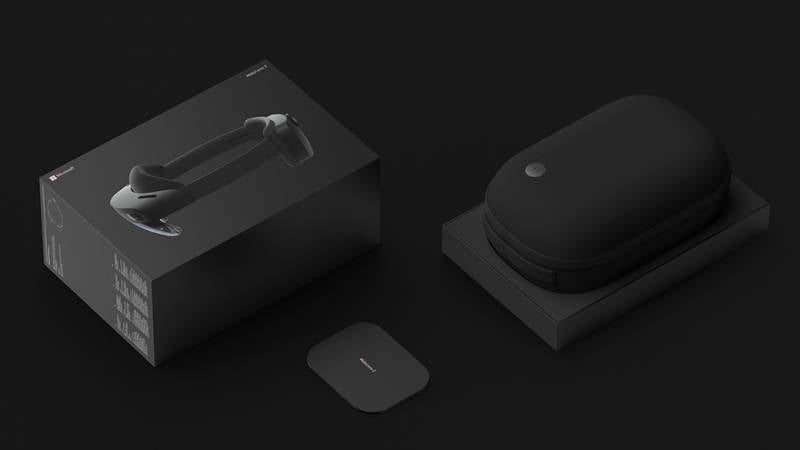 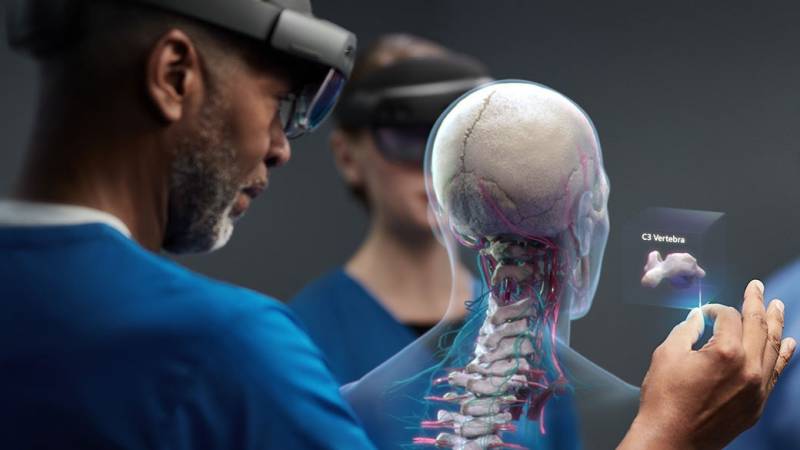 Civil Microsoft HoloLens 2 and the nuances of their application. Photo: microsoft.com
The very idea of ​​expanding the information field of every American soldier during the battle did not leave the minds of the military. For over 5 years, Microsoft has been developing a military version of its HoloLens game points. As you can see, Microsoft did not go along the path of Google and did not begin to develop a universal device for augmented reality, but initially proposed a niche product compatible with Kinekt gaming technology. In the future, demand for it expanded significantly, especially from industry, the service sector, and even surgery. Naturally, the Pentagon could not miss a novelty with such potential, and Microsoft took up the defense order, while collecting charges of supporting American militarism.

HoloLens glasses are a complex device that forms a video sequence in front of the user in accordance with the spatial position of the head and the set of tasks to be performed. The device is equipped with four cameras (two on each side of the glasses), orienting the device in the surrounding world, and several microphones. HoloLens can recognize speech, several gestures and, most importantly, combine a real image with a synthesized one. Currently, in the version of HoloLens 2 running Windows 10, the device costs about $ 3500.

In the military specification, glasses are based on the second generation of development. "Combat" HoloLens should become the main elements of the IVAS system (Integrated Visual Augmentation System), which combines sights in a single field of thermal imaging and infrared vision weapons, navigation and a host of other information sources. At the same time, the glasses are connected wirelessly with sighting systems of personal small arms, which is an important advantage when shooting from around the corner and other shelters. In this version, “smart” glasses are interfaced with equipment from the promising American line of personal weapons Next Generation Squad Weapons. In addition, in the field of view of the fighters, glasses can project, for example, a plan of the building in which the unit and the location of each fighter are located. 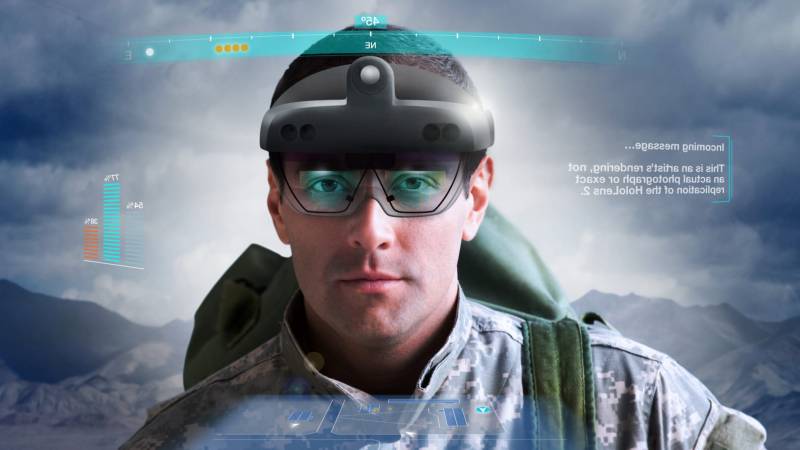 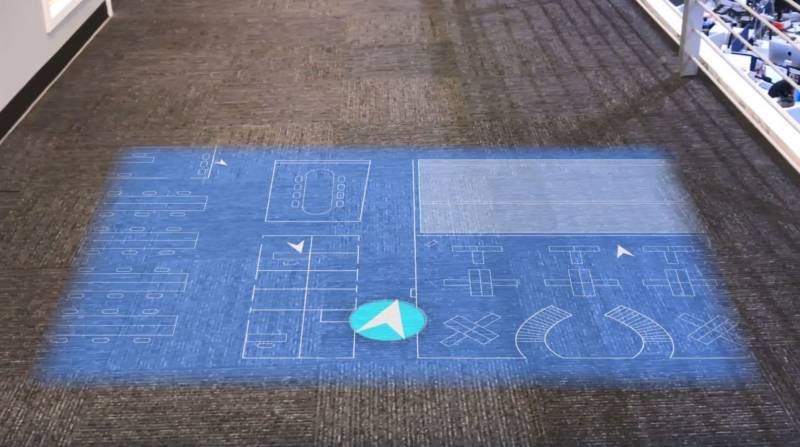 The layout of the building in which the user is located is projected in three-dimensional form onto the screen. Image: cnbc.com
Few eyewitnesses who have time to try on a new product, claim that now a real battle can be like a game shootout in “Call of Duty”. Among the bonuses, the developers intend to introduce training and exercises into the system, as well as connect the user's heartbeat sensors to HoloLens to assess their functional state. For the harsh conditions of military life, by analogy with Ukrainian developments, HoloLens are enclosed in a shockproof case and equipped with a battery designed for four to five hours of continuous operation. 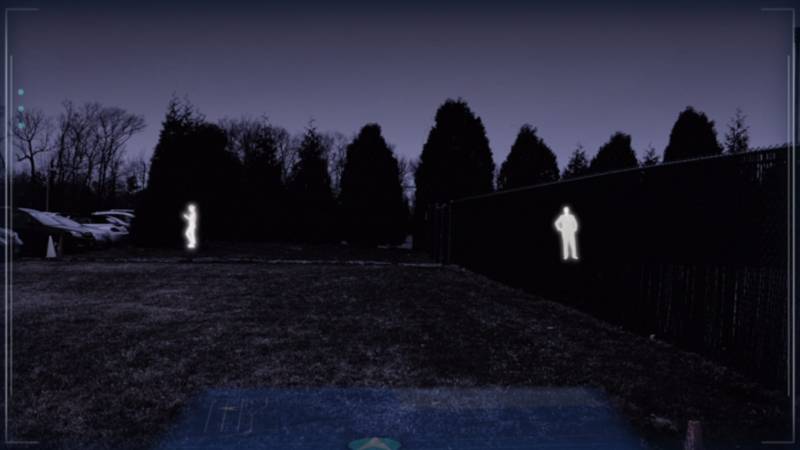 Picture of combining infrared and thermal imaging surveillance channels. Image: cnbc.com
Glasses both peaceful and in the military version are not associated with any head devices (tablets, smartphones and laptops), and this is a serious plus in terms of autonomy. And where now without artificial intelligence? In HoloLens 2 IVAS, the smart machine is responsible for target detection, tracking, and identification. This, by the way, is a very useful thing in such a gadget. Among US war veterans, there is criticism of such high-tech toys. The reason lies in the difficulty of identifying “friend or foe” in the combined visual field of infrared and thermal radiation. American users can only rely on AI, capable of determining in battle who is the enemy and who is the comrade. Moreover, the US defense department plans to purchase about 40 thousand of such fashionable military accessories next year, which will allow equipping every tenth soldier with them.

We are in Yandex Zen
Transparent protection: the search for new solutions
Bulletproof glass. Compromise of mass, value and characteristics
37 comments
Information
Dear reader, to leave comments on the publication, you must to register.