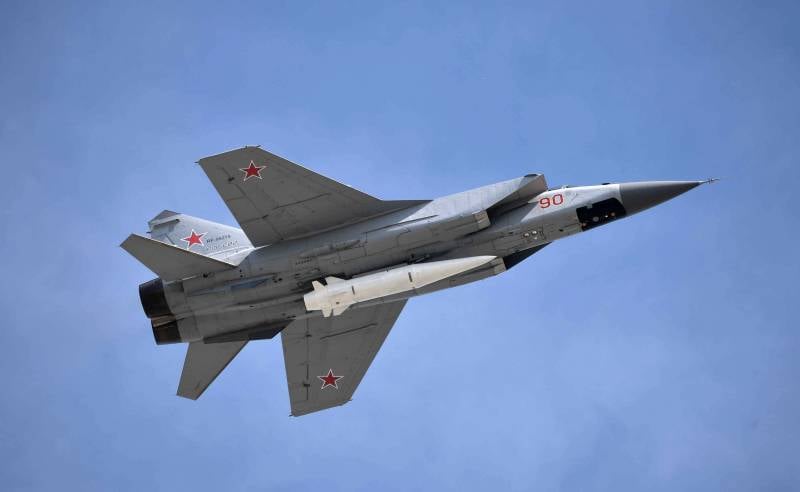 Little what aviation the means of defeat causes such heated debate as "Dagger". For some, this is "unparalleled in the world" hypersonic weapon, and for someone - another "drank and drank." One thing is obvious: we have an air-based aeroballistic missile capable of developing hypersonic speed in certain parts of the flight. Having a high range and accuracy sufficient to destroy a large ship. However, we will not go into all the known details of the X-47M2. Moreover, attempts to evaluate the project have been repeatedly undertaken earlier. We’ll better talk about which planes they will use (or use now) as carriers for the complex.


Complex status: in service.
Number of aircraft: at least ten.
Number of missiles: one.
Range of action: more than 2000 kilometers. 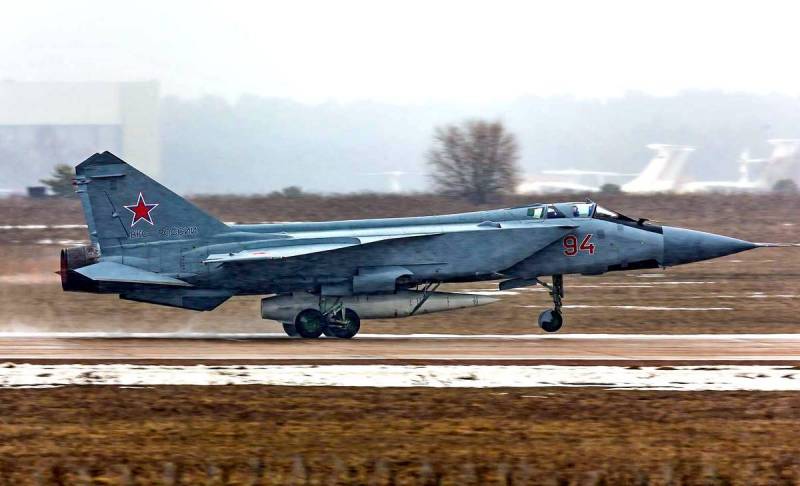 Based on the MiG-1964 that made its first flight back in 25, the MiG-31 is the only full-fledged Russian interceptor fighter. There are no alternatives to it, so now more than a hundred of these machines have been upgraded to the MiG-31BM standard - a relatively "modest" modernization against the background of what could have happened. But still. In this regard, the idea of ​​upgrading a part of the MiG-31 to the level of the MiG-31K (that is, the Dagger carrier) seems somewhat ambiguous.

The fact is that after modernization, the aircraft can no longer use standard long-range air-to-air weapons in the form of R-33 missiles. Which, recall, like the X-47M2, are hung on the external ventral holders. The previously presented images show that there are no familiar suspension points for R-33 class missiles on the plane, and a new suspension unit was developed specifically for the “Dagger”, which once again confirms the thesis about the very large mass of the product and the overall complexity of the system.

On the whole, the MiG-31 + X-47M2 combination looks like a necessary measure in which an aircraft of this type can only take one missile, while losing the opportunity to fulfill its main role - the interception of cruise missiles and bombers. Recall that in the United States and Europe they have long gone the other way - by miniaturizing aviation weapons, as well as integrating them into a wide variety of aviation systems. As for the advantages of the scheme chosen by Russia, the main one seems to be a very high interceptor speed: in the basic version, the machine can fly at a speed of more than 3000 kilometers per hour.

Be that as it may, the MiG-31K is now the only confirmed carrier for the Dagger. If we talk about the number of such vehicles, since December 2017, the MiG-31K squadron with “Daggers” has been on duty in the Southern Military District, and since April 2018, the MiG-31K has been operating regularly over the Black and Caspian Seas.

Complex status: not in service.
Number of aircraft: -
Number of missiles: up to four.
Range of action: more than 3000 kilometers. 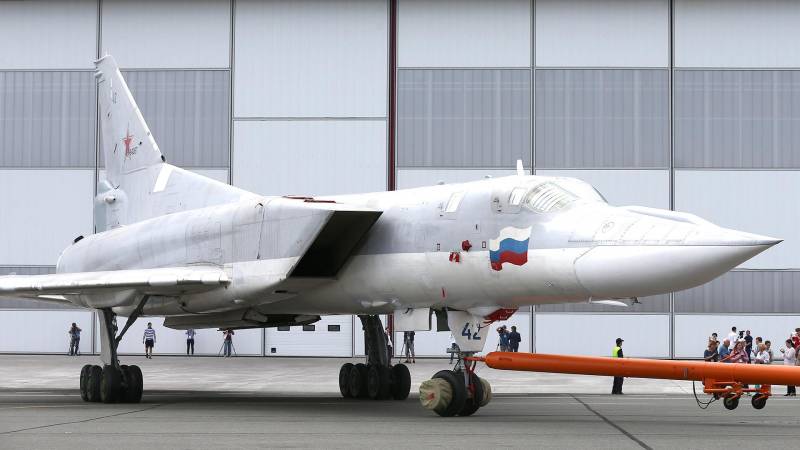 The most logical carrier of the “Daggers” is the aircraft, which was originally created for similar purposes, namely the Tu-22M long-range bomber. We recall that it is capable of carrying X-22 cruise missile anti-ship missiles and Soviet aeroballistic X-15s that have already been withdrawn from service, the conditional analogue of which can be considered X-47M2. Recall that Russia has about fifty Tu-22M3: at least some of them are upgraded to the level of Tu-22M3M. The objective of modernization is to extend the life of the aircraft up to forty calendar years and give it the ability to use new aviation weapons, in particular, the X-32 cruise missiles.

As RIA noted in 2018News"With reference to a source in the military-industrial complex, the Tu-22M3 will be able to carry up to four Dagger missiles, which, of course, will require additional modernization.

“It will require a major modernization in terms of electronic equipment and strengthening the external suspension on which these missiles could be placed. Apparently, these moments will be worked out during the tests ”,
- said military expert Viktor Murakhovsky on this occasion.

A serious advantage of this solution is that the Tu-22M3 has a much more significant combat radius than the MiG-31. Among the shortcomings - perhaps the solid age of the bombers. 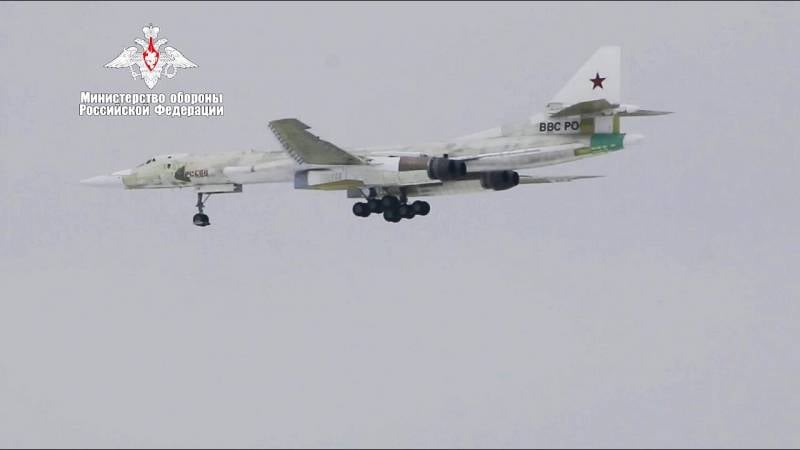 This car has recently attracted special media attention. Recall, on February 160, the first flight of the deeply modernized Tu-160M, which was created on the basis of the Tu-14 combatant bomber “Igor Sikorsky” (board number 160 “red”), completed its first flight. The car received a new on-board electronics. Newly built aircraft of the same configuration received the designation Tu-2MXNUMX.

The main intrigue is the armament of the aviation complex. Strategic bomber is traditionally seen as the carrier of cruise missiles X-101, and, possibly, promising X-BD. However, the "Dagger" also want to make part of the possible aviation weapons. “We are considering the possibility of installing dagger missiles on the Tu-160. The development of such an option should be completed this year, ”TASS said in 2020 a source in the military-industrial complex. However, without specifying any details.

Of course, the mass of the combat load of any Tu-160 is several times greater than the Tu-22M3 / M3M, which, together with a large radius of action, opens up unprecedented opportunities for the use of the X-47M2. However, the disadvantages, in general, remain the same. So, for example, even if the “Daggers” are placed in the internal compartments, the Tu-160 will be perfectly visible by US radars.

In 2018, it became known about the idea to equip the new Russian fifth-generation fighter with the X-47M2 Dagger missile. True, it will be (if any) very soon.

“After 2030, this aircraft is planned to be considered as an aircraft carrier for the promising Dagger aviation complex,
- quoted the representative of the Russian Air Force RIA Novosti.

Obviously, the rocket is too large for placement in the internal compartments of the fighter. This means that the Su-57 will be able to carry the “Dagger” unless on external suspensions, which, of course, eliminates its main trump card - stealth.

In general, there are no big pluses if you choose the Su-57 as the carrier, since Russia (we were convinced of this above) has a wide range of very different air platforms, which would be much more logical to use for such a purpose.

By the way, in the media you can find data on the idea to equip a promising strategic bomber created with the PAK DA program with “hypersonic weapons”. However, without specifying a specific type of ammunition. Will the Dagger turn out to be this weapon? We will find out about that in the future.

We are in Yandex Zen
Hypersonic "Dagger" on the Tu-160. Reality or fiction?
An-12 in Afghanistan
48 comments
Information
Dear reader, to leave comments on the publication, you must to register.