In 2013, Kazakhstan and South Africa agreed to work together in the field of armored combat vehicles. The industry of the two countries finalized several finished projects and brought some of them to serial production and operation. Other samples are just being prepared for production. Among them there is a wheeled armored wheeled vehicle (BKM) "Barys 8x8" (Kaz. "Bars").

From Africa to Asia

Later, the Paramount Group developed a new version of the BKM with a four-axle chassis, a different armored hull and other features. Such an armored personnel carrier / infantry fighting vehicle was named Mbombe 8. Both armored vehicles are already ready for mass production and are offered to customers. To date, the development company has managed to receive several such orders. 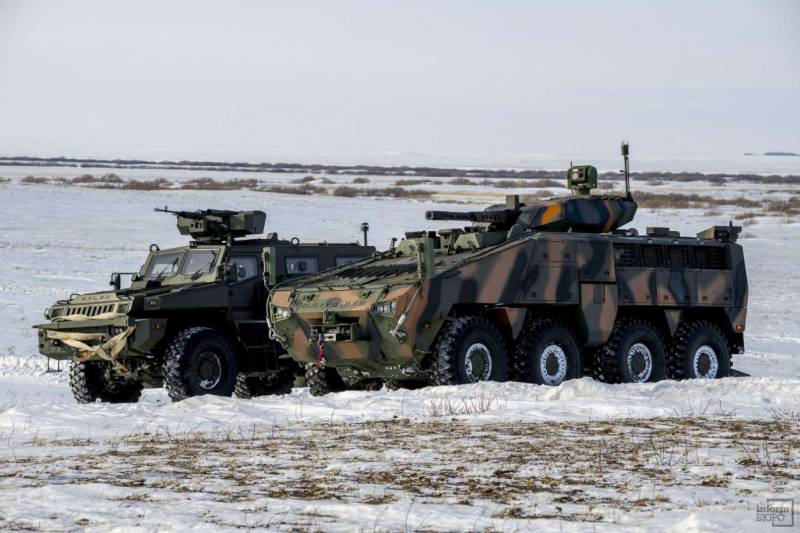 Technique of production in Kazakhstan. In the foreground is the experienced Barys armored personnel carrier with the Ansar combat compartment. Photo by G. Bedenko / informburo.kz
In 2013, a major agreement appeared stipulating cooperation between South Africa and Kazakhstan. In accordance with it, a joint venture Kazakhstan Paramount Engineering (KPE) was created, which was to complete the development of several South African BKM and master their production. In 2014-15 A factory was built on which it was planned to deploy the assembly of equipment.

Among the samples planned for production, there were both variants of the Momboe armored personnel carrier - with a three- and four-axle chassis. Their modifications for Kazakhstan received the general name "Barys", to which the wheel formula is added.

Already in 2016, KPE manufactured the first prototype Barys 8x8. The machine went to the test and repeatedly participated in various exhibitions. Serial production has not yet begun. However, the development company does not lose time - it creates and tests new variants of the weapons complex.

BKM "Barys 8x8" is a multi-purpose wheeled chassis with a landing compartment, capable of carrying various weapons. Depending on the equipment and assigned tasks, it can be an infantry fighting vehicle or an armored personnel carrier. 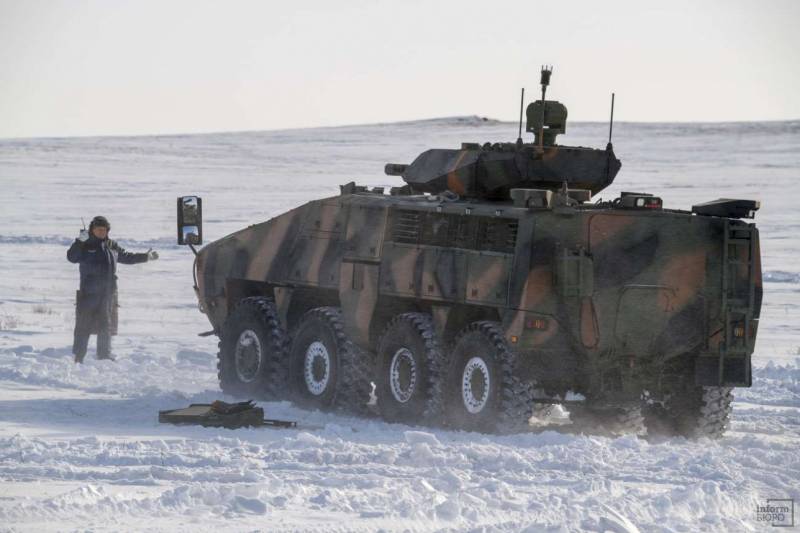 Experienced Barys 8x8 at the training ground. Photo by G. Bedenko / informburo.kz
"Barys 8x8" is built according to the traditional for modern BKM scheme with a front engine and a large inhabited compartment in the center and aft of the hull. Booking a car provides protection against small arms weapons, fragments and min. Ballistic protection corresponds to level 3 of the STANAG 4569 standard (12,7 mm non-armor-piercing bullet); mine - to level 4b (10 kg of TNT under the wheel or bottom). Mine protection is performed without the use of a V-shaped bottom, which positively affected the vertical dimensions.

In the bow of the hull there is a power plant based on a 550 hp Cummins diesel engine Transmission with automatic transmission provides all-wheel drive. Wheels with tires 16.00 R20 have an independent suspension and pneumatic brake system with ABS. Acceleration to a speed of 100 km / h, cruising range - 800 km.

The crew of the Barys 8x8 includes two or three people. The driver and commander are located in front of the inhabited compartment and have their own hatches. Behind them can be set the workplace of the gunner-operator. Aft hull holds eight seats for landing; fighters land through a ramp or sunroofs. Energy-absorbing seats are provided for the crew and the landing. 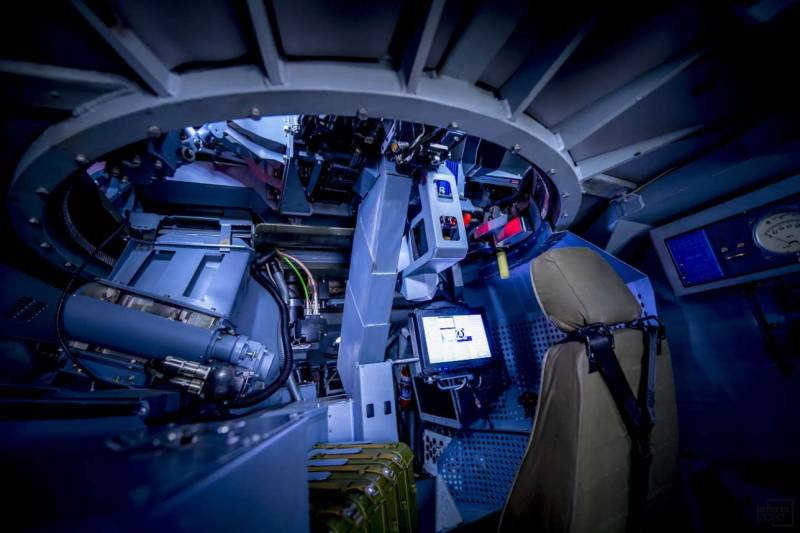 Internal units of the fighting compartment. To the left is the ammunition box, to the right is the position of the operator-gunner. Photo by G. Bedenko / informburo.kz
Like other samples of the South African development, Mbombe BTR received some new tools related to the specifics of operation in Kazakhstan. The engine warm-up system was used, there is also climate control based on an air conditioner with a capacity of 12 kW.

In accordance with current trends, Mbombe / Barys can carry various remotely controlled combat modules with different arms. To date, KPE has introduced three options for such equipment "Barysa". It is curious that one of the versions of the BKM is equipped with a Russian-developed DBM. 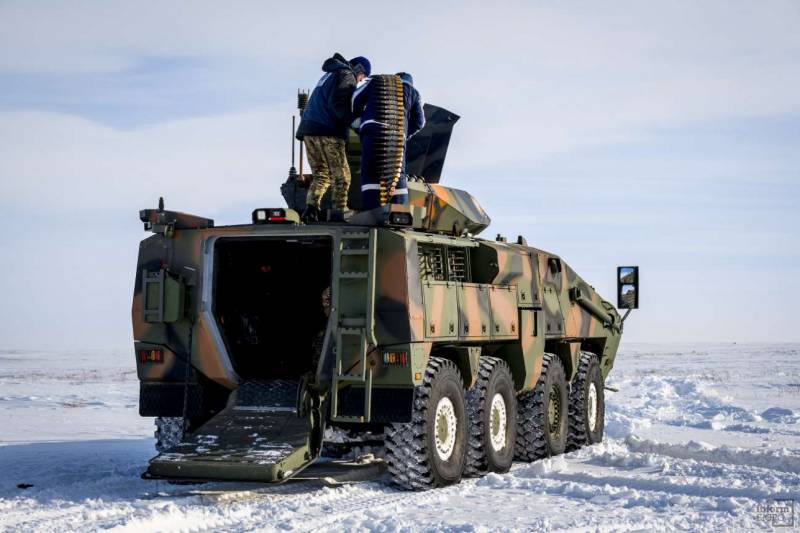 Ammunition loading. Photo by G. Bedenko / informburo.kz
During the first shows, Barys 8x8 carried the combat development module of the Kazakh-Turkish joint venture Kazakhstan Aselsan Engineering. This product is a fairly large turret with a 30-mm 2A42 gun, a PKT machine gun, optoelectronic systems and fire control systems. The tower is made uninhabited; the control panel is located inside the body of the carrier armored vehicle. The KAE project provides for the possibility of installing other weapons, up to 57-mm artillery systems.

Later, at one of the exhibitions, a prototype BKM was shown with a mock-up of the Russian-made AU-220M combat module. In this case, the main weapon of the Barys becomes a 57-mm automatic gun with enhanced combat characteristics. The gun is supplemented with a normal caliber machine gun.

Currently, KPE is testing an experienced armored personnel carrier with a promising Ansar combat unit of its own design, commissioned by the Ministry of Defense of Kazakhstan. This product is made in the form of a rotating tower with a turret basket carrying the necessary equipment. Inside the armored dome mounted 30-mm gun 2A72 and 7,62-mm machine gun PKT. Outside, an optical-electronic unit and a radar tracking and tracking station are located on it. In the future, the installation of anti-tank missile weapons is possible. Below the epaulet level in the basket is placed the workplace of the gunner-operator with the necessary instruments. Next to it are ammunition boxes and devices for the supply path of ammunition. 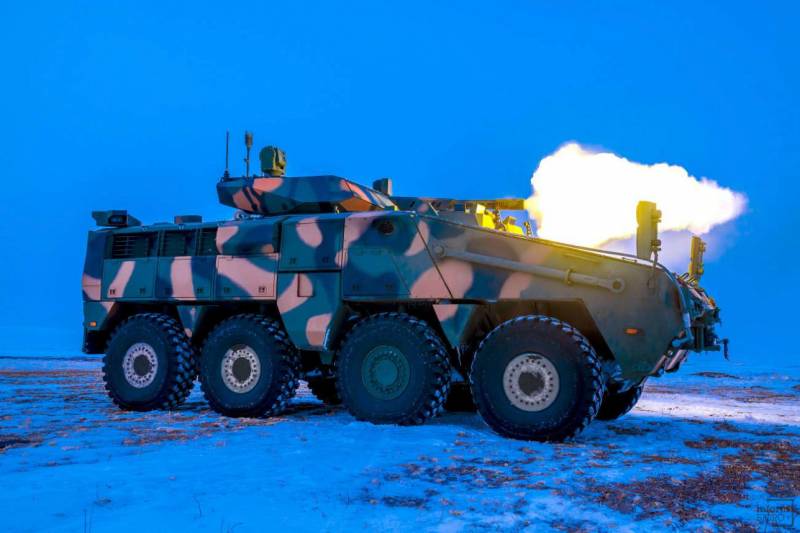 Shooting from a 30 mm gun. Photo by G. Bedenko / informburo.kz
The Ansar combat unit uses the Shyla unified fire control system, which is also used in other KPE DBMS. It includes digital surveillance and calculation tools for firing, automatic target tracking, etc. With the help of such SLAs and existing weapons, Ansar can fire ground and air targets in the entire range of ranges.

Armored wheeled vehicles "Barys" of two versions so far exist only in the form of prototypes. Already conducted tests that have shown their own characteristics of this technique. We are currently testing combat modules. For example, a few days ago the next test firing took place using the Ansar product.

"Barysy" has not yet been adopted and mass production has not yet been launched. Nevertheless, KPE is ready to begin assembling such equipment in the interests of a domestic or foreign customer. It is assumed that the first buyer will be the armed forces of Kazakhstan.

What version of the Barys 8x8 can enter service is unclear. The Army of Kazakhstan plans to replace old types of armored vehicles, and for this, various modern models with one or another feature may be needed. It can be assumed that modules with 30-mm guns have good prospects. They were developed at the request of the Ministry of Defense of Kazakhstan and confirm their characteristics. 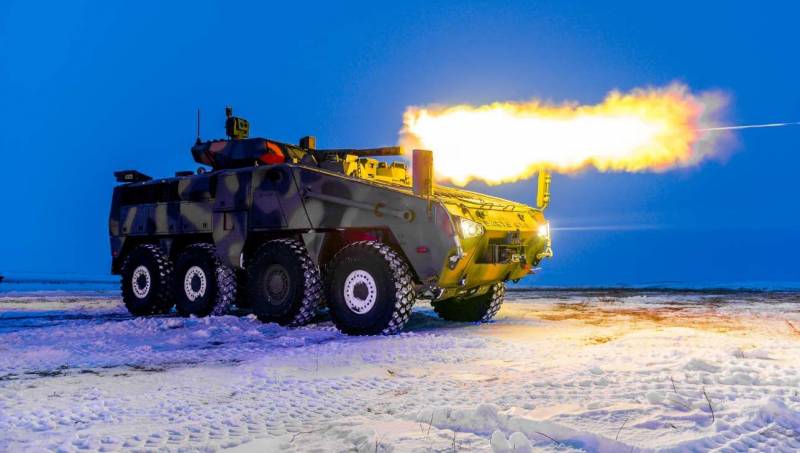 Photo by G. Bedenko / informburo.kz
The future of the AU-220M module will be determined later - when the Russian side will present a finished sample of this product, suitable for full-fledged tests. Perhaps in the future, the development of the KAE DBMS modification with similar high-power weapons, which was originally planned, will be completed.

The Barys 8x8 project and other promising models of armored vehicles created and manufactured by KPE can be considered a successful example of international cooperation that has a positive effect on the condition of troops. Having no own school for the construction of armored vehicles, Kazakhstan found an opportunity to get a number of modern models.

Companies from South Africa, incl. Paramount Group are considered world leaders in the field of wheeled armored vehicles for various purposes. Collaboration with industry leaders allowed Kazakhstan to obtain modern models of equipment, and with them production technologies. In this context, cooperation with Russia should also be noted. Two projects are being considered at once, involving the installation of a 57-mm gun of Russian production, including together with a ready-made combat module.

Barys 8x8 has not yet been adopted by Kazakhstan and does not affect the country's defense. Nevertheless, the machine is already ready and undergoes various tests aimed at obtaining new opportunities. Due to this, the minimum time will pass from the signing of the contract to receiving the serial equipment - and the full potential of joint work on projects will be realized.

We are in Yandex Zen
Armored car Mbombe 4 (South Africa)
The project of the Barys armored personnel carrier (Kazakhstan / South Africa / Russia)
73 comments
Information
Dear reader, to leave comments on the publication, you must to register.