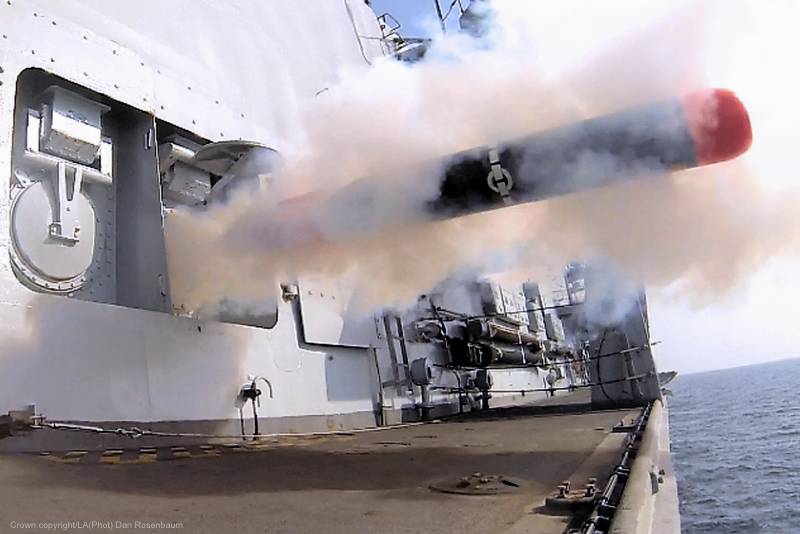 What needs to be done to destroy a modern two-hull submarine? First of all, it is necessary to punch up to 50 mm of the external acoustic rubber layer, then about 10 mm of light-weight steel follows, a ballast water layer up to one and a half meters thick and, finally, about 8 cm of high-strength steel of the main body. For guaranteed defeat of such "armor", it is required to deliver at least 200 kilograms of explosives to the boat, and for this the carrier, that is, a torpedo or a rocket, must be very large. As one of the exits, gunsmith engineers suggest using several small torpedoes for the attack (it is required that they also hit approximately one part of the submarine), which is not much more effective than using one large 400-mm torpedo.

Small-sized Mk-46. Photo: seaforces.org
There is a need for the development of new schemes for underwater ammunition, the design of which departs from traditional high-explosive combat charging compartments with contact and non-contact fuses. As an option, the use of plastisol and aluminized explosives is considered, providing an excellent high-explosive effect in combination with a low shock-wave sensitivity. To increase the effective impact of a high-explosive torpedo on the hull of a submarine, multipoint charge initiation is used, which allows directing most of the energy of the detonation wave in the desired direction. Also, the superposition of shock waves from a synchronous explosion when exposed to the hull of a submarine looks effective - for this, several small torpedoes can be used. Finally, the most promising is the development of cumulative torpedoes by analogy with the "land" methods of combating heavily armored objects. 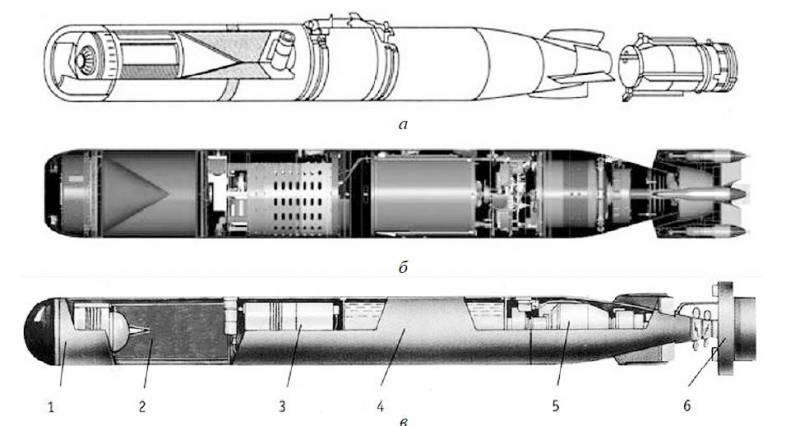 Small-sized anti-submarine torpedoes with cumulatively high-explosive combat loading compartments: a - torpedo MU-90 Umpact; b - torpedo Stingray "; c - torpedo TT-4. 1 - nasal compartment; 2 - combat charging compartment; 3 - instrument compartment; 4 - power unit compartment; 5 - aft compartment; 6 - braking and stabilization system. Source: Izvestia RARAN
At first glance, the cumulative torpedo is just a godsend for submarine hunters. The dimensions of such ammunition can be much smaller than traditional torpedoes, which allows you to mount them in pieces at once, even on an anti-submarine helicopter. In addition, the submarines have not yet been equipped with specific protection against such torpedoes by analogy with land-based armored vehicles, which makes them especially vulnerable to narrowly targeted gas-cumulative flows of detonating munitions. Among the specific conditions for the use of cumulative torpedoes, the requirement of observing the direction of the axis of the cumulative charge with the smallest deviation from the normal stands out. Simply put, if a high-explosive shell does not make much difference from which angle to approach the target, then the cumulative torpedo is important in time to orientate relative to the hull of the submarine. In full analogy with modern anti-tank anti-tank munitions, the developers of the domestic anti-submarine weapons offer to get away from the axial location of the cumulative charge. You can place charges either obliquely to the axis of the torpedo, or generally transversely - this allows you to hit the target on a “miss”. The transverse arrangement of the cumulative charge is advantageous in the absence of a massive torpedo head on the path of the damaging stream (no need to pierce the instrument compartment of the ammunition) and allows you to increase the diameter of the cumulative funnel without particularly increasing the dimensions of the ammunition. A new design complication is torpedoes. There will be a sensitive non-contact fuse taking into account the position of the ammunition relative to the submarine skin - no one has canceled the requirement of the smallest deviation from the normal. 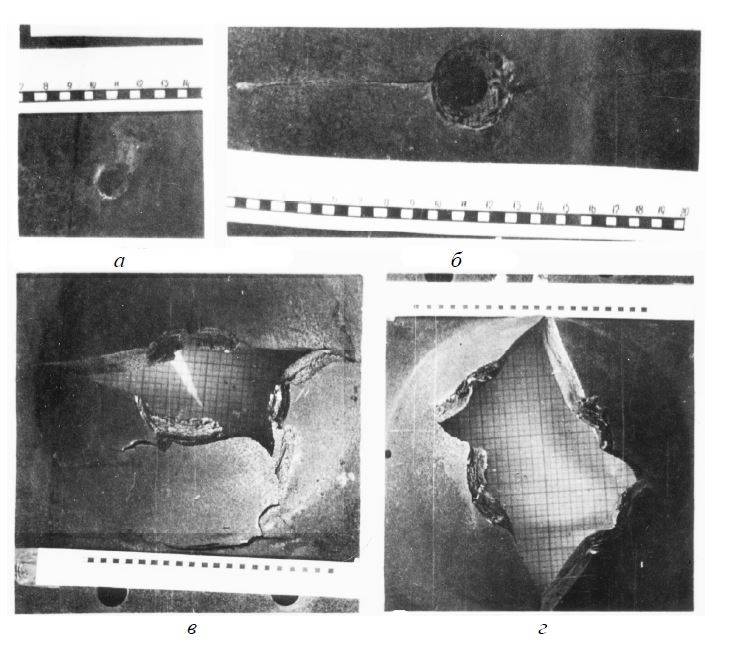 Mathematical calculations showed that it is possible to sink such a difficult target as a Los Angeles submarine at half the maximum depth by making a hole with a diameter of 180 mm in the skin, and at a shallow 50-meter depth, the width of the hole should be no less than 350 mm That is, the diameter of the cumulative charge in this case expands to 500 mm - and this is the minimum possible option. Only such a torpedo, which can no longer be called small-sized, can guaranteedly sink a nuclear submarine missile carrier. Only now small-sized torpedoes with a cumulative charge now have a diameter of only 324 mm, which even in the most successful outcome of an attack will form a through hole in Los Angeles with a diameter of only 75 mm.

Among the domestic developments in the 324-mm form factor, the small-sized anti-submarine stands out aviation torpedo TT-4 with a mass of explosives of 34 kilograms. In domestic cumulative torpedoes, TNT-TNT and TNT-Octogen explosive compositions with powdered aluminum are used as a charge: mixtures of MS-2, MS-2C, TG-40, THFA-30 and TOKFAL-37. Such explosives have relatively low detonation and density parameters, but high calorific value and fire and explosion safety.

Cumulative high-explosive combat charge compartments of small anti-submarine torpedoes: а - torpedo МВ-90 Umpact (France, Germany, Italy); b - SeaPike torpedo project (Germany). Source: Izvestia RARAN
In NATO countries, similar torpedoes of the Mk-46 modification 5A, containing 44,5 kilograms of the powerful blasting high explosive explosive PBXN-103 or PBXN-105, as well as expensive copper conical cumulative lining, were widely used. The torpedo allows you to approach the head of the submarine to orient the head part along the normal, or close to the perpendicular direction. Since 1997, serial joint Franco-German-Italian production of the small-sized cumulative torpedo MU-90 Umpact with a diameter of 324 mm has been carried out. In this munition, according to various sources, from 32,8 to 59 kg of explosive is stored, as it is assumed, made on the basis of triaminotrinitrobenzene. The next in the regiment of 324-mm torpedoes is the advanced Stingray with 45 kilograms of explosives of the PBX-104 type and the traditional already copper conical lining of the cumulative warhead. This torpedo is also equipped with a positioning system for the warhead, which ensures that the ammunition is brought to a course perpendicular to the surface of the submarine's hull. 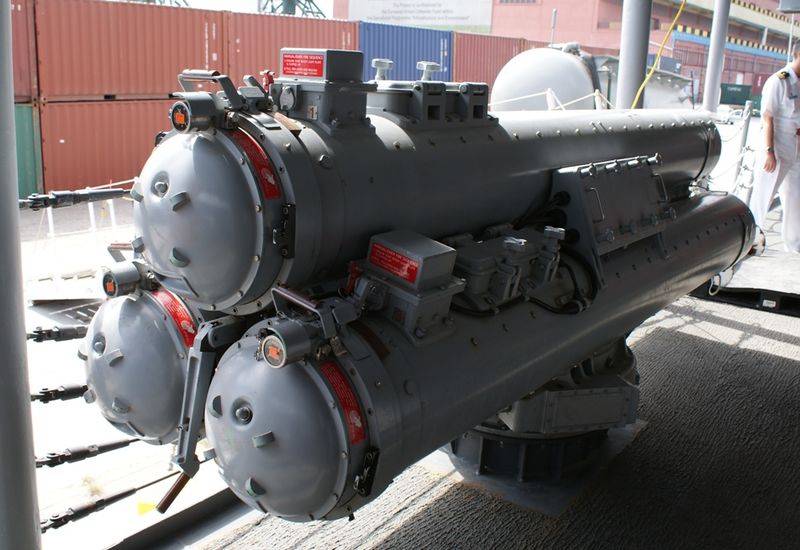 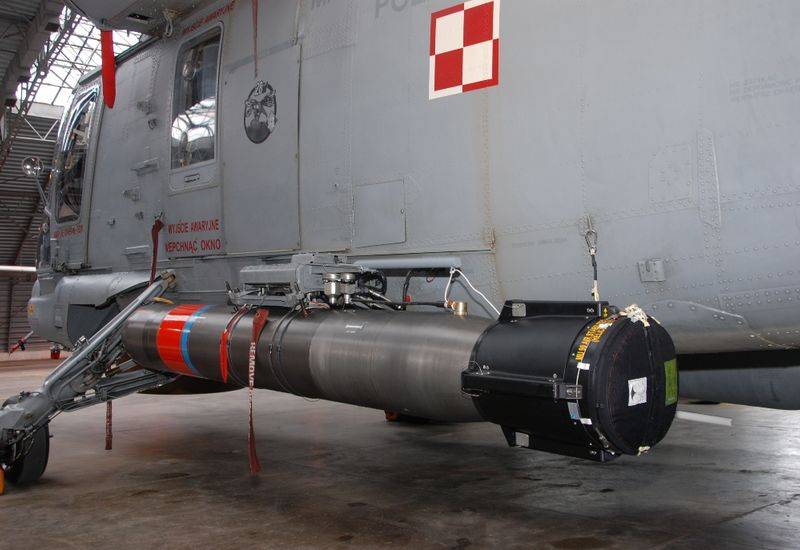 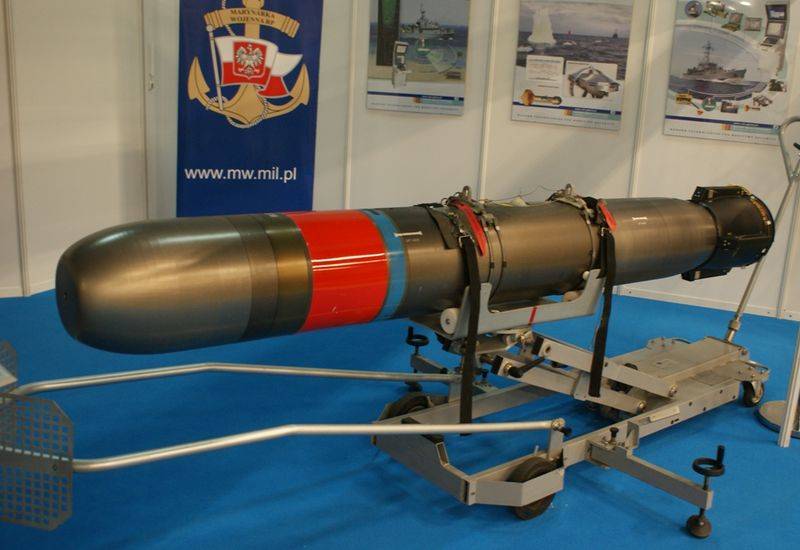 324 mm small torpedo MU-90 Umpact. Photo: defense24.pl
However, all of the presented cumulative torpedoes have one common drawback - the presence of the head instrument compartment, which contributes to the dispersal of the cumulative jet. That is why the development of torpedoes with a transverse arrangement of a cumulative charge is of particular importance, as mentioned above. Naturally, engineers are trying to enhance the power of the cumulative charge with additional high-explosive effects. This allows in addition to a narrow through hole to form dents on the surface of the submarine with extensive steel ruptures, which can be fatal for the submarine. Another way out of the situation could be the strengthening of the backward action of cumulative torpedoes when explosives are brought into the hole, or others, as they are called, “active materials”. However, this approach has not yet received a more conceptual and real embodiment. This problem is partially solved by giving the cumulative cladding the shape of a meniscus, which makes it possible to form a shock core during detonation. As you know, such a core will leave a hole in the skin of a submarine serious and will destroy a lot inside the hull, but the penetration depth leaves much to be desired. As an option, the Russian torpedo TT-4 uses a combined cone and sphere lining, which makes it possible to obtain a hybrid jet with a large penetration depth and a small focal length, as well as a relatively large hole diameter.

Based on materials from the periodical "Izvestia RARAN".

We are in Yandex Zen
"Svetlana". History of creation
Submarine "Lamprey"
68 comments
Information
Dear reader, to leave comments on the publication, you must to register.