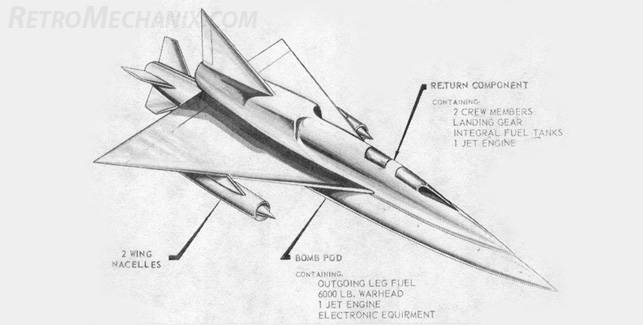 One of the options for the appearance of a GEBO bomber with a hanging container. Drawing Secretprojects.co.uk

In 1956, the Convair B-58 Hustler bomber made its first flight. It was the world's first long-range bomber capable of developing supersonic speed. It was the result of lengthy work under the GEBO research programs, of which Convair was an active participant. It was in the course of research that the main technical features of the future bomber were determined, including a number of its distinguishing features.

The GEBO (Generalized Bomber Study) program was launched in 1946 and was intended to search for basic ideas and solutions needed during construction aviation new generation technology. The program attracted all major aircraft manufacturers and research organizations in the United States.

The result of GEBO was the formation of requirements for new long-range bombers. Given the strategic challenges and the specifics of the alleged war, the researchers proposed the construction of a supersonic aircraft with a long flight range and the possibility of refueling. He had to carry conventional and nuclear weapons with the priority of the latter. GEBO also resulted in technical recommendations necessary for the construction of the desired machine.

In March 1949, the military launched the GEBO II program, the purpose of which was a more detailed study of the future aircraft. Based on its results, full-fledged technical design could begin. At this stage, the participating companies made their technical proposals suitable for further development. 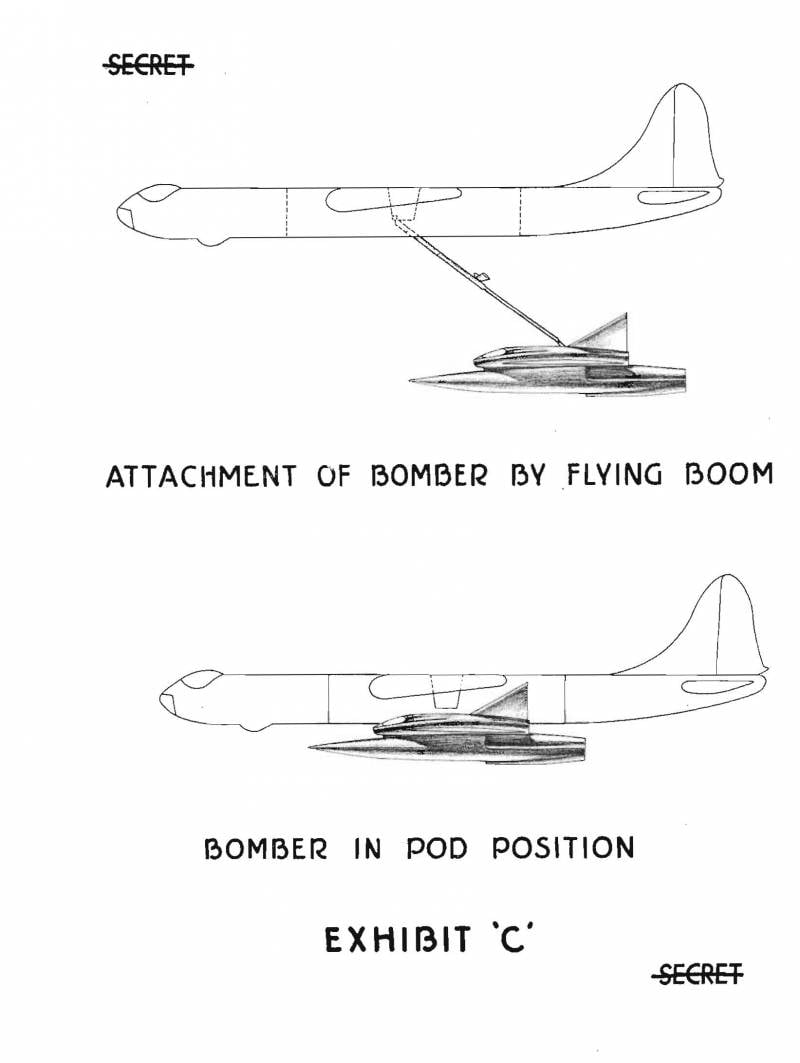 Principles of interaction with a carrier aircraft. Drawing Secretprojects.co.uk
In the years 1949-50. Convair company proposed and several times finalized its version of the long-range bomber in accordance with available technologies and the wishes of the customer. In January 1951, an order appeared to develop the MX-1626 project. The terms of reference for this project provided for serious differences from previously proposed designs. Most of the most daring ideas were rejected, and the military demanded to build a traditional-looking bomber with high performance.

The final result of these works was the B-58 aircraft. He first flew in 1956, and in 1960 entered service with the Air Force. Despite a serious redesign, this machine had similarities with the previously proposed GEBO II project.

During the GEBO II program, Convair found the optimal look for the aircraft that meets the requirements. However, the technology of that time did not allow to obtain all the desired characteristics, and therefore the developers had to look for alternative ways and solutions.

The main problem was the combination of high range with cruising supersonic speed, since the proposed engines were not economical. In addition, difficulties arose with the deployment of large and heavy nuclear munitions in the internal cargo compartment or on the external sling. There were other difficulties. 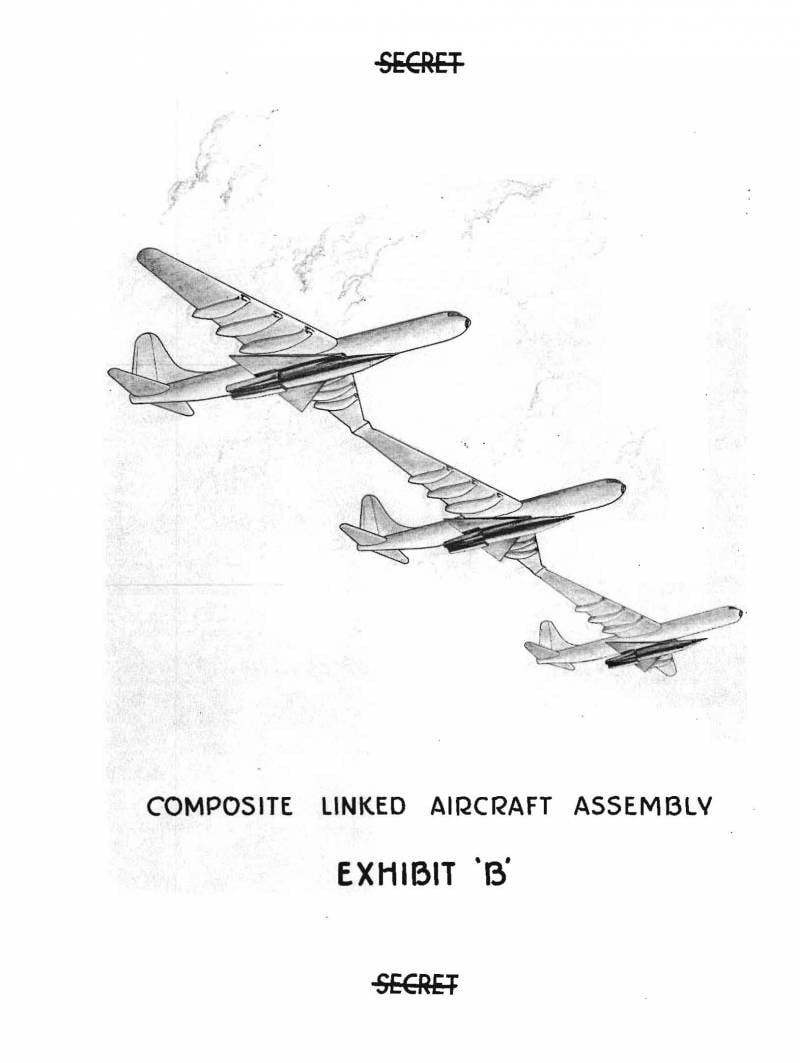 A way to save fuel is to fly several carriers together. Drawing Secretprojects.co.uk
In this regard, a proposal appeared to create a composite aviation complex, the various components of which were responsible for solving their problems. The Convair GEBO aircraft was proposed to be built according to the "parasitic scheme." It was supposed to be carried by a B-36 serial bomber. It was planned to attach a special large-sized container bomb to the GEBO with a nuclear warhead, an additional fuel tank, etc.

Actually, the GEBO bomber was proposed to perform in the form of an airplane a tailless scheme with a triangular wing, keel and large elongation fuselage. The power plant included three turbojet engines - two on pylons under the wing and one in the tail. Subsequently, it was repeatedly processed, both by engine type and layout. The airframe was supposed to receive funds for docking with a carrier in the form of a B-36.

Restrictions on size and weight associated with the characteristics of the carrier forced the designers to use the original method of transporting weapons. A nuclear or thermonuclear warhead was placed in a hanging container, designed to be installed under the bottom of the GEBO. Together with the charge there was an additional fuel tank to increase the range of independent flight. The possibility of equipping the container with its own engine was considered.

It is curious that the container was longer than the plane, and its diameter exceeded the diameter of the fuselage. Including due to this, it was possible to bring the combat load to 2700 kg, which was enough to accommodate promising special charges.

According to Convair, the B-36 was supposed to take off with the GEBO bomber in a half-sunken position inside the cargo bay. The task of the carrier was to deliver a supersonic machine to the discharge area. Next, GEBO was supposed to free itself from the carrier, using all its engines to develop high speed and carry out a breakthrough to the target. After dropping the container from the warhead, he could return to the base and land on his own. 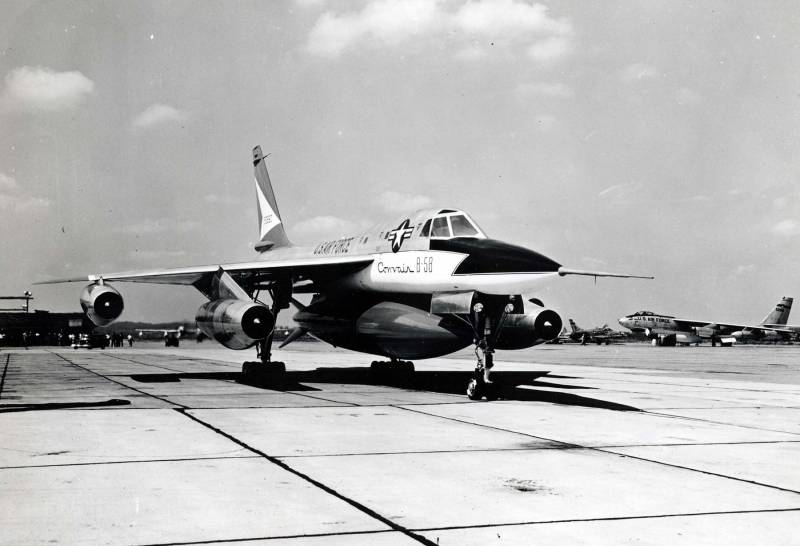 Experienced bomber XB-58 - when it was used, developments on GEBO were used. Photo US Air Force
The presence of a carrier aircraft with high flight characteristics made it possible to obtain a high range of the entire complex. On board the GEBO there was a limited fuel supply, but the tank inside the container allowed to increase the flight range. The return flight should be carried out only at the expense of its own fuel, possibly with trans- or subsonic speed.

Key GEBO requirements related to range and combat radius. Calculations showed that the use of a composite system with a carrier aircraft and a “parasite” allows one to obtain good characteristics, but they turned out to be insufficient to defeat all assigned targets in the territory of a potential enemy. This issue was planned to be addressed in several ways.

The most obvious solution was in the field of engines. Equipping GEBO with more efficient engines saved fuel and increased range. Both the bomber and its hanging container could undergo such modifications.

It was found that a half-sunken aircraft with a container under the bottom significantly spoils the aerodynamics of the carrier. Substantial processing of the B-36 was not possible, and therefore a different proposal appeared. The carrier aircraft should have been equipped with special docking mechanisms at the wingtips. In this configuration, the B-36 were supposed to take off in triples and connect with each other, combining fuel systems. Extreme aircraft had to turn off the engines and fly at the expense of the central one. Such a "built" carrier aircraft lost to individual machines in flight speed, but could show an increased range.

However, the offer of docking media did not receive customer support. Improving the design of the GEBO bomber itself looked more promising and convenient from all points of view.

Transition to a new project

At the beginning of 1951, several companies, including Convair received an order to develop projects based on the ideas and solutions of the GEBO II program. Soon, an updated version of the tactical and technical requirements appeared, imposing certain restrictions. The Air Force demanded to abandon the complex architecture of the complex in favor of a traditional look. At the same time, it was necessary to obtain high performance achievable using available technologies. 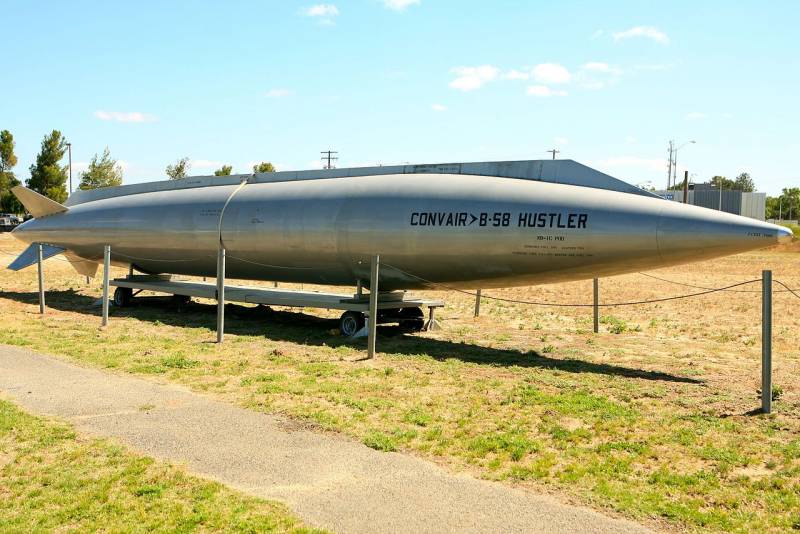 A hanging container with a tank and warhead for the B-58 is perhaps the main practical result of the GEBO program. Wikimedia Commons Photos
In February 1953, the customer compared the submitted projects and chose the most successful one. Convair received a contract for the technical design and construction of the prototype. Her plane received the designation B-58 and the name Hustler. In 1956, the new car made its first flight.

From the “paper” project of GEBO II to the real B-58, several important ideas passed. The constructed aircraft was larger and heavier than the drawn one, but retained the characteristic contours, the general scheme and the delta wing. It also used a dumpable container with warhead and fuel tank. The widest possible use of ready-made developments in on-board equipment.

The result of GEBO research and subsequent work was the emergence of a strategic supersonic normal-looking bomber with high performance. The rapid development of aviation and the emergence of new technologies made it possible in just a few years to move from bold but overly complex ideas to creating a full-fledged aircraft with the desired level of performance characteristics. However, a number of original solutions have successfully reached practical implementation.

We are in Yandex Zen
The first serial supersonic bomber Convair B-58A Hustler
An-12 in Afghanistan
14 comments
Information
Dear reader, to leave comments on the publication, you must to register.