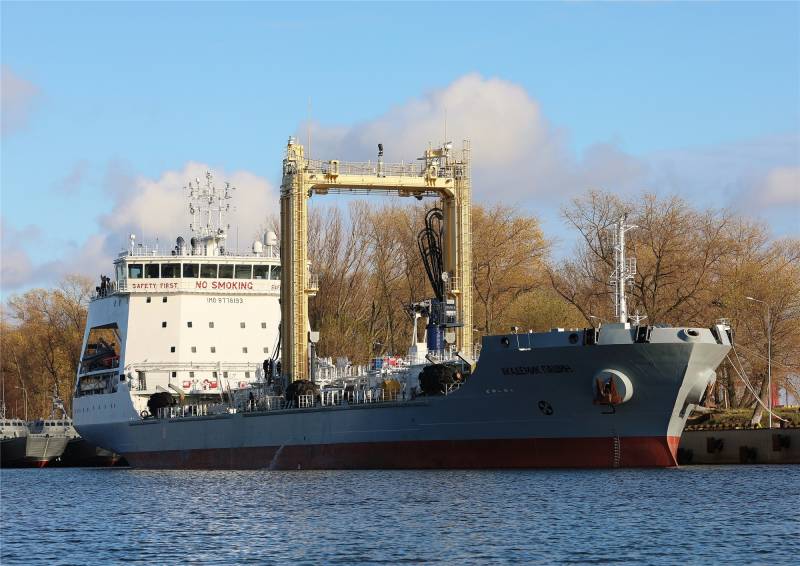 On January 21, 2020, in a solemn ceremony, the auxiliary flag was raised fleet Russian Navy on a new support ship - the medium-sized marine tanker Akademik Pashin. From this day on, the tanker of project 23130 is officially part of the Northern Fleet. Vice Admiral Alexander Moiseev, the commander of the Russian Northern Fleet, took part in the flag-raising ceremony. According to the admiral, the fleet represented by the medium tanker of project 23130 received a universal logistics support vessel. This ship will significantly expand the possibilities of using the surface forces of the Northern Fleet in the World Ocean far from permanent basing points.

The average marine supply tanker Akademik Pashin was built at the shipyard in Shlisselburg (Leningrad Region) at the facilities of the Nevsky Shipbuilding and Shiprepairing Plant (NSSZ). The supply ship project was created by specialists of Spetssudoproekt CJSC from St. Petersburg. The main field of activity of the company is military shipbuilding and shipbuilding. The new auxiliary fleet ship was originally designed and built under the state contract in the interests of the Russian Defense Ministry.

The medium-sized marine tanker, named Akademik Pashin, became the first ship of Project 23130. It is already known that five more serial ships of the same project will be later built for the Russian Navy. Sergei Epifanov, a senior official from the Department of Transport Support of the Russian Ministry of Defense, has already spoken about the military’s plans to build a series of such tankers. According to him, the decision to build another five marine tankers has already been made. According to Epifanov, in 2024 another ship built according to project 23130 will be handed over to the Northern Fleet of Russia. According to experts, this tanker currently has no analogues in Russia.

The first ship built under the project 23130 was named "Academician Pashin" in honor of the famous Russian shipbuilding engineer Valentin Mikhailovich Pashin. Valentin Pashin - Hero of the Russian Federation, academician of the Russian Academy of Sciences. For more than two decades, he headed the Central Research Institute named after Academician A.N. Krylov. Valentin Pashin is the author of more than 150 scientific publications on the design of ships, as well as a huge number of inventions. After the death of the designer in 2013, the square in St. Petersburg was named after him, and later the average marine tanker of the auxiliary fleet was named after him.

Hard way to the fleet

January 21, 2020, in fact, ended история Another Russian naval long-term construction. The ship, like the ships of many other projects, suffered from the sanctions imposed on Russia. Initially, the main power plant of a medium-sized marine tanker was to include diesel engines of the Finnish industrial company Wartsila. A substantial part of the auxiliary equipment on the ship also had to be imported. After 2014, such deliveries were impossible, the result is a significant lag behind the contract terms. The ship was built three years longer.

For the first time, plans to build a series of tankers on the basis of project 23130 developed by specialists of the St. Petersburg CJSC Spetsudoproekt became known in early 2013. The contract for the construction of a medium sea tanker of project 23130 was signed on November 1, 2013, the contract cost in 2014 prices amounted to 2,978 billion rubles. The construction of the first ship at the Nevsky Shipbuilding and Shiprepairing Plant began in February 2014 with the acquisition and cutting of metal, the laying of the ship took place in April of the same year. 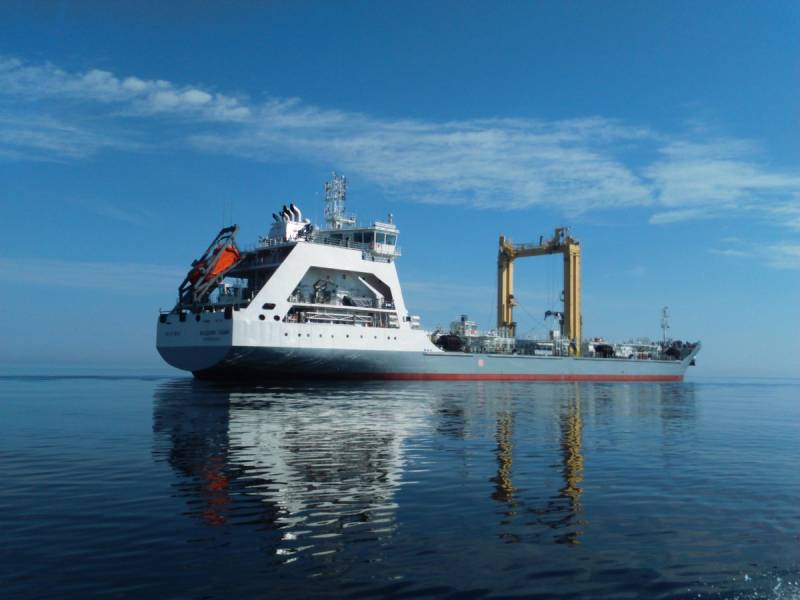 Photo: forums.airbase.ru
According to the initial plans, the launching of the vessel was supposed to take place in July 2015, and the completion of all necessary factory running, as well as state tests, was scheduled for October 2016, with the subsequent transfer of the ship to the customer on November 25, 2016. However, in fact, the construction of the ship took place with almost a three-year delay from the original terms stipulated in the contract. The tanker was launched on May 26, 2016, factory sea trials, which were carried out in Lake Ladoga, began in May 2018, and the ship arrived in Murmansk to complete the final stage of state testing only on July 22, 2019.

January 21, 2020 in the history of the construction of the ship was put an end. The ship was finally handed over to the customer and included in the Russian fleet. One can only hope that the construction of subsequent ships of the series will not be accompanied by such a time lag. All the prerequisites for the next five tankers of Project 23130 to be built on time are currently there.

Technical characteristics of the tankers of project 23130

The new auxiliary fleet ship is a medium single-deck marine tanker with a bulbous bow and transom aft tip, with tank and utah superstructures. It is worth noting that the nasal bulb (from the French word bulbe, bulb) is an important part of the vessel located below the waterline and having a convex ellipsoid shape. Bulb is an important part of large ships, it changes the direction of water flow throughout the hull, reducing resistance, which in turn directly affects the increase in sailing range, fuel economy and increase speed. According to modern estimates, the nasal bulb provides a gain in fuel economy of about 12-15 percent compared to vessels without it. In turn, transom stern is characteristic of all tankers, this type of stern involves a flat section in the underwater part, straight lines in plan and vertical plane. 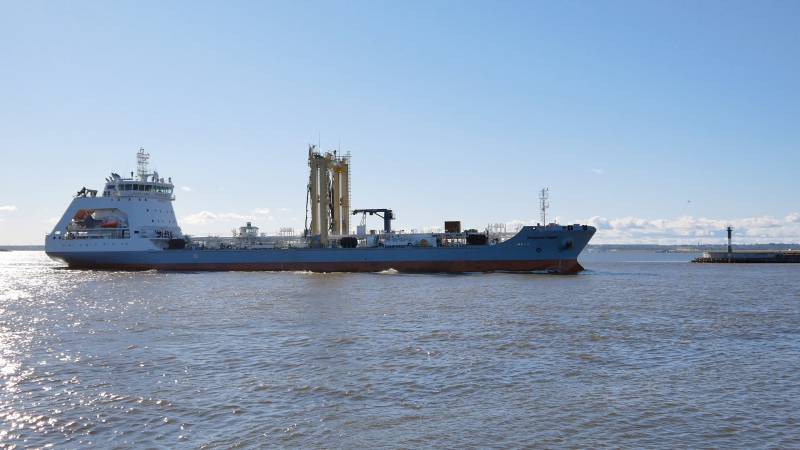 In the freight area tanks implemented double steel case. The cargo hold on tankers of project 23130 is located in the middle of the ship, the living superstructure and the engine room are in the aft. The heart of the ship is a single-shaft diesel power plant, developing a maximum power of up to 9500 kW (approximately 12 hp). To improve maneuverability, the ship has a bow thruster. The capacity of the main power plant is enough to disperse a ship with a total displacement of about 900 tons to a speed of 12 knots.

The deadweight of the ship is approximately 9000 tons with draft on the cargo waterline. The tanker reaches 130 meters in length, the ship is up to 21,5 meters wide, and the largest draft is about 7 meters. The autonomy of the medium sea tanker of Project 23130 in terms of provisions and drinking water is approximately 60 days. Maximum cruising range 8000 nautical miles. Residential and office premises for the crew of the tanker, as well as passengers, are in the aft residential cabin, the total number of seats on board the ship is 36 (24 people - a permanent crew + up to 12 seconded guests).

Opportunities for tankers of project 23130

According to the official website of the manufacturer, the average marine tanker of project 23130 has an unlimited navigation area. Independent navigation of the ship in areas of the non-Arctic seas is unlimited. The ship itself corresponds to the Arc 4 ice reinforcement category. This ice class guarantees the average sea tanker the possibility of independent sailing in rarefied annual Arctic ice with a thickness of up to 0,8 meters in summer-autumn and up to 0,6 meters in winter-spring navigation. Also, a tanker can sail in the canal behind the icebreaker in annual Arctic ice up to 1 meter thick in summer-autumn navigation and up to 0,7 meter in winter-spring. Thus, in summer-autumn navigation, the ship can independently sail in the Barents Sea. 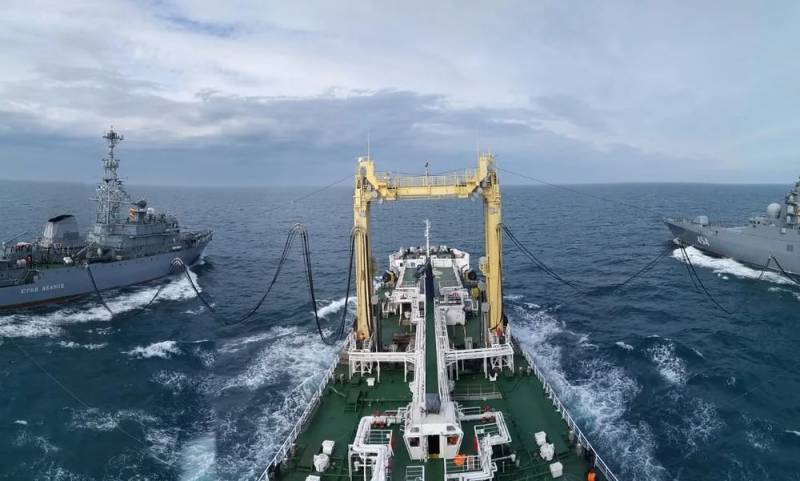 The main purpose of the medium sea tanker of project 23130 is the reception, storage, transportation and transfer of various liquid cargoes for the fleet, in the first place: naval fuel oil, diesel fuel, engine oil, aviation kerosene, and fresh water. It is also possible to transport dry goods, including various technical and skipper property, food stocks. In order to ensure safety and for localization in the event of accidents of oil and oil products spills, there is an emergency boom on board the ship, the total length of which is from 200 to 400 meters.

The new Russian tanker received all the necessary equipment and devices for transferring both liquid and dry cargoes to ships and vessels at sea. In this case, the transfer process is possible wake and traverse method directly on the go. In one trip, an average marine tanker of project 23130 can take up to 3 thousand tons of fuel oil, 2,5 thousand tons of diesel fuel, 500 tons of aviation kerosene, 150 tons of lubricating oil, up to 1000 tons of fresh water, as well as 100 tons of food and various equipment and spare parts .

During successful state trials, the new Northern Fleet tanker confirmed its improved tactical and technical characteristics, as well as enhanced capabilities for transferring liquid and dry cargoes to Russian surface fleet combat ships directly to the sea. According to Vice Admiral Alexander Moisev, during the tests, the tanker first made the simultaneous refueling of three warships at once. Tanker tests were carried out in 2019 in the Barents Sea and were recognized as fully successful.

We are in Yandex Zen
Destroyers Ave 956. Overview of the technical condition
"Svetlana". History of creation
51 comment
Information
Dear reader, to leave comments on the publication, you must to register.