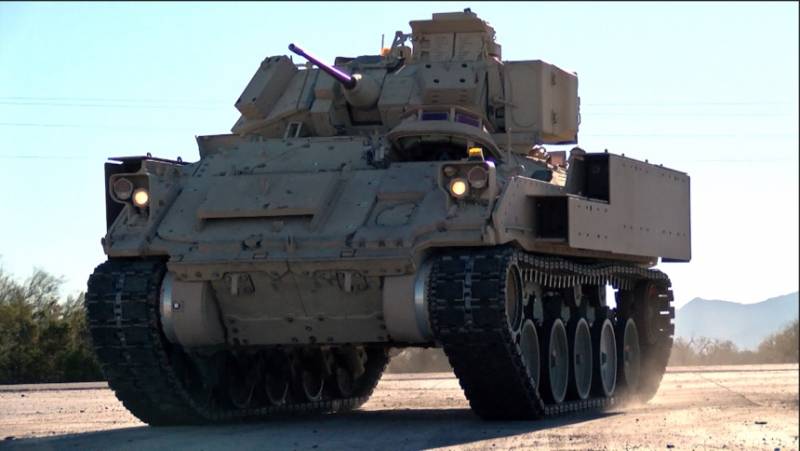 Since last year, the United States has been testing an experimental M2 Bradley infantry fighting vehicle with a revised chassis. The standard torsion bar suspension was replaced by a hydropneumatic system with other characteristics and capabilities. The purpose of the current tests is to collect data that in the future will allow the use of hydropneumatic suspension when creating completely new models of armored vehicles.

The American media first spoke about the new experimental version of the "Bradley" in July last year. Then it was reported that at the Yuma Proving Ground range, tests of the M2 IFV with a modified chassis are being carried out. Details of a technical nature were not specified, but data on new capabilities of the equipment were provided.

It was argued that due to the processing of the chassis of the BMP, it can change the clearance. In addition, new units should reduce shaking when driving, increase speed on the road, etc. Soon, believable versions appeared in the press describing the technical part of the project.

New messages about the project appeared a few days ago. According to them, the prototype still remains in full-scale sea trials. The car regularly makes hours-long trips and overcomes a variety of routes. Such events take place four times a week and last for seven hours.

The specialists of the landfill named the goals of the project. The experimental version of the M2 is needed to test the technologies proposed for use in a fundamentally new project of a combat vehicle. The latter is still in the early stages of development, but individual systems and components are already being tested in real conditions. 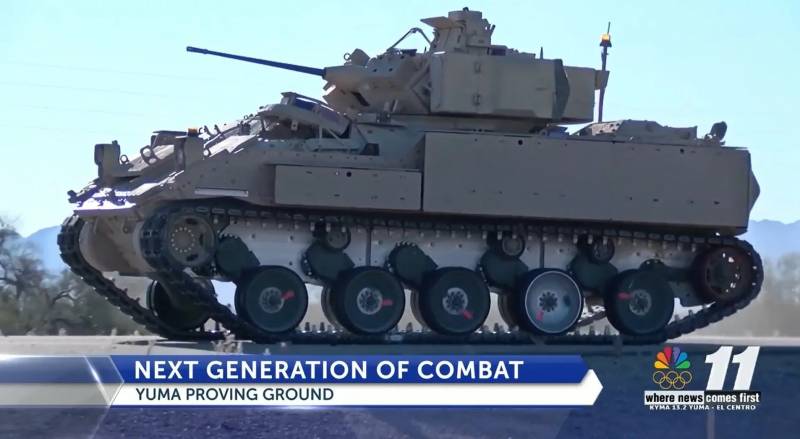 Photo: kyma.com
However, the promising armored vehicle will not receive the same suspension as the experienced M2 Bradley IFV. The chassis for it will be redesigned - albeit using the best practices and accumulated experience. The timing of the appearance of such a design is not specified. Also, the time required for testing the experimental Bradley remains unknown.

The basic principles of the pilot project were not officially disclosed, but they are already clear. The declared suspension capabilities indicate the use of hydropneumatic systems instead of the standard torsion bars. Based on these data and the well-known images of the experimental BMP, specialized foreign resources compiled a plausible version of the origin of the tested suspension.

It is assumed that the M2 is equipped with a hydropneumatic suspension, created in the past by Horstman Holdings Ltd. This system was created for use in two programs for the development of armored vehicles - the British Future Scout and Cavalry System (FSCS) and the American Future Combat System (FCS). As you know, both programs did not give a real result, and the suspension from Hortsman, along with a number of other developments, remained out of work.

Not so long ago, the FSCS and FCS developments were decided to be used again - as part of another promising project. A prototype with such a suspension was built and tested, and in parallel, the design of a completely new armored car, which initially had a similar chassis, was underway.

Published materials show what changes the serial M2 Bradley BMP has undergone during its transformation into a prototype. It is easy to see that the bulk of the machine's units remained in their places and did not change. At the same time, part of the design was substantially redone in accordance with the new requirements. 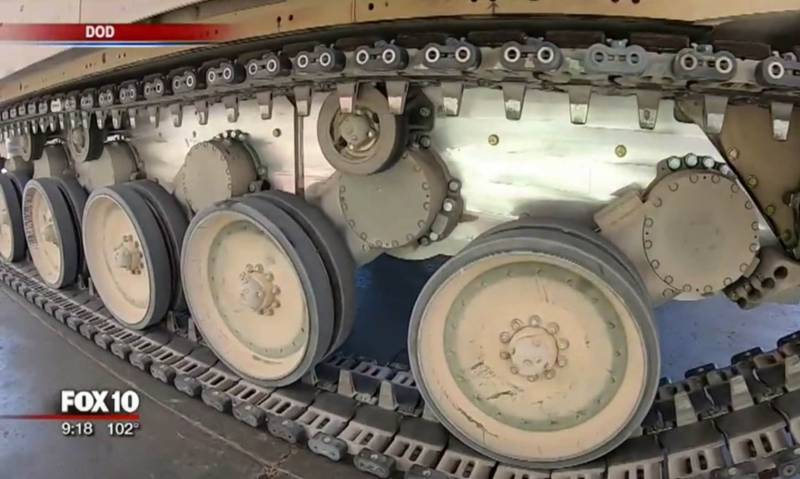 Photo: kyma.com
The standard suspension with all its external and internal units was removed from the experimental machine. On the bottom of the sides with holes for the torsion bars and fixtures installed overhead sheets with a new set of seats. First of all, this is due to a change in the architecture of the chassis: after the alteration, the chassis has five rollers on board instead of the original six.

Outside the enclosure are now characteristic large balancers with track rollers. The chambers for oil and compressed gas from the hydropneumatic suspension are located directly in the balancers. Inside the body, only piping and other equipment are mounted.

The new suspension is made manageable and allows you to change the clearance, although the range of its values ​​was not called. Other characteristics are also not published - testers prefer to simply speak about the various advantages of an experimental suspension.

With all these changes, the bulk of the M2 BMP units remained in place. As a result, the dimensions and weight of the machine have not changed. Also remained the same power plant with a diesel power of 600 hp. Thanks to this, it became possible not only to evaluate the parameters of the new suspension, but also to compare the characteristics of armored vehicles in standard and experimental equipment.

At the moment, several advantages of the experimental M2 BMP are identified over the equipment with the original torsion bar suspension. First of all, we are talking about the increase in driving characteristics. The hydropneumatic system better "fulfills" bumps and reduces shaking of the car with a negative impact on the crew and on-board systems. There is also the ability to control the suspension. By changing the pressure in the hydraulic and pneumatic chambers, the crew can adjust the ride height and suspension stiffness in accordance with the terrain.

All this allows to improve cross-country ability and dynamics. In particular, an increase in the maximum speed on impassability is declared - although the exact value of this parameter is not called. It is known that the "Bradley" with torsions accelerates off-road to 40 km / h. Probably the experimental BMP develops at least 40-45 km / h. 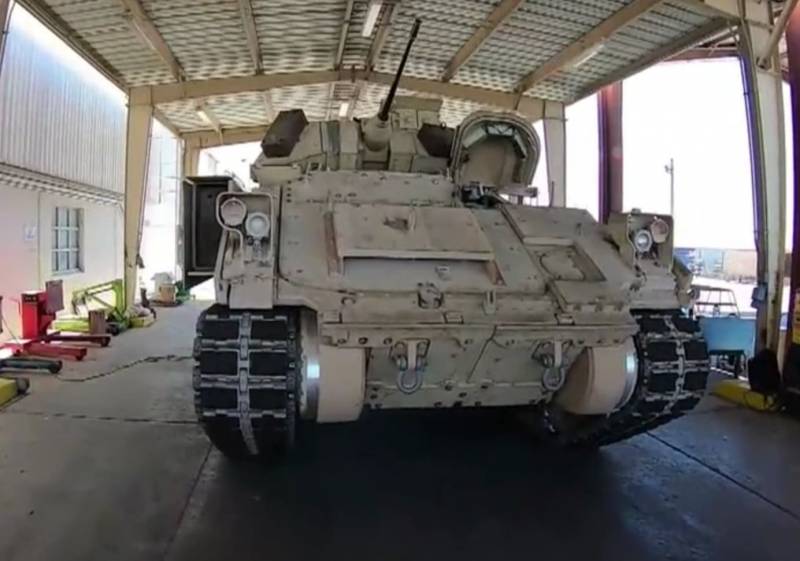 Photo: kyma.com
The Hortsman development pendant has an original layout with cameras located inside the balancer. As a result, only individual units remain inside the housing without special layout requirements. There is an opportunity to more successfully assemble the units inside the armored car and make more efficient use of the available space.

The new suspension should also improve the survivability of the car. In the event of an explosion under the caterpillar, the balancer and the roller should be torn off from their place without causing special damage to the body. Torsion bar suspension in such a situation can harm both the car and its crew.

However, there are also disadvantages. The main one is the complexity and high cost of production. The standard torsion bar suspension for M2 includes several fairly simple parts, while the experienced hydropneumatic system consists of more complex components and devices. All this turns out to be a fee for improving the performance and gaining new opportunities.

Experiments with the experimental M2 Bradley infantry fighting vehicle are carried out in the interests of the further development of the ground forces armored vehicles. Now the relevant army structures are working on the creation of new models of armored combat vehicles and are testing individual decisions and even ready-made systems.

Curiously, plans for hydropneumatic suspension have already been identified. Such a system is used in a new project, but it will be developed from scratch, albeit with the application of accumulated experience. Probably, the system from Hortsman in its current form was considered outdated or unsuitable for use outside of the tests. At the same time, its basic principles and the opportunities obtained, apparently, are completely satisfied with the military.

While the army continues to test the experimental version of the "Bradley" and collects the necessary data. When exactly the experience of these tests will begin to be introduced into the project of a new armored combat vehicle is unknown. In addition, given the experience of previous programs for the ground forces, one can doubt the possibility of its occurrence. However, so far everything is going according to plan, and a prototype based on a serial BMP is coping with the tasks.

We are in Yandex Zen
Is the old well forgotten to become the new? Part-2. By call of honor and duty
Tanks "Abrams" and BMP "Bradley" in the operation "Desert Storm"
17 comments
Information
Dear reader, to leave comments on the publication, you must to register.