Silencers? In fact, they do not exist! 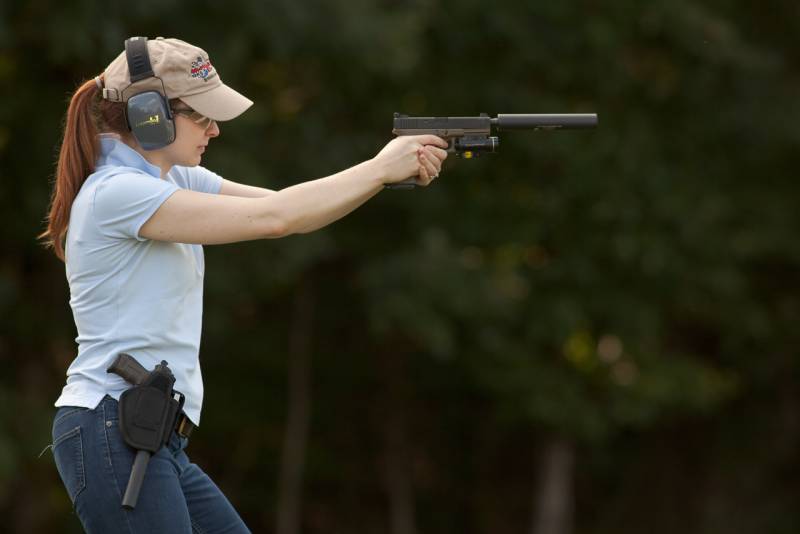 Many people know almost nothing about silencers for the rifle weapons. All of their information in this matter is gleaned from numerous films and computer games.


The silencer never suppresses the sound of a shot completely. The ideas of many ordinary people about such a device and its operation are based primarily on the work of sound engineers. Many imagine a shot from a weapon with a silencer as a barely audible sound, but this is nothing more than a sound effect. Real silencers for small arms are devices that really reduce the sound of a shot by several tens of decibels, but far from completely, protecting the shooter from the sound of a shot, first of all.

The classic weapon silencer is a special muzzle mechanical device that can be used with various models of small arms. The silencer is attached to the barrel, or is initially an integrated part of the design of small arms. The main purpose of this device is to attenuate the sound of a shot, while at the same time the silent shooting device (PBS, an abbreviation common in Russia) also hides the flame of powder gases, which complicates the process of detecting a shooter and does not attract additional attention to it.

The latter is especially true for the military, as ordinary hunters in the woods or amateur shooters at the shooting range do not need to hide. But the military, when conducting military operations at dusk or at night, is more afraid not of the sound of a shot, which is uninformative in the dark, but of bright flashes and sparks. From the flashes of a shot, the shooter can be very easily detected, and he will quickly turn into a good target for enemy soldiers. Therefore, for the military, it is the concealment of the flame of powder gases during firing that is a much more useful function of all silencers. 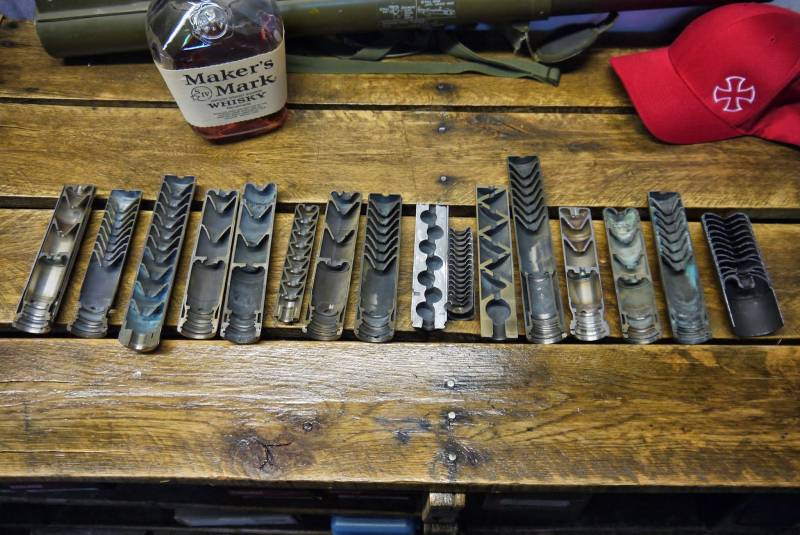 Sectional silencers
At the same time, such a device has other useful qualities, for example, increasing the accuracy of fire. Experts note that both the machine gun and the rifle with a correctly installed silencer demonstrate better accuracy of fire than without such a device. At the same time, the return of weapons is also reduced. All this together makes PBS very popular in the civilian market in countries where their sale is allowed.

A classic silencer most often looks like a hollow cylinder made of various metals: steel, copper or aluminum, in some cases shockproof plastic is used. Inside such a cylinder, designers placed special chambers designed to remove powder gases. In the vast majority of cases, the silencer is screwed to the end of the barrel of a small weapon using a thread specially made for this.

All types of silencers, including those integrated into the weapon design, reduce noise, which is the result of a shock wave of an ignited charge, which creates a force that pushes a bullet out of the barrel. At the time of the shot, the resulting gases enter immediately into several chambers located one after another inside the muffler. In these cameras, they lose speed, while expanding and cooling. Due to this, the gases exit the muffler, significantly losing their speed.

Nowadays, not everyone agrees with the very definition of a silencer (English silencer), for example, the term “suppressor”, which some experts consider to be more accurate, has gained popularity in the world. From the English word suppressor (translated as "suppressor"). At the same time, in many countries, devices for reducing the sound level of a shot are allowed for sale even on the civilian market. For example, such devices are allowed for free circulation in 42 US states. At the same time, in Russia at the legislative level, any devices for silent shooting are prohibited for sale on the civilian market.

Quite a lot is said that the “silencer” is not the best term for designating devices for silent shooting. For example, one of the episodes of the very famous American popular science program “Legend Destroyers” was dedicated to debunking the layman’s television performance about such devices. To do this, they used weapons chambered for .45 (11,34x23 mm) and a 9 mm pistol. Three shots were fired from each weapon sample, recording sound with the help of a professional sound engineer, a specialist in the field of acoustics. The experiment was carried out using devices to reduce the sound of a shot, and without.

The experiment showed that the sound of a shot from pistols without the use of suppressors is 161 dB, and when used, it is reduced to 128 dB. At the same time, the recorded difference of 33 dB is a very significant amount, especially for human hearing, such a reduction in noise makes the sound of a shot safe. At the same time, a normal conversation at a distance of a meter from a person is fixed at 60 dB - this is the basic value of the relative volume. At the same time, the 128 dB that was recorded when shooting using a suppressor is really quieter, but at the same time 115 times louder than the basic conversation of two people located one meter apart from each other. 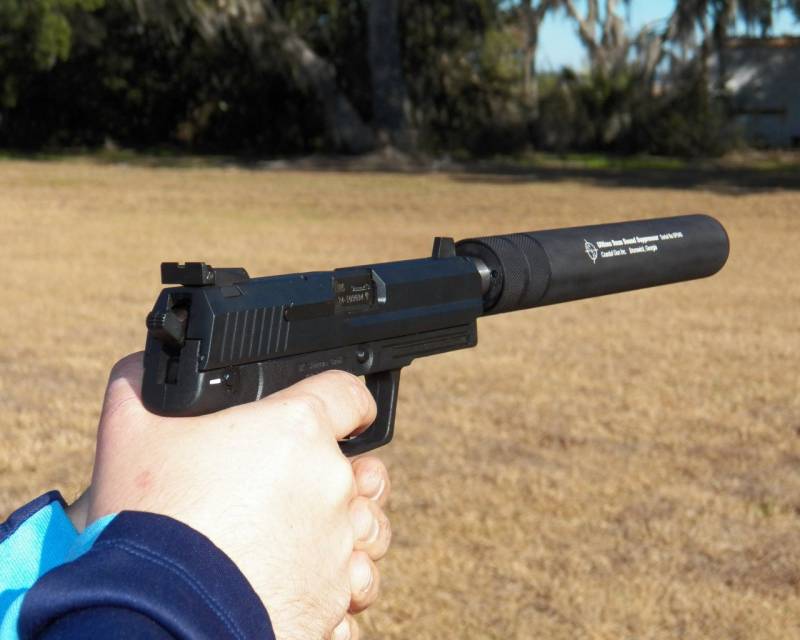 The experiment showed that a person will hear the sound of a shot from a pistol with a silencer as clearly as the interlocutor talking to him, at a distance of 34 feet (10,36 meters), that is, at a distance comparable to the width of a multi-lane city street. Without a silencer, the distance of excellent audibility will increase to 50,5 feet or 15,4 meters.

At the same time, any silencer is not a tool for killers and not a virtually silent device, but it was such an image that was formed thanks to the cinema. In fact, the military and law enforcement officials love such devices for four main reasons: the extra weight on the barrel reduces recoil and rejection of the muzzle upward, which means the arrow is easier to aim and keep the target on the fly; the device also significantly reduces noise, making it safe for the shooter; reduces bullet deflection and completely removes the flash from the shot. Together, all this makes small arms safer, more reliable and easier to use.

Key benefits of using a suppressor for the shooter

As we have already found out, suppressors are of interest to the military primarily as devices that remove the flash and increase accuracy. For ordinary users of small arms, increasing shooting comfort by reducing recoil is also important, but the main advantage and advantage of all suppressors is the protection of the shooter's hearing. For hunters and amateur shooters - this is the main advantage, which many of them do not even know about. Moreover, it is the loud sound of the shot in 2/3 of the cases that leads to a weakening of the hearing level of hunters and shooters, leading to hearing loss. And, for example, in athletes-shooters, doctors record a sharp increase in cases of neuritis of the auditory nerve. 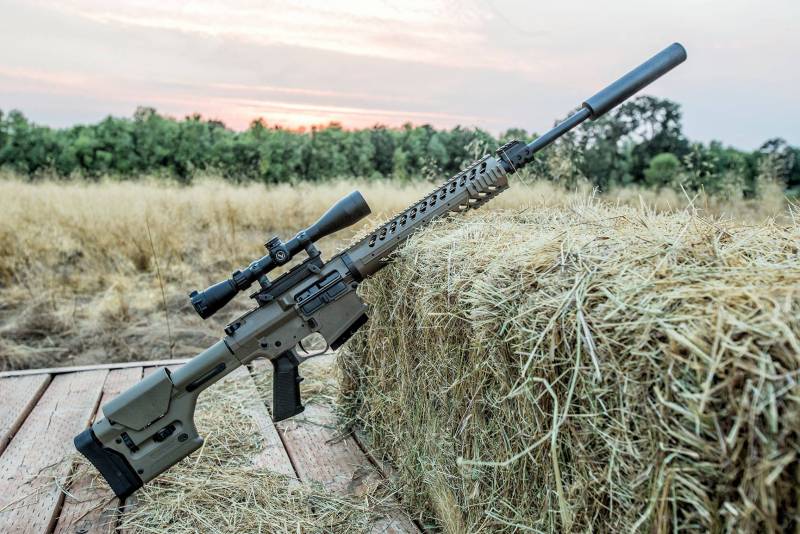 Using a conventional rifle while hunting, we doom ourselves to very loud sounds of shots - usually more than 150 dB. As you know, everything is known in comparison. For example, the sound of a working jackhammer does not exceed 110 dB, and the sound of a siren in an ambulance hurrying to an emergency call does not exceed 120 dB. Using devices to reduce the sound level of a shot allows you to bring the sound to acceptable values, reducing the noise level by 20-35 dB, most often below the threshold value of 140 dB. This value is the upper safe limit in many countries, for example in Germany suppressors should reduce the sound of a shot to no less than 135-137 dB. So the noise level of 160 dB (a shot from a hunting rifle close to the ear) is able to bring a person into a state of shock, the consequence may be a rupture of the eardrum.

Numerous studies speak of the impact of the sound of shots on hearing, it is no coincidence in the shooting range and shooting range, as in competitions, many shooters use individual hearing protection (headphones or earplugs). Shooting without such devices after a certain time can lead to hearing loss, and in the future - to deafness. At the same time, the vast majority of hunters do not use hearing protection even in countries where it is absolutely legal to purchase devices to suppress the sound of shots. They argue this by the need to better hear all the sounds and what is happening around them in the forest. Surveys show that up to about 80 percent of hunters never use hearing protection.

The decision is not the most far-sighted, since numerous modern studies tell us that for every 5 years of hunting, a person has a 7% decrease in hearing acuity. The biggest problems for hunters are manifested in the perception of high-frequency sounds, notes the Russian Hunting Portal. 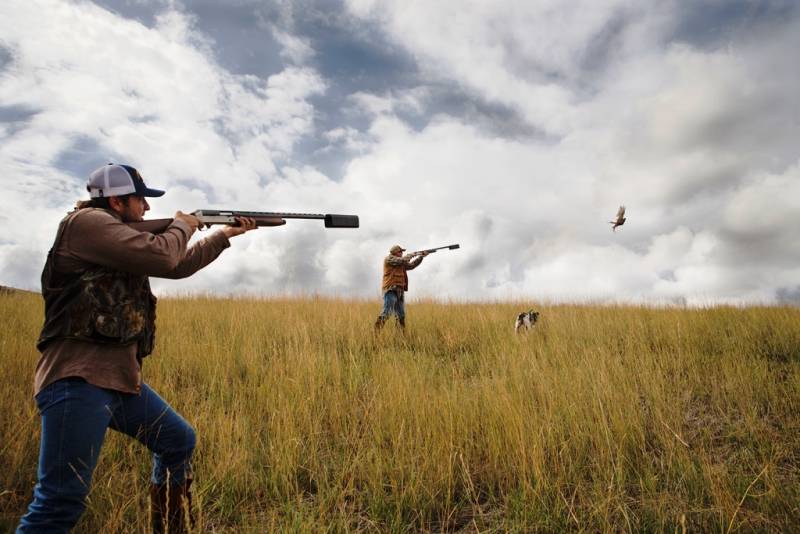 The use of suppressors in the hunt
At the same time, the use of modern suppressors can reduce the sound of a shot by several tens of decibels. This allows you to reduce noise to such an extent as to compare the effectiveness of such devices with the effectiveness of an ear plug or headphone. It is not difficult to notice that what we all used to call a silencer is actually not such a device: the sound of a shot only decreases to a level that is safe for the shooter's hearing. The sound of shooting from small arms is never completely eliminated.

In addition to safety for the shooter's ears, modern suppressors or gunshot suppressors have another advantage. Many shooters notice that firing weapons with a suppressor is more comfortable for them. According to their impressions, the level of return of weapons falls by 20-30 percent, which is a very significant amount.

All this together tells us that suppressors have a very good future, despite the fact that they are banned in some countries. Despite the existing restrictions, the market for such devices is growing and experiencing a real boom, which is demonstrated by numerous arms exhibitions. This does not seem surprising. In some countries they have already been allowed to use during hunting, and they help beginners to overcome the fear of a shot when a person instinctively closes his eyes when pressing the trigger. But most importantly, such devices protect the hearing of hunters, shooters, and hunting dogs well: let's not forget about our smaller brothers.

We are in Yandex Zen
No noise and dust. Muzzle devices for small arms
Sniper fire in local wars
130 comments
Information
Dear reader, to leave comments on the publication, you must to register.