July 21 2012
36
A few days ago, a list of well-known domestic military equipment was added to another type. On July 17, the Military-Patriotic Site “Courage” published the first information on the combat vehicle, designated as the “Intelligence and Control Module Optical MRU-O” combat vehicle, as well as several of its photos, inside and out. The author of the project is the Penza Scientific-Production Enterprise Rubin. Information about the development, according to the authors of the original publication on “Courage”, was taken from an industrial design patent under the number 82323 issued to Rubin in July last year. A year has passed since then, and all the information about the complex was a few scattered and unconfirmed rumors about the existence of some promising machines. Now the existence of such is documented, and photographs and a short description are made available to the general public. 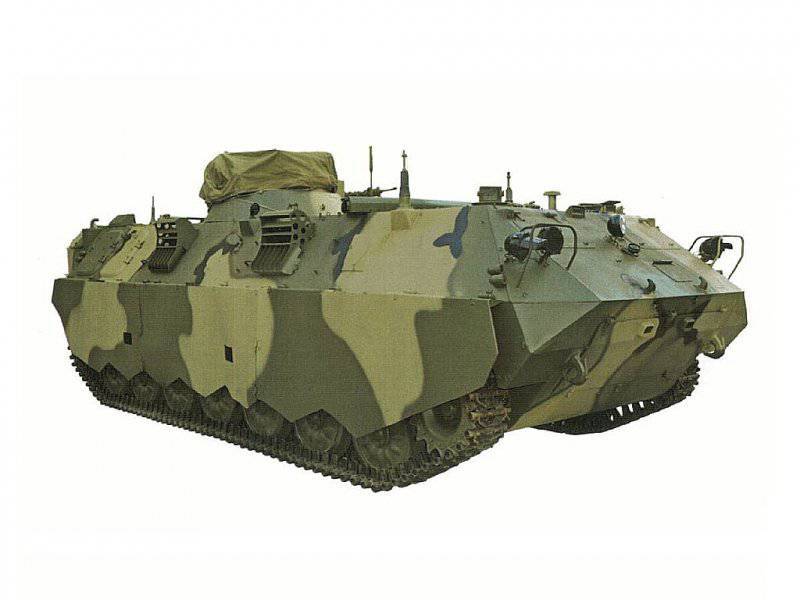 In the available photos a tracked vehicle painted in camouflage "pattern" is visible. The MT-LBU multi-purpose army tractor was chosen as the basis for the MRU-O — this is indicated in the patent and is evident from a number of characteristic features. To accommodate electronic equipment and the workplaces of its operators, the layout of the source machine has been changed. I had to move the engine and part of the transmission units from the stern to the middle. The freed rear compartment was given under the target equipment and received the name of the operational compartment. Equipment blocks and two calculation stations were placed in it. The control unit in the front of the vehicle did not change - it remained in the same place and, as before, has two places for the driver and the vehicle commander.

The dimensions of the equipment and the ergonomic standards of the crew’s workplaces required a slight expansion of the used volumes of the original MT-LBu. To accommodate one of the equipment units in the stern sheet of the machine, a hole was cut through, on which an armored box of the appropriate size was installed. As can be seen in the photographs, the rear wall of this box has two hatches, obviously, to facilitate maintenance. In addition, on the upper surface of the outer box there is some detail with a hinged lid. From this we can conclude that the auxiliary power plant and the generator feeding all the equipment of the vehicle are placed in the armored box. Confidence about the contents of the “enlarged” compartment would give high-quality photos of the insides of the operational compartment. On the existing ones, you can only see that on the inside the rear box has three shields, to which some cables are connected. The quality of the published photos is such that it is impossible to see the inscriptions on the plates. However, inside the car, obviously, could not find the volume to accommodate the APU and the generator. The only suitable place - the middle part of the body with MTO - may not be suitable due to the absence of any free volumes suitable for an auxiliary power unit. 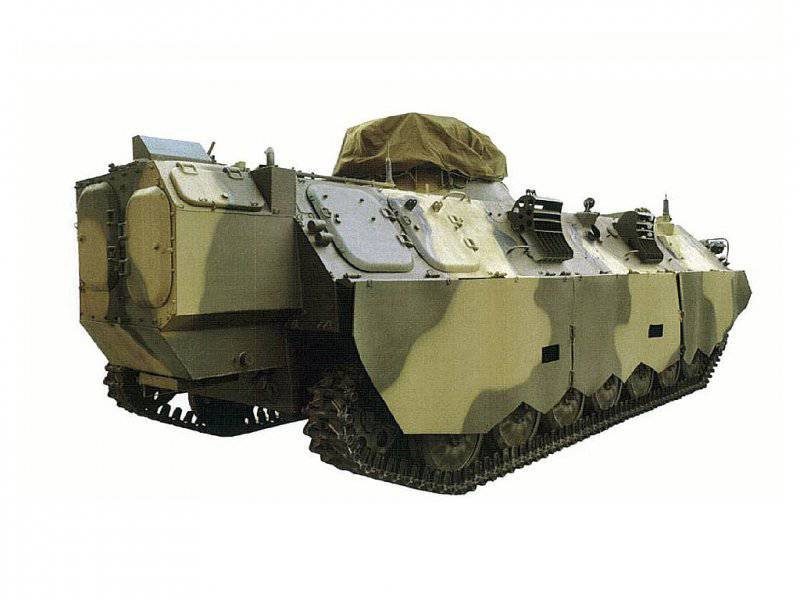 If the version with the APU outside the main building is correct, then all electronic units are located inside the operating compartment, next to the crew. Two operators of electronic systems are located side by side, on the left side of the machine. Operators can use a relatively large aft door or two upper hatches to board and leave the car. Operators' jobs are equipped with three color displays, which displays all the necessary information. In addition, two keyboards with trackballs and one joystick are seen on the operators desk. Apparently, the software of the MRU-O complex has a graphical interface, and also allows you to directly control all the systems of the machine. It is noted that the middle monitor and the panel below it is the control panel of the optical-electronic system for all-round visibility.

The main element of the circular view system is located on the roof. In the middle part of it, an armored container is mounted on the MRU-O, in which the review unit and its lifting system are located in the stowed position. Before starting work, the electronics operators activate the lifting mechanism and the opto-electronic unit of circular view rises up on the telescopic rod. In the fully unfolded position, the bar lifts the unit to a height of at least six meters. In the photographs presented, the circular view unit is captured only from behind or from behind. Due to the lack of images of its front end, it is not yet possible to speak precisely about the composition of the target equipment. Probably, there are video and thermal imaging cameras, a laser range finder or something similar in the unit. In addition to the system of the circular review unit, there are four radio station antennas on the roof of the MRU-O car, which are designed to maintain communication with units and command, as well as to transmit the received data. 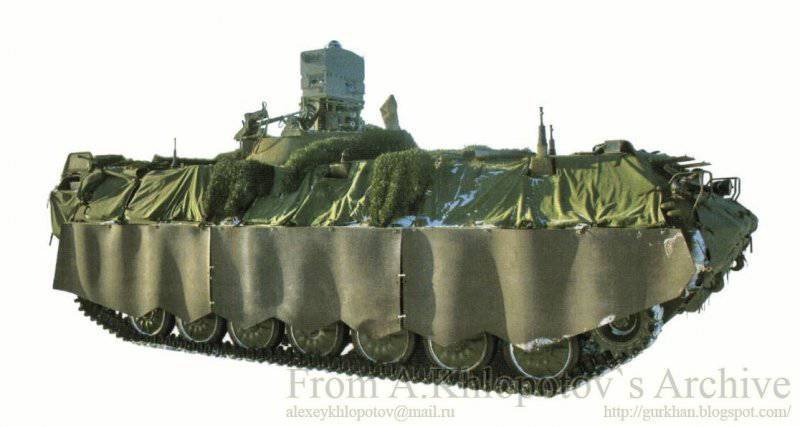 Information about the set of target equipment at the moment is secret. It is only known that the operators have at their disposal equipment for communicating, controlling the systems of the machine, receiving, processing and collecting the received optical-electronic information, as well as the electronics for encrypting the transmitted radio signal. Workplaces of the driver and commander of the machine, in turn, are equipped with navigation systems, maintaining communication with operators and other machines / headquarters, as well as other equipment necessary for controlling the movement of the machine. Both manned volume MRU-O have a system of ventilation and air conditioning.

It is argued that the machine MRU-O can be equipped with regular means of reducing visibility. In the existing photographs it can be seen that they consist of camouflage nets placed on the roof and hung along the top of the sides. In addition, the reduction of visibility in the infrared range, apparently, is achieved with the help of special exhaust devices (on the right side), reducing the temperature of gases emitted by the engine and rubber-metal side screens. The latter close the support rollers and tracks, so that these parts, when heated while moving, do not give out the armored vehicle with infrared radiation. 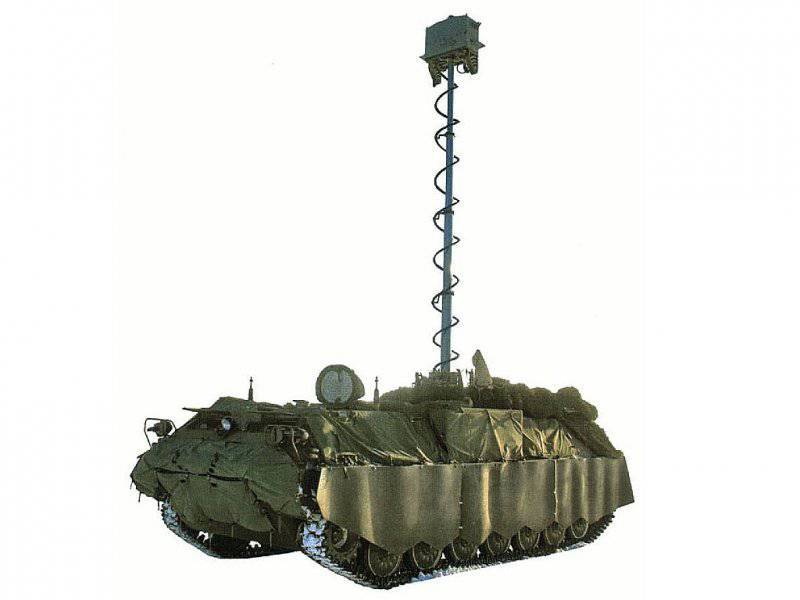 Any information on the progress of the project, testing machines, etc. have not yet become public. All open information - two dozen photos of the appearance and internal volumes of the machine, as well as several lines of text. At the same time, “text accompaniment” is rather vague and basically contains only general definitions, without giving details. Finally, even the mass-dimensional or running parameters of the MRU-O machine were not announced. Judging by the absence of major changes in the hull design, with the exception of adding aft armored box, the length of the new combat vehicle does not exceed 7,5-8 meters, and the width remains the same - 2850 mm. As for the height of the MRU-O car, then the initial two meters of the original MT-LBU, due to the armored casing for the circular view unit, apparently added about 45-50 centimeters. Regarding ride quality, due to the lack of data on the engine and combat weight, we can only guess. Most likely, the speed, maneuverability and maneuverability of the MRU-O car remained the same or almost the same as the MT-LBu. 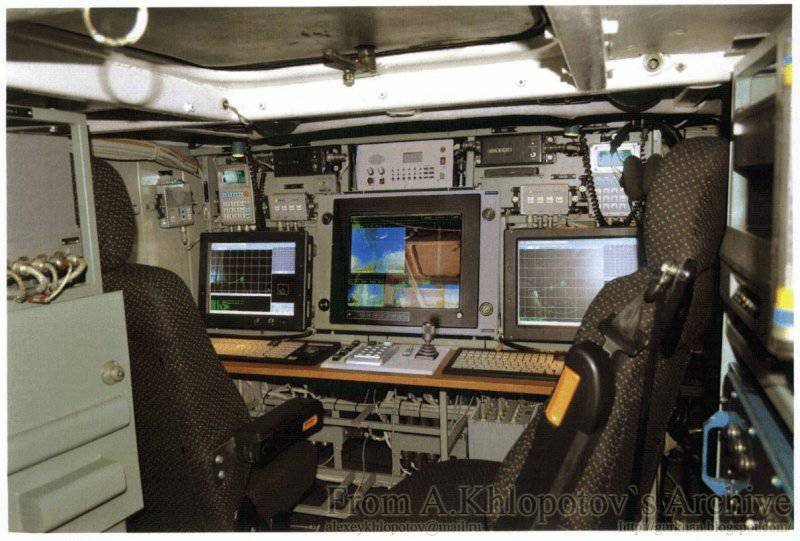