Combat aircraft. Viking who knew how to fly 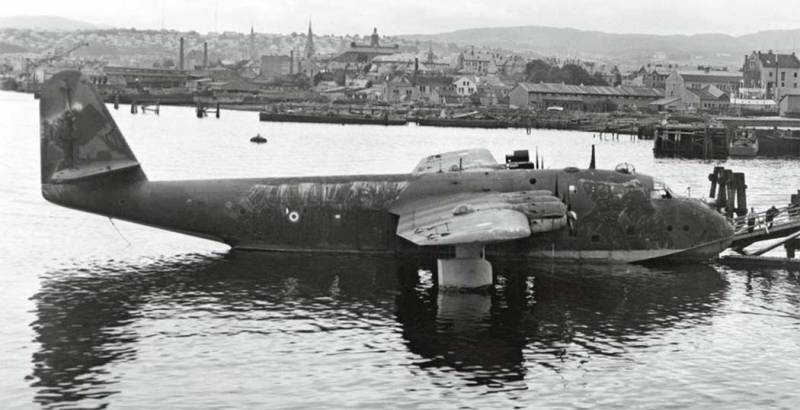 The real "Viking", such a controversial amball, a jock on Teutonic steroids. Controversial, because it could have been called the largest plane - a flying boat, but it’s bad luck, Dornier-X retained this title for itself in those years. Although, in fact, the loser boat, which flew less than it was under repair.


But the fact remains, and the Viking was a little less. But rightfully this plane took the title of the largest military naval aircraft.

It’s unfortunate that I haven’t met with information about how the guys from the Hamburger Flygstsoigbau managed to make friends with the Lufthansa in terms of building for the last aircraft.

The company was not only little known, it was less than five years old. Apparently, there was enough ambition and something else. Either they worked it out with the liver, but the fact: Lufthansa, the state German carrier, agreed to order the Hamburgers not just an airplane, not just a flying boat, but a transatlantic liner.

In the 30s, the roof of everyone was frustrated by the idea of ​​flying from Europe to America by plane, and just in case, the plane should have been able to splash down. Precisely because the case is all sorts.

And the Lufthansa really wanted to fly to America, and Dornier-X was not very able to do it.

Dornier X
Therefore, it was likely that they bought the offer of the company in the air carrier, which up to that point had been noted by the not very successful diving bomber and a quite decent seaplane.

That’s why in “Lufthansa” not only “Hamburger Flygtsoigbau” offers were rolled out, but also “Heinkel” and “Dornier”, to everyone who was thinking in hydraulic engineering.

But customers liked Na.222 the most. And according to the results of the competition, preference was given to a Hamburg company along with an order for three aircraft. The plane came out very luxurious, the cabin of the highest level of comfort for transporting 24 passengers during the day in seats and 16 berths for flying at night. 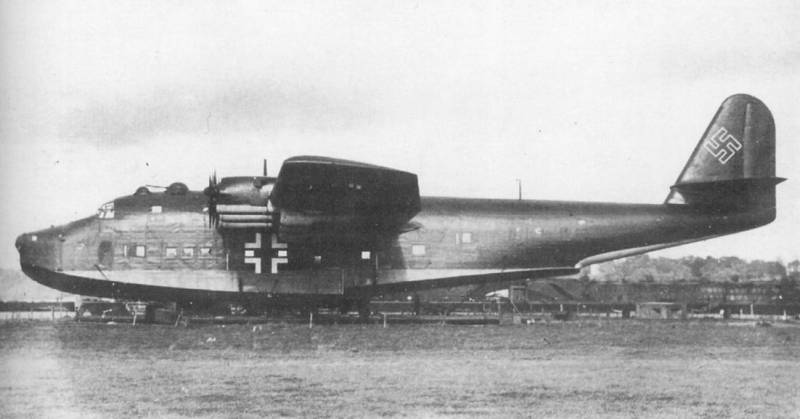 In the design itself, there were quite a few innovations that customers liked. The chief designer of Vogt, in order to reduce the hydrodynamic and aerodynamic drag, chose a ratio of length to width of the body equal to 8,4, with the generally accepted in the world 6.

The stabilizing wing floats were very original. With the help of an electric drive, after takeoff they were disengaged in two and retracted into the wing. 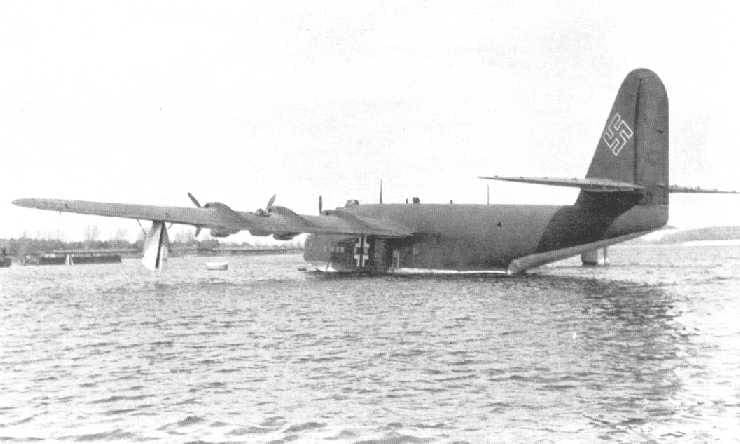 In the control system of this rather big boat there were a lot of servos, although manual control remained.

The power set was made of metal pipes, tubular engines with six engines were made, manholes were made in the main spar to access the engines during the flight.

The case was also all-metal, with two redans. It was covered with a corrosion-resistant coating 5 mm thick. In the hull there were two decks, a lower passenger and an upper working one.

The crew consisted of two pilots, two flight engineers, a navigator and a radio operator. During the war, with the addition of shooters, the crew grew to 11 people. 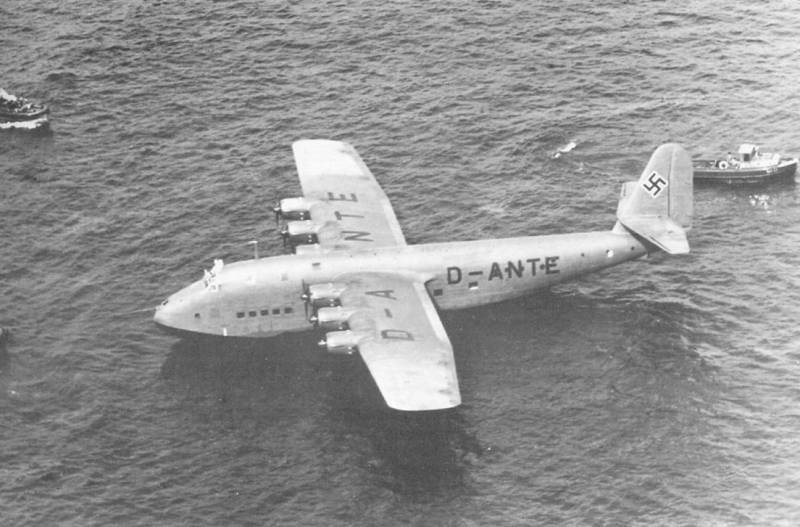 Boats were built very slowly, with feeling, with sense, with arrangement. And when the Second World War began, aircraft were still under construction. Of course, the war made adjustments. Some of the people who worked on the aircraft were transferred to finalization of VV.138, which arose a real need, but work on three flying boats for the Lufthansa continued.

In 1940, it was already clear that transatlantic flights VV.222 can not be seen. And thoughts began on what to do with unfinished aircraft. Nevertheless, in August 1940, the VV.222 made its first flight, the results of which satisfied everyone. Not without flaws, but overall very strong and stable. A little "goat" during landing, but everyone considered this a recoverable affair. 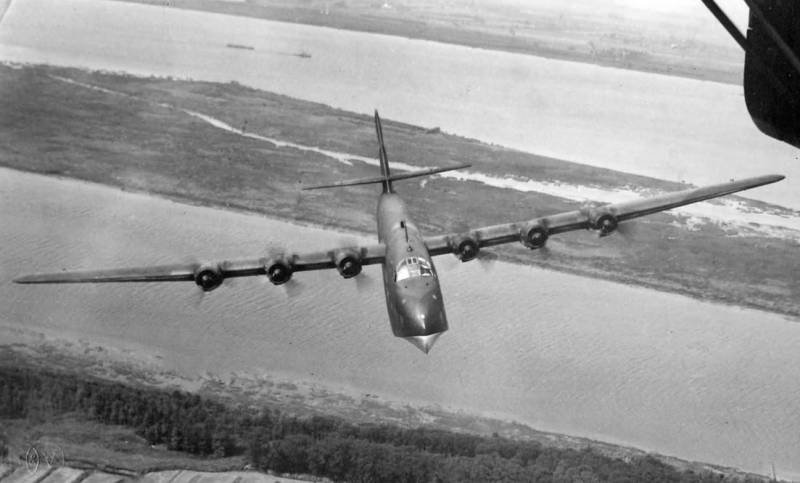 Flight tests slowly continued throughout the fall and early winter. And then, so as not to burn fuel just like that, the Luftwaffe invited manufacturers to remake the plane a little in cargo. Hamburger Flygtsoigbau agreed with the proposal.

Cargo hatchways were cut through the hull of the boat, the interior was made more Spartan, and, bearing the signs of the Luftwaffe, BV.222 was sent to test in Kirkeness, where the Germans just conquered Norway. 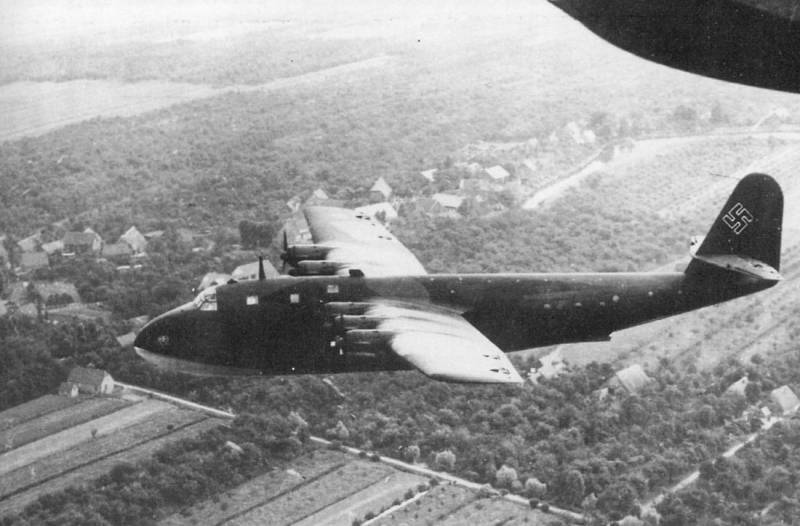 As a result, the plane flew over 30 km in seven flights, transported 000 tons of various cargoes and took out 65 wounded from Norway.

Then the boat was sent to the Mediterranean Sea, where Germany began to develop North Africa. BV.222 made 17 flights from Greece to Africa, transporting 30 tons of cargo and evacuating 515 wounded.

During flights at an altitude of 4500 m, a maximum speed of 382 km / h was recorded. Not to say that the figure is large, but for such a hefty aircraft is very decent. The maximum range was calculated at 7000 km. The aircraft accommodated up to 72 people wounded and up to 92 fully equipped soldiers. 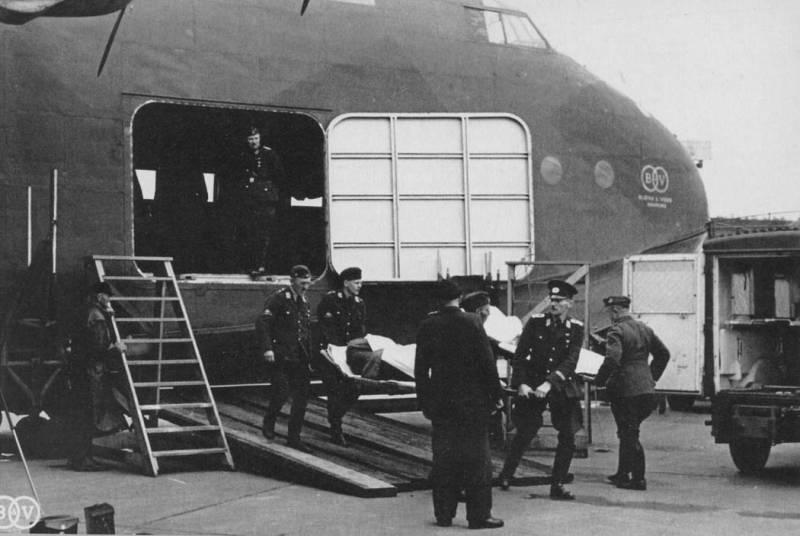 All this time, VV.222 flew without any weapons at all. In case of meeting with the enemy, the boat was usually accompanied by a pair of Bf.110. But it happened that the fighters were late to the meeting point or did not arrive at the meeting at all. And the crew of VV.222 flew at their own peril and risk.

However, during one of the unaccompanied flights in October 1941, VV.222 intercepted two Bofayters of the British Navy. In theory, the boat’s career was supposed to end there, but not so lucky, the Germans behaved arrogantly enough, and the British simply did not know what kind of aircraft it was. Which was quite logical, BV.222 existed in a single copy at that time, so the Bofayters turned and ... flew away.

Or they could finish history aircraft using their guns.

After this flight, having changed clothes and uniforms, the Germans drove the plane to the factory in order to supply weapons. 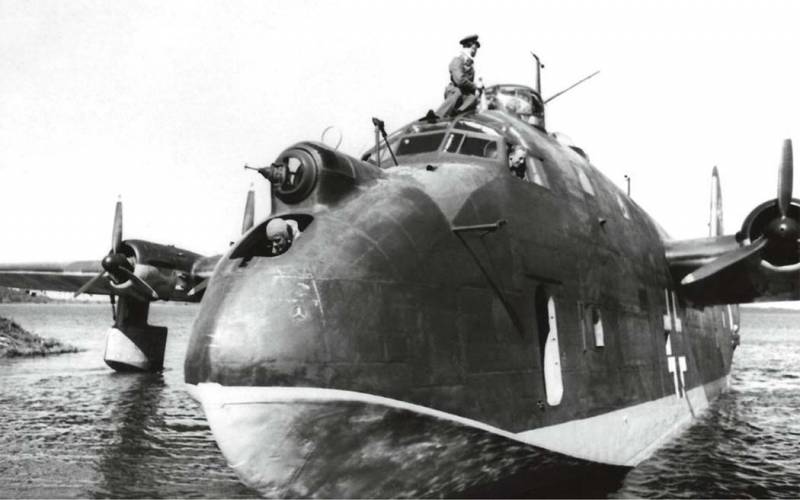 The second aircraft received exactly the same weapons, which by that time was completely ready. Since the boat was going to be used as a scout in the Atlantic, it was equipped with four MG-131s in two gondolas under the wings between an external pair of engines. Machine guns were mounted in the nose and tail of each gondola.

True, tests showed that the resistance of the nacelles “eats up” almost 50 km / h, and they were eventually abandoned.

The use of the first three machines showed that the aircraft is quite decent, with good seaworthiness, so it was decided to order more. 5 more planes were laid, which were built, armed and began to be used as transport mainly in the Mediterranean Sea, where they took an active part in the work to supply the Rommel corps in Africa.

The figures of the Viking are impressive. In 1942, while constantly flying to Africa, BV.222 transported 1 tons of cargo, delivered 435 replenishment men and transported 17 wounded. Good job for a small number of aircraft. 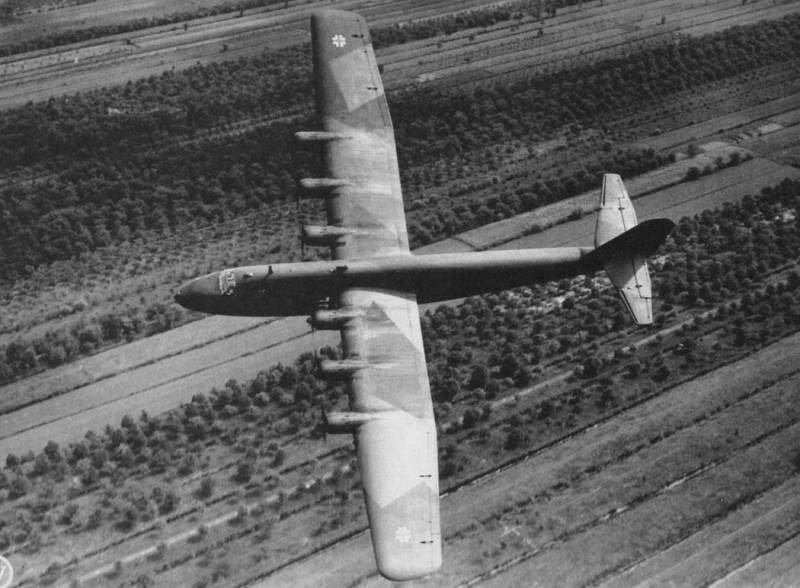 Airplanes flew from bases in Italy and Greece to Tobruk and Dern, delivering cargo and picking up the wounded. Both with and without accompaniment. For which they were eventually punished by the British, who at the end of 1942 shot down two aircraft. Two more aircraft were fatally damaged, one in battle, one in an accident.

Logically, a decision was made to strengthen weapons for the remaining four boats.

New defensive weapons consisted in the installation of a 20 mm MG.151 gun in the front upper turret. In two of the same towers behind the engine nacelles placed two more MG.151. MG-131 was installed in the bow window, two MG-81s were left in the side windows. 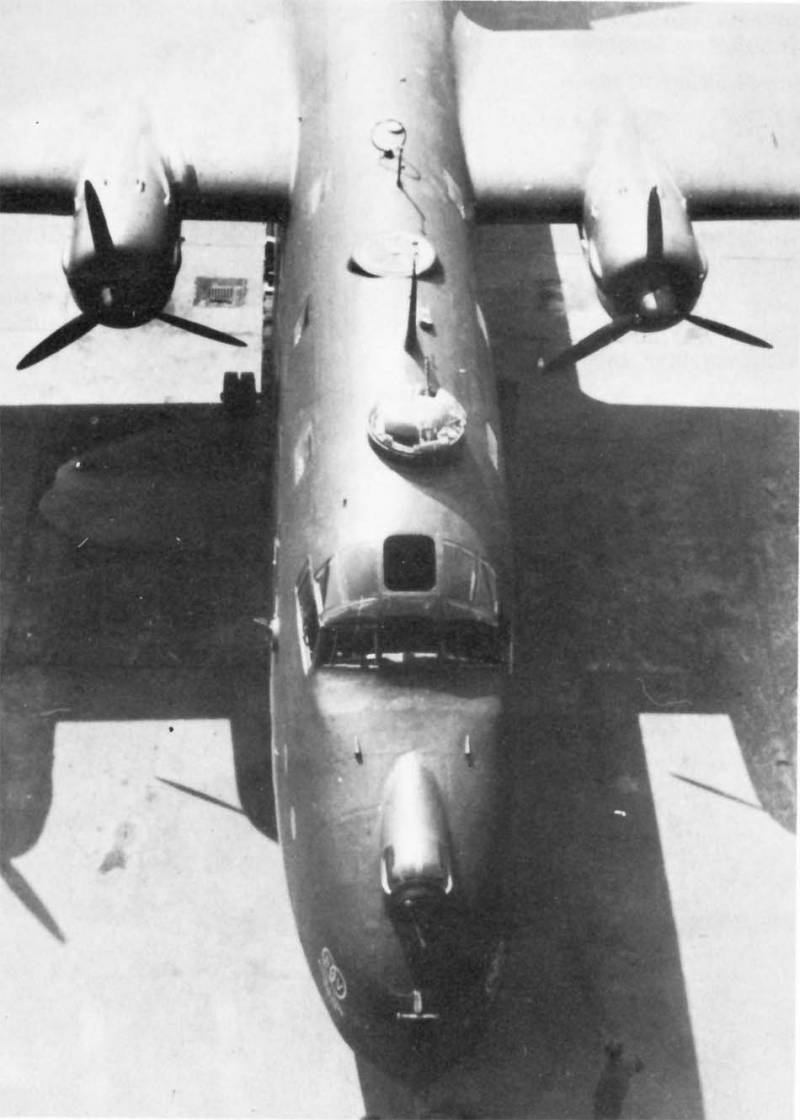 The engines were equipped with a water-alcohol mixture injection system that increased power to 1200 hp. By the end of the work, it became clear that the war in North Africa was approaching its natural conclusion.

Therefore, it was decided to transfer all four VV.222 to the Atlantic command to organize interaction with submarines. For this, the seaplanes were equipped with FuG-200 Hohentwil search locators, a FuG-16Z radio station with positioning capability, a FuG-25a and a FuG-101a radio altimeter. ETS 501 bomb racks could carry the FuG-302c Shwan (Swan) beacon.

The aircraft were based on the Atlantic coast of France, in Biscarossa. Until 1944, BV.222 constantly searched for enemy surface ships and guided their submarines on them.

The most interesting thing is that the Allies were no longer able to bring down a single Viking. Two of the four aircraft were sunk (yes, they were sunk, these are boats, albeit flying) during the British air raid aviation. 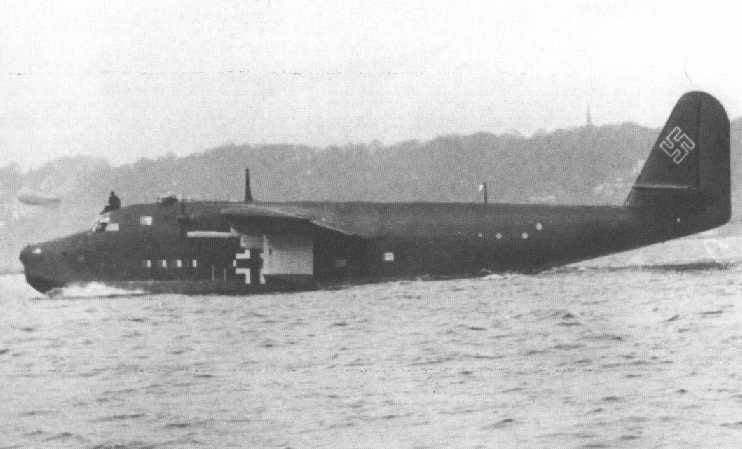 Two remaining BV.222 were captured by the Americans, and another plane (was under repair at the factory) went to the British.

Low speed combined with quite a decent range and carrying capacity. But when BMW engines were upgraded with an afterburner system, the speed increased very much and reached 390 km / h, which is more than worthy for such a chest, and the load capacity reached 8 tons, which is generally very decent.

Modern control on servos greatly facilitated the life of the crew, if it was necessary to take off with a hefty overload, gunpowder accelerators could easily be used, in general, the best word that can be applied to “Viking” is “convenient”.

Plus, a completely sane set of weapons, with which it was possible to create problems for any aircraft.

Well, of course, a flying boat, capable of flying for a long time and staying well on water (and others were not built in Hamburg), is more than useful in naval aviation. 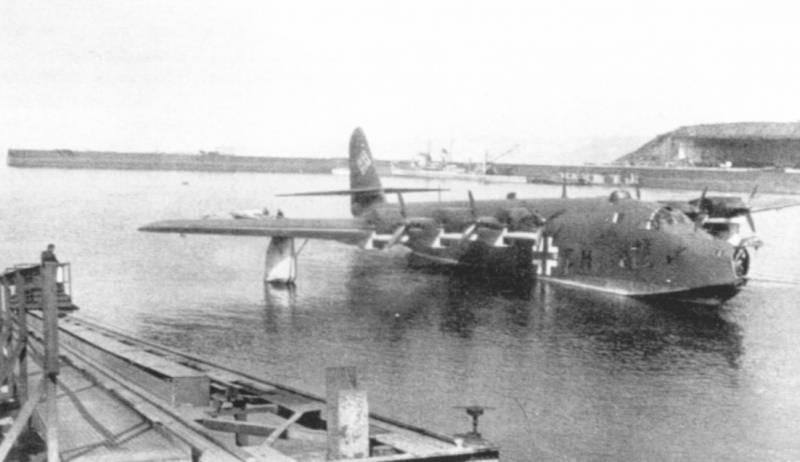 The aircraft could take on board 96 fully equipped soldiers or 72 wounded on a stretcher.