Aircraft Bi-Mono with an upper wing of increased scope. Photo by Aviadejavu.ru

It is well known that a biplane compares favorably with a monoplane with higher takeoff and landing characteristics. Monoplane, in turn, bypasses the competitor in all other flight modes. During World War II, the British company F. Hills & Sons (Hillson) tried to create an aircraft that combines the best qualities of these two architectures. The first experimental sample of this kind remained in stories called Bi-Mono.

At the very beginning of World War II, Hills & Sons received several lucrative military contracts, but its management did not intend to stop there. In the fall of 1940, the commercial director of the company, U.R. Chown made a curious suggestion. For the Royal Air Force, a fighter-interceptor with a special design should have been created.

The concept proposed the construction of an aircraft from affordable and cheap materials with a minimum number of expensive components. This fighter was intended for air defense, and therefore had to take off from any sites. To improve take-off and landing performance, an original aerodynamic design was proposed. The fighter was supposed to take off on two wings in a biplane configuration. After take-off and reaching a predetermined height, the upper wing should be dropped to reduce drag and increase LTH. This concept is called slip-wing ("slipping wing").

The military department got acquainted with the proposal and was not interested in it. The idea of ​​dropping the wing after takeoff was considered overly bold and dangerous. In addition, at that time, the UK was not able to disperse forces on all the proposed projects. 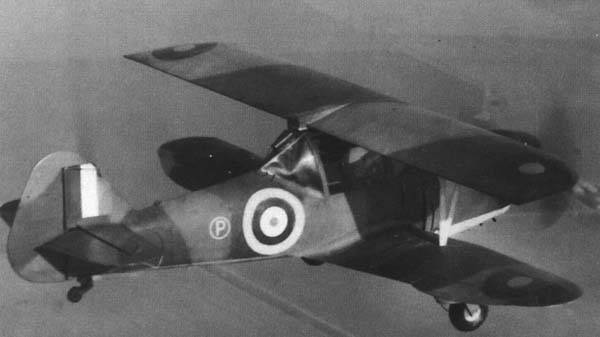 Flying with planes of equal magnitude. Photo Airwar.ru
The project from Hillson did not receive support, but the company found the opportunity to continue it. On her own initiative and on her own, she decided to develop and test an experimental technology demonstrator aircraft. The presence of such a sample could affect the opinion of the military.

The experimental aircraft was developed at the Hillson Design Bureau. The chief designer was Ernest Lewis. The project was not particularly difficult, and it was possible to complete in just 32 days. The proposed aircraft was not intended for real service, but could show the capabilities of slip-wing.

They involved the Royal Aircraft Establishment Institute. In his wind tunnel, we tested the model of the aircraft and got positive results. In all modes, the model behaved correctly. Relieving the wing at all speeds was safe and allowed the flight to continue. However, there was a significant change in the aerodynamics and behavior of the aircraft.

The company found opportunities for the construction of the aircraft, although this process has already taken 72 days. However, in early 1941, the prototype was ready for withdrawal to ground and flight tests. 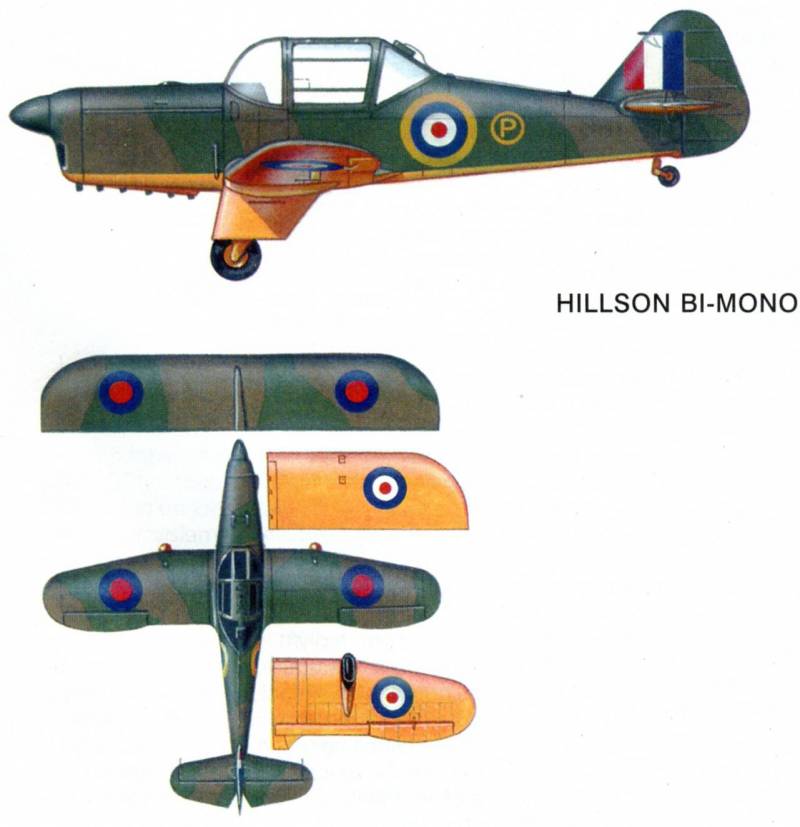 General types of experimental aircraft. Figure Alternathistory.com
The original design aircraft was called Bi-Mono - an abbreviation for "biplane-monoplane." Other names were not used. In addition, the prototype did not even have a registration number.

Bi-Mono was extremely simple in design and small in size. The fuselage had a steel frame and linen sheathing. Both wings were built of wood using the basic technologies of the time. The length of the aircraft did not exceed 6 m, the scope of the fixed lower wing - 6,1 m.

At the design stage, two aerodynamic schemes were worked out. The first offered a half-wing with an upper wing span of 8,8 m. The second option provided for the use of two wings of the same wingspan of 6,1 m. Both wings were built for testing.

Own wing of the aircraft received a profile of RAF 34, had a direct center section and consoles with a small sweep angle. On the trailing edge were placed ailerons of increased area with the required efficiency. The upper wing was much simpler - it had a straight leading edge and rounded tips. Profile - Clark Y. The wing was fixed on the plane with the help of a central lock (on the lantern) and a pair of struts on the center section. 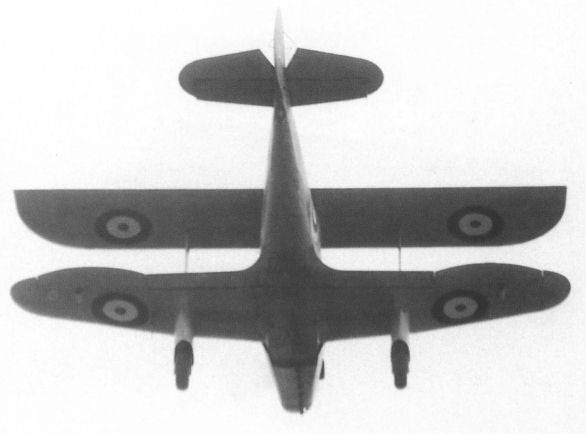 Takeoff in a biplane configuration. Photo by Aviadejavu.ru
In the nose of the fuselage, an air-cooled de Havilland Gipsy Six engine with 200 hp was installed. with two-bladed propeller. In the early stages a wooden screw was used; then applied metal.

Behind the power plant was a small cabin with a large lantern, which gave a good overview in all directions. The binding of the lantern was part of the power set and took on the load from the upper wing.

The plane received the simplest three-point fixed gear. The main racks were equipped with fairings.

The pilot Bi-Mono was ready for the spring of 1941, and tests began soon. The car was checked in the configuration of a monoplane and a biplane with two variants of the upper wing. In both cases, she behaved normally and showed acceptable characteristics. The next step was to be tests with the discharge of the upper wing.

Flying after dumping the upper wing. Photo Airwar.ru
For safety reasons, they decided to perform such tests over the sea. To do this, the aircraft was flown to Blackpool, on the coast of the Irish Sea. The first wing drop was scheduled for July 16.

On that day, Bi-Mono, under the control of pilot P.Kh. Richmond took to the air and flew towards the sea. Next to him was an understudy plane with project managers, RAE representatives, and cameramen. The aircraft reached a safe area and climbed to a height of 1370 m.

The test pilot pulled the lock control lever and dropped the upper wing. Under the action of the lifting force, it went up, after which there was a stall, and the part fell into the water. Due to the wing detachment, the aircraft lost some of its lift and “fell” by 80 m. The aircraft’s characteristics changed significantly, but remained within the normal range. P.Kh. Richmond successfully completed the flight and landed.

Shortly thereafter, the pilot aircraft was handed over to Aeroplane and Armament Experimental Establishment (A & AEE). At this stage, the car was slightly modified - in particular, a new metal screw was installed. Military experts also conducted a lot of test flights and experiments, according to the results of which a voluminous report appeared.

From experienced to combat

Tests by the development company, KVVS and A & AEE showed the full potential of the original design. It was found that a plane with a slip-wing can indeed combine high performance on take-off and other flight modes. This design provided take-off from unprepared sites of a smaller area, but did not limit flight and combat qualities in solving problems. 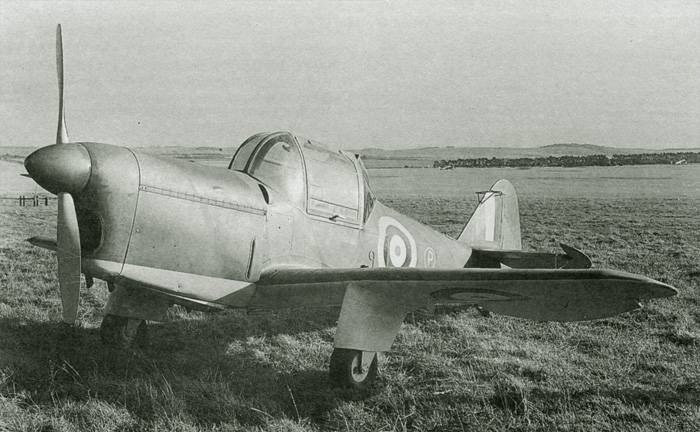 On the ground with one wing. Photo by Alternathistory.com
However, not without criticism. It was mainly associated with the relative complexity of the project and non-optimal economic features. The upper wing was in fact disposable: an unacceptable structural damage occurred during the fall. The production of such a unit that meets all the requirements was quite expensive. The use of any means of saving the wing complicated the project, but did not guarantee the desired savings.

However, the concept as a whole was considered viable and suitable for further development. F. Hills & Sons received an order to continue work, as well as the necessary financial and organizational support. She was ordered to design, build and test a modification of the Hawker Hurricane Mk.I serial fighter with a dropable upper wing.

This pilot project received the working designation FH.40. Such an aircraft successfully reached the flight test steel and demonstrated the prospects of slip-wing in the context of combat aviation. The FH.40 project is also of great interest and worthy of separate consideration.

We are in Yandex Zen
Variable Geometry Bet
An-12 in Afghanistan
27 comments
Information
Dear reader, to leave comments on the publication, you must to register.