Light vehicles of the Sarmat family 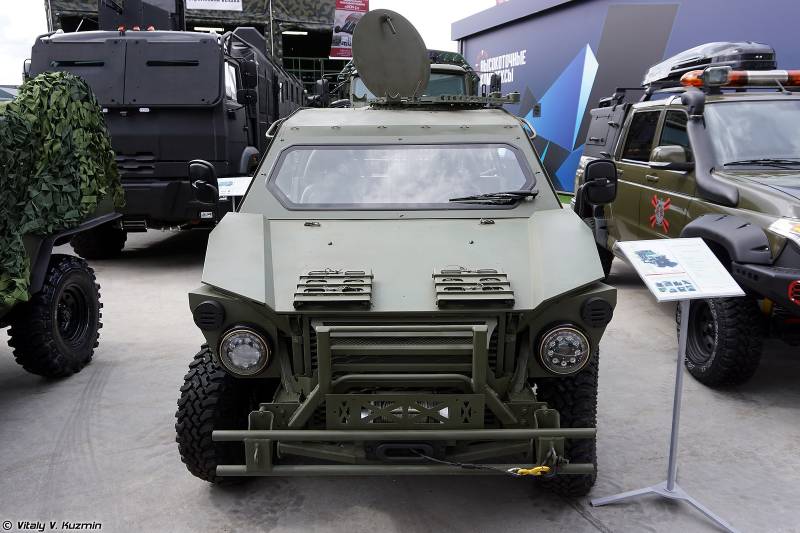 In the interests of the Russian armed forces, a variety of vehicles and automotive equipment are being created. One of these projects is being developed at OKB Technika and is called Sarmat. Its task is to create a light special vehicle capable of transporting fighters or small loads on different routes. Experienced "Sarmatians" have already come to the test and have even been shown to the public.

The appearance of the Sarmat family projects is directly related to the events of recent years. The experience of various operations has shown that the armed forces, together with other equipment, require light vehicles with high mobility and cross-country capabilities. This technique is able to provide the work of various units in different conditions.

To solve this problem, the Ministry of Defense turned to the Moscow Design Bureau "Technique". The bureau received a general technical task and began to study the look of the future army car. Despite the availability of technical specifications, the development was carried out at the expense of the design organization.

The first result of the new OCD was the design of the Sarmat-1 all-terrain vehicle. In this project, they decided to do only the preparation of design documentation. The Ministry of Defense got acquainted with it and adjusted the task for promising equipment. At this stage, new requirements for specifications appeared, as well as a clause on the use of only domestic components. 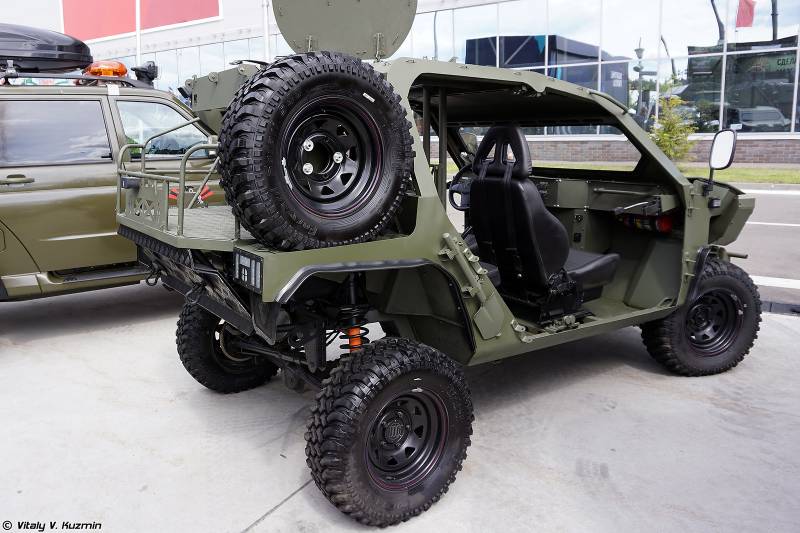 Photo: Vitaliy Kuzmin
In accordance with the new requirements, Sarmat-1 was redone, which resulted in the design of a light special vehicle LSTS-1943 Sarmat-2. This time, experimental equipment was built and tested. In addition, the prototype car was shown to the public at the Army-2018 exhibition. Based on the results of testing the prototype, the project assignment was again changed.

A new version of the specification was implemented in the form of the LSTS-1944 Sarmat-3 product. This machine is larger and heavier than its predecessor, but carries an increased payload and has other characteristics. The first show of such an all-terrain vehicle took place at the Army-2019 exhibition.

According to available data, “Sarmat-3” is now undergoing tests in the testing ground. The machine must show its characteristics and capabilities, after which the military will determine its future. OKB “Technika” expressed confidence in the success of the tests. However, accurate data on the progress of inspections are not yet available.

The first prototype in the new family was built according to the second project - LSTS-1943 or Sarmat-2. This project offers a lightweight two-axle four-wheel drive vehicle with extensive capabilities for transporting goods or installing weapons. At the same time, the machine is distinguished by a certain simplicity and does not need particularly complex components. It is alleged that such a design, among other things, is highly maintainable. 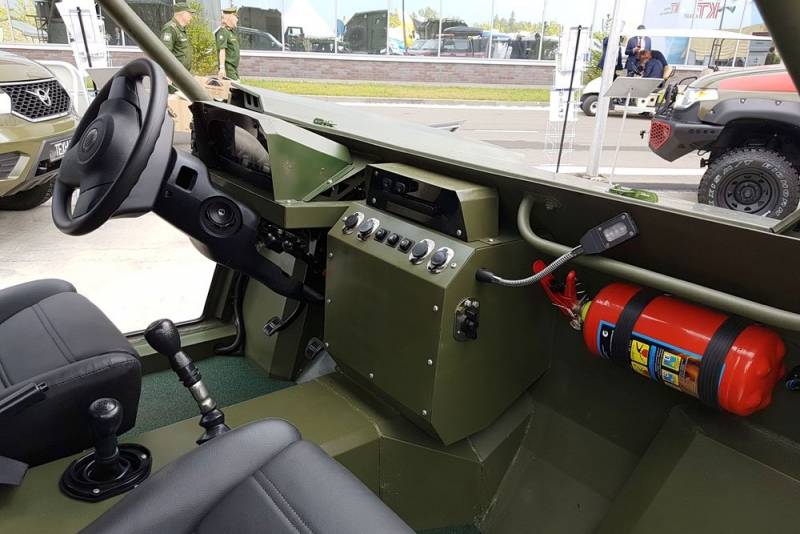 Photo: Vitaliy Kuzmin, Cabin "Sarmata-2" - nothing more
The car of a lightweight design is made according to the hood layout with a central cabin and a rear location of the cargo area. The cabin is made open. Length - 3,8 m, width 1,8 m, height - 2 m. Gross weight - 2100 kg with a carrying capacity of 600 kg.

The power unit is based on a VAZ-2123 gasoline engine with a capacity of 105 hp. The transmission includes center and center differential with locking. The chassis is built on the basis of axles with spring suspension. The car develops a speed of 130 km / h on the highway, a 4x4 wheel formula provides cross-country traffic.

The cabin of "Sarmat-2" can accommodate four fighters with weapons. Instead of a continuous roof, the machine uses safety bars with jumpers. They can also be used to install a particular infantry weaponry. First of all, it provides for the installation of existing machine guns of normal and large caliber, but the possibility of using other weapons is not excluded. 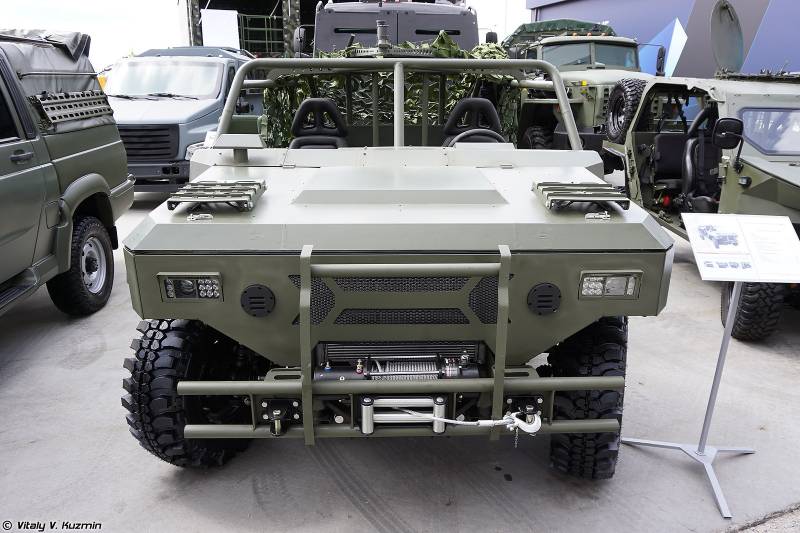 Photo: Vitaliy Kuzmin, Experienced Sarmat-3 at Army 2019
It is known that during the tests, the LSTS-1943 car showed rather high characteristics, but its capabilities did not fully suit the customer. The terms of reference were revised in the direction of increasing the main characteristics.

According to the amended assignment, we developed the LSTS-1944 Sarmat-3 project. The general architecture of such a machine remained the same, but part of the design feature changed, which led to an increase in a number of parameters. So, the car became larger and heavier, and at the same time increased its carrying capacity. The length of "Sarmat-3" increased to 3,9 m, its width - up to 2 m. Gross weight - 3,5 tons with a carrying capacity of 1,5 tons.

According to the results of tests of the previous all-terrain vehicle, the customer requested to remake the power plant. The gas engine should have been replaced by a diesel engine. Unfortunately, engines of this type with the required set of characteristics are not produced in Russia, and therefore the OKB Technika was forced to use a Chinese-made motor with a capacity of 153 hp. How this issue will be resolved in the future is unclear.

With the existing imported engine, the LSTS-1944 shows higher running characteristics. So, the maximum speed on the highway has grown to 150 km / h. Cruising range - 800 km. Mobility on rough terrain is provided by a successful chassis design and remains at the same level. 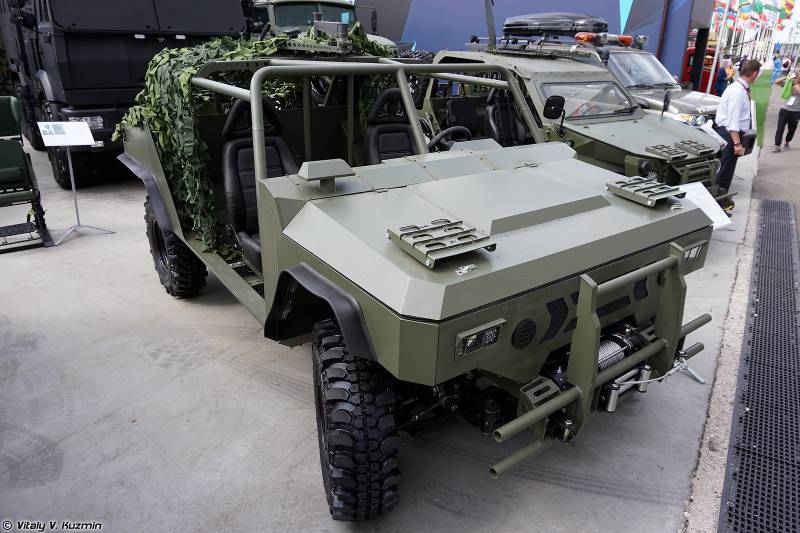 Photo: Vitaliy Kuzmin
Several housing configurations are available with varying use of available volumes. Due to this, from 2 to 8 seats can be installed on the machine. In particular, the rear of the housing can be used for mounting seats or for installing a cargo area-body. Saved devices for installing various weapons.

Light special vehicles "Sarmat" are designed to equip various units that have special requirements for their equipment. In some situations, special units of the armed forces or other structures need not armored vehicles, but light and mobile vehicles with the required payload and some weapons.

All-terrain vehicles of the Sarmatov type can be used in all situations when fast transportation of people and cargo to a given area in any area is required. In addition, they can be used in raids on enemy rear lines or in operations on specific theater of operations. For example, in Syrian events, not only armored vehicles show themselves well, but also lightweight models.

To date, in our country several types of light vehicles for special forces and other structures have been developed at once. One of the last in this direction are two samples of the Sarmat family. Now LSTS-1944 "Sarmat-3" is undergoing the necessary tests, according to the results of which the customer will draw conclusions. 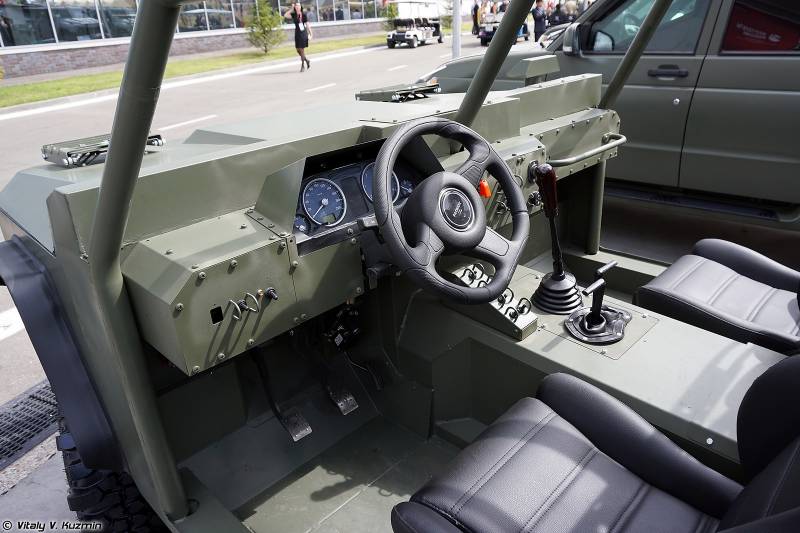 Photo: Vitaliy Kuzmin, Workplace of the driver
The developer organization believes that the third version of its all-terrain vehicle will successfully cope with the checks. Indeed, the original “Sarmat-1” was substantially reworked twice taking into account the requirements of the customer and now, most likely, meets the needs of the army as much as possible. In its current form, the LSTS-1944 machine can transport a whole detachment with weapons and cargo, as well as support it with fire.

However, the situation with engines remains unclear. The experienced Sarmat-3 is equipped with an imported diesel engine, which may require replacement. How to solve this problem is unknown. Perhaps the Ministry of Defense will allow to replace the diesel with a gasoline engine. Scenarios are also possible with the launch of the development of the necessary motor or with the mitigation of project requirements. In any case, the issue of the engine requires a solution - without this, the Sarmat-3 project will face the most serious problems.

In general, without taking into account the urgent problem of the engine, the Sarmat-2 and Sarmat-3 projects look interesting and promising. Such equipment is really needed by the Russian security forces, and in the foreseeable future it can go into series. However, for this, it is first necessary to solve the existing problems, as well as conduct tests and refinement.

Work on the Sarmat family of light vehicles has advanced far enough and yielded some of the desired results, which is cause for optimism. However, due to some difficulties, the future of the project is still not completely clear. Probably, it will be determined in the very near future.