Combat aircraft. Not a lion, but a lady among the peasants 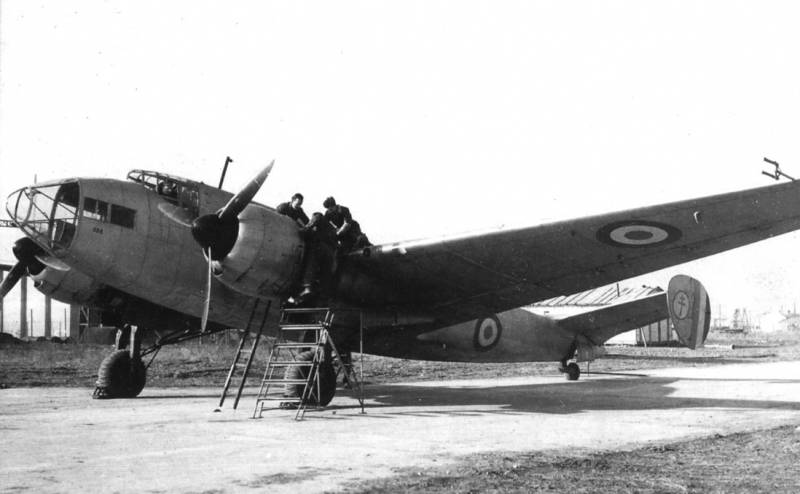 Yes, speaking of Soviet, German, British, American and Japanese cars, sooner or later I want to roll out something like that ... Romanian, Italian or French.


It’s not that “but we also fought”, because we fought, no words, some (like the already mentioned “Devatin” D.520) on three fronts at once, against all. Well, since there is such a fighter in stories French air force, why not be a bomber?

Yes, there is a bomber who fought the whole war. Not only did he skate the whole of World War II from the first to the last day, he also turned out to be a long-liver in the full program, having served after the war for as many as 20 years, 4 years more than Devatin.

And plus to everything, the plane was gorgeous for its time. Especially if you look at the architectural quirks and excesses in the French bomber aviation late 30s of the last century.

As an example of "beauty" - two "Farman" and "Flea"
Agree, against the background of these chests, which were also his peers, LeO-45 is just a masterpiece in terms of aerodynamics and grace. Finally, the French designers were able to a really beautiful and aesthetic aircraft.

And it all started then, at the beginning of the blessed thirties, when the doctrine of the Douai ruled in heaven. It was following the postulates of this doctrine that in France they created flying horror (in terms of aesthetics) such as Bloch MB 200 and 210, Amiot 143, Potez 540 and 542, Farman 221 and 222, LeO 257bis.

These seemingly "flying cruisers", somewhat creepy in appearance, protected by a round-fire turret with several machine guns, but slow, with poor maneuverability, respectively - completely defenseless during the day, without fighter escort, over enemy territory in the face of opposition from air defense and enemy fighters.

Having stamped these monsters, the French changed their minds and issued a project of a completely different property.

It was envisaged that these aircraft would operate exclusively under the guise of fighter jets, but nonetheless defensive weapons should be sufficient. The only thing that was recommended to be removed was the bow tower. This firing point and normal aerodynamics turned out to be poorly compatible things.

Many companies worked on the project, but it was the LeO designers who were able to come up with several innovations that ensured them victory in the competition.

To begin with, in a very original way, they proposed that the rear hemisphere be protected by a 20 mm cannon from the Spanish-Suiza. Nobody really did that. But the idea came up, because it was for this purpose that the plumage was made spaced, and it did not interfere with the shoot.

The machine gun that protected the lower hemisphere was located inside the retractable armored car. That is all for aerodynamics. The crew was reduced to four people, assigning the duties of navigator and scorer to the co-pilot.

The LeO 45 prototype was released a little earlier than its competitors and made its first flight on January 16, 1937. With 1200-horsepower Gnome-Rhone 14P engines, a top speed of 515 km / h was achieved. But then it became clear that the area of ​​the vertical tail surfaces is not enough on take-off and during climb. I had to immediately modify the steering wheels.

In tests with Hispano-Suiza, a top speed of 4000 m was reached - 480 km / h. This suited everyone, and Liore et Olivier received a preliminary order for 100 aircraft and then another contract for 480 aircraft followed. In total, orders for LeO 45 amounted to 1549 copies.

On May 11, 1940, 10 aircraft from Groupement 6, covered by 18 MS 406 fighters, made their first sortie. The targets were motorized columns on the Maastricht-Tongre highway and bridges over the Albert Canal. The attack was carried out from a height of 500 meters, one plane was shot down, and of the nine who returned the next day, only one was ready to take off. The rest, as they say, were "in a sieve"

After 10 days, on May 21, having completed 140 sorties, dropped 120 tons of bombs and lost 41 vehicles (16 over the territory occupied by the enemy), Groupement 6 was recalled to the rear for reformation. It somehow doesn’t draw on a “strange war” anymore, does it?

Units armed with the LeO 45 fought on all fronts. Still, the plane gave a chance for a successful mission and return home. True, if there was no fighter cover, usually everything ended sadly.

The last day's departure of LeO 45 during the campaign of 1939-40 was carried out in the afternoon of June 24 by 11 aircraft again from Groupement 6.

Next was capitulation on June 25th. And the hostilities in Europe for France are over.

If we talk about the contribution of bombers to the resistance to the Wehrmacht, then according to Groupement 6 there is such data: more than 400 group sorties, 320 tons of dropped bombs, 31 LeO 45 were shot down by enemy anti-aircraft guns or fighter jets, 40 were written off due to military injuries or broken on the ground, and 5 were lost in unfortunate cases. 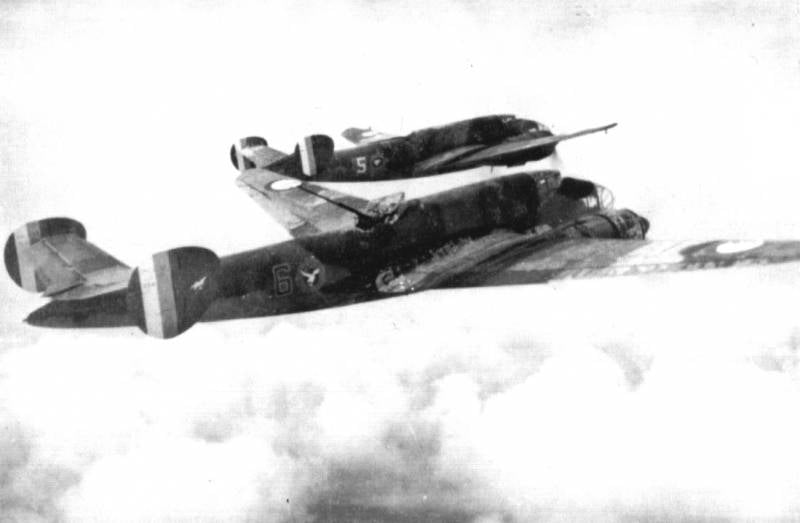 Then the war continued in North Africa, where LeO 45 also fought, and, like many French planes, on both sides of the front.

LeO 45 as part of various squadrons took part in the bombing raids on September 23 and 24, 1940 on British Gibraltar in revenge for the attack on Dakar. A number of vehicles in the three squadrons were transferred to Syria. These squadrons completed a total of 855 sorties. 5 LeO 45 were lost in battle, 12 were destroyed on the ground and 11 were decommissioned due to accidents.

In April 1941, the Germans allowed the resumption of aircraft production in the unoccupied zone of France. The Ministry of Aviation of the Vichy Government issued a contract to factories for the release of 225 LeO 45 in Amberier. For the production of used nodes and parts that were collected in both territories of France. 109 cars were produced, which went to replenish parts, mainly based in Africa.

Several LeO 45s were handed over to the Royal Italian Air Force and flew at the 51st Bomber Group and Bomber Aviation School.

In general, the Luftwaffe LeO 45 as a bomber was completely not interested. They were better, but the Germans used the LeO 45 transport aircraft very willingly. Even at one time, the production of the LeO 451T transport modification for transporting fuel and personnel was arranged at the Marignan factory.

These modified aircraft could carry eight 200-liter barrels of fuel or 17 soldiers. The number of LeO 451 converted to the LeO 451T variant in Marignane in 1943-44 was not very large, but in 1943 the KGrzbV 700 transport air group was equipped with these aircraft.

"African", that is, captured there, LeO 45 with US Air Force badges transported cargo from the ports of Morocco to the advanced airfields in Tunisia and Algeria. 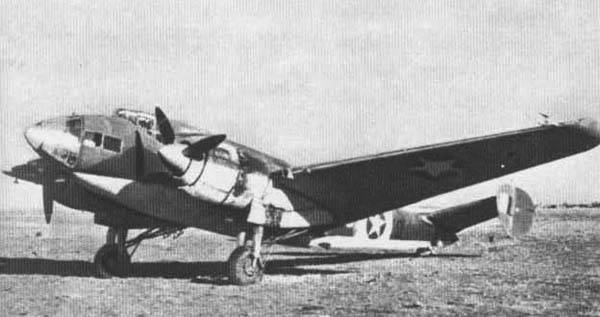 During the years 1945-46, the Technical Directorate of the Aircraft Industry accepted 14 of the remaining machines in France and returned them to the SNCASO factory in Marignane for remodeling.

Eleven of them were modified in the LeO 451E (E - Essais - research) version and were used as flying laboratories and carriers, for example, for launching missiles.

The LeO 45 was redesigned and operated as passenger (6 passengers could travel 3500 km at a speed of 400 km / h), search and rescue aircraft, cartographic services.

The last two LeO 45 were removed from the search and rescue squad in September 1957!

That's how the plane served. There were few centenarians like him. This indicates that the aircraft was very good. Of course, there were also negative aspects, but even in the conditions of war they tried to fight them. 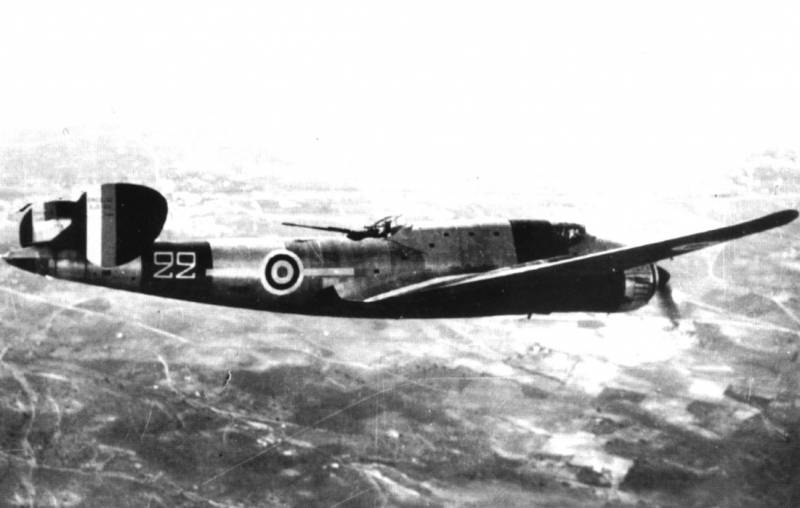 For example, the defensive armament from the Spanish-Suis gun HS 404. This is very good weaponundoubtedly. Plus, the central keel did not interfere with its use. However, the Germans learned, and learned very quickly, that you can hide behind a plumage washer, balance speed and calmly open fire.

Unfortunately, without a rudder washer, the aircraft was controlled with great difficulty.

The second disadvantage was the design of the gun itself. The 60 round magazine was heavy and bulky. And sometimes replacing it at a very inopportune moment became fatal for the entire crew and aircraft. 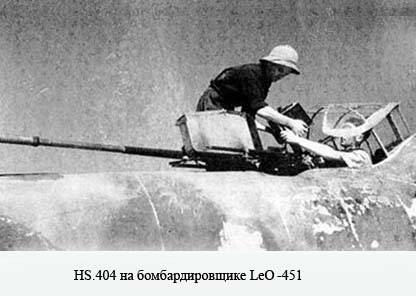 However, LeO 45 was not a victim. Cases of very fierce battles between LeO 45 and Luftwaffe fighters are known. Still, the French plane had good speed and the ability to maneuver. History has preserved reports (on both sides) of the battle on June 6, 1940, when 14 Messerschmitt Bf-45 and Bf-15 fighters attacked 109 LeO 110s. Bombers shot down three enemy fighters, losing five of their aircraft.

And in 1942, by order of the Vichy government and with the permission of the occupying forces of Germany, the LeO 45 weapons were finalized. The area of ​​the end washers was increased on planes, and the cannon was supplemented with two 7,5-mm MAC-1934 machine guns with 750 rounds.

Speaking about the flight characteristics of the bomber, one can also say the following: the plane was not uniquely good or bad.

At first, there were a lot of “raids” on LeO 45, the plane was unusual for the majority of French pilots. On takeoff and low speeds, he behaved simply disgustingly, "prowled" and "squandered."

As a result, he naturally earned a reputation as a dangerous and unforgiving aircraft.

However, as soon as LeO 45 took off and gained speed, it immediately transformed. Not only was it becoming easily and clearly controllable, without a bomb load, the LeO 45 easily performed the entire complex of aerobatics.

In general, such a capricious lady. 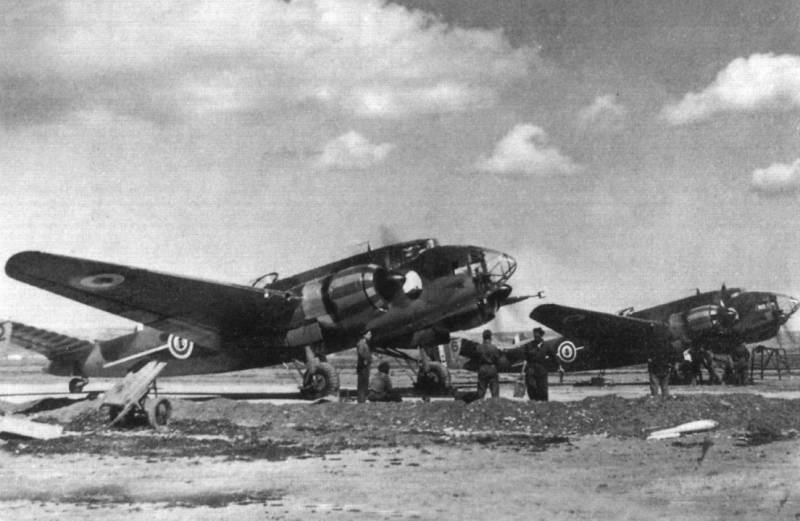 But it was the ability of the bomber to tumble in the sky and made it possible to retrain a fairly significant number of pilots on it. The distrust of the crews was treated in the classical way - test pilots performed amazing demonstration flights at retraining and voila centers - prejudice was replaced by enthusiasm.

In general, the plane was very good. Maneuverability, speed up to 480 km / h, sane defensive weapons (especially when two more machine guns were added to the cannon), good bomb load and working range deservedly put the LeO 45 in service with the best representatives of medium-sized bombers of the time.

Lavrov did not gain an airplane solely because it was not used correctly and for a short time.

It’s not the plane’s fault that it was used in attempts to stop the columns of German troops in attacks from low altitude and without fighter cover. The Wehrmacht already had decent anti-aircraft weapons in regimental structures, and the Luftwaffe simply did not allow to realize the full potential of this bomber.

But in fact it was the only French Air Force bomber capable of fighting in World War II. He fought. 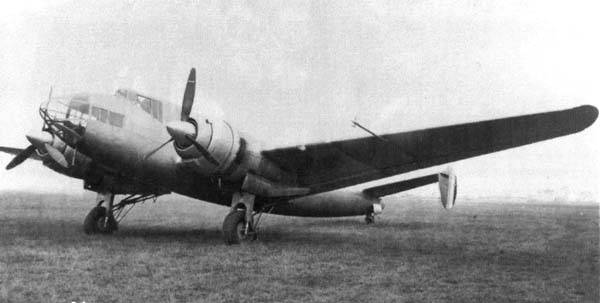 We are in Yandex Zen
LeO-45. A lucky plane, which was not lucky
An-12 in Afghanistan
50 comments
Information
Dear reader, to leave comments on the publication, you must to register.