The deployment location of the first Container radar was not accidental. 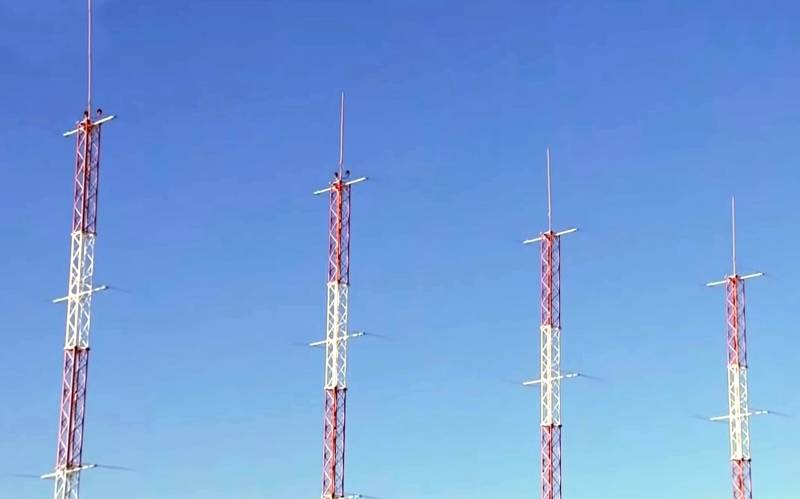 On December 1, the Ministry of Defense announced the transfer of the first 29B6 Container radar station to combat duty. This object is designed to monitor the air situation in the West and to detect potentially dangerous targets. In the foreseeable future, it is planned to deploy several new “Containers” and expand the army’s ability to monitor the situation around the borders.

The Container radar was developed at the Scientific Research Institute for Long-Range Radio Communications (NIIDAR, Moscow) by order of the Ministry of Defense. The main works on the construction of the headend of the series were completed in the recent past. The funds of the station were deployed in the Nizhny Novgorod region and in Mordovia. 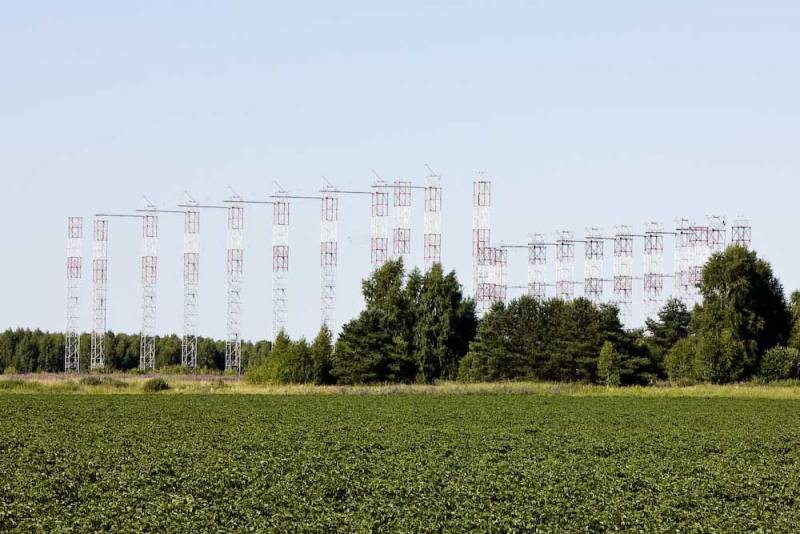 29B6 Radar Transmitter
A year ago, the first 29B6 station took up combat pilot duty. Until recently, various tests and refinement of the radar were carried out. Now all the necessary measures have been completed, thanks to which the station was able to take up full-fledged combat duty. 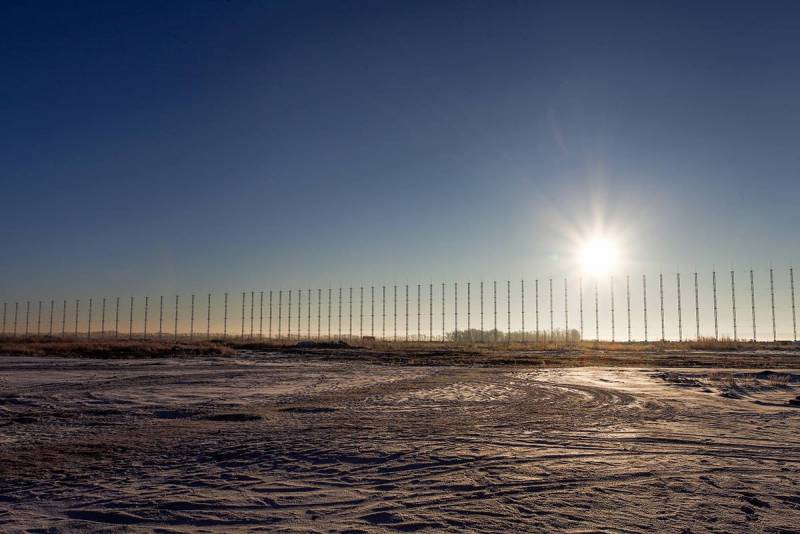 Receiving antenna field
Now it is a full-fledged element of the overall tracking system for the air situation and noticeably expands the detection area of ​​all major targets. Under the control of the first "Container" is the whole of Europe and some other regions.

The high performance of the 29B6 radar is provided by a special design. The station includes two antenna fields for transmitting and receiving signals, spaced 300 km away. According to well-known data, the transmitting part of the “Container” is deployed near the city of Gorodets (Nizhny Novgorod region), and receiving antennas operate near the town of Kovylkino (Mordovia).

The transmitting antenna of the complex is made in the form of a field with 36 masts and has a length of 440 m. The receiving part includes three straight sections of masts with a height of 34 m, deployed in the form of a triangle. The length of the receiving antenna field is 1300 m. The hardware of the radar complex is mounted in transported containers and is located in close proximity to the antennas.

According to the well-known data, the “Container” is a two-coordinate over-horizon type radar using the decimeter range. The station is capable of detecting air targets at ranges up to 3000 km and altitudes up to 100 km. The minimum detection range due to the horizontal principle of operation is 900 km. Initially, tracking was carried out in a sector with a width of 180 °; later it was increased to 240 °. The equipment of the complex provides automatic tracking of at least 500 objects of all basic types. 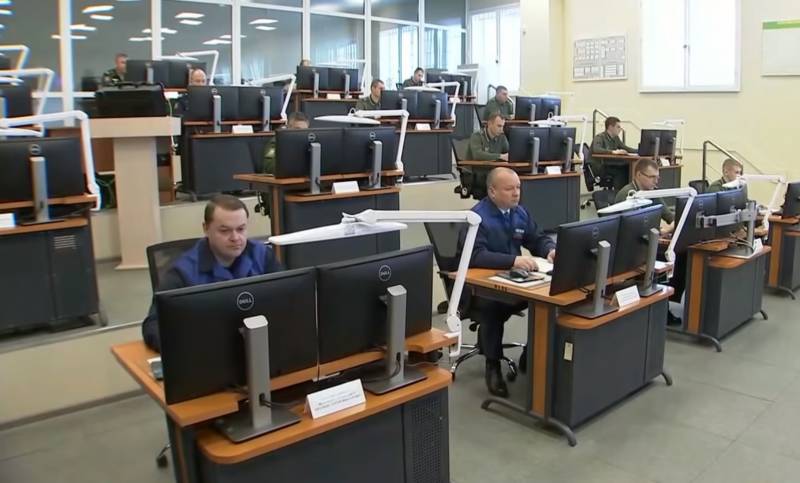 Control post
A single “aircraft” target in the continuous monitoring zone is detected for 0-350 seconds. For group purposes, the detection time does not exceed 12-15 min from the moment of take-off.

NIIDAR talks about the possibility of detecting strategic and tactical aircraft aviationincluding subtle, cruise and ballistic missiles, hypersonic aircraft, etc. The characteristic features are the definition of the class and type of goal. Traces are automatically calculated with data output to other air defense systems.

The objectives of the complex

The task of the Container radar is to detect and identify potentially dangerous aerodynamic targets in the horizon zone. Detection and escort lines are moved beyond the state border, which gives obvious advantages.

29B6 radar should work in the same control loops with other means of detecting air defense and missile defense. With its help, it is possible to identify the enemy attack in the shortest possible time, which leaves enough time for its reflection. In fact, potentially dangerous objects are detected long before they become a real threat, and by this time the air defense receives all the necessary data for their destruction.

The head sample 29Б6 deployed in the central part of Russia; his position was chosen taking into account the "dead zone" in 900 km. From the chosen position, the complex is able to monitor the situation in the airspace of the countries of Eastern and Central Europe, Scandinavia and even the Middle East. 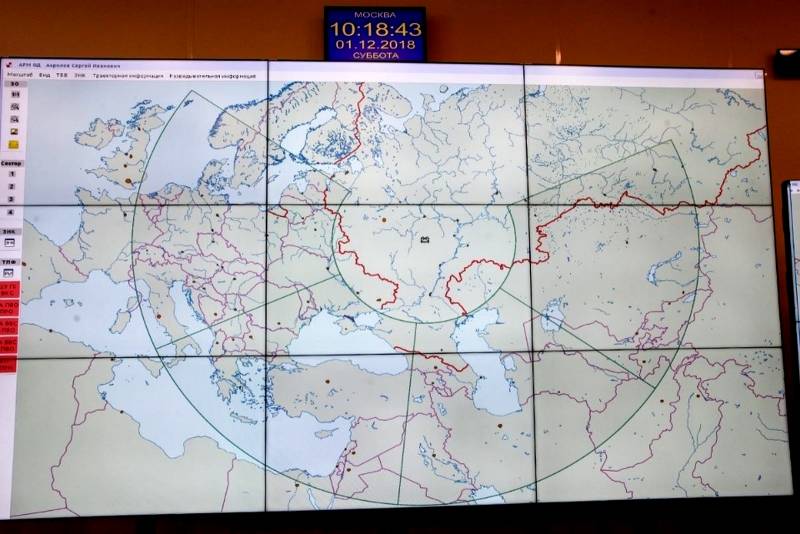 Radar coverage area
In fact, the first “Container” station successfully covers the entire western direction and effectively complements the already deployed surveillance systems of other types, which have lower characteristics.

The development organization claims that the 29B6 radar is capable of detecting all possible aerodynamic targets. Given current trends in the development of aviation and rocket technology, particular attention is paid to the possibility of detecting stealth aircraft and hypersonic aircraft. The possibilities for finding simpler goals built without the use of advanced technology are obvious.

The construction and operational deployment of the 29B6 “Container” head radar is the first step in the next improvement of the domestic air defense and missile defense system. To date, a continuous radar field has been created along the borders of Russia, providing tracking of the situation and the identification of dangerous objects. In the future, “Containers” will provide the expansion of the capabilities of such a system.

According to current plans, in the foreseeable future, three more over-the-horizon 29Б6 radars will be built and put on duty in different regions of Russia. The Nizhny Novgorod-Mordovian complex monitors the western direction, and the other three stations will be responsible for the Arctic, East and South.

A few years ago it became known about the construction of the second "Container" in the Far East. Obviously, this product will monitor flights over the Pacific Ocean and the countries of the Asia-Pacific region. In the near future, construction should be completed, after which the radar will be put on pilot combat duty.


The next may appear radar in the Arctic direction. Now NIIDAR is dealing with relevant issues. The construction of the Arctic station may begin in the coming years. Probably, for operation in harsh northern conditions, the initial design needs some kind of revision.

According to the results of the construction and launch of four 29B6 “Container” radars, our country will get new opportunities. “Traditional” radars with a limited detection range will be supplemented with new over-the-horizon systems. Due to this, the detection zone will expand significantly deep into the border regions.

It is worth recalling that the construction of new over-the-horizon missile warning radars with a detection range of thousands of kilometers is currently underway. The area of ​​responsibility of stations of the Voronezh family overlaps to a large extent with the area of ​​detection of the planned Containers, which gives well-known advantages.

The result of two current programs for the construction of radars for various purposes will be new opportunities for the armed forces. Around the borders of the country a continuous radar field will be created to detect aerodynamic and ballistic targets. All deployed funds will ensure the country's security "on long-distance approaches."

However, it should be borne in mind that the program for the construction of new radars of two classes has not yet been completed. The construction of several SPRN stations of the Voronezh family is ongoing, the same is happening as part of the Container project. Two types of stations will be able to provide a complete and continuous field around the borders only in the foreseeable future. Joint operation of air defense and missile defense stations so far is provided only in the Western direction.

However, all such plans will be implemented within a reasonable time, and the armed forces will receive the required models with special capabilities. Several stations of the Voronezh family in the near future will be put on combat alert, and the construction of the next Containers will be carried out at the same time. The result of all these works will be the formation of an expanded radar field and a corresponding increase in the country's defense capability.