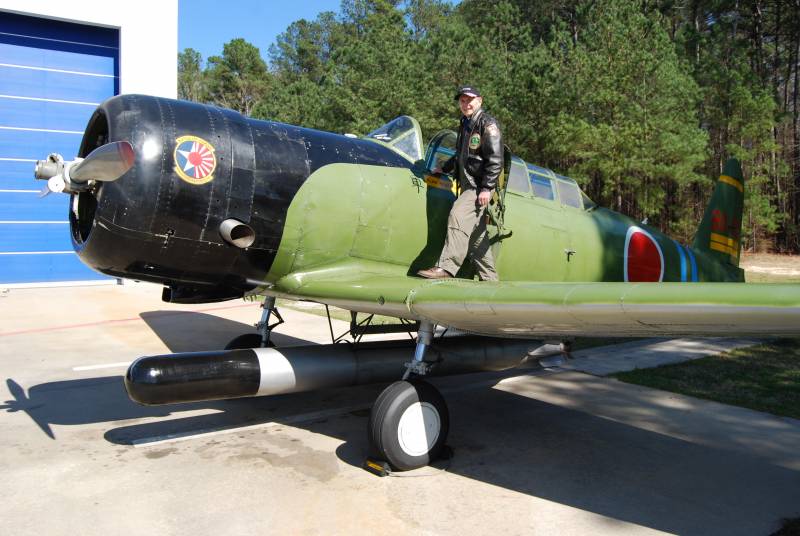 Close your eyes for a minute, and try to imagine ... yourself. In a dream, in a fantasy novel, in a terrible tale.


You are a pilot. You go to your plane to take off. Everything is more or less clear with you, but we are looking at the plane.

Several survival enhancing engines? Not. One. Yes, this is Sakae from Nakajima, it’s a good motor, but it’s alone. With the power of whole 1000 hp

Armor? Joke, please? Faith in Mikado, the spirit of bushido and so on will protect you. But there is no reservation. Absolutely.

Armament ... Well, something like armor. There is a machine gun powered 7,7-mm, it usually lies in the second cabin on the floor. You can try to scare someone, but I would not rely too much on success. 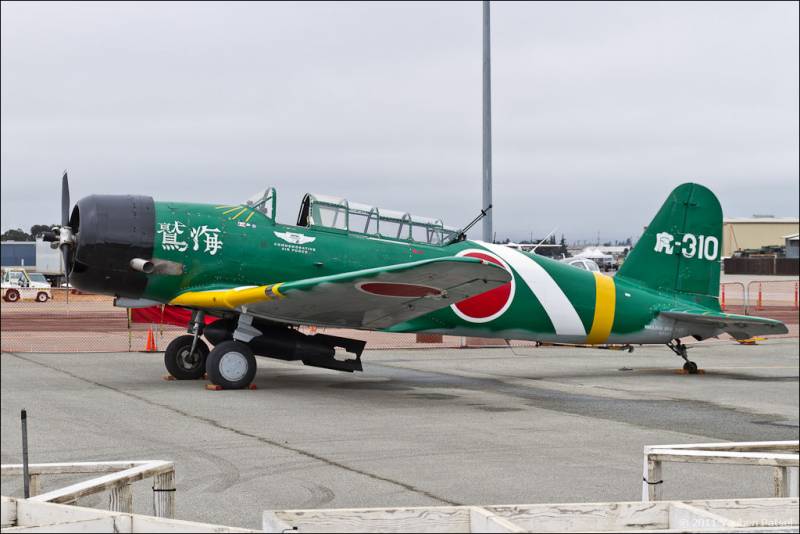 Add, or rather, subtract more speed as an ally. 350 km / h is a beautiful figure of maximum speed. In fact, 250 km / h with full load, and who goes to battle empty?

So who are you? Kamikaze suicide bomber? Yes, it seems, but ... wrong.

You are a Japanese marine pilot aviation.

And your plane is not just a flying coffin, but a very peculiar device, with the help of which just huge territories were won and victories were achieved, not inferior to other famous planes. 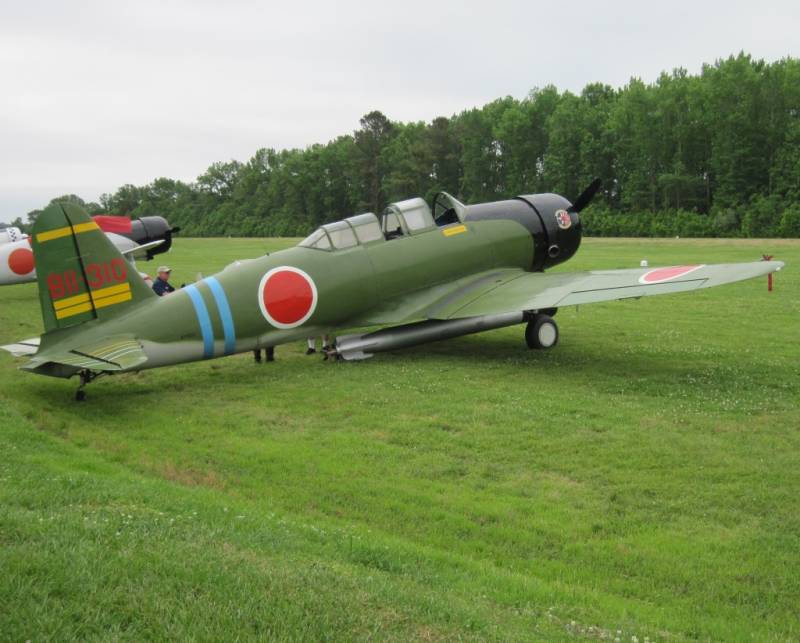 It was you, cowering in the cramped cabin of this miracle, choking on adrenaline, hearing the signal “Torah! Torah! Torah! ”, Starting to catch huge carcasses of battleships in the sight ... 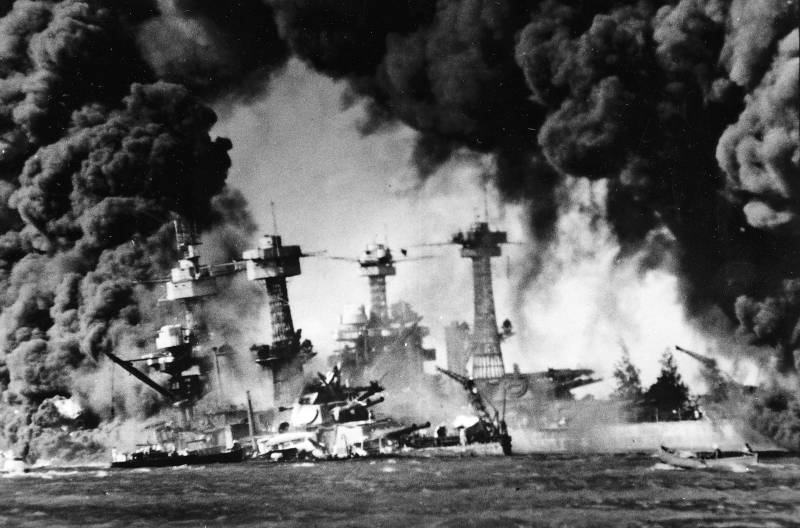 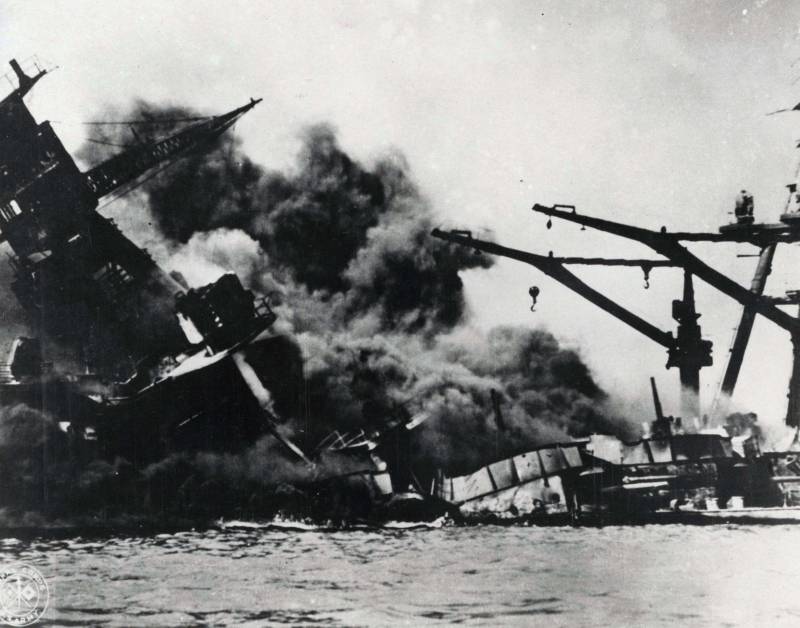 Mandatory excursion into the past. That's just in the very distant past.

Who knows when Japanese naval aviation was born? Yes, like the majority, during the First World War. In September 1914, when the Wakamiya Maru hydrotransport aircraft arrived in China to fight against the German Navy.

The armament of the first aircraft carrier in Japan was composed of four “Farman” float aircraft, which were engaged in reconnaissance and even tried to bomb something there. This is where it all started.

As in many countries backward in this regard, the first Japanese aircraft were imported. That was until 1918, when naval Lieutenant Chikuhei Nakajima together with Seibei Kavanishi founded an aviation company. 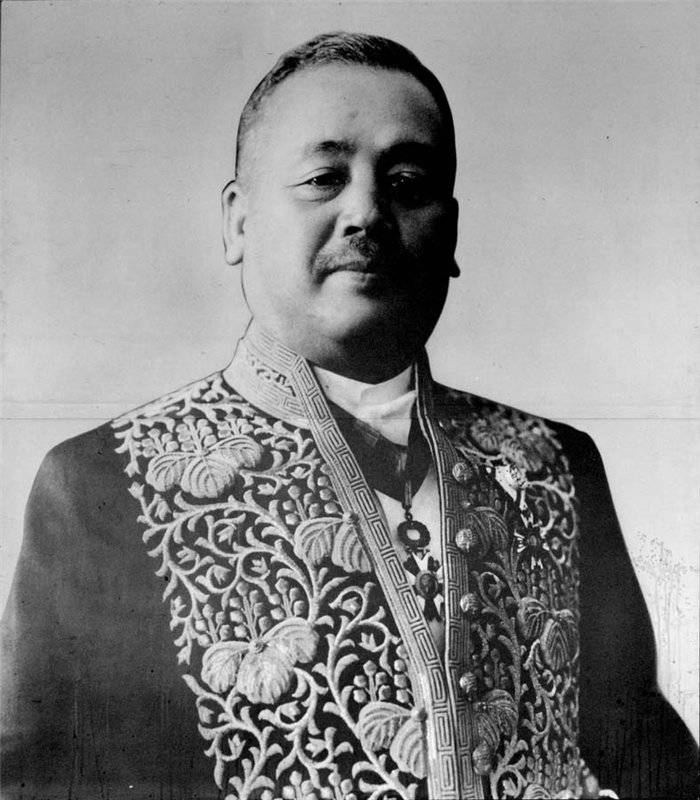 Nakajima
Kawanishi, however, soon decided to open his own company, as a result, Japan received two ambitious aircraft manufacturing companies for the price of one. This is to the existing at that time, “Mitsubishi” and others.

And in 1923, the first real Japanese aircraft carrier, "Hosho" ("Hosho"), entered service. And the Japanese were very lucky that in those days of battleships there was a man who appreciated the abilities of aircraft carriers and rendered great assistance in the development of this class of ships.

Everyone already understood that I mean captain Isoroku Yamamoto, at that time the commander of the Kasumigaura Naval Flight School. 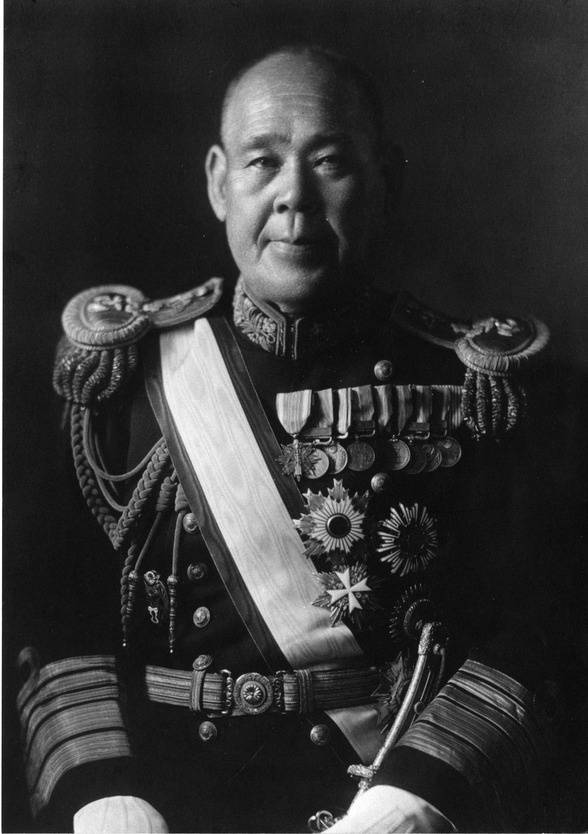 Aircraft manufacturing in Japan developed very original, in parallel and producing aircraft under license, and trying to design their own. There were many consultants invited from the West. Foreign advisers like Vogt (from Wright) at Kawasaki and Petty (from Blackburn) at Mitsubishi worked as best they could to improve the aircraft.

As a result of this policy, a bike went around the world stating that Japanese planes are poor copies of Western cars. This error completely satisfied the leaders of the Air Force and the army and the navy, and they did not do anything to refute it until the December 7 of 1941.

And on that rainy day for the American fleet, the B5N was one of those aircraft that was destined to dispel the myth that Japanese aviation was not capable of anything.

In general, it is impossible to say that B5N represented something epoch-making.

Yes, B5N had new items, including one that could argue for being one of the first folding-wing aircraft in Japanese naval aviation. Swivel nodes were placed so that the wing consoles overlapped one another. The drive hydraulic cylinders were placed in each wing in order to carry out folding mechanically. Also, the aircraft was equipped with newfangled Fowler flaps, which were issued back and down behind the rear edge of the wing, as well as a three-blade variable pitch propeller. That was, at least initially.

The prototype made its first flight in January of the 1937 of the year and reached a speed of 370 km / h. This was a very good indicator. But then the simplification of the design began. First, the mechanical folding of the wing was removed, replacing it with a manual one, then the Fowler type flaps mechanism was removed. It was decided to replace it with a simplified device, in which the entire section of the trailing edge turned down.

The variable pitch screw has been replaced by a constant screw. But at the same time, many suspension components were developed to provide the aircraft with the option of carrying bombs or torpedoes of its choice. Moreover, the replacement of these nodes could be performed by technical personnel directly on the deck of the aircraft carrier.

The pilot sat in front of the cockpit with poor forward visibility, which is normal for air-cooled engines. Since a good overview is a prerequisite for conducting operations on the deck, an elevator mechanism was made for the pilot's seat, raising it to a sufficient level in height.

The navigator / scorer / observer was located in the second cockpit facing forward and had a small window in both sides of the fuselage to monitor fuel consumption on the measuring glasses on the wings. To aim when dropping bombs, the navigator opened small doors in the floor. The radio operator / rear shooter sat with his machine gun, usually stored inside the cabin, at the rear.

Communication between crew members was carried out through a telephone pipe. The crew did not indulge in excesses such as oxygen equipment and all kinds of fancy radio stations.

In this form, the B5N entered the 1937 to serve in the aircraft of the Japanese fleet as a standard torpedo bomber and bomber, which it remained until the 1944 of the year. He was known as the Marine Deck Attack Bomber Type 97 Model 1. And during the war, the plane received the nickname "Kate." 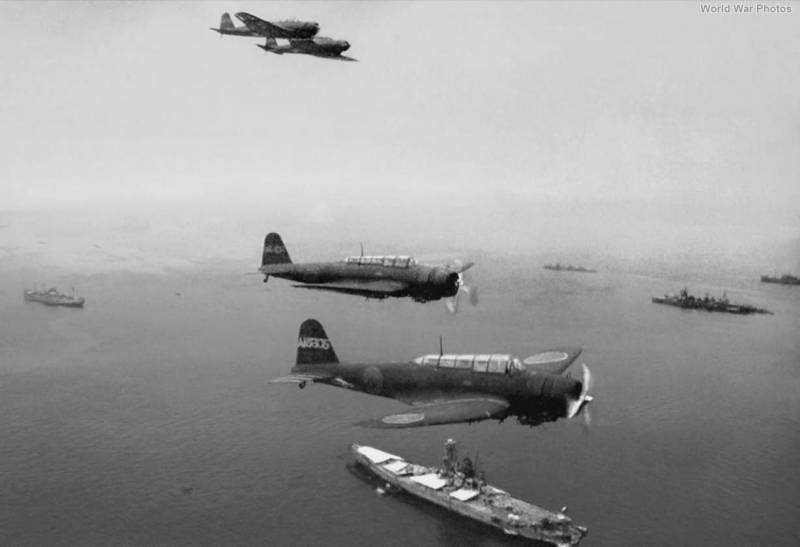 In general, I am not of the opinion that the B5N was something so flawed in terms of performance. If you look at what the Royal Navy of the United Kingdom was equipped with, for example, this is where sadness and longing for the full program are. Yes, I'm talking about the miserable Skua and Swordfish, who had to take on the first years of the war.

Although, of course, the Swordfish in Taranto staged a massacre not inferior to Pearl Harbor in terms of unit unit.

Yes, and the American SBD-3 "Dauntless" and TBD-1 "Devastator" cannot be said that the Japanese aircraft were utterly superior. Also, they did not shine frankly with characteristics.

But let us go directly not to the TTX and LTX, but to the use of aircraft for their intended purpose.

So, in November 1940 of the year, 21 “Swordfish” sank the 3 of the Italian battleship in Taranto Bay. It was like a signal for Yamamoto. "Everything is possible".

The Japanese very carefully studied the Taranto raid in detail, the sea attache of Japan in the UK, Minoru Genda, provided Yamamoto with a huge amount of information.

The preparations for the attack were excellent. Special torpedoes equipped with wooden keels, 406-mm naval armor-piercing shells with welded stabilizers - well, the results of the daring raid are known to everyone. 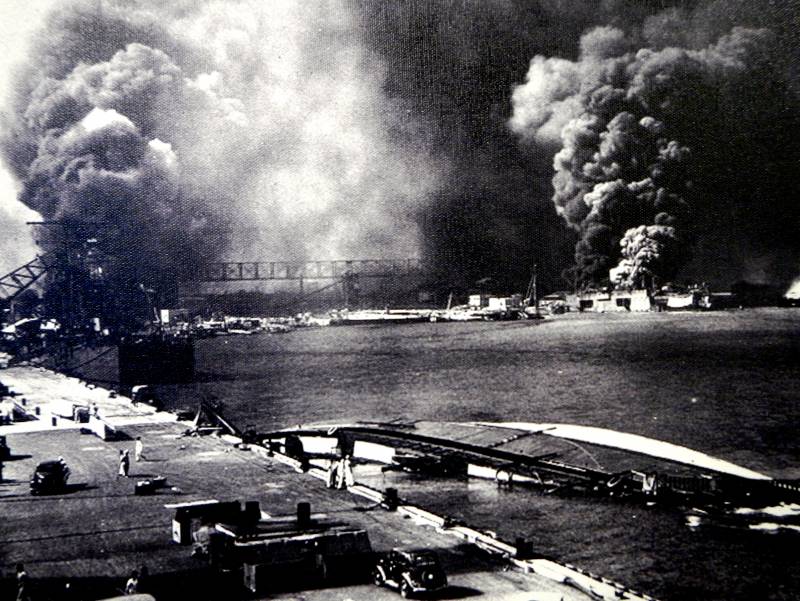 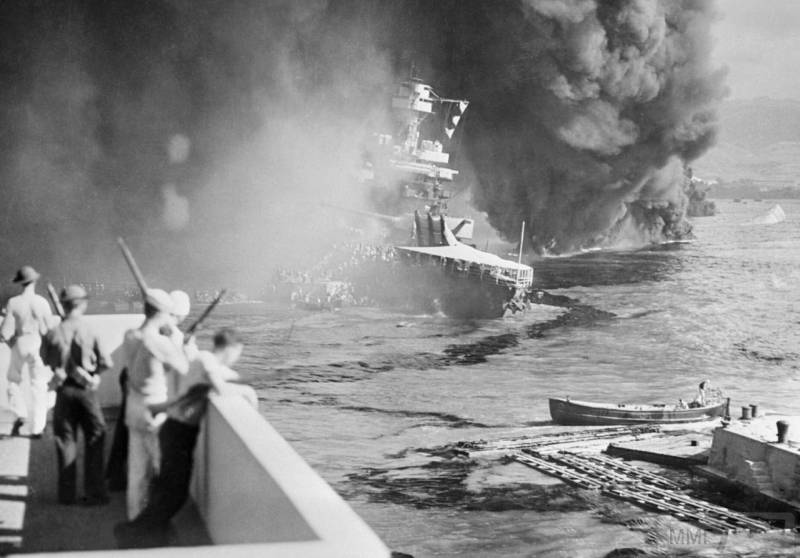 30% direct hits from torpedo bombers and 27% from bombers - this is serious. A high level of training plus surprise - and here you are not shining with the characteristics of the B5N together with their comrades carry the entire American fleet.

And then began the blitzkrieg of Japan in the Pacific. And B5N has become about the same tool in this blitzkrieg as the “Piece” of Ju-87 in Europe.

Dutch East India, Ceylon, Colombo and Trincomalee - our hero was noted everywhere. The aircraft carrier "Hermes", the cruiser "Hermes", "Dorsetshire" and "Cornwall" on the conscience of B5N.

Aircraft carrier Hornet. Despite not the best weather that could be used as a cover, and the presence of fighters, the Hornet was discovered and within ten minutes received five bomb and two torpedo hits in the engine rooms. And in the end he drowned.

Next, the B5N chopped up the Northampton heavy cruiser, which was about to be towed by an aircraft carrier that had lost its course.

In general, the bomber / torpedo bomber went through the whole war, from the first to the last day.

Even as a plane for kamikaze was involved. For “special attacks”, the most frequently used aircraft was A6M, but in 1945 and part of B5N was also used in suicide attacks from Okinawa.

After Midway and other battles, Japanese naval aviation no longer recovered from the loss of carrier ships. But B5N remained the plane that fought the whole war, until its end. 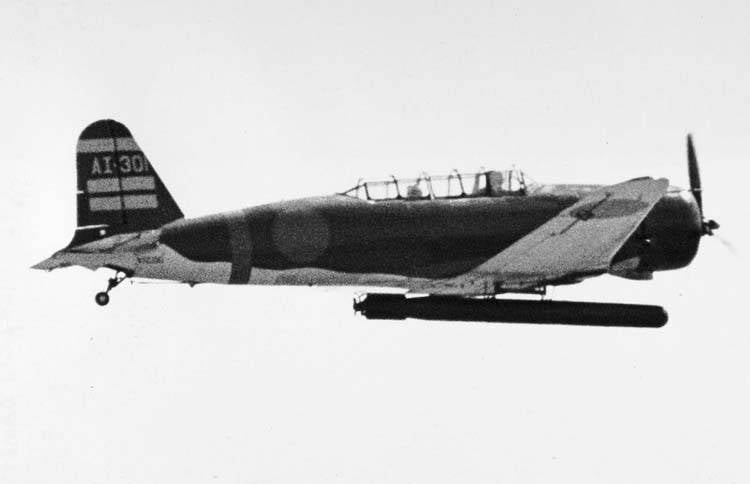 Agree, the characteristics are not impressive at all. But the fact is, the plane fought, and did it very effectively. 1200 units is a small series, definitely. And quite a few planes survived, but from the debut in 1938 in China to the summer of 1945, this suggests that the plane was pretty decent, despite the eternal Japanese jokes with armor and "extra" equipment.

It turns out that it is not always with an airplane that entered history, there must be exceptional LTX or a huge number of manufactured copies. It is possible otherwise: not by number.