At 76 kilometers. A new record of the range of fire of barrel artillery 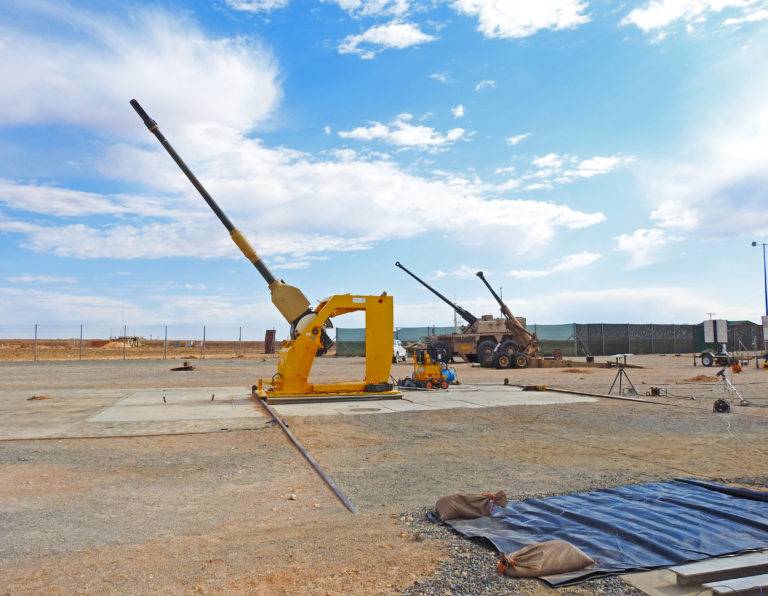 Artillery mounts at the Alcantpan training ground, photo by defenseweb.co.za

In the 21st century, artillery remains the “god of war”, being the main firearm of the ground forces, which can be equally effectively used both in defense and in offensive. At the same time, progress does not stand still, artillery systems and ammunition are constantly evolving and are still able to surprise. The other day, defenseweb published material on tests conducted in South Africa that set new records for ground-based artillery. During firing at the Alkantpan range in South Africa, it was possible to achieve the maximum firing range with an active-rocket projectile - 76280 meters.

Tests of new artillery ammunition using artillery systems in service were held at the Alkantpan training ground, located in the North Cape of South Africa, on November 6 2019 of the year. The tests in South Africa were attended by representatives of many manufacturers. weapons Western countries, as well as representatives of potential customers. The main goal of tests conducted at the beginning of November in the South African edition of Defense Web is the need to test in practice the capabilities of modern artillery, new shells, missile charges, detonators and detonators.

The tests were organized by Rheinmetall Denel Munition (RDM) in conjunction with subsidiaries Rheinmetall Waffe Munition (RWM), Rheinmetall Norway and Nitrochemie. It is worth noting that RDM is a joint company with 51 percent of the shares owned by the German Rheinmetall and 49 percent owned by the South African Denel. Currently, this company specializes in the design, development and production of medium and large-caliber artillery ammunition families and is one of the world leaders in the development of mortar, artillery and infantry combat systems. 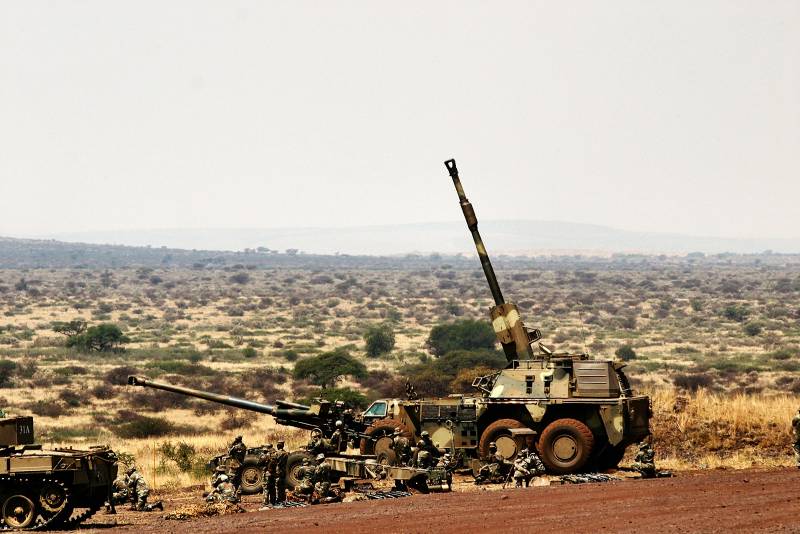 155-mm howitzer Denel G5 and Denel G6 armed forces of South Africa
RDM CEO Jan-Patrick Helmsen, welcoming all test participants, noted that, as a former combat officer, he perfectly understands the importance of developing modern artillery, improving the accuracy, safety and effectiveness of its firing. Jan-Patrick Helmsen noted that artillery is still an important weapon to support ground forces in both offensive and defense. At the same time, artillery shells and the installations themselves are cheaper than rocket weapons or air support for troops. An important advantage of artillery is that it can be easily deployed on the ground and used 24 hours a day, ensuring the destruction of enemy targets and objects outside the line of sight within the effective firing range. At the same time, the general director of RDM noted that in recent years there has been a growing demand for weapons capable of hitting enemy targets at a great distance, and the capabilities of modern barrel artillery are limited. Therefore, it is so important to develop the receiver systems in terms of increasing the firing range, which was demonstrated during tests conducted at the Alkantpan training ground.

In addition to the new artillery ammunition, the RDM representatives involved the following artillery systems for tests: a wheeled self-propelled 155-mm howitzer made in South Africa with a barrel length of 6 caliber, a towed 52-mm howitzer with guns made in Denel G155 with a barrel length of 5non launcher made in 39non launcher caliber mm German self-propelled howitzer PzH 155 with barrel length 2000 caliber. An important difference between these systems of one caliber in addition to the barrel length is the size of the charging chamber. So for a towed howitzer Denel G52 it is 5 liters, for a German self-propelled gun PzH 18 - 2000 liters, and for a South African wheeled self-propelled gun Denel G23 - 6 liters. Also used in the tests was the 25-mm mortar system MWS120 Ragnarok of Norwegian production by Rheinmetall Norway. This installation is designed to be placed on the chassis of various armored vehicles. The firing results of this system were not made public.

When firing used ammunition manufactured by Rheinmetall Denel Munition and Rheinmetall Waffe Munition. The first to be tested was an 155-mm high-explosive fragmentation projectile with a narrowed bottom of the RWM DM121 BT (Boat Tail). The towed howitzer Denel G5 showed the result of the 29171 meter, and the German monitors polygon installation PzH 2000 - 35882 meters. Both systems used the same full charge. It is worth noting that the Alkantpan training ground is equipped with a developed telemetry system, and tracking radar is also responsible for the accuracy of determining the distances reached by ammunition. At the same time, control of the test was provided by local and international military observers and representatives of defense industry enterprises, the official website of the RDM company notes. The PzH 2000 polygon firing range was also used for firing a serial projectile with the Assegai M0121 IHE BB bottom gas generator, which provided the maximum range of target destruction - 47374 meters. 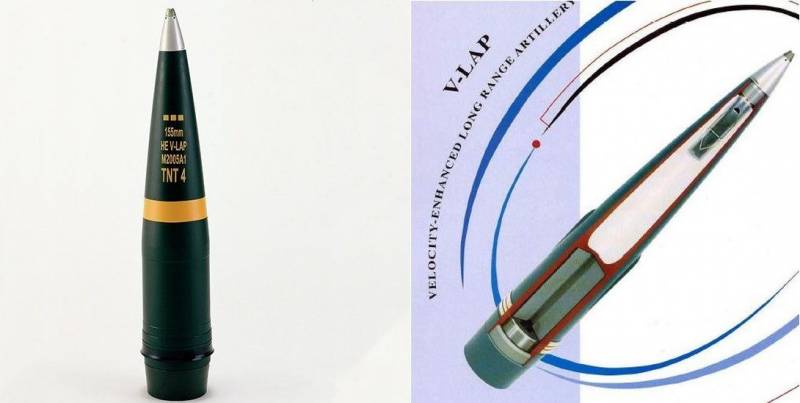 155 mm RDM M2005A1 V-LAP projectile
But of greatest interest to observers and experts was the new active-reactive ammunition manufactured by Rheinmetall Denel Munition. To conduct these tests, the representatives of the landfill had to negotiate with local farmers, since the boundaries of the landfill are limited, and the range of the new projectiles significantly extends beyond it. At the same time, demonstration firing with new active-reactive shells was carried out only using training (inert) ammunition.

Among others, they tested the mass-produced 155-mm active-rocket projectile with a bottom gas generator RDM M2005 Velocity Enhanced Artillery Projectile (V-LAP), which the manufacturing company calls today the most long-range projectile of all on the planet. Even when used with a towed howitzer G5 with not the largest barrel length of 39 calibers, the firing range of the projectile is very significant - 53 917 meters. With more advanced artillery systems, new shells were tested. For example, the Assegai M155 V-LAP projectile fired from an 2000-mm howitzer PzH 2005 launcher was overcome by 66 943 meters. And the new RDM M9703 V-LAP ammunition, which represents the further development of the previous Assegai M2005 shell and built in the same way, when firing from the G6-52 with a camera volume of 25 liters and the highest possible powder charge, showed an absolute record of firing range - 76280 meters.

According to the results of the demonstration firing conducted on November 6 on November 2019, the head of the RDM development department, Rod Keyser, expressed great pleasure, noting that even more impressive performance could have been achieved at the Alkantpan training ground if the testers were lucky with the headwind and crosswind speed. According to the representative of RDM, under favorable weather conditions one could count on the fact that the new M9703 V-LAP projectile could be sent to a range of approximately 80 kilometers. In the meantime, we can state the fact that the combination of German industrial and financial capabilities with South African technologies allowed companies to achieve a significant increase in the range, efficiency and accuracy of firing using classical barrel artillery.

During the tests, both the towed Denel G5 howitzer was used, the closest domestic analogue of which is the towed 152-mm howitzer MSTA-B, and the most modern examples of self-propelled artillery equipment - Denel G6 and PzH 2000. They should not compete with the Soviet / Russian 152-mm self-propelled guns MSTA-S with a barrel length of 47 calibers, but the more advanced Russian system Coalition-SV, which received a new 152-mm gun 2A88 with a barrel length of 52 caliber and an updated mechanism loading, which provides the installation of maximum rate of fire - up to 16 rounds per minute. 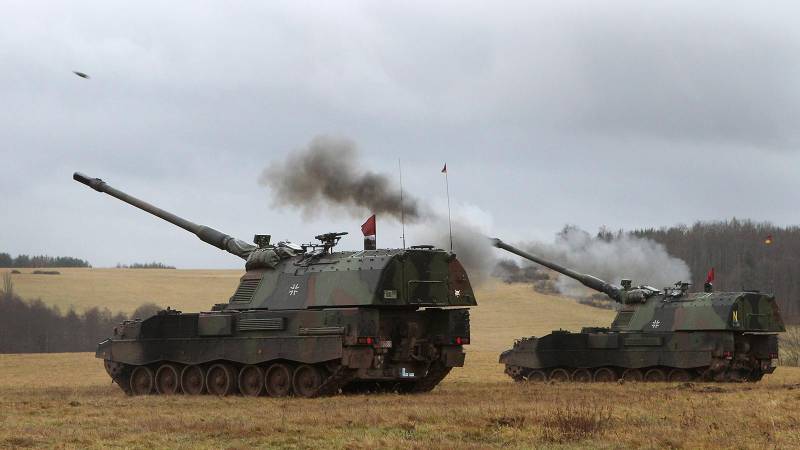 German 155 mm SPG PzH 2000 fires
South African self-propelled guns G6 "Rhino" (Rhino) is one of the best weapons that are manufactured today in South Africa, and one of the best artillery systems in the world. Self-propelled howitzer is in service with South Africa, and is also exported. The operators of this artillery system are the armies of the UAE and Oman. Built on the basis of an armored wheeled chassis with the 6x6 wheel arrangement, the self-propelled guns have been serially produced by the South African defense industry since the 1988 of the year. In the testing range for the new ammunition, one of the latest G6-52 howitzer modernizations, first shown in the 2003 year, was used. This installation is distinguished by a new gun with a barrel length of 52 caliber (previously 45 caliber). At the same time, versions with two charging cameras are available: the “JBMOU” version - 23 liters and “Extended Range” - 25 liters, which differ in different firing ranges of basic ammunition.

The German SPG PzH 2000 also belongs to the best representatives of its class and is actively exported to different countries of the world. The artillery mount created in 1998, like the latest Denel G6-52 model, is distinguished by the presence of a barrel of 52 caliber length and an automatic loading system, which provides the installation with high rate of fire and the ability to suppress targets in the “fire barrage” mode with one gun, sending one target to 5 shells flying along different trajectories. In addition to the German army, this self-propelled howitzer is in service with the armies of Italy, Greece, the Netherlands, Croatia, and Qatar. The closest operator of these howitzers for Russia is the Lithuanian army, which in 2015 acquired the 21 self-propelled gun PzH 2000 from the Bundeswehr. 16 howitzers are used by the Lithuanian army as linear, two as training vehicles, and three more as a source of spare parts.

We are in Yandex Zen
Green light for light artillery
Rheinmetall moves artillery ammunition manufacturing and testing to South Africa
155 comments
Information
Dear reader, to leave comments on the publication, you must to register.