SABER hybrid engine. For the atmosphere and for space 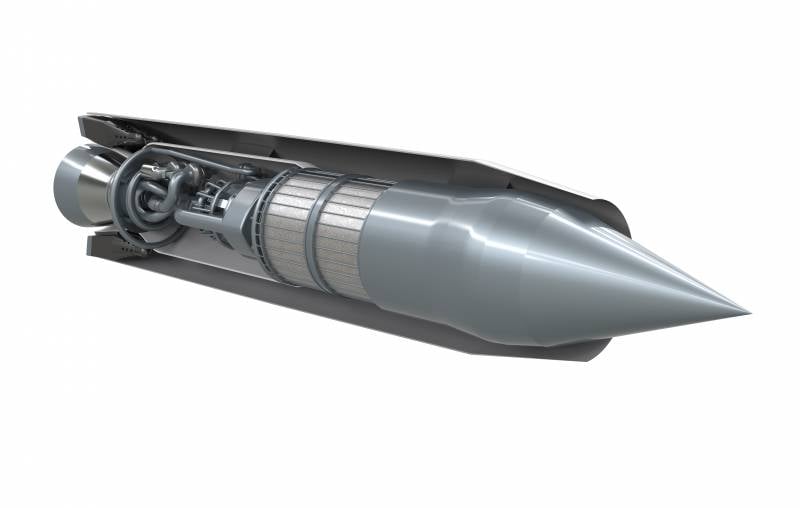 Over the past few years, the British company Reaction Engines Limited (REL), in collaboration with other organizations, has been developing the SABER (Synergetic Air Breathing Rocket Engine - Hybrid Air Rocket Engine) project. The aim of this project is to create a fundamentally new hybrid engine that can use atmospheric air and a liquid oxidizer. To date, the project has managed to show some success.

At the heart of the REL SABER engine concept are ideas embedded and partially tested back in the eighties. At that time, British experts were developing the HOTOL spacecraft, for which a LACE type hybrid engine was offered. That project could not be implemented, but his proposals found application in new developments.

Design SABER in its current form began at the turn of the last decades. Some studies have been carried out, which allowed to form the overall appearance of a hybrid engine and determine the ways of its development. In the future, REL managed to interest potential customers and get support, which accelerated the work. 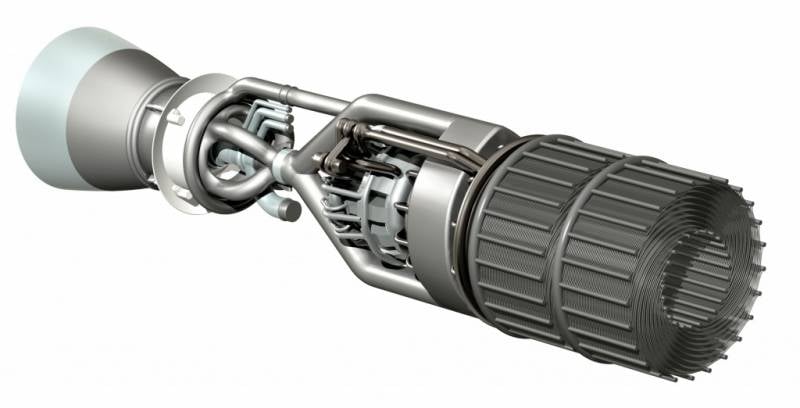 Indoor units without housing and fairing. From left to right: main combustion chamber, compressor and pre-cooler
To date, REL has developed the bulk of the design documentation and has begun testing individual engine components. To test products, we use two of our own test facilities in the UK and the USA.

Some components and concepts were tested in practice and proved their potential. In the near future, a full-fledged prototype hybrid engine should appear, including all tested components. His testing in the conditions of the stand will begin in 2020-21. The timing of the appearance of an engine suitable for installation on real aircraft remains unknown. This is likely to happen no earlier than the second half of the twenties.

The SABER product must operate in the atmosphere and beyond, developing the required traction and providing acceleration to high speeds. Such requirements have led to the need to use a special design with characteristic features. It contains elements typical of turbojet, ramjet and liquid rocket engines. Their use in different combinations allows you to have several modes of operation for different stages of flight. 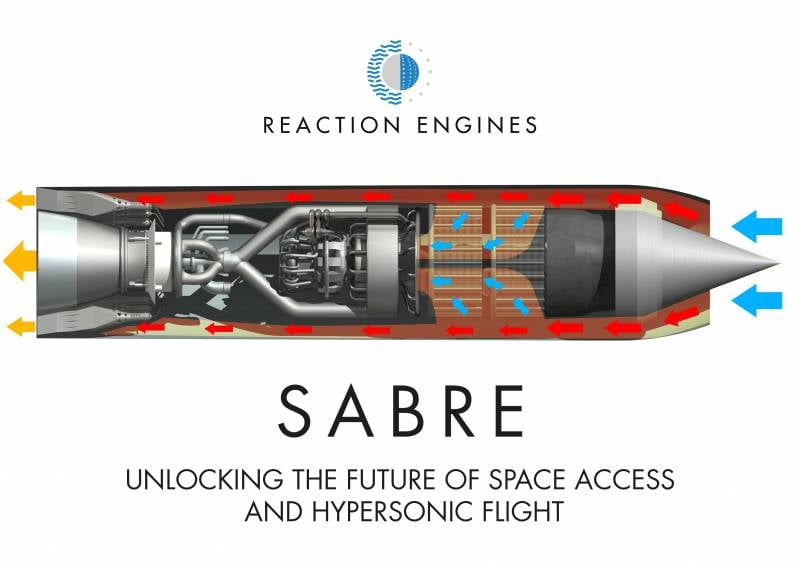 The principle of the engine in air-reactive mode. Small blue arrows indicate the movement of refrigerated air, red arrows indicate uncooled air supplied to the direct-flow chamber
The SABER engine includes several basic elements housed in a single housing. The head of the product is given under the frontal air intake with a central body. The latter is made in the form of a conical fairing and can be moved along the axis of the engine to change the air supply to the system. In certain modes, the air supply is completely shut off.

Directly behind the intake device is a cooling system for the incoming air. It is estimated that when flying at high speeds, the inlet air should be warmed to 1000 ° C or higher. A special pre-cooler with several thousand thin tubes filled with liquid helium should reduce air temperature to negative values ​​in fractions of a second. An anti-icing system is provided.

The central part of the engine is the so-called core - a special compressor designed to compress the incoming air before sending it to the combustion chamber. In this regard, SABER is similar to traditional turbojet engines, however, it does not have a turbine behind the combustion chamber and some other elements. The compressor is driven by a turbine that draws energy from the air cooling system.

The SABER combustion chamber is similar to fluid rocket engines. Using a turbopump, it is proposed to supply fuel and an oxidizing agent - gaseous air or liquid oxygen, depending on the operating mode. In both modes, liquefied hydrogen is used as fuel. 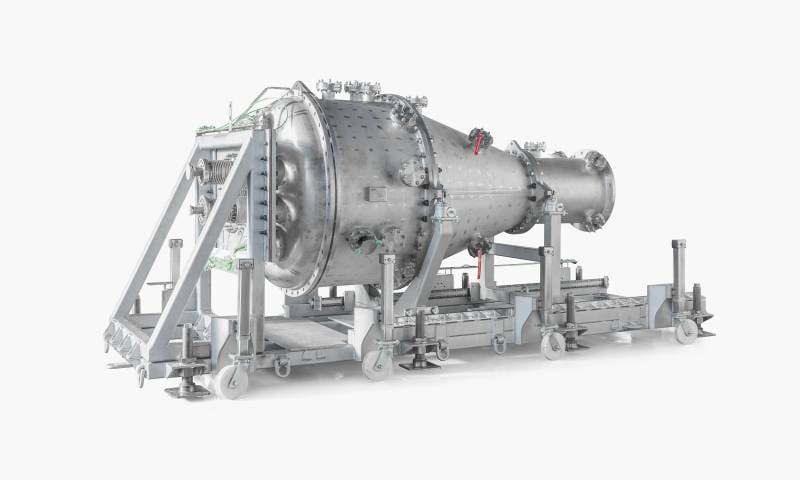 Now the goal of the SABER project is to develop a hybrid engine with sufficiently high performance and limited dimensions. The finished product should not be larger than the serial Pratt & Whitney F135 - no more than 5,6 m in length and less than 1,2 m in diameter. At the same time, versatility and high performance should be ensured.

Depending on the operating mode, this option SABER will be able to provide flight at speeds up to M = 25. The maximum thrust in "air" mode will reach 350 kN, in rocket mode - 500 kN. The main positive feature will be the ability to solve all problems with a single engine.

The SABER engine can be used on different classes of equipment, primarily on aerospace aircraft. The presence of several operating modes will provide the possibility of horizontal take-off and landing, flight in the atmosphere and exit into orbit. 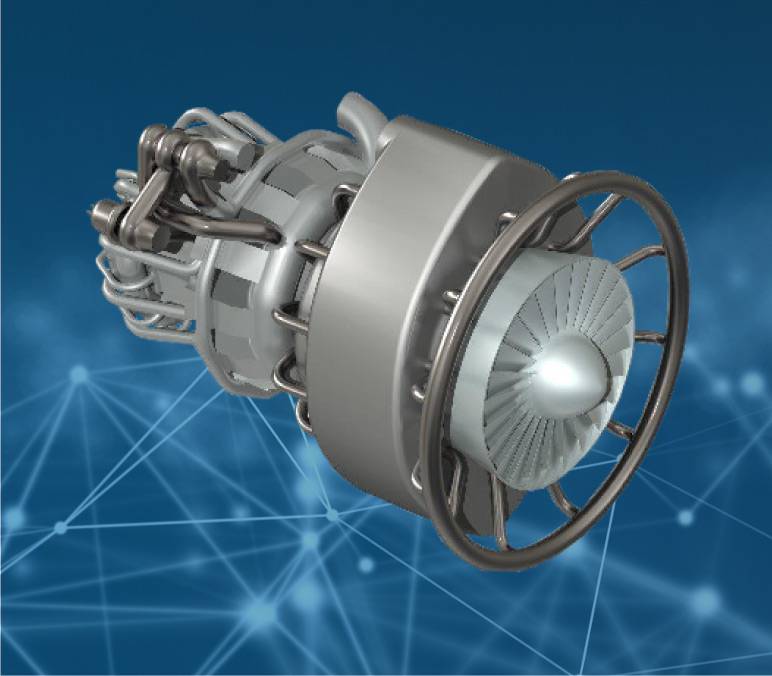 The "core" of the engine. Compressor impeller visible
Takeoff and flight in the atmosphere should be performed due to the first mode of engine operation. In this case, the air intake is open, and the “core” delivers compressed air to the combustion chamber. After acceleration to high supersonic speeds, a direct-flow combustion chamber is switched on. The use of two circuits, according to calculations, provides a flight speed of up to M = 5,4.

For further overclocking, the third mode is used. On it, the air intake is blocked, and liquid oxygen is supplied to the main combustion chamber. In fact, in this configuration, SABER becomes a semblance of a traditional rocket engine. This mode provides maximum flight performance.

While the hybrid engine from REL exists only in the form of documentation and individual units, but the scope of its application has already been identified. Such power plants should be of interest in the context of further development aviation and astronautics, including at the junction of these two directions.

SABER or a similar product will be useful in creating promising hypersonic atmospheric aircraft for various purposes. Using these technologies, you can create transport, passenger or combat aircraft. 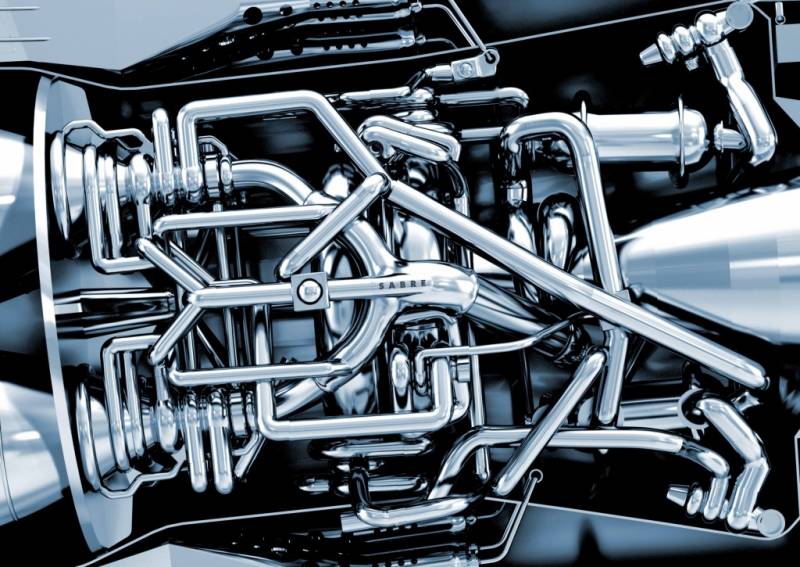 External units of the main combustion chamber
The full potential of a hybrid engine can be revealed with the help of an aerospace plane. In this case, SABER will provide horizontal take-off and landing, as well as access to the required altitudes, followed by acceleration and flight to orbit. A spacecraft with hybrid engines should have important advantages that simplify its operation.

SABER developments can be implemented as separate components. Thus, REL believes that the developed cooling system for the incoming air can be used to modernize existing or to develop promising turbojet engines. The most interesting results from this can be obtained in the field of high-speed aviation.

At its core, the SABER project offers a set of key technologies for building a hybrid multi-mode engine. Based on them, you can create a real product of the required dimensions with the given characteristics. For the first tests, a medium-sized SABER with high performance is created. If there is interest on the part of customers, new modifications may appear that meet specific requirements.

The first research and testing in the framework of the SABER project took place at the beginning of the tenth years and was intended to search for optimal design solutions. To date, REL has completed the development of the project and has begun the process of testing individual components of the hybrid engine.

Cooler on the stand. The main features of his work are indicated.
A few weeks ago, the development company announced a bench test of the air cooling system. During the test, the air velocity at the inlet to the device reached M = 5, the temperature - 1000 ° C. It is reported that the experimental product successfully completed its tasks and provided a sharp and rapid decrease in flow temperature. However, specific numbers were not called.

Checks for other engine components were previously reported. The completion of all these activities allows REL to proceed with the assembly of a full-fledged pilot engine. Its appearance is expected in 2020-21. Then, bench tests will be held, according to the results of which it will be possible to determine the real development prospects.

Reaction Engines Limited praises its new project and believes it has a great future. How objective such estimates are and whether they correspond to reality is not completely clear. The answer to such questions can be given only a few years after the completion of all necessary measures and the creation of a real aircraft with SABER engines.