Another "light" of "Poseidon" 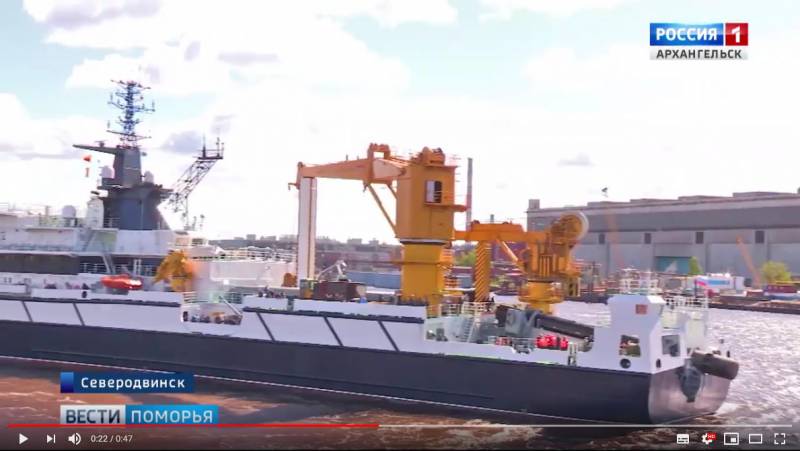 Mr. Sutton, a fairly well-known scholar of the topic of secret submarine warfare, sabotage submarine forces and assets, and submarines in general, both conventional and sabotage, the author of books and directories on such products, published in Forbes a very interesting article about the next " light "associated with a" self-propelled underwater vehicle "of unlimited radius with a nuclear power plant" Poseidon "(considered to have the code GRAU 2М39) system weaponsknown as "Status-6". Or with one of the systems related to Poseidon.

There were even publications on the site where the authors considered 2М39 a "hoax", "a cut of money" or something far from reality. But this program is real and very close to successful completion. And in general, a “hoax” that lasts (without ancestor programs) from the beginning of the 90's, on which three submarines have already been built, of which two are nuclear, at least another 3 or 4 will be built, and not only them! However, “a happy horseshoe doesn’t care whether you believe in it or not - it already works,” as one smart man of Anglo-Saxon nationality used to say, so little depends on faith.

Mr. Sutton’s article is entitled “Video suggests that the Russian Poseidon has a version launched from the seabed.” What kind of video are you talking about? About the news story of the GTRK "Pomorie" - the Arkhangelsk branch of VGTRK. The plot was released on the channel on 4 of June this year - in any case, it appeared on the YouTube channel "Pomerania" just then ("Academician Alexandrov" at the final stage of testing ) And until recently, this plot had less than 400 views (now there are already thousands under 1,5, which is also very little). It was not Sutton himself who found it, but a certain Twitter user. The plot talked about reaching the final stage of testing the oceanographic research vessel (OIP) of the 20183 project "Academician Aleksandrov", which was freshly built at the Severodvinsk Zvezdochka, built at the request of that same GUI Navy.

The reinforced ice class vessel with a displacement of 5800 tons is officially intended for research and scientific work on the shelf of the Arctic seas, ensuring the operation of Arctic marine equipment, rescue operations in the Arctic. OIC is able to monitor areas of activity fleet, areas of testing, locations of potentially dangerous bottom objects, areas of economic activity, install bottom navigation, control and measuring and other equipment in them.

The dual purpose of the vessel allows search and rescue operations, dredging, towing, installation and reloading of military and special equipment, inspection and recovery of sunken marine equipment, including objects of potential or actual environmental danger. So, in any case, officially reported. But the mere fact that the ship belongs to the GUGI already leads to suspicions. The vessel is the third sistership in the series launched by the Zvezdochka vessel, of the 20180 project, initially declared as "universal naval armament transport", then re-qualified as an "ice-class rescue tugboat designed for search and rescue operations, ensuring testing of naval weapons and equipment" . Also, the vessel can search, examine sunken objects, for which it carries on board an inhabited self-propelled deep-sea rescue vehicle of the Bester type and uninhabited types of the Tiger and Quantum.

Serves "Asterisk" in the Northern Fleet, in the White Sea Navy. The next in the series was “Maritime Arms Transport” (MTV) of the Akademik Kovalev Ave. The change in numbers is associated with import substitution and the replacement of a number of important ship units and systems with Russian ones. The vessel “Akademik Makeev” of the 20180TV project (again MTV, but “import-substituted”), with the expected commissioning date next year, will test it soon. And the fifth ship, “Academician Laverov”, has not yet been laid.

As we can see, 4 of the 5 ships are named after unconditionally great people, connected by one topic. We are talking about a nuclear missile shield and a sword of our Motherland. Academician Makeev was the general designer of naval strategic missile systems, which created, in fact, most of the domestic SLBMs. And the current Sineva-Liner SLBM R-29РМУ2.1 is also the successor of the Makeevka R-29РМ design, the adoption of which V.P. Makeev did not see. Is that the P-30 "Bulava" stands apart, and then, it would be unlikely that without Makeevka luggage would have been created. Academician A.P. Aleksandrov is one of the creators of the USSR atomic project and an associate of the famous Beard - Kurchatov. On his initiative, nuclear power plants were created for the first atomic icebreaker "Lenin" and our first nuclear submarine K-3. And for the rest too, by the way. He was engaged in the topic of liquid helium and superconductivity, was the supervisor of one of our most powerful reactors for nuclear power plants - RBMK-1000. Academician S.N. Kovalev is the permanent general designer of domestic SSBNs, from the 658 project to the 941 project, and 92 submarine nuclear submarines were built on his projects. Well, Academician N.P. Laverov also from the same galaxy - he did a lot to solve issues with uranium ores and ensure the complete independence of our country in a strategically important issue (he did a lot of things, including even studying climate change, and proved quite clearly that the so-called "global warming "- a myth, a fairy tale for fools and politicians).

But back to the plot and OIC "Academician Alexandrov." In this story, we see that at the stern of the ship, right in the transom cutout, there is a huge "product", very similar to the "Poseidon" in caliber and length. But before the vessel was not mentioned in connection with the Status-6 program, Sutton notes. Although the lead “Zvezdochka” back in 2014, when there was still more than a year left until the first specially controlled discharge of “Status”, it participated in some tests of the “new weapon” in cooperation with the experimental submarine B-90 “Sarov”, which is now known as a test base for Poseidon and his friends. Mr. Sutton believes that the entire series of these vessels is probably connected with the Status-6 program, or with it and other top-secret projects under the patronage of the Navy GUGI. And Zvyozdochka, in his opinion, quite coping with the tasks of catching Poseidon prototypes after testing and delivering them to the coastal base, obviously, can not cope with more capacious tasks of the program. Therefore, it required an "oceanographer" with a large covered hangar on it, which would fit such a weapon as the "Poseidon". In addition, the Academician Aleksandrov is equipped with a unique set of cranes, including deep-sea cranes and a large deck crane with a carrying capacity of more than 100 tons. It is considered by many, including Sutton, that the approximate weight of the 25 meter torpedo is about 1,5 m in caliber and is located in approximately this area. In addition, the video shows that the product can both be advanced from its position at the stern in the transom cutout into the water, and can be taken out of the water. Probably, it gets to the stern from the very hangar, where it prepares for launch or is serviced after returning. 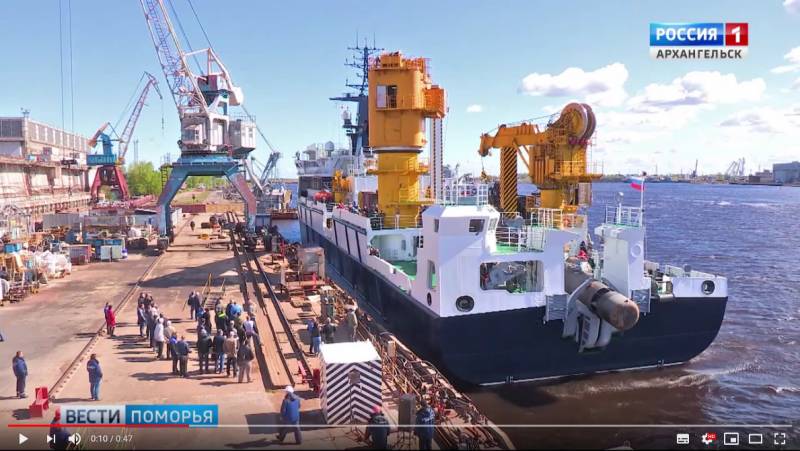 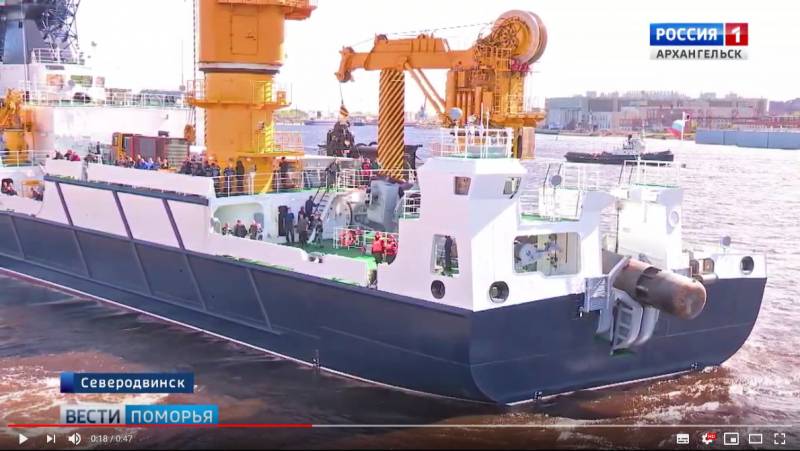 Screenshots from the video of GTRK "Pomorie", where you can see a product similar in size to "Poseidon"
Sutton explains the differences in the appearance of the product at the stern and the very presence of such a ship by the fact that what we see in the video is not the “Poseidon” for the submarine’s torpedo tubes, but a different version of the products. The American believes that we are talking about "Scythian" (this mysterious product became known even before the appearance of the first fragmentary information about the "Status-6"). According to one version, “Scythian” is “Poseidon”. According to another, this is the bottom version of Poseidon, that is, in advance in a special period, placed somewhere on the sea’s bottom from the carrier’s base, from where, upon receipt of the order, it starts towards the target. Such a self-transporting mine torpedo, but vice versa. According to the third version, this is not a super torpedo, but an ICBM of a bottom launch (which pops up before launch in a transport and launch container to the surface). There are other versions. Sutton believes that this is the second version - the bottom version of the giant torpedo. However, the idea of ​​ground rockets and even torpedoes in itself contains a lot of reasons for criticism. For example, how to ensure the safety and integrity of products before launch? How to serve? But how to take products back if they were not needed (the war did not start)? All these issues are, in principle, resolvable, but especially in the case of ICBMs there are too many of them, and the sheepskin may not be worth the cost. With a torpedo it’s easier, especially if the vessel is of an ice class - it will be even more difficult for the enemy to find them in the Arctic than elsewhere, but there are enough questions there that are difficult to find.

As for the product (or layout) at the stern of Aleksandrov, maybe it’s not about any bottom version (if it exists at all)? Maybe this is one of the options for Poseidon, say, equipped not with different thermonuclear warheads of different (large or special) power, but equipped with, for example, search engines? Such an option was once reported not so long ago, but as peaceful, but it may well be that the device is simply being created to ensure the combat operation of the Poseidon itself. Search for targets for hiding in-depth drums, control smaller underwater search drones and the like. This version seems to be quite adequate. Other options are possible - we, in the end, know little about all the potential capabilities of such devices and the variety of its options.

There is one more question: why, in fact, such a "drain" of information about the appointment of "Academician Aleksandrov" was allowed? Perhaps, of course, this is an accidental puncture - they did not keep track. But with the topic of this level of secrecy, even after the disclosure of part of the general information on it, this seems unlikely, although this happens. But perhaps it was just such a delayed in time leak (not very successful, because random people found the information by chance), which should eventually get to someone on the table in Washington. In order to be smarter and more accommodating and not act to the detriment of the United States first of all by its extremely ill-considered actions in the field of strategic stability, in particular, to extend the START-3. And then suddenly some other “leak” will happen, and quite someone with a heart will burst into flames on the Potomac. We still have a lot of things in the storeroom.

Ctrl Enter
Noticed oshЫbku Highlight text and press. Ctrl + Enter
We are
"Poseidon" will go into battle, guided by the seabedKill Kanyon: countering the new Russian intercontinental nuclear torpedo
135 comments
Information
Dear reader, to leave comments on the publication, you must to register.