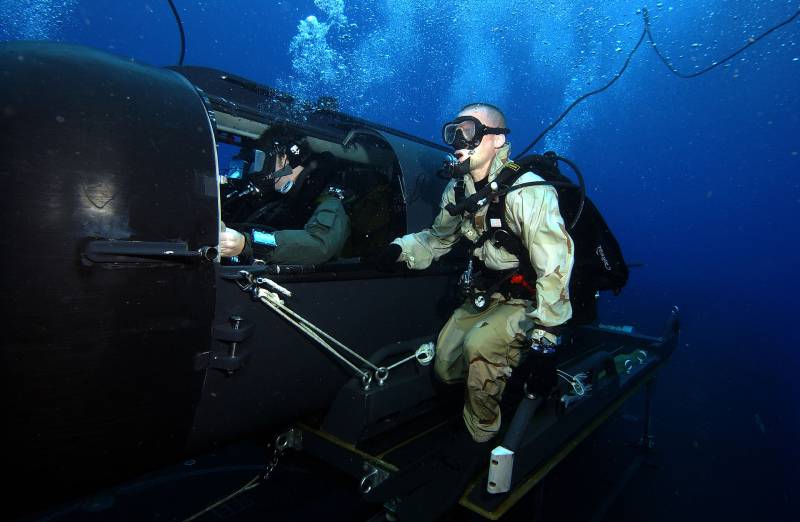 In the realities of today, combat swimmers and naval special forces are the real elite of the armed forces. Large sums of money and technical resources are spent on equipping and equipping such parts. Especially for them, unusual weapons are being developed, such as the Russian two-medium ADS rifle-grenade launcher system, and special vehicles, which are ultra-small submarines. One of the most famous American developments in this area is the ultra-small carrier submarine for combat swimmers SDV Mark 8 Mod 1.

A small excursion into the history of ultra-small submarines

Like many models of weapons and military equipment, ultra-small submarines for combat swimmers lead their history from the second world war. It was during the war that the Italian and Japanese miniature submarines made their debut. These two countries are more advanced than others in creating an unusual marine weapons. In Italy, the ultra-small submarines of the CB and CA series were created, which were equipped with torpedo weapons and could land combat swimmers, as well as small man-torpedoes or SLC guided torpedoes, called Mayals. During the war years, Italians managed to launch 80 of such guided torpedoes. And the miniature submarines they created were actively used on the Black Sea and even chalked up several victories; at least two cases of sinking of Soviet submarines by them are known.

Japan also succeeded in creating ultra-small submarines, which is not surprising, given the marine orientation of the development of the armed forces of this country. Like Italy, the Japanese imperial fleet were armed with various models of miniature submarines, as well as guided man-torpedoes, while in the Japanese version they were “Kaiten” torpedoes controlled by a suicide pilot. During the fighting, they showed themselves to be very inefficient weapons. 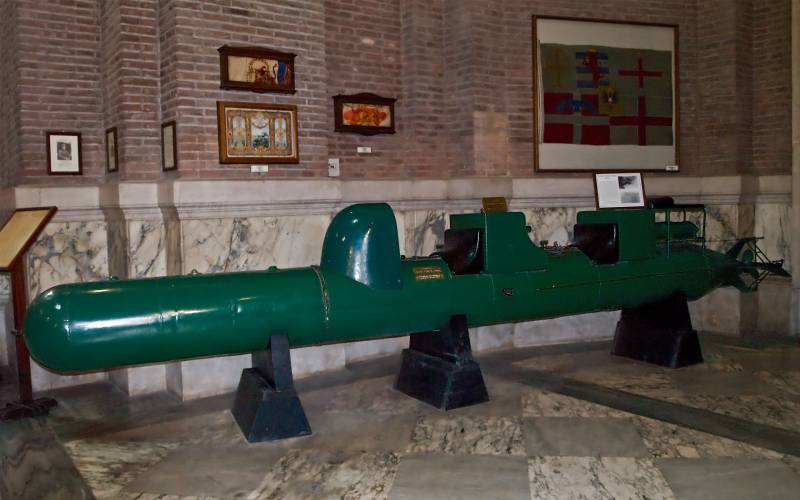 Italian guided torpedo "Mayale"
The same can be said about Japanese mini-submarines, which, although actively used in sabotage, could not inflict serious damage on the enemy. The first experience of their use during the attack on Pearl Harbor was unsuccessful, the boats did not reach their goals. Despite the not very successful combat debut in the post-war years at the height of the Cold War, the projects of Italian and Japanese engineers helped to develop new underwater vehicles. First of all, submarine delivery vehicles for combat swimmers and special forces of the fleet.

Typical tasks for such devices is to conduct covert, secret missions in restricted areas. We are talking about naval bases, ports, areas of the sea coast, which are occupied and controlled by the enemy or military activity near which is undesirable, as it can attract too much attention and provide political problems and irritation to the world community. Such mini-submarines can be used for diversionary operations, allowing combat swimmers to set mines on ships and port infrastructure facilities, reconnaissance of the seabed and its mapping, reconnaissance and search for sunken objects. The Americans used their SDV during both wars in Iraq. Among the tasks they solved were the protection of offshore oil and gas terminals, the clearance of Iraqi mines, as well as hydrographic reconnaissance. 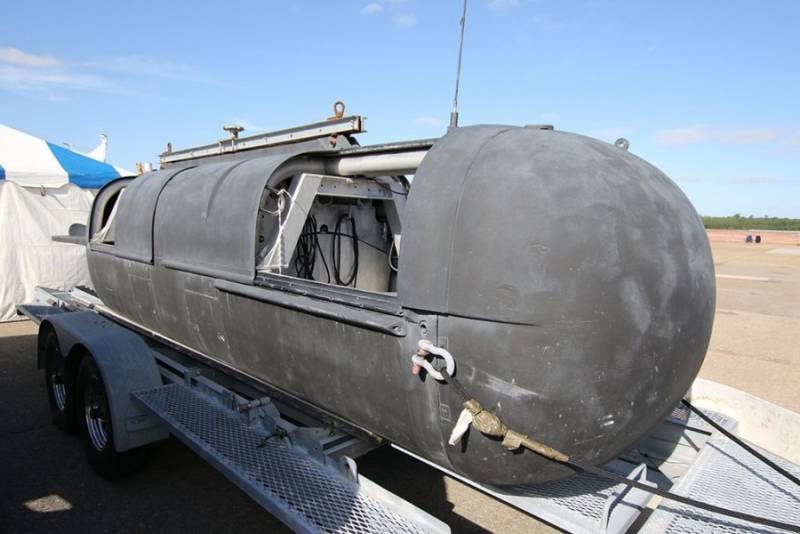 SDV Mark 8 Mod 1
SDV Mark 8 Mod 1 are used to transport two crew members: a pilot and co-pilot / navigator, as well as teams of four combat swimmers and their equipment. In this case, both pilots are usually also part of a group of combat swimmers. The maximum length of the mini-submarine does not exceed 6,4 meters, diameter - 1,8 meters, displacement - 18 tons. On board the boat there is an electric motor that is powered by lithium-ion batteries. The electric motor drives a single screw. Due to the small size and movement only due to the electric motor with almost complete absence of moving parts, such transports are very difficult to detect with sonars.

The battery and motor power are enough to accelerate a small submarine transport to a maximum speed of 6 knots (approximately 11 km / h), while the cruising speed is 4 knots (approximately 7,5 km / h). The device is able to work from 8 to 12 hours and provides a combat radius of approximately 28-33 km. In this case, the real limitation is not the capacity of the battery batteries or air supplies for combat swimmers, but the temperature of the surrounding water. Since swimmers move in the “wet” version, and the submarines themselves are open, their activity is limited by the temperature of the water. The colder the water, the less time even in the most modern wetsuits fighters can spend on board such a device. To carry out long-distance missions, all SDVs can additionally carry on their board supplies of compressed air to replenish air tanks or insulating breathing apparatus of combat swimmers.

At the same time, there are two types of vehicles in the US Navy: “wet”, like SDV Mark 8 Mod 1 and “dry”, like Advanced SEAL Delivery System (ASDS). The last unit is a larger mini-submarine with a displacement of the order of 30 tons. When using ASDS, fighters move in its hull, almost like in a submarine bus. 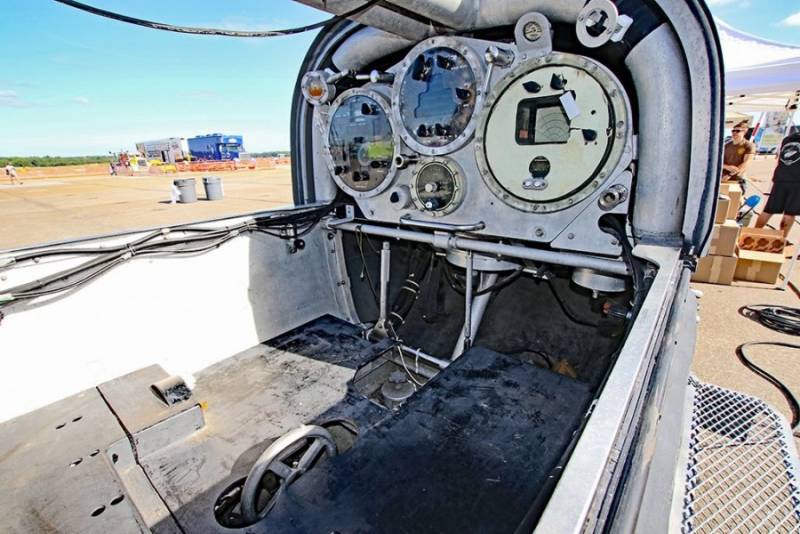 SDV Mark 8 Mod 1
All devices SDV Mark 8 Mod 1 received a serious set of on-board equipment and electronics. They are equipped with a Doppler inertial navigation system, high-frequency sonar designed to bypass obstacles and sea mines, as well as navigation under water, GPS system. Updates regarding new batteries, materials, streamlined shape and electronics have significantly increased the capabilities of the SDV Mark 8 Mod 1 devices compared to the predecessors of Mod 0. A feature of these mini-submarines for combat swimmers was the rejection of plastic-reinforced fiberglass in favor of a more traditional aluminum hull. Such a solution made it possible to increase the strength and capacity of the devices, and also provided the possibility of landing from a small height from the side of transport helicopters. Then, combat swimmers descend on the water, who are placed on board the SDV and begin to carry out their combat mission. 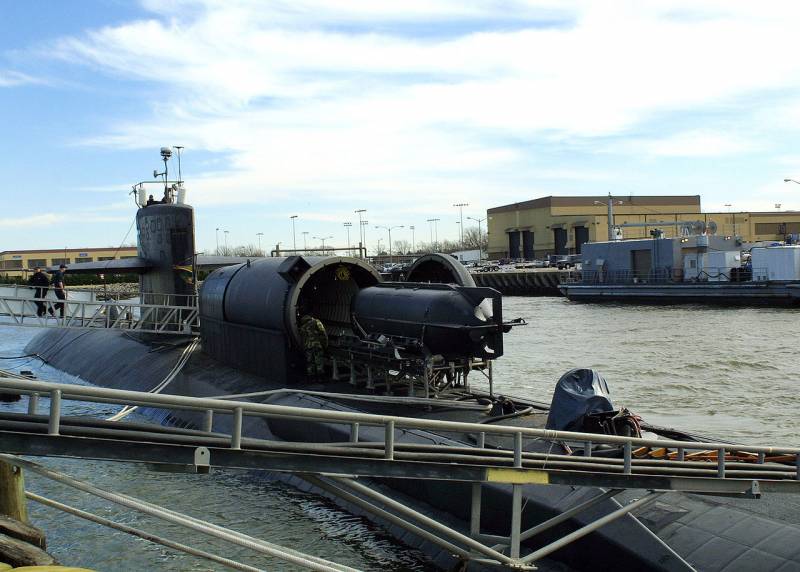 Loading the SDV into the DDS Dock Camera Hangar
As a means of transporting miniature boats and combat swimmers in the United States, special detachable dock cameras - DDS (Dry Deck Shelter) were developed. They are small removable container modules equipped with a hangar gateway to exit combat swimmers from the submarine. The hangar can accommodate at least one special vehicle for SDV swimmers, up to four ordinary rubber boats and up to 20 combat swimmers, or other special equipment. The very concept of such modules was formulated in the 1970 years. And already in 1982, the Electric Boat Division, part of the large American corporation General Dynamics, released the first docking camera, which received the DDS-01S index

The length of such a module is approximately 11,6 meters, diameter - 2,74 meters, maximum displacement - about 30 tons. The docking chamber is divided into three airtight compartments. After re-equipment, strategic submarines could take on board two such modules, multipurpose submarines - one module each. The front compartment of the module is distinguished by its spherical shape and is a decompression chamber. The middle compartment, also having a spherical shape, is designed to connect the compartments of the docking chamber itself and the adapter gateway located on the submarine’s hull. The third compartment is the largest in size, it has a hangar for transporting boats and cargo. Inside the dock chamber, as well as on board the submarine, atmospheric pressure is maintained. In this case, the module can be used for its intended purpose at depths of up to 40 meters. 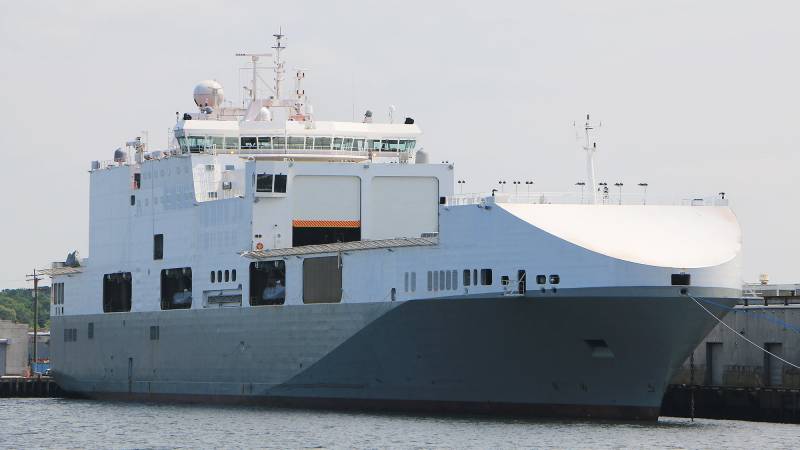 US Navy Special Operations Forces Ocean Trader
Another carrier of mini-submarines for combat swimmers is the special-purpose vessel “Ocean Trader”, which belongs to the class of front-line ships of the Special Forces of the United States Navy and is today one of the most unusual and secret combat ships. The Americans altered for these purposes an ordinary civilian roller - a vessel for transporting goods on a wheelbase. All helicopters available to the US Navy MTR, including the MH-53E Sea Stallion, as well as the V-22 Ospreys convertoplanes, can land on a new warship. It is even possible to base on board Apache combat attack helicopters. The ship also has a special ramp for launching unmanned aerial vehicles used for reconnaissance. There is a special lock chamber on the ship, which allows you to use the mini-submarines SDV Mark 8 Mod 1.

We are in Yandex Zen
Means of deployment of marine special forces
French delivery unit SWUV swimmers
8 comments
Information
Dear reader, to leave comments on the publication, you must to register.