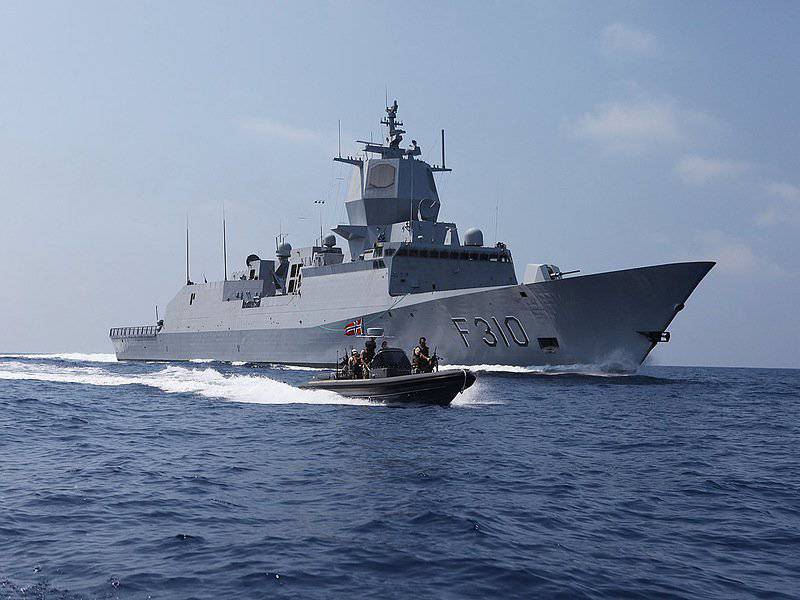 The northernmost state of the European Union, a country of fjords, mountains and glaciers. One of the main contenders for the natural resources of the Arctic. Meet the beautiful Norway. Since you and I are not ordinary tourists, but amateurs naval stories, I invite readers today to make a small overview of the modern Royal Norwegian Navy (Kongelige Norske Marine).

Old but not good friend

In the North, there is no naval officer who does not know who Marjata is. Sailors jokingly include the "Mashka" in the composition of the Northern Fleet, because it spends more time on landfills in the Barents Sea than our ships.

A rare way to accomplish the tasks of combat training goes without meeting this lady. “Maryata” often enters closed areas and interferes with the performance of combat exercises, measures the fields and parameters of our stations, intercepts radio signals and monitors the testing of new systems. 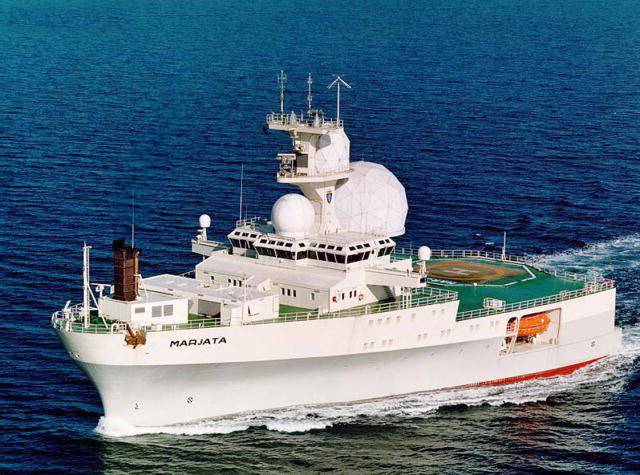 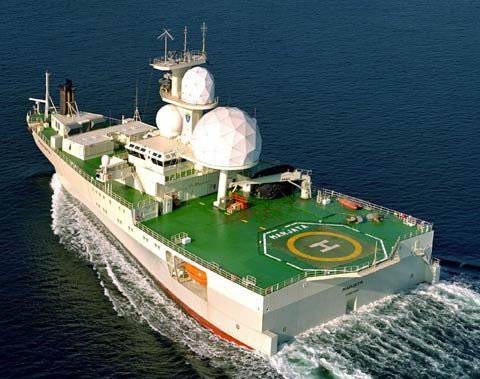 So, F / S "Marjata", a specialized electronic intelligence craft, is the third generation. During the Cold War, they were positioned solely as peaceful research ships. The modern “Maryata” is on the balance of E-tjenesten - Norwegian military intelligence, the year of entry into operation - 1995.

The length of the ship on the KVL is 72 meters, the maximum width is 40 meters. Full displacement reaches 7560 tons. Speed ​​- 15 nodes. Crew - 45 people: 14 people manage the ship, the rest - the technical staff and liaison officers. According to data provided by E-tjenesten, the crew of the Maryaty consists only of American specialists.

As you have already noticed, the case of “Maryaty” has an unusual shape, made in the form of an “iron” (Ramform-type ship design). “Maryata” was created specifically for solving reconnaissance tasks - for the stable operation of reconnaissance equipment it was necessary to ensure the high stability of the ship. In order not to interfere with the recording of measurements, great attention is paid to reducing the noise level and vibration of the ship's mechanisms. "Maryata" is equipped with everything necessary for long-term work in the harsh conditions of the Arctic, all radio-electronic systems on the deck are protected by insulating shells. Any information about the reconnaissance "stuffing" of the ship is missing. 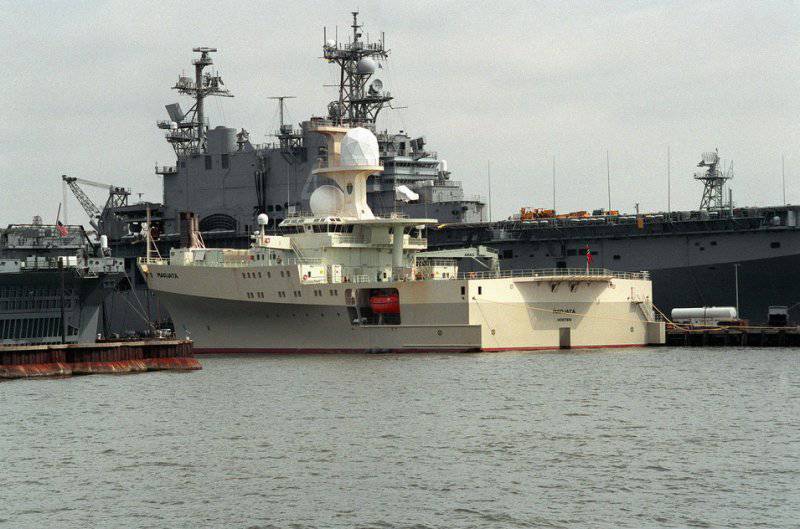 And Masha is not simple. Naval bank norfolk, virginia

Despite its American crew and the performance of combat missions in the interests of NATO, the “Maryata” was built by the Norwegians and is based in Kirkenes (in 8 km from the Russian-Norwegian border). Walks under the flag of the Norwegian Navy and often impersonating a research vessel.
Recently, the main area of ​​activity of "Maryaty" is located between 34 - 36 degrees east longitude, in an area located in close proximity to the border of the territorial waters of Russia. For example, in the period from March to May 2007, the Norwegian “iron with eggs” made 10 reconnaissance trips here! Our sailors found that the Maryaty equipment allows radio interception at a distance of up to 500 km, in other words, the “iron” completely controls the situation in the Barents Sea.

In 2010, Norwegian Intelligence began a conversation about building the fourth generation of the Marijata ships. Severomortsy, vigilantly tripled!

New conquerors of the Arctic

By the end of the twentieth century, the fleet of the great Viking navigators was a sad sight. The richest country in the world, with the highest standard of living of the population, did not have a single modern warship. Oslo frigates, built back in the 60s, despite powerful and diverse weapons, regular upgrades and competent service, could not fully meet modern requirements. And nothing more serious at the Royal Norwegian Navy at the turn of the 2000-x was not. Small rocket boats (14 units), patrol ships and several minesweepers with a fiberglass hull could only be effectively used to protect the coastal zone. The situation was partly saved by 6 diesel submarines of the Ula type, built in Germany at the end of the 1980's.

The Norwegians began searching for a suitable replacement for their ancient frigates. Aegis-destroyer type “Orly Burk” looked very attractive, especially as the Americans did not object to the transfer of “Aegis” technology to their NATO partners. But, by carefully analyzing the geopolitical situation, possible options for the use of the Navy and the tactical and technical characteristics of various foreign structures, the sailors came to the conclusion that the “Orly Burk” does not meet the interests of the Norwegian Navy: it is too large, excessively powerful, and therefore expensive. The most advantageous was the option to create your own frigate with the Aegis system based on Spanish warships of the Alvaro de Bazan type - reduced copies of the Orly Berkov. It was decided to cooperate with Spain.
For several years, the technical design was ready, and in the period from 2006 to 2011, the Norwegian Navy included five new frigates of the Fridtjof Nansen type. All five warships are named after the great Norwegian travelers: Nansen, Amundsen, Sverdrup, Ingstad and Tour Heyerdahl. 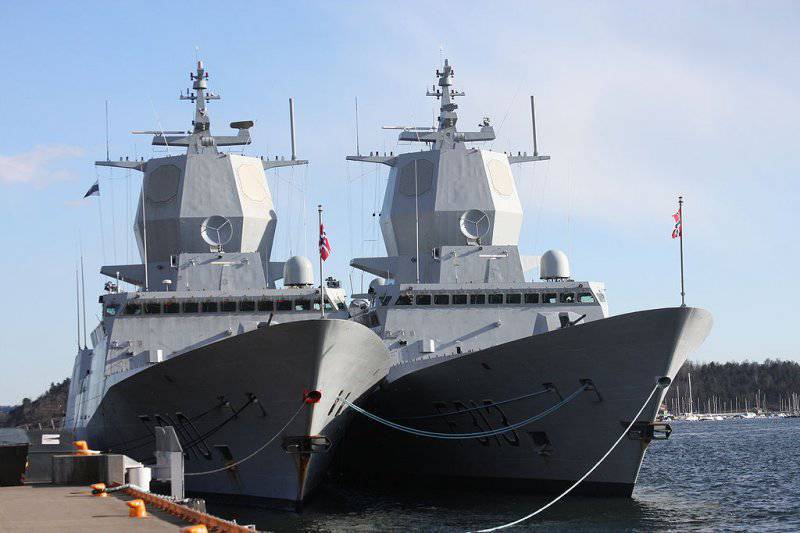 Technically, they are all “budget versions” of Spanish frigates. Combined diesel-gas turbine power plant type CODAG allows ships to develop 26 nodes. Cruising speed at cruising speed is 4500 nautical miles. It is quite decent performance for frigates with a total displacement of 5300 tons.

As for the weapons of Fridtjof Nansen, the main "highlight" of the ship, without a doubt, is the combat information control system Aegis (Aegis) of American production. The main component is the AN / SPY-1 radar with a phased antenna array, which allows the formation of narrow beams in an arbitrary direction without mechanical rotation of the antenna. The absence of moving mechanics and modern electronics allow an arbitrary change in the direction of the radar “look” at intervals of several milliseconds.

The working cycle of the AN / SPY-1 radar is as follows. Most of the time it takes to search when the radar consistently forms a narrowly directed beams, uniformly filling the corresponding quadrant of space. The energy characteristics of the antenna allow you to control the space in the 200 radius miles from the ship (only targets in the upper atmosphere can be detected at this range; below the radio horizon, the SPY-1 radar does not see anything, like all other radars). For each identified target, several additional beams are formed within a few seconds after detection, which determine the speed (by the Doppler method) and the exact direction of motion of the target.
For some targets, a tracking mode can be set, in which targets are irradiated with a radar at intervals of a few seconds. Thus, the SPY-1 radar can take on tracking hundreds of targets automatically.

The computers of the Aegis combat information and control system make it possible to assess the situation and conduct a selection of targets for a few moments. Clearly following the program, Aegis can independently choose the appropriate type. weapons and open fire on the most threatening objects. At the same time, of course, the CICS reports in detail its actions and the decisive word is always left to the person - the operator can press the “cancel” button at any time.
The Fridtjof Nansen type frigate armament complex includes a Mark-41 vertical launcher - one module on 8 cells, each of which contains 4 anti-aircraft missiles RIM-162 ESSM, thus the total frigate ammunition 32 missiles with effective range 50 rocket kilometers . Purely defensive weapons. It is clear that the Norwegians have great savings on weapons - similar in size "Alvaro de Bazan" carries 6 launcher modules Mark-41, i.e. 48 cells.

Another interesting Nansen missile system is the 8 Naval Strike Missle (NSM) anti-ship missiles, a purely Norwegian development from Kongsberg Defense & Aerospace. Of the features of NSM - it is made of radio-transparent materials, and, according to the developers, is able to independently set active interference. The rest is a conventional subsonic anti-ship missile with a launch range of about 200 km. Several types of warheads weighing 120 kilograms, programmable fuses. Compared to promising Russian anti-ship missiles "Onyx" or "Caliber", the NSM seems tiny - less than 4 meters long (for the ZM-54 "Caliber" anti-ship missiles this figure is 8,2 meters), the mass of the Norwegian NSM in the transport and launch container 710 kg (starting weight ZM-54 "Caliber" - more than 2 tons). But the domestic anti-ship missiles are moving in the final section of the trajectory with three speeds of sound.

The artillery weapons of the frigate Fridtjof Nansen are poorly developed. Originally, they planned to equip the 127 mm ship with a universal naval gun, but this idea was abandoned during construction - as a result, Nansen received an 76 mm artillery installation of the OTO Melara 76 mm / 62 Super Rapid. Rate of Fire - 120 shots / min. In principle, cheap and cheerful. Corresponds to the objectives of the Norwegian sailors. 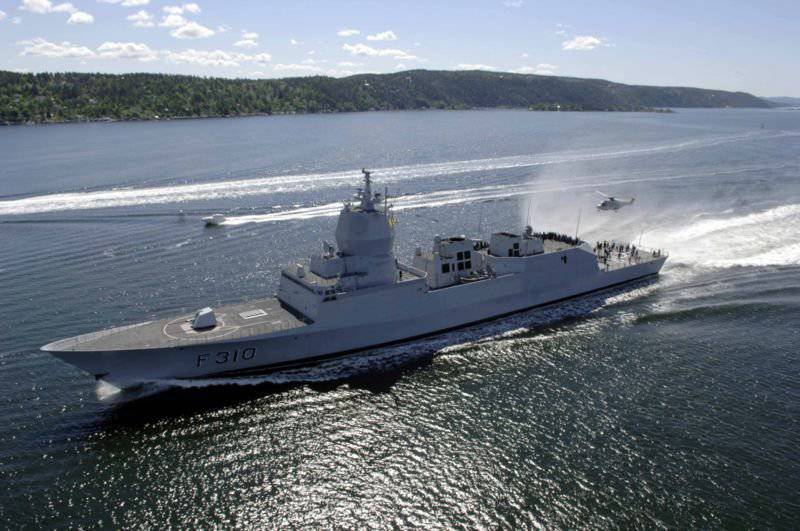 The photo clearly shows how empty the deck of the ship is.

On the ship, the possibility of installing rapid-fire artillery systems "Phalanx", "Goalkeeper" or any other automatic guns in caliber up to 40 mm. Alas, at the moment, none of the "Falanx" is not installed - the ships are armed with systems M151 Sea Protector, allowing you to fight only with pirates and saboteurs. Norway save on matches, we remember as "Fraer's greed was killed." The ship is deprived of any opportunity to fight off the RCC in the near zone. On the other hand, "Nansen" is hardly ever to do it.
The situation with the anti-submarine capabilities of the frigate is much better. The ship is equipped with a helipad and a spacious hangar in the stern. The multipurpose Eurocopter NH-90 is based on the ship as a standard helicopter. For anti-submarine defense in the near field, there is an 12,75-inch (324 mm) torpedo tube for launching Sting Ray torpedoes.
On the "Nansen" set funny non-lethal weapons Long Range Acoustic Device (LRAD), in fact, a noise gun that can scare pirates with an unbearably loud sound. And what, humanely! Right in the style of the European Union. 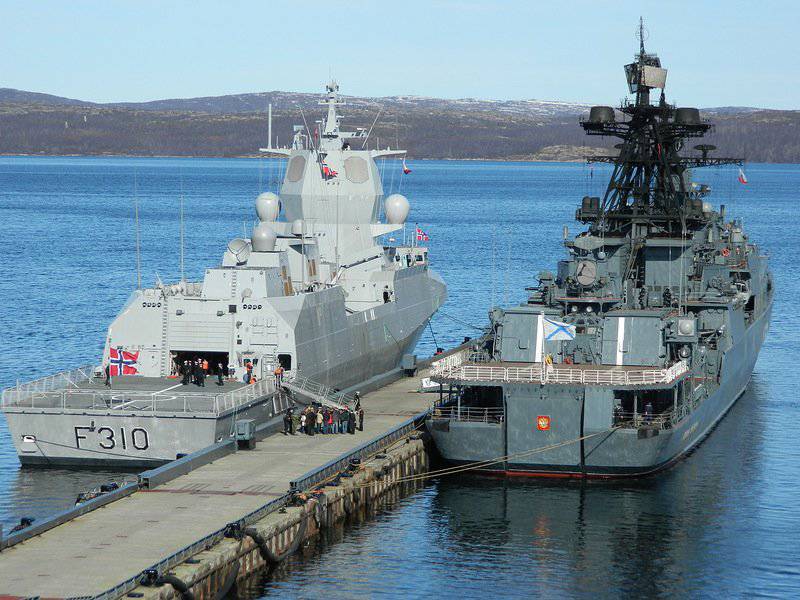 Considering all the above, we can conclude: the newest Norwegian frigates of the Fridtjof Nansen type are modern warships with high combat potential and are able to cope with a wide range of tasks. Some of the project’s weaknesses are not due to technical failures, but financial constraints and the desire to make the optimal frigate for the needs of the Norwegian Navy. "Fridtjof Nansen" - a real European ship beginning of the twenty-first century.